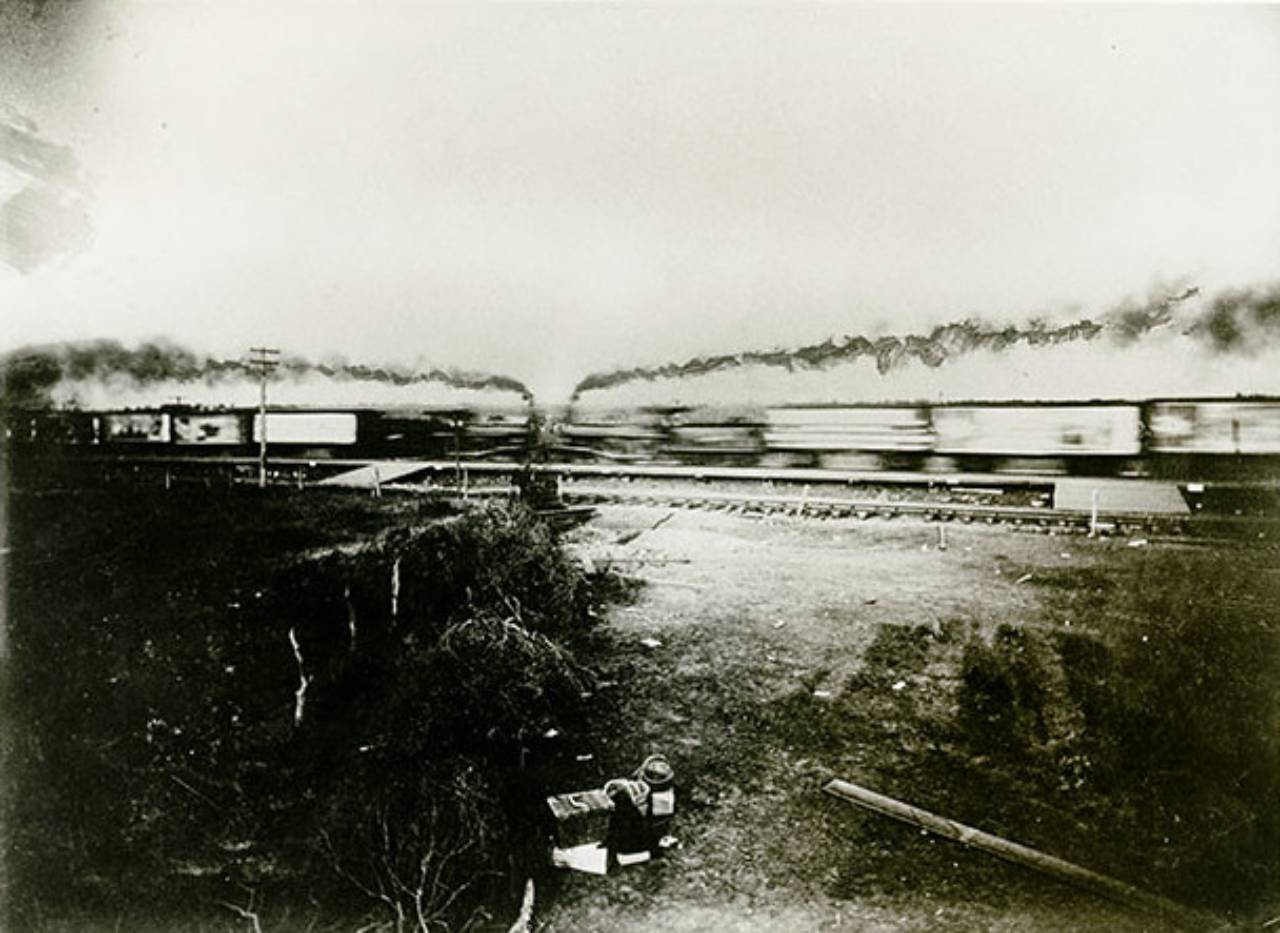 Photograph by Jervis C. Deane of two locomotives at the moment of their head-on collision as part of a publicity stunt in 1896 at Crush, Texas, USA. Deane lost an eye from the boilers exploding. September 15, 1896

In 1896 a promoter for the Missouri, Kansas, and Texas Railway Company, named William Crush, decided to create a sensational “event” by staging a deliberate head-on collision at top speed of the old No. 999 and old No. 1001 steam locomotives. Despite precautions, among the thousands in the audience, several people were killed and many more were injured by the exploding boilers and flying debris. The photographer lost an eye seconds after catching this intentional disaster at the moment of impact.

Since then, the “Great Trainwreck” has become the metaphor of choice for staged annihilation disasters. Today, however, it is being superseded by the “Great Reset” —sometimes hawked in America as Joe Biden’s Green New Deal. This staged disaster will totally eclipse the Great Trainwreck as millions will die if we allow it to proceed.

For some of the oligarchs at its forefront, like Britain’s Prince Charles, an enthusiast of Malthusianism, vastly culling the human population is their stated intent. They believe that humans are simply a higher form of beast, untouched by the divine spark of reason, a herd grown far too large for any form of efficient social control. Others, true believers in the cultish climate religion they have created to promote the event, view themselves as sacrificial suicides on behalf of Mother Earth, a deity more deserving than any hungry human baby. Still other members of this cabal, like the multinational corporations and financiers who support this religion, are utterly oblivious like William Crush, to the actual physics of their beliefs.

The majority of the population, now impacted by this evolving new spectacle, looks on incredulously as the increasingly palpable physical impacts of this staged trainwreck explode into the economy.

Hyperinflation, fed by Central Bank monetary money printing, the planned wipeout of fossil fuels and associated hard commodities, and trillions of dollars in social spending under the rubric of Build Back Better, have begun to make modern life, as we know it, beyond the reach of the average human. The prices of fundamentals—housing, transportation, food, healthcare, energy, are galloping higher by the day. It seems like no one in any of our expensive universities teaching free trade, social equity, modern monetary theory, and similar dogmas and delusional belief systems to the “elites” who now staff our institutions, studied what happened in Germany in 1923. Raining money on a collapsed, make-nothing economy with thin just in time supply chains from far off foreign lands, like the one we experience now in the United States, is a prescription for the disaster we are now facing.

The utterly mad oligarchs and their retainers believe that by wiping out industries, advanced forms of energy, the physical conditions of life for most, while imposing an all-encompassing surveillance state, they assure retention of their power even as their insane and incompetent post 1971 financial system undergoes its final inevitable collapse.

Should you doubt this, just look at the picture emerging before your very eyes. After decades bankrupting and sabotaging necessary global nuclear power development and putting lives of mosquitoes above the lives of people, the final attack has been launched on fossil fuels which powered  industrialization and rapid population growth. Credit for exploration development, and efficient transport of these fuels has been cut off. Only energy systems which are net drains upon society will now be tolerated:  namely, windmills and solar power systems. According to their vision, this will shrink the world’s population down to minimal numbers and leave the survivors at the lowest possible levels of development. Since there is no way that this infrastructure platform can sustain the present population of the earth, millions will have to die.

For surface transportation you may be permitted to own an electric vehicle. But whence comes your electricity? Perhaps a hydroelectric dam could be used. No! Dams are an affront to Mother Nature and must be demolished.

Aviation fuel refined from oil is to be replaced by “Sustainable Aviation Fuels.”  But such fuels are derived from coal or natural gas—both of which are to be shut down.

For home heating you may not use coal, oil, or natural gas. You may cut down trees for firewood, but that will be prohibited as well.

Whatever still exists of agriculture and industry is to be cut back to a regime of handicrafts, animal, and human manual labor. As the process proceeds, those extraordinarily rich oligarchs will make a killing in the short term on the fossil fuel spot markets while gaining ultimate ownership of remaining assets in the long term.

One way or the other, either by physical shortage or hyperinflationary pricing, you will be left to freeze to death in the dark.

The plotters are primarily British, European and American oligarchs and their financial retainers.

To this fascist apparatus, the American Revolution was a disaster from which they are still attempting to recover. That revolution was outright heresy to their belief system. Since it embraced the idea that all humans are made in the image of God and are endowed with the divine gift of creativity—the ability to alter nature for purposes of human prosperity—America became the enemy. Its idea had to be eliminated or subverted at all costs.

From Philadelphia in 1776, through the declaration of the Monroe Doctrine, to Lincoln’s Emancipation Proclamation, to the Bretton Woods system of stable finance and economic development projects following the victory in World War II, to President Trump’s UN declaration that “the future belongs to the patriots, not the globalists,” there has been a continuous battle between those who would free individuals to be able to develop themselves and pursue their “happiness” versus the imperialists determined to cull and reduce populations to impotent submission.

American System methods imperfectly applied over four centuries in North America have replaced the oligarchical system of servitude with canals, transcontinental rail systems, electrification, clean water, road, air, and space travel in much of the world. When freed from imperial suppression and allowed to pursue what Cotton Mather called the “freedom to do good,” Americans have proven a boon to all humanity.

There are also good people, powerful nations, and institutions which, though unable to stand up against the plot on their own, are hoping for the revival of the real United States so that they could join us in finally overthrowing the British Imperial “elite” and all its suicidal ideas about the nature of human beings. As Lyndon LaRouche repeatedly emphasized, only the United States, based on its Constitution and organization has the power to cause this staged annihilation disaster to collapse upon itself. President Trump had pulled us out of this trap and put the United States back into the role of the world’s largest energy producing nation.

As he has stated many times, the honest, inspired, caring, better-future-building Americans are the real elite.

A new Congress in 2022 can Constitutionally create all the necessary credit (not money) to restore the coal, oil and gas exploration and development process. A new Congress can restore the National Bank and the necessary regulation of our banking and financial system to remove it from oligarchical control and put it back into the harness of the national interest. Even more important, a new Congress can put the national credit behind the rapid development of modular fission reactors for massive factory production of the expanded electrical grid needed immediately here and across the world. Still today, a billion people lack electricity and clean water. With national credit these people become our customers.

A new Congress can put national credit behind the development of the fusion and space technologies which will transform the future of our children and grandchildren for the better.

Join us in making this a reality.