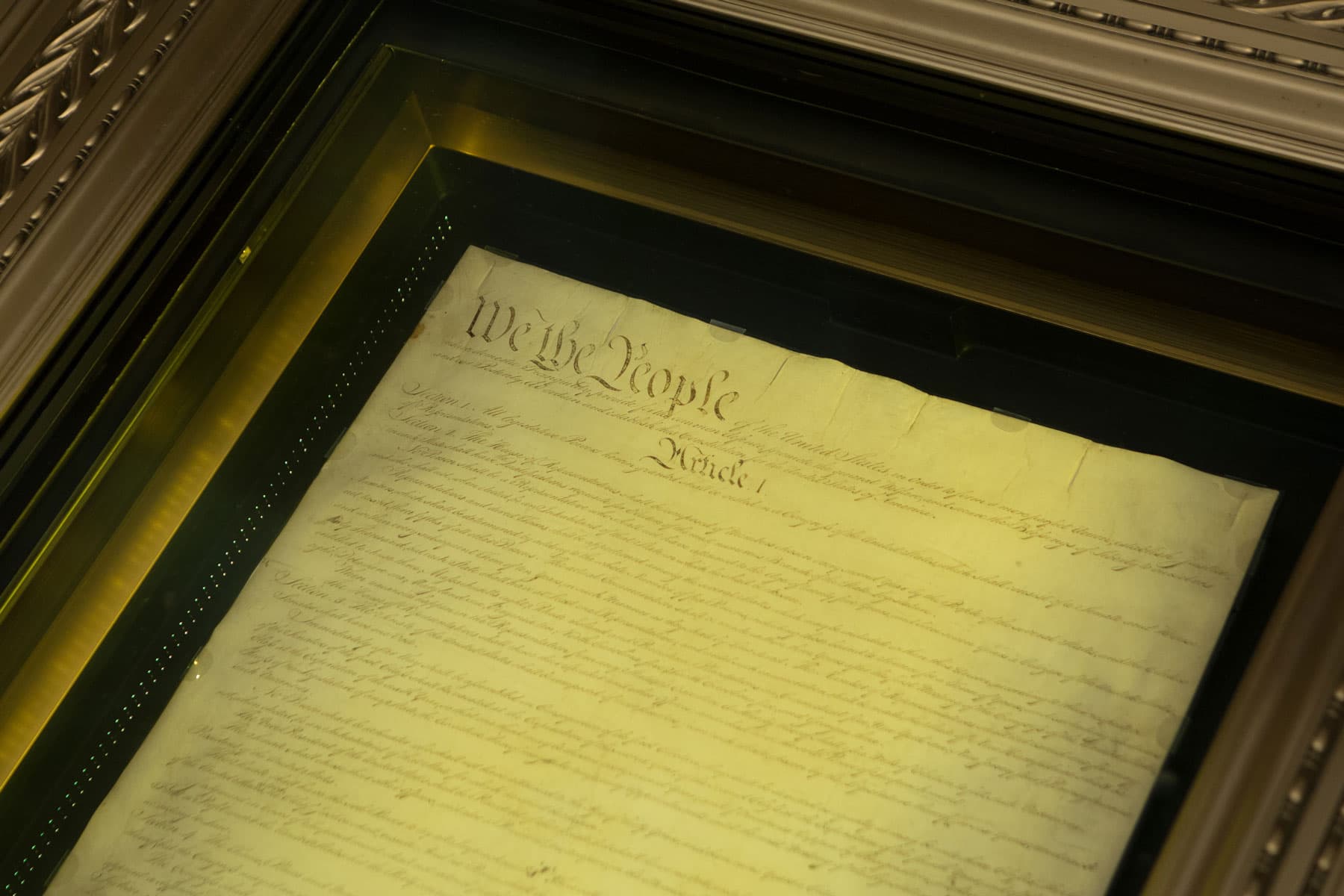 Page 1 of the Constitution in its encasement in the Rotunda for the Charters of Freedom at the US National Archives.

“Strong, sovereign nations allow individuals to flourish in the fullness of the life intended by God.”

In January of 2023, we find ourselves in a world that is changing with bewildering speed. Nothing is standing still.  The War in Ukraine escalates.  The global economic crisis worsens.  Unprecedented political and social upheavals erupt everywhere.  In Washington, DC the new Congress is meeting to debate solutions for the economic and social ills ravaging America.  The entire world seems poised on the brink of the unknown.

Within these cascading events, at the highest level of policy-making, a debate is now taking place about the future of the world and the nations and peoples within it.  A great deal of attention focuses on the ongoing collapse of what some call the “American Empire.”  Some of the pronouncements are predictable.  Eager leftists are salivating about the demise of what they call “U.S. economic and military hegemony,” also called the “unipolar world.”  What is now being discussed, almost everywhere, is that American power is crumbling and we are now entering a new strategic era of a “multi-polar” world, where no single nation will be able to dictate economic and military terms world-wide.

The problem with this analysis is that the entire discussion of a “Unipolar” versus “Multi-polar” world is fraudulent and rigged.  You are being presented with a make-believe picture of two opposing scenarios, neither of which is legitimate. Worse, the most important issue confronting mankind, the indispensable key to future human progress and happiness, is never mentioned.  I am speaking of National Sovereignty.

Sovereignty is widely misunderstood.  Any valid notion of sovereignty starts from a recognition that the true concept of sovereignty begins with Genesis 1 and the United States Declaration of Independence.  God created Man in His own Image; distinguished Man from all other creatures; and bestowed upon Man creative dominion over the entire earth.  The Declaration of Independence asserts that all men and women are created with Inalienable Rights to exercise the noetic powers given by the Creator, and announces the birth of a sovereign Republic based upon the sovereign rights and powers of the individual citizen.  National Sovereignty flows from this recognition of the sovereign creative individual.  All competing definitions of sovereignty are drivel.

All human progress—from the ancient beginnings of our species—has been the product of creative discoveries accomplished by human individuals.  Such acts of creation are always the product of individual human minds.  What the Declaration of Independence and George Washington’s later U.S. Constitution accomplished was to establish a Republic coherent in principle with the sacredness and creative potential within each individual citizen.  The government of our Republic is charged with protecting the Future of the nation.  Through Representatives and a President elected by the people, the government acts to secure the future by fostering a culture of scientific human advancement.  Each life is sacred.  The creative spark of creativity which lies as a potential within each citizen, is nurtured.  The government exists for the People, because it recognizes the true nature of the human identity.  Conversely, the creative accomplishments of the People—think of Edison, Westinghouse, the Wright Brothers and many others—then ensure that the Republic will endure and our civilization will advance.

In a sovereign Republic, no outside power—be it a foreign nation, a private financial cartel or a corrupted intelligence community—is allowed to usurp the power of government to prevent elected officials from honoring their Constitutional obligations on behalf of the people.  Such attempted sabotage is un-Constitutional at best, treason at worst.  Thus, drug trafficking is a national crime that the Republic can not allow.   A government which tolerates the mass drug addiction of millions of its youth has surrendered all claims to sovereignty.

A commitment to these Constitutional principles must define our relationships with other nations.  The Republic of Washington and Lincoln does not seek power or prosperity to the detriment of other peoples.  America’s destiny is to be the Beacon of Hope to mankind.  Yes, we defend our sovereignty and sometimes this requires confrontational negotiations, but we also do not carry out drone attacks or impose ruinous economic sanctions against nations with whom we are not at (Constitutionally-declared) war.  We seek partners, not enemies.

America’s historic foreign policy outlook was defined by George Washington in his Farewell Address, and was later best expressed by John Quincy Adams in his call for a “Community of Principle” among perfectly sovereign nations.  We operate from the outlook of truthful principles about the Republic and the human individual.  We seek cooperation with other nations based on those principles.  We honor those principles both at home and abroad.

Today, however, the key threat to our national sovereignty does not involve our relations with other nations, but rather the surrender of our sovereignty to private oligarchical financial interests.  Since the 1990s what has come into existence is a global financial/corporate octopus of enormous power—outside the control of any government.  This financial oligarchy has waged war against the people of every nation—including the people of the United States—for the last 30 years.  They have destroyed our energy grid, our water grid, our farms, and our manufacturing base.  Their agenda will kill billions.  The individual citizen is powerless—as an individual—to defeat such an enemy, but our sovereign government does have that power, if it chooses to use it on behalf of the people.

This financial oligarchy now controls our mainstream news media, much of our intelligence community and most of our higher educational institutions.  They operate through a multitude of foundations and non-profit organizations to control all policy discussions.  With the arrogance of Ozymandias they assert their power to control the nation’s destiny.

The Oligarchy’s Definition of a Multi-Polar World

Much of the talk of a multi-polar world ignores the existence of this anti-human financial oligarchy, this new version of the British Empire.  Instead, the focus is axiomatically anti-American.  It starts from the lie that it has been the “American Empire” which has imposed murderous economic policies throughout the world.  It refuses to admit the glaringly obvious reality that the United States itself has been a victim—and from the standpoint of the oligarchy the primary intended victim—of this global financial regime.  Within the imperial oligarchy, the weakening and destruction of American economic sovereignty and productive power has been a long-recognized prerequisite to carry out a radical revolution in world affairs.

If one examines the transcripts of speeches delivered at the annual summits of the World Economic Forum over the recent several years, the proposal for a “multi-polar world” is endorsed again and again and again, by speaker after speaker after speaker.  It is a key component of Klaus Schwab’s “Great Reset.”  Why is the WEF pushing this?  Only a complete fool would posit that the WEF and the extensive network of private oligarchs and elites associated with it, are “communists” or agents of China.  The elites who gather at Davos are an entirely different breed of animals.

Take a look at the next summit of the WEF—titled “Cooperation in a Fragmented World”—which will take place later this month at Davos.  According to the WEF website, the meeting will bring together 2,700 leaders from 130 countries including 52 heads of state.  The majority of participants will be from the Private Sector, including 1,500 business leaders, among whom will be 600 of the world’s top CEOs.  Leading bankers and financiers will also attend, as well as more than 125 leaders of major universities, research institutions, and think tanks.

The shared commitment of this crowd is that American sovereignty and power must be diminished, if not obliterated, making possible rule of the world by a PRIVATE cartel of banks, financial institutions and mega-corporations.  It is they, the imperial elite, who will set policy—on the green agenda (the COP conferences), banking & finance, and world trade.  Individual nations with their chimerical “sovereignty” will obey the diktats handed down to them.  What is envisioned is a privately owned-and-run imperial system.  This is Klaus Schwab’s notion of a “multi-polar” world, one in which all nations will supposedly be represented, but none will possess true sovereignty.

At the same time, the aspirations of these oligarchical ghouls are not simply economic or financial.  Under the green agenda, the trans-genderism and the drug legalizations—all supported by the media outlets of the oligarchy— the moral and philosophical principles of human civilization will be extinguished.  That is the plan.

The Fight in the United States

A revelatory glimpse into the nature of National Sovereignty has now become possible through the recent publication of the Twitter Files and the accompanying discussion of the relationship between the Intelligence Agencies (FBI, CIA, Homeland Security, etc.), the mainstream media and the Silicon Valley tech companies in their joint effort to exterminate free speech and control all political discourse within the United States.  Ask yourself:  What is going on here?  This is not an assault by a foreign nation against the American people.  It is coming from the trans-Atlantic ruling elites, backed by the New York Times and other mouthpieces for the oligarchy.

We are at a very dangerous moment.  Certain recent developments, such as the decision in the House of Representatives to establish a select Committee to investigate the intelligence agencies, the recent breakthrough in fusion energy and the successful Artemis mission to the Moon, are all very promising, but if we are to navigate our way successfully through this crisis, the first requirement both for the American People and for struggling nations throughout the world, is to recognize our common enemy.  The enemy is a private financial empire, just as the British and Dutch East India Companies were private financial empires.  Just as the British-created Central Banking System is a private financial empire.

Recognize also that the Principles which created our Republic, which often lie dormant and unrecognized, can be revived and brought back to life as Abraham Lincoln proved.  The United States Constitution provides for our Republic awesome powers to defend the people, to develop the nation and to provide for the future.  Our newly-elected members of Congress have taken an Oath to uphold that Constitution.  It is our job, as citizens, to see that they honor that Oath.