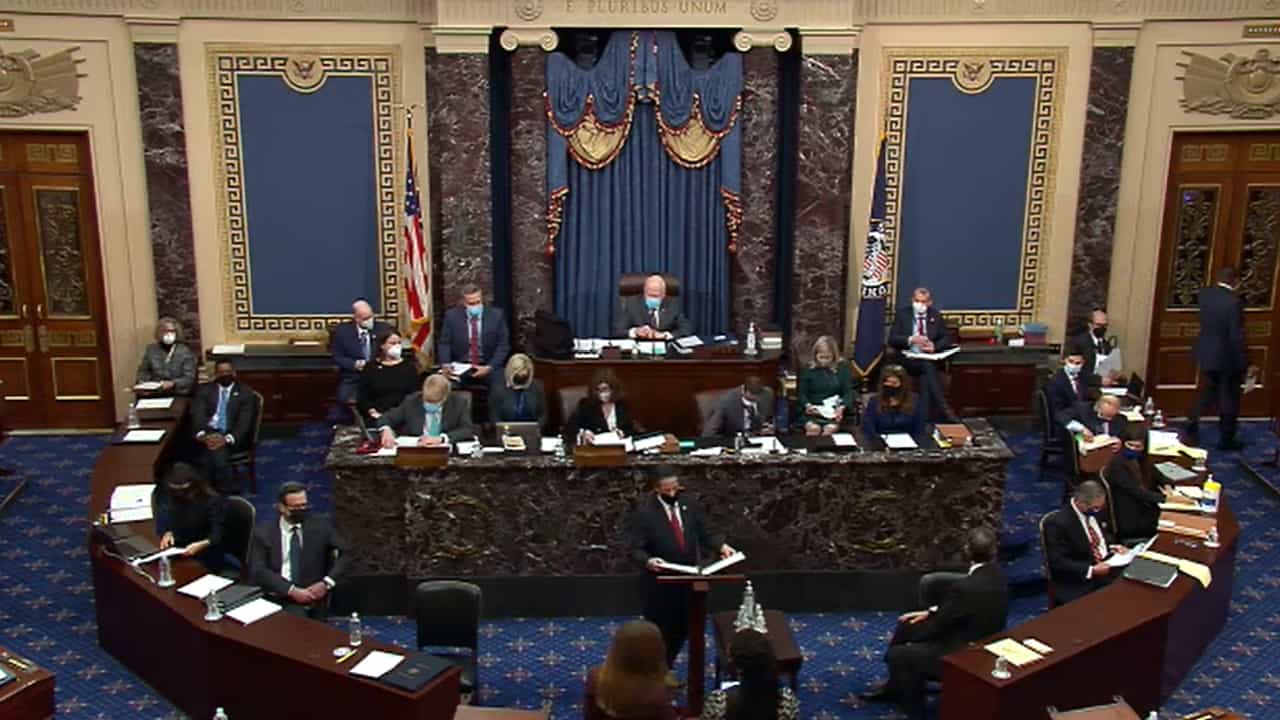 On Thursday, the House Democrats finished a three-day brainwashing session aimed against the American people, defiling the historic U.S. Senate chamber with an attempted public crucifixion of Donald J. Trump. The President’s lawyers will present his defense today, Friday.

In their final day of presentation Thursday, the Democrats, in effect, conceded that Trump’s words at his rally on January 6th, did not incite the subsequent riot at the Capitol–the central charge in the faux impeachment. They spent the whole day in a litany of their favorite hate memes about Trump, reaching back frequently to their favorite one: “Trump the racist and crude misogynist.”

All of this was done without reference to officer Brian Sicknick. That was because the major incendiary falsehood of impeachment–that Trump supporters bashed in Officer Brian Sicknick’s skull with a fire extinguisher, after being incited by the President–was exposed as false in media coverage throughout the day on Wednesday.

Officer Sicknick never mentioned the fire extinguisher in a post-riot text to his brother, sources say the autopsy report doesn’t show any trauma, and there are now reports that the feds are exploring a possible bear spray reaction as the cause of the stroke Sicknick apparently died from, despite the fact that bear spray is not known to kill people or cause strokes (more coverage here). It appears likely that the House impeachment managers already knew this claim was false when they repeated it as a central feature of their trial brief.

So, once again, the well-known, out of context quote about Charlottesville was trotted out and fondled, despite the fact that it has been shown to be outright fakery time and time again (as shown here).

Then there was a whole lot of talk about the plot to kidnap Michigan Governor Gretchen Whitmer by a clearly FBI-infiltrated group of mentally challenged people.

The gist was that Trump engaged in a pattern of incendiary conduct, including the BIG LIE about the existence of vote fraud, with the riot at the Capitol a foreseeable result. That is nowhere near the crime of incitement and Trump’s actual words at the rally before the riot totally contradict any intent to cause a riot. He instructed the crowd to peacefully demonstrate at the Capitol. Of course, the second intended casualty of this travesty is any real investigation of the theft of an American presidential election, attempting to make any honest investigation the equivalent of the new third rail in American politics.

There were no witnesses or any exploration of actual facts in this show trial. In fact, the only witness statement was by Utah Senator Mike Lee, who took to the Senate floor on Wednesday to demand that the Democrats’ account of a telephone call from President Trump, which he personally witnessed, be struck from the record as categorically false. It was struck after Senator Lee’s protest.

There are lots of other things intended to be buried here. How many rioters actually entered the Capitol? Any viewing of the numerous videos certainly does not record the “thousands” claimed endlessly, and only 200 have been arrested after a relentless nationwide manhunt which included anyone who simply trespassed. Who was responsible for the clear take-down of security at a point where everyone in law enforcement had forecast violence? Rep. Devin Nunes is pointing his finger right at Speaker Nancy Pelosi, who seems busy buying silence from Capitol police by endlessly publicly honoring them.

The President stands impeached for what amounts to hot rhetoric and failing to take strong enough actions, in the view of his enemies, to get the rioters out of the Capitol by telling them more forcefully to stop. This, despite his efforts to actually get his supporters out of the Capitol by telling them to stop while, sin of sins, expressing some sympathy for their anger about a stolen election.

But if the riot was being run by provocateurs, as seems likely, what impact would “stronger” statements have? If the rioters immediately stood down, would that not show that they were under his control when, in fact, they were not? What about the Democrats who not only did not condemn the Antifa and nihilist terrorists who burned down and looted major American cities throughout the summer, killing lots of cops, when, in fact, they actively encouraged them and demanded that all police be defunded. The newly installed Vice-President of the United States, Kamala Harris, actually bailed these rioters out of jail.

Typically, the Democrats’ answer to any real exploration of reality is to escalate and attack with new and completely outrageous and unfounded charges. Senator Sheldon Whitehouse, one of the most deranged among them, claimed Thursday, that Senators Josh Hawley and Ted Cruz must have been in on the riot, possibly opening doors for the rioters, and referred both Senators to the Ethics Committee for investigation.

The Democrats used a Hollywood production company and a law firm to produce a propaganda film shown over and over again of rioters attacking police at the Capitol, along with footage of fleeing members of the House and Senate and a fleeing Vice-President Pence. They used focus groups throughout to adjust their presentations in order to dial up rage and hatred against President Trump and to shame his supporters.

Republican Senators, the Democrats seemed to fantasize, might change their votes about a completely illegal and unconstitutional procedure if they were forced to relive the trauma they and their staffs suffered on January 6th for three full days. And, the thirteen minute slick video with which the House managers opened their case did provoke press commentary about the desired emotional reaction from some of Mitch McConnell’s acolytes, like Senator John Thune. But, again, this is not about the outcome, which 44 House Senators have already declared an unconstitutional outrage. It is about publicly crucifying Donald Trump for a riot which arrest documents and investigations show had been pre-planned extensively for months by the Proud Boys, the Oath Keepers, members of the Pravy Sektor from Ukraine, members of Antifa, and other groups totally and completely infiltrated by the FBI and other intelligence agencies.

None of this will work. In 2009, Lyndon LaRouche talked about the mass strike then occurring around Obama’s bank bailouts and healthcare monstrosity. He said the fault was that people complained to their Congressmen and Senators in the strongest terms but failed to say, “You’ve failed. We’re taking charge now,” while qualifying themselves to do so. That process has now already begun and it will not be stopped and therein lies the true source of Democrats’ hysteria.