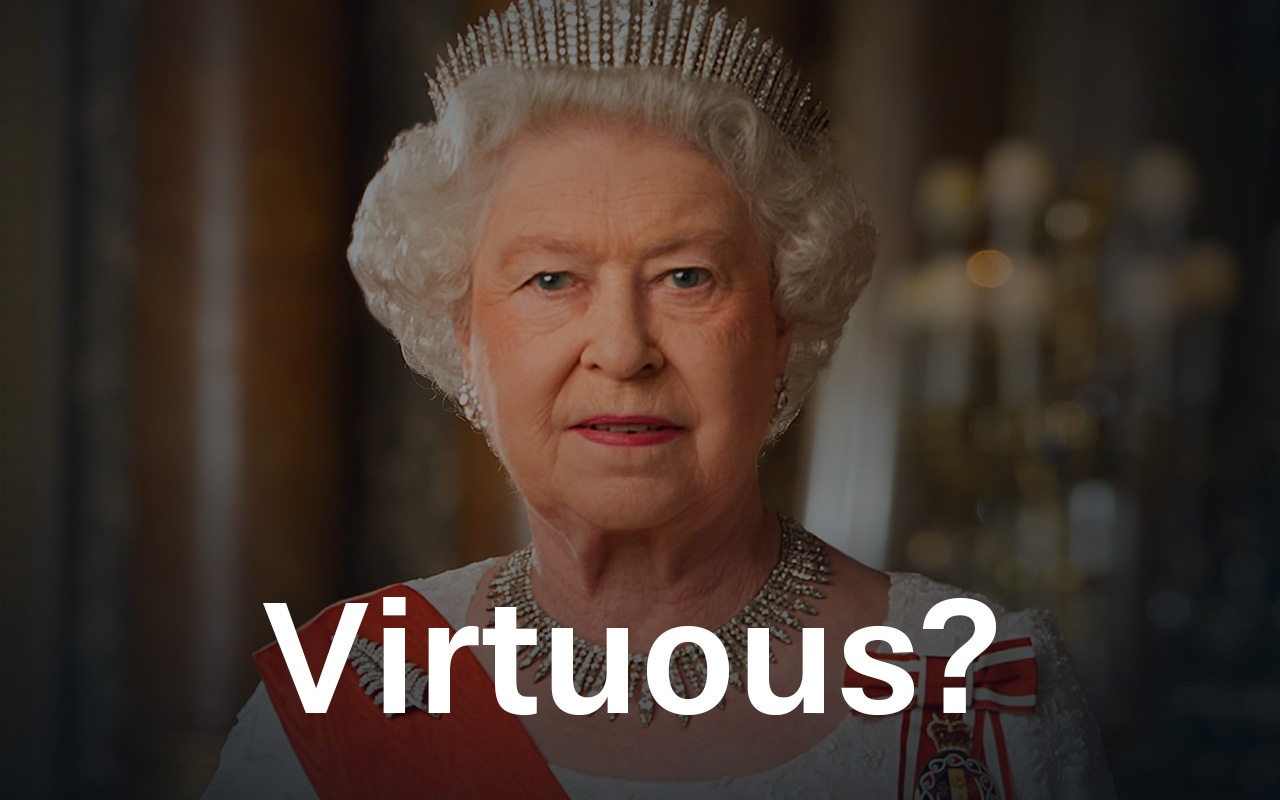 An Opinion Piece by Robert Ingraham

Shocked is one word to describe it.  Flabbergasted is another.  Dismayed is perhaps too weak of a response.

I am speaking of my reaction to witnessing the spectacle of “conservative” politicians, news commentators and academics falling over one another with slobbering praise for the British monarchy in the wake of the death of Elizabeth Mountbatten-Windsor.

Some of this servile aristocrat-fawning is not surprising.  Joe Biden ordered all U.S. flags to be flown at half-mast, and the British Empire-loving Hillsdale College for once has found common ground with Joe.  They both love the British monarchy.  As part of well-heeled British propaganda efforts, the American public has been barraged with soap opera portrayals of the royals and Elizabeth in films, television mini-series, endless gossipy books, and humorous skits, such as Elizabeth’s tea with Paddington bear.  These are all designed to appeal to the girls of a former time, endlessly playing with crowns and tierras at the very limits of their immature fantasies and imaginations.  The propaganda makes these evil relics appear, well, almost human. But the response of some others is disheartening to say the least.

On the day of Elizabeth’s death, Tucker Carlson, in what was arguably his worst broadcast ever, devoted an entire segment, not only to honor the Queen but to extol the “virtues” of the British Empire, asserting that Britain “ruled over the world with decency unmatched in human history.”  For several days, Rupert Murdoch’s Fox News ran a non-stop series of reports and features praising every aspect of the House of Windsor, including a ridiculous lengthy dialogue on their popular show “The Five.” In intensity, Fox’s barrage more than echoed its buildup for the genocidal Ukraine war against Russia.

But it goes on from there.  Websites such as “The Last Refuge,” “American Conservative,” “American Greatness,” and others disgraced themselves with trash commentary, such as “Elizabeth II’s long reign comprised class, grandeur, patriotism, and service. . .  She was a symbol of stability in uncertain times and a fighter for freedom,” and  “Charles III was a good prince, and will be a good king.”  Other websites and publications that self-identify as “American Patriots” chimed in with similar drivel.

Oh, what fools some Americans can be.  Have they forgotten the December, 2018 House of Lords Report which demanded that Trump be denied a second term, no matter what it took?  Has it slipped their minds that it was MI6's Christopher Steele and Richard Dearlove who concocted the “Russiagate” hoax, leading to Trump’s 2020 impeachment?  Aren’t they paying close enough attention to notice that it has been the British government which instigated and is continuing to push for an escalation of the Ukraine War, which can only result in a U.S.-Russian military confrontation?

What Would Our Predecessors Think?

In 1851, the great American economist and advisor to Abraham Lincoln, Henry Carey, wrote:

“Two systems are before the world. . .  One looks to pauperism, ignorance, depopulation, and barbarism; the other to increasing wealth, comfort, intelligence, combination of action, and civilization.  One looks towards universal war; the other towards universal peace. One is the English system; the other we may be proud to call the American system, for it is the only one ever devised the tendency of which was that of elevating while equalizing the condition of man throughout the world.”  (Harmony of Interests)

Henry Carey, Abraham Lincoln, George Washington, John Quincy Adams and other American patriots were not confused as to the unbridgeable moral gulf that separates the principles of the American Republic from the imperial appetites of London.  George Washington was explicit in his writings and actions that the American Revolution was not merely about “separation from Britain,” but had as its intention the creation of a Constitutional Republic hostile in every way to the axioms of the British Empire.  During the Civil War, Britain attempted to bankrupt the United States and provided the vast bulk of the arms and ammunition to the Confederate Army.  We came very close to declaring war against Britain between 1861-1865.

Another disgusting sub-current within the present hand-wringing over Elizabeth’s passing is clear sympathy, by some, for what might be called “Anglo-Saxon solidarity.”  This has been a treasonous undercurrent in America for some time, as seen explicitly in D.W. Griffith’s Birth of a Nation.  How un-American!  The American Republic is not defined by race but by the principles and sentiments enunciated in the Declaration of Independence and U.S. Constitution.  That is what makes us unique.  That is what is glorious.  We locate who we are within the God-given spark of reason which resides within each of us, something which Elizabeth, Philip and Charles deny the existence of.

Tucker says that the British Empire “ruled over the world with decency unmatched in human history,” yet London ran the global slave trade for more than a century, forcing hundreds of thousands of slaves on the un-willing American colonies.  The British Empire created global narcotics trafficking, fighting two wars to subjugate China and turning whole regions of India into gigantic drug plantations.  According to the last pre-war Report issued by the League of Nations, London still held an iron-clad grip on international drug trafficking in 1939, and today, a huge chunk of global drug financing is still conducted through the Cayman Islands and other “off-shore” loci within the British Commonwealth.  Lyndon LaRouche insisted, “The Queen Pushes Drugs.”  Anyone who disagrees with that is simply ignorant of basic history.  It is conclusively documented that, in a span of  300+ years, the British Empire was responsible for deaths of more human beings than any other regime, ruler, or nation in human history.

Then there is the case of Elizabeth’s deceased husband Philip Mountbatten.  A founder of the genocidal World Wildlife Fund, Philip devoted the last 40 years of his life to killing as many human beings as possible.  Anti-science, anti-progress, royally privileged from birth, Philip is rightly described as one of the “godfathers” of today’s Malthusian greenie movement.  Many conservatives condemn Biden’s Green New Deal, but refuse to acknowledge that it was the British and Dutch monarchies which created the modern “Green” movement.  These oligarchs are fanatical apostles of the very Green ideology which will kill billions of people through technological attrition. Such has been the population and mind control methods of empires since Rome.

Today, Philip’s predilections have been inherited by his demented son Charles, who has spewed out his anti-human rants at every opportunity. Just watch a few of Charles’ speeches at Davos.  For Charles, as well as Philip and Elizabeth, human beings are a plague, and they have said so publically.

These hereditary aristocrats view the rest of us as disposable underlings.  The new King Charles demands that his shoelaces be ironed by one of his many servants.  Another servant delivers to Charles every morning a toothbrush with ½ inch of toothpaste already applied, so that Charles does not have to touch the toothpaste tube.  Reportedly, his staff is also required to pack up and bring Charles’ personal toilet seat and Kleenex Velvet toilet paper whenever he is going to visit anyone outside the palace.  Evincing his gratitude to the servants who have done this for him day in, day out for decades, he is firing all of them now that he is moving into his mother’s house and inheriting her servants. He served them notice within hours of Elizabeth’s death.  The royals are pampered creatures, much like entrants to a London dog show.

Many people today speak of “the elite,” “the oligarchy,” “the deep state” and other terms which recognize that our government has been subverted by powerful interests.  But what most have failed to grasp is that the enemy we are fighting today is the same we battled in 1776.  London has been the capital of the global financial Empire since 1688.  In the 19th century, the British created a world-wide Central Banking System—antithetical in every respect to the U.S. Constitution—for the purpose of perpetuating global financial oligarchical rule.  London remains the capital of that financial empire in 2022.

The British empire is not some quaint relic of the past;  it is a monster and evil world power.  The extended monarchy is better understood as a monopolistic firm.  Through what some have dubbed the “Club of the Isles,” the monarchy currently controls vast resources in precious metals, real estate, strategic raw materials and energy.  The Monarch is not some figurehead who just invites friends over for tea and conducts photo-ops at charity events.

Perhaps the best example of how an American President should respond to British manipulations was President Dwight Eisenhower’s actions during the 1956 Suez Crisis.  British Prime Minister Anthony Eden, together with the degenerate French Fourth Republic and the State of Israel launched an all out military invasion of Egypt over control of the Suez Canal.  With the deep-state Anglophile John Foster Dulles heading the U.S. State department, the British and French counted on U.S. backing.  But Eisenhower intervened forcefully to defend Egyptian sovereignty and stop the military invasion.  At his direction, a Resolution was passed at the United Nations condemning the attack (with only Britain, Australia, New Zealand, France and Israel voting no); the IMF, at Eisenhower’s insistence, denied emergency loans to a near-bankrupt Britain;  and other actions were taken as well.  There was no British-American solidarity.  Or, you might study FDR.  He refused to cow tow to the monarchy, inviting them to Hyde Park and serving them hot dogs while calling them by their first names.  After the war it was his declared intent to end the British Empire forever.  He died before he could accomplish that goal.

None of what has been stated so far in this offering is a matter of simple “history.”  We are now confronted with the deepest crisis in more than a century.  Both Europe and America are plunging over the cliff into an unprecedented economic collapse.  Britain, together with its American fifth column, are escalating the Ukraine War.  The DOJ and related intelligence agencies are fanatically determined to imprison Donald Trump and as many of his allies as possible.  The future of free elections is in doubt.  American citizens are being driven downward into no-hope poverty.  This is a war for survival, and the British monarchy is on the other side.

Mourning the death of the British Queen.  Are we that deluded?  Have we become that debased?  It is perhaps quaint and amusing to watch BBC productions of the “Upstairs/Downstairs” British class system, but we must never lose sight of our real heritage, a heritage which separates us, for all eternity, from that oligarchical outlook.