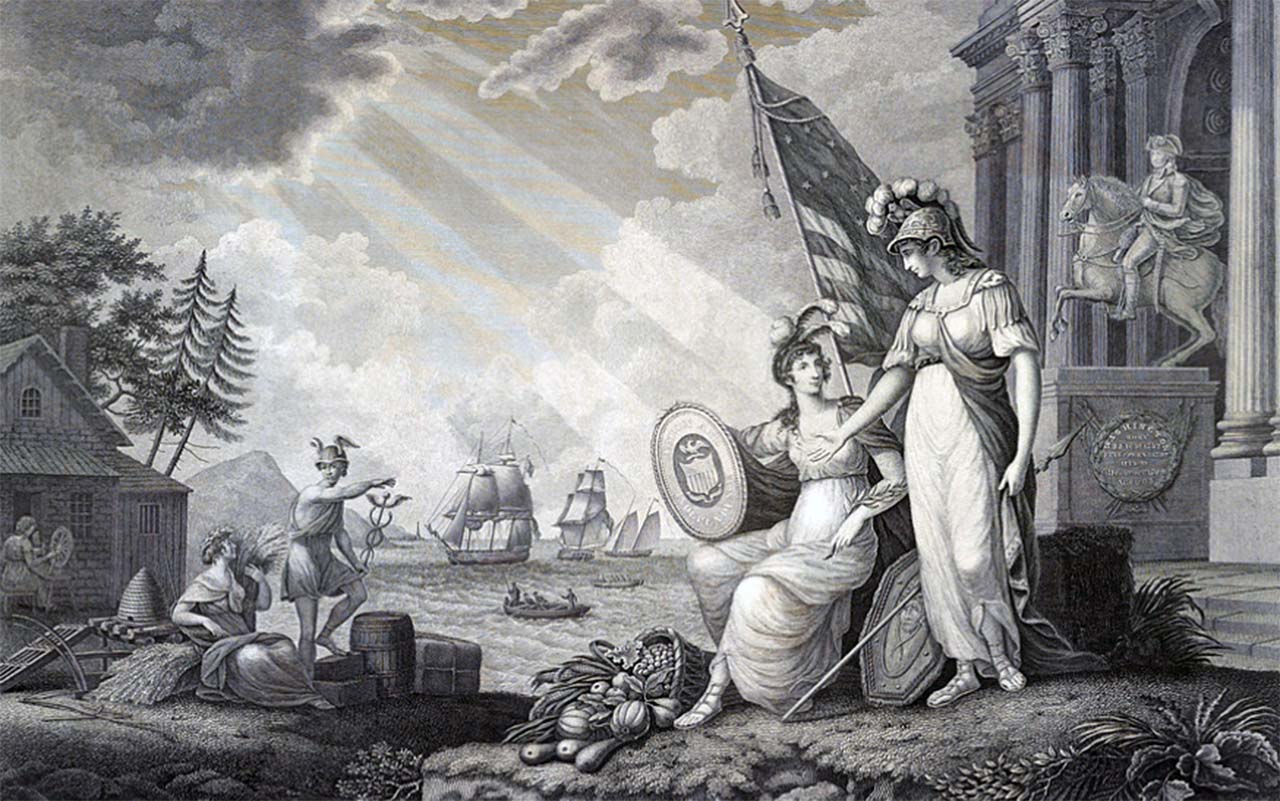 America guided by wisdom An allegorical representation of the United States depicting their independence and prosperity / / Drawn by John J. Barralett ; engraved by B. Tanner. 1815

This article is the seventh in our new campaign, "The Decisive Battle in the War for the Republic, Put the Fed Into Bankruptcy; Create the Third National Bank."

Consider the truth enunciated in our Declaration of Independence that we, as a people, are endowed by our Creator with the inalienable right to the Pursuit of Happiness.  Pause for a minute—and consider the meaning of the concept Happiness.  In former times, in a healthier culture, happiness was understood by earlier generations of Americans to signify faith in the creation of a better future; that we shall leave a more productive society, with more opportunity, for our children, and they, for their children.  Happiness signifies a belief and a commitment to upward human progress, a human culture in which we are all free  to contribute, each in his or her own way, to the creative development and betterment of society.  Happiness.  Faith in the future.  The right to contribute to the creation of that future.

What is, perhaps, not obvious to most people today, is that this idea of a culture based on human happiness is a product of the 15th century Italian Renaissance.  For most of us, when we think about the Renaissance, the immediate mental images are the great artistic works of Leonardo da Vinci, Raphael, and others, or perhaps the awesome works of architecture, such as the great Dome of Florence.  But there is something else to consider, a half-obscured Renaissance accomplishment, but one which has critical importance in the fight to save our beleaguered Republic today.

Beginning with the life mission of Dante Alighieri, and continuing for more than 150 years after his death, a debate raged in Italy, as well as other parts of Europe, as to how to organize society, how to discover the appropriate political and economic means such that human creative potential might flourish.  Such that human beings might actually live like human beings.  The old rigid strictures of feudal society had imploded in the nightmare of the Black Death.  The oligarchical system of serfs (slaves) and lords had disintegrated.  New breakthroughs, not only in art and music, but also in science and technology heralded the dawn of a new potential for a technologically progressive society, for upward human progress.  And these breakthroughs and discoveries also made self-evident the truth that every human individual, no matter what station, possessed dignity and the ability to contribute creatively to society.

This crisis of opportunity produced two initiatives.  First, certain rulers, beginning with Louis XI of France and Henry VII of England, expelled the Lombard bankers who had imposed a reign of trans-Alpine financial usury during the preceeding centuries, and these rulers began to establish sovereign control over their own financial and economic institutions.  This was the beginning of the sovereign nation state, and it was an invention which flowed from the Renaissance.

Second, Cardinal Nicholas of Cusa, together with his allies, declared that government which served the interest of an elite aristocracy had no legitimacy, and proposed that sovereign government must be based on a commitment to the Common Good of all of the people.  Cusa called such a government a Commonwealth.

It would take a long time before the full realization of this new concept of government would be accomplished, but between 1775 and 1789 the American Republic was created, and, here, for the first time, we find a sovereign nation—a Republic—dedicated to the happiness of its citizenry.  National Sovereignty acting on behalf of the Common Good, was enshrined in the U.S. Constitution, with its charge that the sovereign nation must protect and defend the General Welfare of the citizenry and their posterity.

In the 15th century the most powerful empire in Europe was not found in Britain, France, or Spain.  The Venetian maritime and financial empire was the dominant imperial power of those decades and would remain so until the emergence of the trans-Atlantic empires.  Venice controlled the trade in gold and silver, controlled the spice trade, controlled the slave trade; and Venice was the financial capital of the western world.  It was a sickening oligarchical empire, and glimpses of its depravity were later captured by Friedrich Schiller in The Ghost Seer and James Fenimore Cooper in The Bravo.

In 1582 the oligarchical rulers of Venice created a new bank, the Banco della Piazza di Rialto, usually referred to simply as the Bank of Venice.  What distinguished this bank from the earlier Lombard private banks of the Bardi, Peruzzi, and other aristocratic families, was that, although the Bank of Venice was privately owned by members of the Venetian oligarchy, it was integrated directly into the functioning of the Venetian government.  Essentially, the financial oligarchy absorbed the Venetian state.  The Bank was given a monopoly to issue currency, set interest rates, determine who received loans, and other powers.

What was established was oligarchical financial rule, in which the state became the enforcer for the financial elite.  This was both the antithesis of Cusa’s concept of the Commonwealth, as well as a response by the Venetian aristocracy to the dangers which they perceived from the new ideas emanating from Renaissance minds.  The human creativity displayed in Filippo Brunelleschi’s discoveries, the fertile mind of Leonardo da Vinci, the astronomical breakthroughs achieved by Johannes Kepler, the emergence of vernacular literature pioneered by Dante, the growing role of technologically progressive urban life—all of this heralded the arrival of a new type of society, based on new conceptions as to the dignity and creativity of the human individual.  All of this was a threat to oligarchical rule, but the greatest threat was the creation of sovereign nation-states, and the Venetian financial and banking initiatives were their answer to that threat.

The new Venetian banking methods spread quickly through Europe, and in 1609 the Bank of Amsterdam (Wisselbank) was founded.  The Bank of Amsterdam was modeled explicitly—as statements at that time certify—on the Bank of Venice, but it went even further in creating top-down oligarchical financial rule.  The Bank of Amsterdam created what became known as “central bank money,” which was defined as the axiomatic monetary “unit of account,” a fictitious construct against which the value of everything else was measured.  The value of this “money” was set and manipulated by the Bank itself.

The nature of the new financial colossus in Amsterdam went way beyond what had been created in Venice.  In addition to the Bank, the rapacious Dutch East India Company and the speculative Amsterdam Bourse were both established.  Within only a handful of years, this troika of the Bank, the Bourse, and the Company created a maritime/financial empire the likes of which had never been seen before.  This was an oligarchical financial empire within which wealth and power were defined by monetary riches and the possession and trade in money-denominated commodities. Money and the control over money was established as the societal paradigm. It was all run by a private oligarchy, and the Netherlands was transformed into an oligarchical state.

On November 1, 1688 a Dutch fleet, under the personal command of William of Orange, invaded England.  The fleet, consisting of 500 ships and 40,000 soldiers, was four times larger than the famous invasion fleet of the Spanish Armada a century earlier.  The invaders landed in England, marched across the country, and within weeks Dutch troops under William's command had occupied the City of London.  This is what later generations of British oligarchs called the “Glorious Revolution.”

In fewer than 10 years following these events, the oligarchical financial system of Amsterdam was cloned lock-stock-and-barrel onto the City of London, with the establishment of the Bank of England, the new Royal Stock Exchange, and the new (reformed) East India Company.  Throughout most of the 18th century, London and Amsterdam functioned as one combined financial-monetary cartel (much as the City of London and Wall Street do today).  The two central banks—the Wisselbank and the Bank of England—rose to positions of enormous financial and political power.  It should also be noted that the Dutch and British empires, for almost two centuries, controlled the world slave trade and also invented global narcotics trafficking.

By 1763 Britain was the most powerful empire in the world, and then the Napoleonic Wars destroyed all of Britain’s remaining rivals in Europe.  London emerged from those wars in a position of unprecedented global financial and monetary power, a position they further enhanced with the introduction of the British gold standard.  In the second half of the 19th century, as discussed in the previous article in this series, they began the project of eliminating all national sovereignty through the creation of a world-wide central banking system, with each individual central bank modeled on the Bank of England, but with London calling the shots.

Money as a Form of Mental Illness

So much for the historical details.  Let us conclude be examining certain features which clarify the utter evil of this Venetian-Dutch-British banking model.

On the one hand, central banking asserts that it is they, the private financiers, who will run the world’s financial and monetary affairs.  National economic sovereignty no longer exists, and governments are never allowed to challenge the axiomatic right of such a system to exist. The central banking system itself is based entirely on usurious practices inherited from feudalism.  The system was created in the worst empires—Venice, the Netherlands and Britain—of the early modern era.  It is a system designed by the parasitical elite solely to enhance their power and wealth.

At the same time, however, the true destructive effect of this system paints an even blacker picture.  If we turn our attention away from this hellish landscape, and return to the subject of human happiness, we can see that all human progress flows from creative discoveries and inventions—from Benjamin Franklin’s work in electricity to the discoveries which shall be accomplished by the James Webb Telescope.  We as a species, through individual and cooperative effort, make discoveries which enhance our knowledge of the universe and which give us greater power to advance the human condition.

The oligarchical central banking system does not merely ignore this human imperative to discover, to create, to advance society through technological progress, it seeks to kill it.  In place of a legitimate notion of societal wealth grounded in human scientific advancement, they have erected a money system based on usury, thievery, and looting the people.  They have defined the possession of money—which they control—as the paradigm for human existence.

Stop—and think seriously about this.  The delusion that the possession of money will bring happiness is a form of mental illness, a mania, a phantasm, which is contrary both to the nature of the human identity and the historical evidence of upward human development.  Human creativity creates wealth, not money.

The trite phrase “Money makes the world go ’round” is not a mere jingle for the oligarchs.  During the late 17th and early 18th centuries, as the British central banking system was being created, a plethora of oligarchical scribblers in both England and the Netherlands, including William Petty and John Locke, wrote paeans to this new god of money.

The central banking system is also an imperial system, which today attacks and destroys any nation south of the equator that tries to better itself, while the London/Wall Street axis cannibalizes and eradicates what is left of the productive economy of the United States and other nations.  Our youth now work as gig workers, or in minimum wage jobs, or live in tents on the streets.  This is the modern consequence of the system that was created in Amsterdam and London.