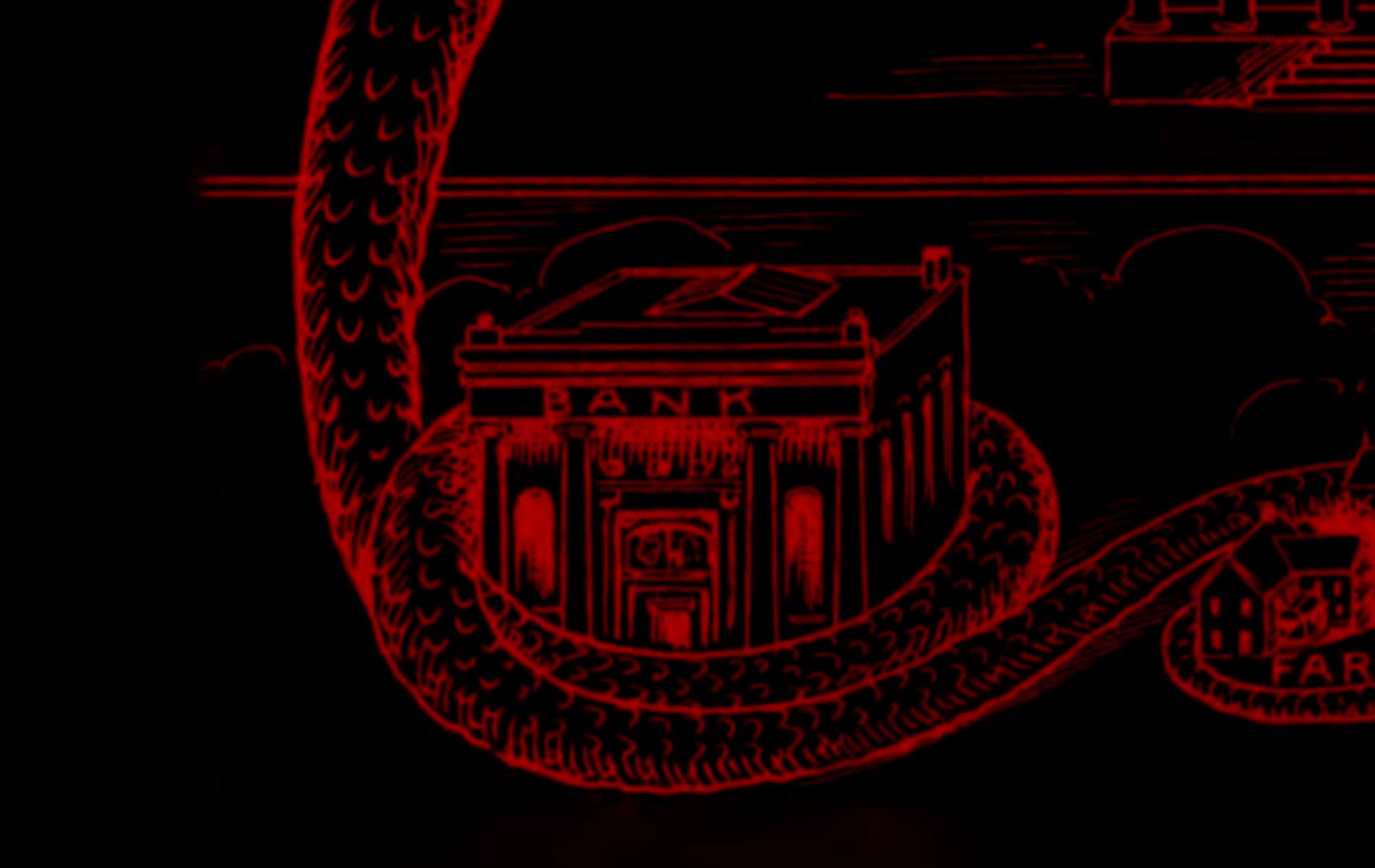 This article is the fourth in our new campaign, "The Decisive Battle in the War for the Republic, Put the Fed Into Bankruptcy; Create the Third National Bank."

As we look to the 2022 Congressional elections, LaRouche PAC has initiated a critical campaign: “The Decisive Battle in the War for the Republic: Put the Fed Into Bankruptcy; Create the Third National Bank.”  In the postings that have been offered up to this point, the destruction that has been visited on the U.S. economy and the American people by the policies of the Federal Reserve has been amply documented.  More will follow.

However, there are two essential points that American voters must grasp.  First, is that the economic devastation that has been imposed on our nation has been deliberate.  The shutdown of manufacturing, the collapse of our infrastructure, the forced bankruptcy of family farms and small businesses, and the precipitous decline in living standards—none of this is accidental or a result of incompetence.  As Bruce Director writes in Put the Fed Through Bankruptcy; Create the Third National Bank of the United States,  “The problem is not merely that the Fed’s policies are disastrously wrong and destructive—which they demonstrably are. The problem is the intention behind those policies and the intention behind the very creation of the Fed itself.”

The second point to consider is that the very existence of the Federal Reserve is anathema to the U.S. Constitution.  The Federal Reserve is not simply a U.S. institution; it is part of a worldwide system of private central banking, a system created in the 19th century by the British Empire in reaction to the spreading global influence of the American System of Economics.  The purpose of central banking is to ensure that control of all banking and financial affairs will rest in the hands of the private bankers—the imperial financial elite—and that this central banking system will be used to enrich and enhance the power of those same financial interests.

Central banking is based on a Satanic notion of money and finance.  Philosophically, the imperial money-centered concept of “wealth,” as it is espoused  by today’s central bankers, is absolutely contrary to the definition of actual societal wealth presented by Alexander Hamilton is his Report on Manufactures, as well as by Abraham Lincoln in his speech “Discoveries and Inventions.” Today’s usurious practices of Black Rock, the equity firms, the unregulated “offshore” banking havens and other tentacles of the modern day “money trust” is the polar opposite of a sovereign nation committed to human progress and the “right to advance.”  Since the crisis of 2007-2008 the global power of the central bankers and the financial oligarchy has expanded enormously, and the economic sovereignty of nation states, including the United States, has been greatly diminished.

In upcoming installments to this series, we will examine a number of key issues concerning central banking versus national banking and economic sovereignty.  In this brief introduction, however, certain preliminary remarks will be introduced, because what is most important is to grasp that we, as a people, can DO SOMETHING about our current crisis.  Despite the overweening arrogance of the Davos World Economic Forum crowd and the dictatorial inclinations of the transient Democratic Party majority in Congress, the power of the financial elite is not unassailable.  Our elected officials have the Constitutional authority to make or unmake all laws as they regulate our economic and financial future.  Abraham Lincoln accomplished a national economic revolution with his national banking and greenback policies.  The same can be done today.  The Federal Reserve was created by an Act of Congress, and it can be abolished by an Act of Congress.

What follows here is a brief sketch of how members of Congress fought, in the 20th century, against the power of the Wall Street and London financial elite, how they battled sometimes successfully, to rein in that power.  It is an uneven story.  Not all of the sentiments were perfect, and not all of the efforts were successful, but the importance of the chronology is to dispel the myth that the elite—the corporate and financial titans—are beyond our power, that they are “untouchable.”  Nothing could be further from the truth.

At the beginning of the 20th century, the United States suffered one of the worst financial meltdowns in its history, with the Panic of 1907.  As a result of wild financial speculation—with interest rates and the price of gold manipulated from London—banks failed, the stock market dropped 50 percent, and tens of thousands of businesses and farms were ruined.  Immediately following the Panic, leading Wall Street financiers began a campaign to create a central bank (what became the Federal Reserve) in America, to “bring stability to the financial markets.”  The group behind this was the nefarious “Jekyll Island Club,” and their front man in Congress was Sen. Nelson Aldrich, the grandfather of both David Rockefeller and Nelson Aldrich Rockefeller.

In response to this power grab by the financial oligarchy, a group of Congressmen launched a fight to block efforts to establish a central bank and to investigate the corruption of the Wall Street institutions.  Led by Congressman Charles Lindbergh Sr. (R-Minnesota), a Congressional committee was established in 1912, called the Pujo Committee, to investigate the Wall Street “Money Trust.”  A great deal of testimony was taken, but unfortunately, after the committee chairman, Arsène Pujo (D-Louisiana) left Congress in 1913, the work of the committee sputtered out.

Later, during the 1920s and 30s, a number of U.S. Congressmen continued to attack the Federal Reserve.  Perhaps the most notable was Rep. Louis T. McFadden (R-Pennsylvania), who is best known for his sponsorship of the McFadden Act of 1927, which outlawed interstate banking. (This was repealed in 1994).  In 1933 McFadden introduced a bill to impeach the Secretary of the Treasury, the Board of Governors of the Federal Reserve, and all of the directors of the Fed’s twelve regional banks.  In motivating his resolution, McFadden stated:  “The Federal Reserve Banks are private monopolies which prey upon the people of these United States for the benefit of themselves and their foreign customers; foreign and domestic speculators and swindlers; and rich and predatory money lenders. . . The Federal Reserve Act should be repealed and the Federal Reserve banks, having violated their charters, should be liquidated immediately. Faithless government officers who have violated their oaths should be impeached and brought to trial.”

During that same period, the most powerful attack on the Wall Street cabal came about through the efforts of Ferdinand Pecora, who became the Chief Counsel to the Senate Committee on Banking and Currency and led the work of that Committee from 1932 to 1934.  Pecora subpoenaed numerous Wall Street big shots, including J. P. Morgan Jr., Richard Whitney (President of the New York Stock Exchange, Albert H. Wiggin (Chase National Bank), Charles E. Mitchell (National City Bank) and investment bankers such as Thomas W. Lamont and Otto H. Kahn; and he subjected them to withering questioning that exposed the thievery of their financial practices.  As a result of the work of the “Pecora Commission,” Congress created the Securities and Exchange Commission and enacted the Glass-Steagall Act which shut down most of the financial speculation by the banks. (This was repealed in 1999).  In 1939 Pecora stated that the work of the Commission could have gone further.  Pecora wrote: “Had there been full disclosure of what was being done in furtherance of these schemes, they could not long have survived the fierce light of publicity and criticism. Legal chicanery and pitch darkness were the bankers' stoutest allies.”

Attacks on the Federal Reserve did not end with World War II.   Congressman Wright Patman (D-Texas), who served in Congress for 48 years, from 1929 to 1976, was Chairman of the House of Representatives Committee on Banking and Currency.  During those years, he introduced legislation on 20 separate occasions to repeal the Federal Reserve Banking Act of 1913.  Another Texas Democrat, Henry González, served in the House from 1961 to 1999, eventually becoming the Chairman of the Committee on Banking and Currency—the same post held previously by Patman.   During his 38 years in Congress, González introduced legislation to repeal the Federal Reserve Banking Act of 1913 nearly every year.

The Sovereign Power of Government

But the reality is that the majority of the stock in the Federal Reserve (a private corporation) is held by the largest mega-banks in the nation.  It is also the case that these same banks are authorized to elect six of the nine directors (a two-thirds majority) of each of the Fed’s regional banks.

So it is the bankers who run the Fed, on behalf of themselves and their partners in the financial oligarchy, who seek to maintain the power and maximize the financial wealth of that oligarchy.  Nothing about this is normal.  Nothing about it is Constitutional.  If things were going great in the country, many of us might tend to ignore this criminal conspiracy.  But clearly, things are not going great, and nothing will be right again until we shut down this gigantic swindle.

In the examples of 20th century Congressional opposition to the Fed presented above, the intention is not to say that everything that was done by the named individuals was perfect, nor that their actions are sufficient for the crisis of today.  Rather, the simple point is to show that, over a span of decades, elected Congressmen have stood up and attacked the Fed and achieved important victories.  That brings into focus the crucial importance of the 2022 election.  We need new representatives of the American people in Congress today—with the courage and wisdom to shut down the Fed now!  It is time to break the stranglehold of the financial elite, return to the American System of Economics, and save our Republic!