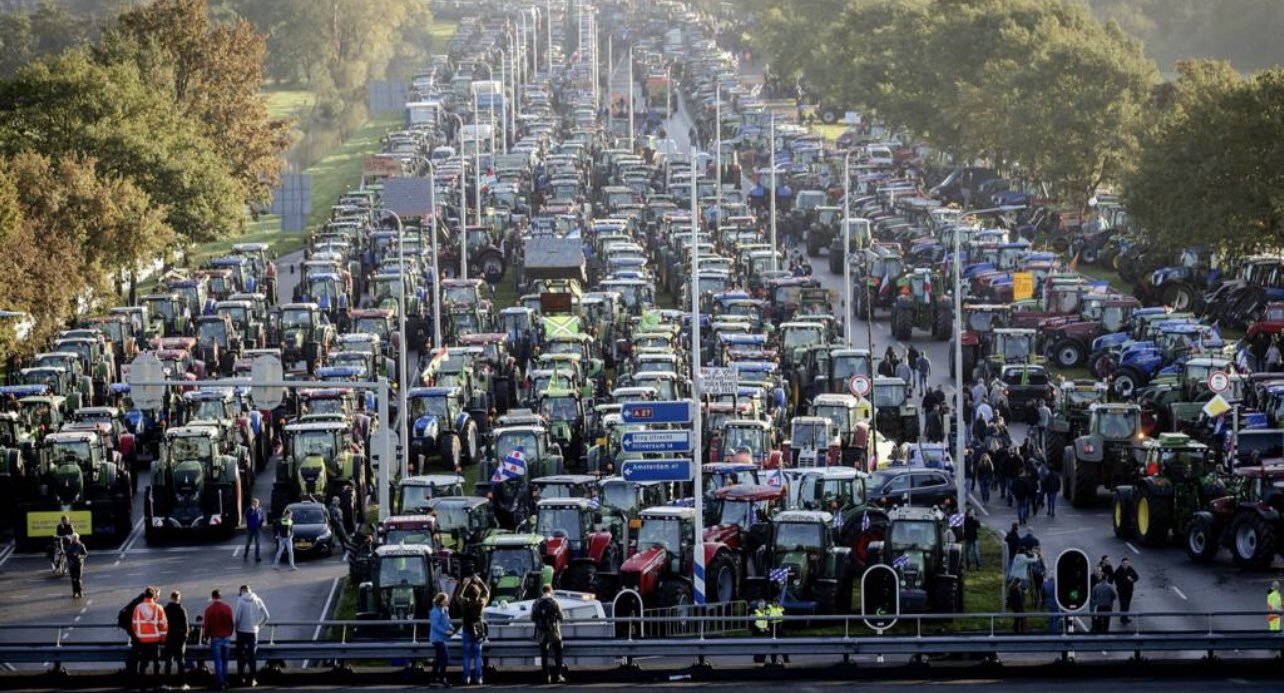 The Netherlands, judged by many to have the most advanced and efficient agricultural production in the world, has been wracked for weeks with protests from thousands of its farmers. They have blocked key food distribution centers with tractors, creating empty grocery store shelves. Last week, Dutch fishermen joined them, blocking ports with their boats. Similar farmer demonstrations, in support of the Dutch farmers, are breaking out in Germany, Poland and Italy.

Last week, the government of Sri Lanka fell. The people had taken to the streets by the tens of thousands after the complete collapse of the economy. They routed their globalist overseers, partying in their mansions, swimming in their swimming pools. The economic collapse started when agriculture in the country collapsed. Ghana is now undergoing a similar process. These events are occurring against a backdrop of widely predicated famines throughout the world which the G7 countries are seeking to blame on Vladimir Putin.  Nothing could be further from the truth.

The actual culprit is the insane climate apocalypse myth, the same myth which is leading most of Europe to voluntary economic suicide (aided and abetted by the sanctions on Russia) and which animates the Biden Administration in its continuing and single-minded destruction of the U.S. economy.  For lack of fuel and fertilizer, independent U.S. farmers are also facing extinction. The Netherlands, Sri Lanka, and Ghana all have extremely high ESG scores, showing climate compliance with the fascist dictates of the World Economic Forum and the current globalist financial elites. Sri Lanka had a near perfect score of 98.

Following the various climate agreements (engineered and cheered by the British monarchy) the world’s central banks and private mega financiers have decided that ESG climate compliance will determine any future investment in national economies world-wide. With respect to farming, insane mandates pursuant to the WEF/European Union’s “Farm to Fork” program are being widely implemented. Additionally, thousands of acres of farmland are being taken out of cultivation for purposes of “conservation” in a complementary WEF mandate.  It demands that 30% of the earth’s landscape lay fallow, in its “natural” state.

Dutch Prime Minister Mark Rutte’s government is implementing climate rules which require a slash of nitrogen oxide and ammonia emissions by 50% by 2030. That means chemical fertilizers and herds of cattle, pigs, and chickens are out; organic foods, synthetic meats, and bugs are in. Instead of the infamous declaration by Marie Antoinette, “Let them eat cake,” we have Klaus Schwab, Mike Bloomberg, and Mark Carney proclaiming, “Let them eat bugs.”  Dutch farmers are being told to farm organically and to drastically reduce their animal herds, or face confiscation of their land. Many are family farmers who have farmed for generations.

In April of 2021, Sri Lanka banned chemical fertilizers based on the WEF and allied central bank and financier diktats. According to a fine analysis by California gubernatorial candidate Michael Shellenberger: Green Dogma Behind Fall Of Sri Lanka “One-third of Sri Lanka’s farm lands were dormant in 2021 due to the fertilizer ban. Over 90% of Sri Lanka’s farmers had used chemical fertilizers before they were banned. After they were banned, an astonishing 85% experienced crop losses. The numbers are shocking. After the fertilizer ban, rice production fell 20% and prices skyrocketed 50 percent in just six months. Sri Lanka had to import $450 million worth of rice despite having been self-sufficient in the grain just months earlier. The price of carrots and tomatoes rose five-fold. While there are just 2 million farmers in Sri Lanka, 15 million of the country’s 22 million people are directly or indirectly dependent on farming.”

When tea production crashed because of the fertilizer ban, the country’s economic fate was sealed. Tea exports had paid for 71% of the nation’s food imports. The cascading impact of that collapse meant the government “could not pay for food, fuel, and service its debt,” according to Shellenberger.

The Netherlands produces 0.46 percent of the world’s CO2 emissions, and the slashing of nitrous oxide and ammonia emissions will have negligible impact on the alleged “climate crisis.”  The country is the third largest agricultural producer in the world, behind the U.S. and Germany when the flowers it produces are taken out of the calculations.

Both Mark Rutte and Justin Trudeau are graduates of the World Economic Forum’s Young Global Leaders program, created to enforce the corporativist fascist mandates of the private globalist financier cabal by wholesale capture of national governments.