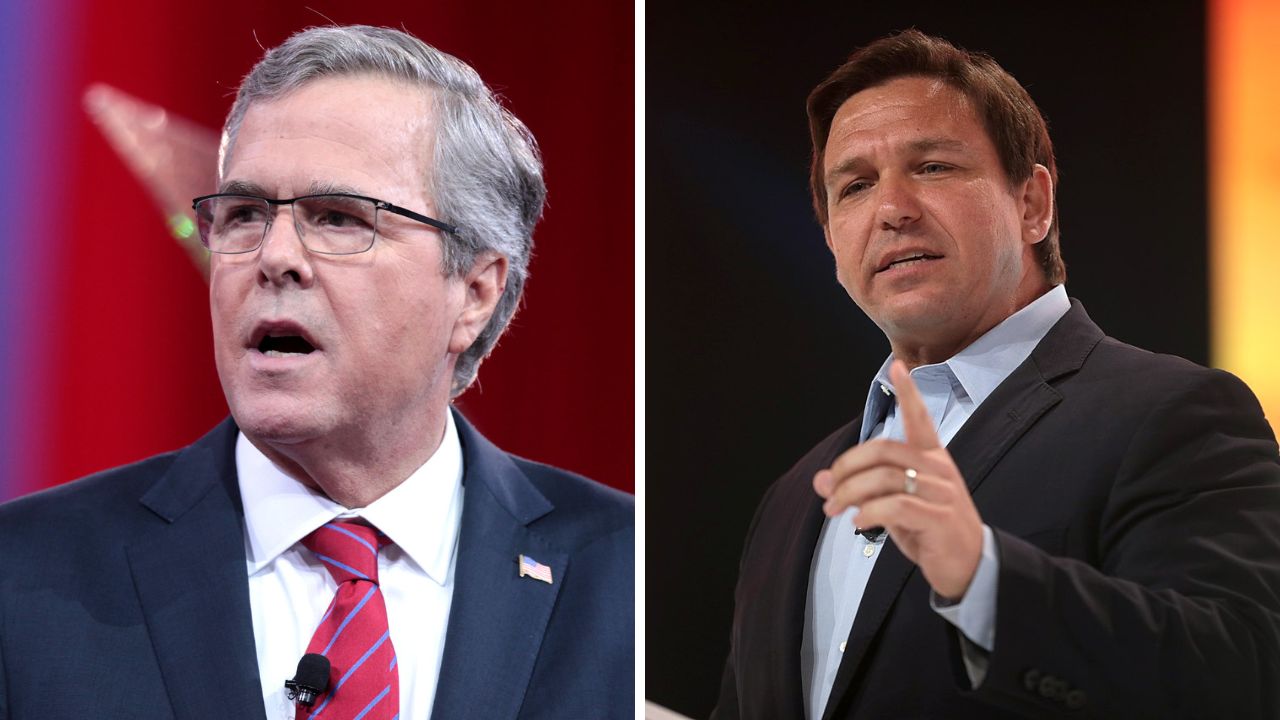 When I published the first overview profile of Ron DeSanctimonious I forgot to tell you about JEB.  It you don’t recognize the all caps first name, you have probably forgotten that it was the brand under which Jeb Bush ran for President in 2016.  He was promptly demolished by Donald Trump despite Washington’s scripting of 2016 as a lame dynasty shootout—to wit, the Bush dynasty vs. that of Clinton.  This, when Americans had washed their hands of both evil avatars, having suffered under them greatly, and overwhelmingly welcomed the insurgent outsider, Donald Trump. JEB has been seeking revenge ever since.

In 2018 when Ron DeSantis first ran for Governor, JEB was completely on board, hosting major fundraisers for the then Congressman and opening his Florida networks, built while Bush was governor, to the DeSantis campaign. Fully knowing that Donald Trump had engineered the DeSantis win, Bush claimed that DeSantis won election because of 100,000 black women who supported DeSantis’ position on charter schools and “school choice,” JEB’s hobby horse. That claim was repeated in the national Republican establishment press, although local papers in Florida knew better. For those who don’t have children, the Bush Administration’s Common Core, Obama’s "race to the top" and similar programs favored by JEB have played a huge role in the present miseducation and decortication of our nation’s youth.

The JEB/Ron close and cozy relationship has continued. Here’s JEB on Ron making Time Magazine’s 100 most influential people list: “Florida has emerged from the pandemic as a national model of personal freedom, economic growth, environmental protection & education excellence. The Beltway crowd may not like @GovRonDeSantis ' style, it’s his record that will become his legacy.”

Florida has emerged from the pandemic as a national model of personal freedom, economic growth, environmental protection & education excellence. The Beltway crowd may not like @GovRonDeSantis' style, it’s his record that will become his legacy. #Time100 https://t.co/c4NMkE3YwQ

In traditional Republican hangouts like the Hill, (DeSantis is the new leadership Republicans are yearning for), the Washington Examiner (DeSantis will be formidable in 2024 and JEB is a fan) and Fox, JEB has been similarly fawning and effusive. In case you don’t remember just how stinking evil the Bush family is and what Ron DeSantis has been and continues to be involved with, you can take a look at a piece I co-authored here with Tony Chaitkin.