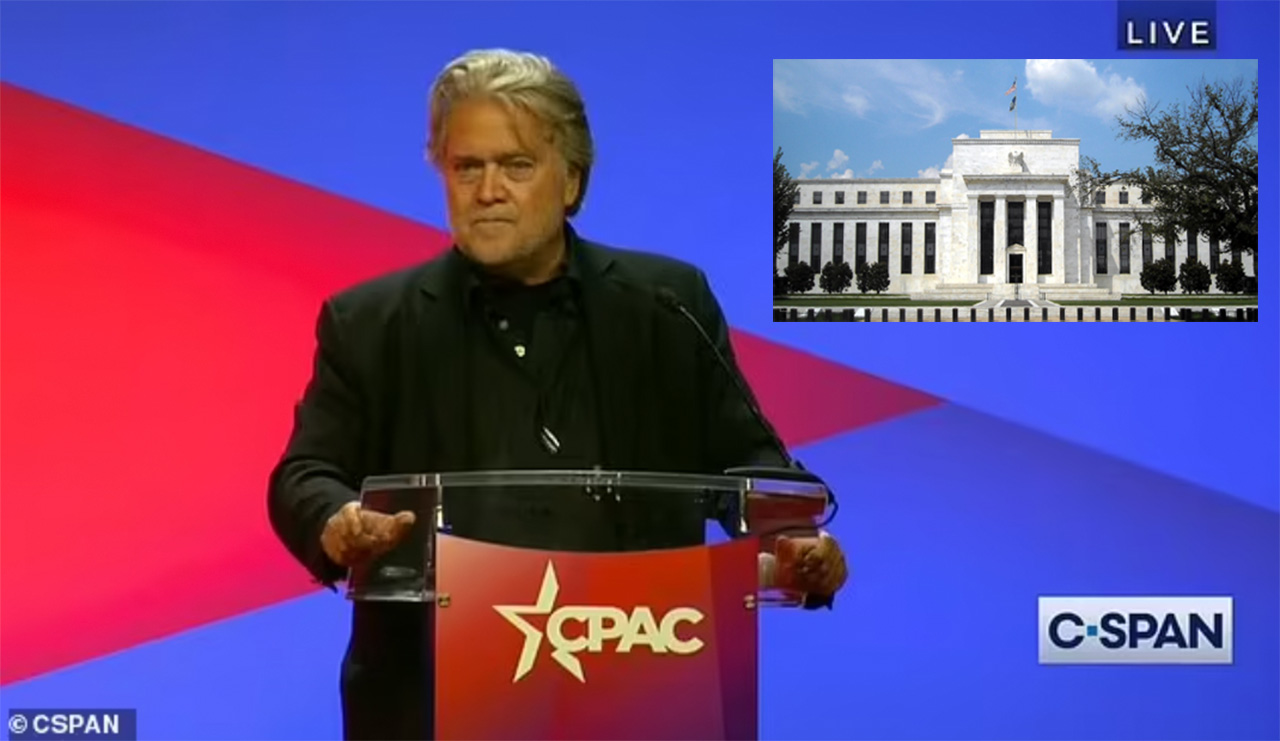 Steve Bannon, Friday night (Aug. 5) at the Dallas convention of the Conservative Political Action Committee (CPAC). The inset of the Federal Reserve Building was added by LaRouchePAC.

“We don’t need to audit the Fed; we need to end the Federal Reserve!” Steve Bannon, the former chief strategy advisor to Donald Trump, declared as he concluded his speech on Friday night (Aug. 5) at the Dallas convention of the Conservative Political Action Committee (CPAC).

“The Federal Reserve has usurped its power and the power of the American people and our elected representatives. And, no, they do not have the consent of the governed. We will not comply. We will not submit. And it must be ended.”

In taking aim at the Federal Reserve, to the enthusiastic support of the pro-Trump activists in the audience, Bannon is joining a growing movement initiated by LaRouche PAC which recognizes that there is no way to straighten out the economy and the politics of the United States, and the rest of the world, unless the United States breaks, radically, with the fraud of central banking.

Back in February, LaRouche PAC leaders Mike Steger and Kesha Rogers campaigned at the Orlando CPAC conference for abolishing the Federal Reserve and establishing a Third National Bank of the United States to issue credit for large scale and long term infrastructure development, development and production of advanced energy sources, such as modern nuclear fission and fusion power, and building the necessary modern platform for a technologically advancing manufacturing and production economy.  It was clear there and has been clear ever since that they stirred a profound response.

The Fed has come under increasing criticism from populist and academic circles for its obvious failures, especially over the last 15 years. Many have pointed out, as Bannon did in his CPAC speech, that the Fed’s policy of printing money, buying government debt, and providing unlimited free money to selected Wall Street, London, European and Asian banks, hedge funds and money market funds has created the unprecedented economic inequality in the United States and the world today. The recipients of the Fed’s largess have also been the main advocates and implementers of globalization and the draining of U.S. industrial capacity.

But the main question to be confronted is not, Should the Federal Reserve be ended? It concerns what replaces the Fed. Bannon alluded to this in his CPAC speech by referencing the historical American debate over monetary policy and national banking. He alluded to the fact that the debate over a national bank or national banking pitted Hamilton against Jefferson, Henry Clay and Abraham Lincoln against Andrew Jackson and others and had been the central public political discussion of the entire 19th century. That discussion ended with the bankers’ coup which established the Fed. While Bannon said the replacement of the Fed would be owned by the people, he did not elaborate the difference between national and central banking.

On Saturday night, Brian Lantz, from LaRouche PAC provided the specifications for the return of national banking in a class which otherwise delineated the complete fraud of both the CHIPS Act and the misnamed Inflation Reduction Act of 2022, passed by a deluded and destructive Congress over the past week in an effort to put up Democratic Party points for the Midterms. You can watch Brian’s class here and you should share it widely.

A National Bank, as Hamilton specified, is a government-backed Bank that directs credit by discounting loans to private enterprises, enterprises investing in development and expansion of manufacturing, agriculture, and the discoveries and inventions which lead to technological progress. Thus, instead of printing money and handing it out to money center financial institutions to prop up fictitious financial instruments, as the Fed does, a National Bank provides credit, through the productive economy, for economic expansion.

The fraudulent CHIPS Act illustrates this point. Under the guise of re-shoring the semi-conductor industry, Congress, with the backing of Wall Street, passed this bill to provide taxpayer subsidies to select companies to build chip foundries in the U.S. However, these are the same companies that have off-shored semiconductor production over the last decades because the Fed’s free-money made it more financially profitable to switch from manufacturing chips, which requires large capital investments, to simply designing chips and off-shoring production to Taiwan and other Asian countries.

Under their scheme, Wall Street funds reaped greater rewards from the Fed’s free money by investing it in the financial instruments of semiconductor companies, rather than investing this money in long-term capital investments for manufacturing in the U.S. With small exceptions, the entirety of manufacturing was off shored to Asian countries.

Now these same swindlers on Wall Street have designed the CHIPS Act so that the government gives more money to these same companies to bring their foundries back to the U.S. The government will get the money from the Fed which will print it and buy government bonds from Wall Street banks. Of course, the scam is made even worse by the provisions in the bill favoring green energy schemes, which are inherently inflationary, while sending oodles of money to tax-exempt well-endowed woke universities. The allocations of this funding will be determined by government bureaucrats and the Wall Street connected Biden collective.

An objection raised against national banking is that it puts the government in control of allocating credit. But this is far from the truth. National banking simply by-passes Wall Street’s preference for speculative financial instruments. Instead, credit is allocated to risk-taking entrepreneurs who are willing to invest substantial amounts of capital for productive enterprises. This bank credit is distinct from direct government financing which is primarily focused on new funding for modern infrastructure, advanced scientific research, and frontier projects such as the space program, basic bio-medical research, fusion, and other advanced technologies.

Had this been the practice over the last 40 years, the U.S. would not have seen its physical economic production disappear. As practiced by the administrations of Washington, Lincoln, FDR and JFK, national banking policies were the basis for the United States becoming the greatest economic power in the history of mankind.

If the control of our money is to be returned to the people, will the people control the government, and if they do, will they know how to run it and to what end? Too often, in the past, the populists now assembled under the MAGA banner complained about the elites stealing the government while acquiescing in the theft by not seeking the power and the competence to run the government themselves. As LaRouche PAC has emphasized this war can be won if the hundreds of thousands of citizens now mobilized to save America shed their identity as “underlings” and educate themselves to effectively run this government beginning now. The Biden collective must be defeated and shattered, and the Trump Administration of 2024 prepared, starting with abolishing the Fed and specifying the general direction of projects to be supported by the Third National Bank—projects and endeavors which define the future.