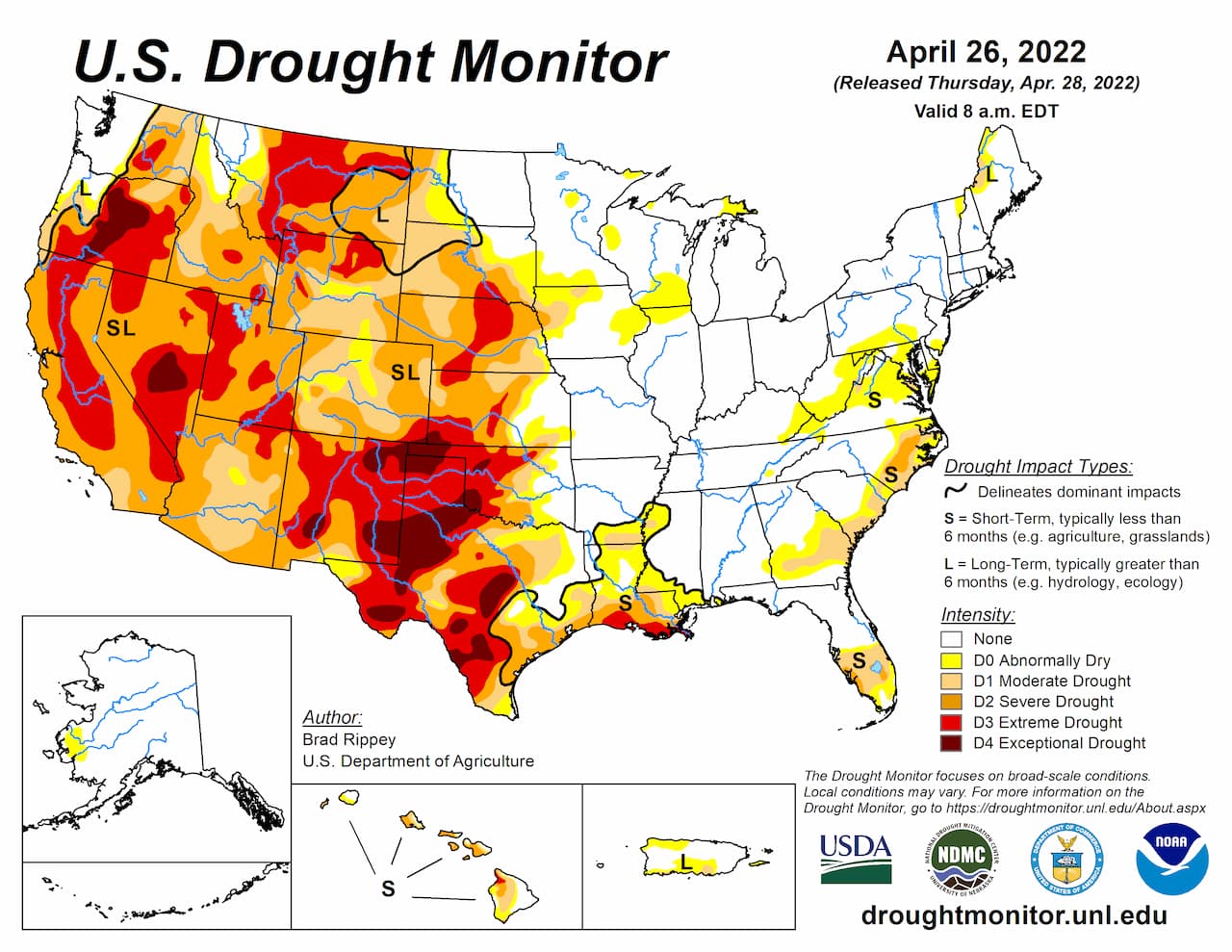 With more than 60 percent of the nation now officially in drought, both water restrictions and the historic criminal incompetence of policy makers now threaten the nation's food supply and electricity availability. This is on top of the Biden collective’s war on fossil fuels and the shutdown of fertilizer and other supply chains as the result of the Biden/British war on Russia and Ukraine.

While the far Western states are experiencing the most intense drought, the Midwest is not untouched. The states of North Dakota, South Dakota, Nebraska, Kansas, Colorado, and Wyoming are in drought. And parts of Kansas are experiencing “exceptional drought,” the most extreme measure of drought, according to the U.S. Drought Monitor.

Texas is now in its second extreme drought in the last ten years. Rainfall in that state this past winter has been at or below 50 percent of the average rainfall level.

In a mid-April report, the National Oceanic and Atmospheric Administration stated, “The current multi-year drought across the West is the most extensive and intense drought in the 22-year history of the U.S. Drought Monitor.” This drought has been made much worse by the lowest levels of precipitation ever recorded during the usually wet months of January, February, and March—especially for California. Another recent study asserts that the Western drought is the worst experienced in more than 1,200 years.

According to the U.S. Drought Monitor, about 90 percent of nine Western states are in some level of drought, while about 35% of their territory is in either extreme or exceptional drought.

While California itself is in the third year of the present drought, the Colorado River watershed is now in year 22 of a megadrought.

Throughout the West water district managers and state water officials are already announcing major cutbacks in water deliveries. On April 27th, the Metropolitan Water District of Southern California (MWDSC), for the first time ever, announced a water emergency. It will limit water use in southern California—where six million people live.

Drought emergencies were declared this week in four more counties in Oregon. Of course the Colorado River, which provides water to more than 40 million people in seven states and Mexico, was declared to be in a Stage One Emergency last year—cutting Arizona's water by 20 percent, Nevada's by seven percent, and Mexico's by five percent.

Late last year in California, the two main projects that deliver water to more than 20 million people and irrigate almost 10 million acres of farmland, announced that deliveries would be cut by 100 percent for water contractors for the Central Valley Project (CVP), and by 85 percent for contractors for the California State Water Project (CSWP). The CSWP went further in terms of the water that it usually delivers to Southern California. This year the CSWP will send no water at all—which is why the MWDSC announced its state of emergency on April 27th.

About half of the water used by 19 million people in Southern California comes from Northern California, the Colorado River, and the Owens Valley in the eastern Sierra mountains.

What has made such a water crisis inevitable in California is that the last major water project was completed in 1972—when the state had 20 million people. Today the population is 40 million, with another 10 million expected by 2050.

Had the projects proposed by the forward-looking great leaders of the 1960s not been allowed to die, then California and the entire Southwest would have had water by the 1990's, when the water crisis began. Those projects planned during the Presidency of John Kennedy were the following: first, the building of nuclear-powered desalination plants, beginning in California; and second, the North American Water and Power Alliance (NAWAPA). Here are links to both projects:

So, what happened 50 years ago that virtually eliminated not only the building of water infrastructure in California, but both infrastructure and industrial investments across the nation? It was the beginning of what plagues us now—the Central Banking system that measures wealth by money and not production. The downward transformation began in 1971 with the deregulation of the global fixed exchange rate monetary system, and was soon followed by three decades of banking deregulation, that turned our economy into a gambling casino. Until that gambling system is dismantled, there will be no solution to the water crisis or to any other symptom of the diseased and decrepit economy that the parasitical monsters of London, Wall Street, and Brussels have created.

While the urban areas will have to conserve water and not water their lawns so much, it is the agriculture sector throughout the West that is taking the brunt of the damage.

For example, in the second year of the drought in 2021, California agriculture, a $50 billion a year business that employs more than 420,000 people, fallowed more than 400,000 acres of some of the best and most productive farmland in the world. More than $1.7 billion was lost to California farmers as a result, and more than 14,600 farm jobs were lost.  The damage this year, in the third year of the drought, will be even more severe, with already an estimated 500,000 acres or more to be fallowed.

The California Department of Water Resources Director Karla Nemeth stated in an interview two weeks ago that, “Agriculture is getting cut back, and there are many agricultural users, particularly in the Central Valley, that will get nothing from their water contracts.”

This is a threat to the nation’s and the world's food supply, and is sure to drive the already staggering inflation up a few more notches. Between just California and Arizona more than 60 percent of the nation's fruits and vegetables are grown, and more than 90 percent of the nuts—like almonds and pistachios.

With the scarcity of water for agriculture, farmers are paying up to $2,000 an acre foot now in the Central Valley of California. During abundant water years, that same water could be had for $250-500. “Even with better crop prices, $2,000 an acre foot is unsustainable for most farmers over time,” said Tim Ashlock, General Manager of Buena Vista Water Storage District in Kern County.

Add to that the subsidence of the soil as groundwater has been over-pumped from aquifers, creating hundreds of dry wells, the breakdown of the supply chain, making essential equipment unavailable, and 60 percent inflation in farm inputs like fertilizer, fuel, and other essentials, and you get the picture of the situation facing anyone thinking about planting.

What the environmentalists failed to accomplish in attacking the most productive agricultural region in the world, is now occurring based on the collapsing Central Bank-steered financial system and the apparent determination of the world’s oligarchs to reduce the population through famines, diseases, and wars.

Focus: The Colorado River and the Threat to the Electric Grid

California's insane electrical power policy of shutting down coal and oil generation is now complemented by the collapse of hydropower. Last summer the generating capacity of Oroville Dam was shut down as the water level in the reservoir became too low. Overall, in a wet year, California gets about 20 percent of its generated electricity from hydropower.

A more extreme threat to the electricity supply is found on the Colorado River.

The Colorado provides water to more than 40 million people in the Southwestern states of the U.S. It also produces electricity, mainly from two large dams—Hoover Dam and Glen Canyon Dam. The reservoirs behind the dams, Lake Mead (Hoover Dam) and Lake Powell (Glen Canyon Dam), are the two largest reservoirs in the U.S.

For 22 years, beginning in 2000, the river basin has been in drought—which has dramatically lowered the lake level of both reservoirs.  The water level in Lake Mead has dropped by nearly 150 feet since 2000. Thus, the Secretary of the Interior issued the first-ever Tier 1 shortage declaration last fall—cutting the water delivered to Arizona, Nevada, and Mexico.

Lake Powell is of most concern at present. The Glen Canyon Dam is the mammoth of power production, delivering electricity to about 5 million customers in seven states—Arizona, Colorado, Nebraska, Nevada, New Mexico, Utah and Wyoming.

Two unprecedented measures are now being taken. One has already been approved. First, 500,000 acre feet of water from the Flaming Gorge Reservoir in Utah and Wyoming will be allowed to flow into Lake Powell. Second, 480,000 acre feet of water from Lake Powell, which would normally flow to Lake Mead, will be held back in Lake Powell.  That water is now going to stay in Lake Powell. That means that California, Nevada, and Arizona localities served by Lake Mead will not receive the water they need from the reservoir.

Since the 1971 creation of the post-industrial consumer society, a cascade of crises has become the order of the day—since “planning” and “building” for the needs of future generations have been labeled as outmoded and deranged ideas only embraced by authoritarian societies, socialists, and communists. An entire school of crisis management has emerged in recent decades—effectively brainwashing political leaders and many of the otherwise competent managers of systems like that of a state's water supply, to no longer even think of preventing crises, much less solving them. It is a useful lesson to reach back in history and discover the truth, that our former great leaders acted to build that which generations to come required. Here, I provide a few links—a guided tour to a time of looking to the future and providing the infrastructure necessary to grow the economy. Here they are:

A Prometheus Among Us: William Mulholland Brings the Water to Los Angeles

In August, 1962, President John Kennedy took a quick trip to the Western states to dedicate three great water projects.
The first was a stop in South Dakota to dedicate the Oahe Dam—at the time the largest earth-filled dam in the world. It is located on the Missouri River and creates Lake Oahe—the fourth largest man-made reservoir in the United States. The first video below is of that dedication.

The second stop was in Colorado to dedicate the construction of the Frying Pan project. That is the second video.

The final stop on this trip was at Los Banos, California to dedicate, and, as he joked, to blow up the valley to begin construction of the San Luis dam and reservoir. That is the third video.