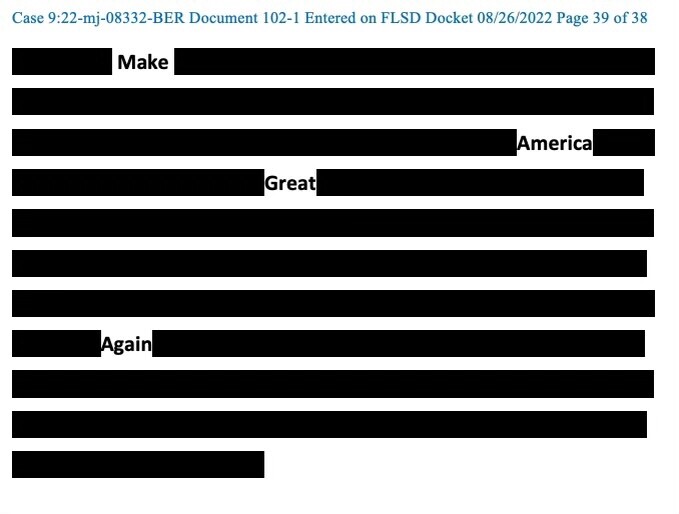 The heavily and selectively redacted FBI search warrant affidavit from the Mar-a-Lago raid has proved to be a Rorschach Test for the commentariat set. The hysteric left and Uniparty Trump-haters read the 50% of the document (composed of law enforcement gibberish and boilerplate) revealed publicly, and shout that the diabolical road runner, fascist, and serial abuser of Washington’s librarians and the bureaucratic gatekeepers of this nation’s overclassified and misclassified “secrets,” has finally met his deserved soon-to-be incarcerated fate. I say overclassified and misclassified because you are barred, under Executive Order 13526 (the relevant law) from using classification to hide violations of law or embarrassments to Washington’s agencies.

Evidence of violations of law or embarrassments to Washington’s agencies, along with attorney-client and executive privileged documents almost certainly constitute the bulk of the offending documents seized at Mar-a-Lago. Larry Johnson, who has very good sources, insists that Trump has “CIA/FBI SAPs that detail the 2016 plot to portray him as a toady of Vladimir Putin and the Kremlin. Too bad for the CIA and FBI. Trump had the full legal authority to declassify that intelligence product. The CIA and FBI are frantic to protect the identities of the British, Australian, and Italian intelligence personnel who helped plant evidence to frame people working for Trump. That is one of the motives behind the decision to raid Trump’s Florida residence and try to keep that information from the public.”

The majority of the nation’s sentient have already concluded that the raid was this or something very close to it.  As such, it was a continuation of the treasonous takedown of the United States which began its present phase on September 11, 2001, with the installation of a national security surveillance state and rule by one emergency decree after another, each more destructive of the principles governing our republic. A terrified and inflamed public agreed to the Bush/Cheney regime’s Patriot Act and similar desecrations of civil liberties and separations of powers, along with forever genocidal wars in the Middle East. Congress has not really functioned ever since. This was followed by the bailouts during the systemic economic collapse of 2007-2008, a bailout of Wall Street and the City of London on the backs of the American people from which the nation has never really recovered. Instead, every remaining piece of the economy, regardless of whether it was a profession, such as medicine, or a valued productive enterprise, such as a farm, was financialized and loaded with debt, while almost all remaining production was outsourced to cheap labor foreign locales.

Finally, there was the COVID “emergency” with its insane, unscientific and dictatorial censorship and mandates, and rigged Presidential election. This week we learned from Mark Zuckerberg that Facebook censored the Hunter Biden laptop and Biden family influence peddling scandal at the behest of the FBI. Seems the FBI is addicted to the business of rigging American elections.

The elite war on energy, under the rubric of the so-called Green New Deal, is but the latest phase of the elite war on the population itself. For them to survive the onrushing present economic collapse, the population must be cut down to manageable numbers, by discouraging family formation and births, and by wars and other forms of soft and hard genocide. Inflation rages throughout the world because of the deliberate policies of the Fed and other imperial central banks. They had hoped to inflate their way out of the economic collapse of 2008, and instead created a two-tiered economy composed of a small slice of billionaires at the top and the rest of the population, struggling to survive daily, far, far below them on the bottom.

European leaders are telling their citizens to prepare for economic catastrophe this winter. In Britain, energy bills have spiked 80% with inevitable rollover impacts on everything else. In France, President Emmanuel Macron returned from vacation and told his ministers to prepare for untold crises in which “the world faced the end of an easy abundance of goods and resources” and “of a certain carefreeness." New measures involving sacrifice and austerity will be required as the result of “doing the right thing” in conducting a proxy war against Russia via Ukraine.  This is proclaimed as a fight for “freedom” against autocracy while dictatorship by mob and executive fiat ascends as the operating principle of the advanced sector.

Forget the endless commentary. It is a desperate and potentially deadly distraction from the simple fact that the failing Washington Uniparty faces defeat by popular revolt in November. The economic crisis is going to raise its level of devastation here. Washington’s playbook is simple: indict or thoroughly demonize Trump to split the GOP vote; use the security state to defame, attack, and disillusion his supporters; issue payoffs and bribes to the Democratic base like last week’s college loan forgiveness; celebrate killing babies as a fundamental Constitutional right and moral imperative; and replay November 2020 vote-fraud operations.

They are betting that the American people won’t recognize that this is a war which they can win, provided they stay focused on the goal and organize an overwhelming vote against Washington’s current Democrats and Uniparty Republicans in November. Vote fraud cannot survive an overwhelming vote or the election integrity measures thousands of citizens are now undertaking.  Nor can the present Uniparty survive a population determined to reclaim their country and rebuild it, taking down the entire system which has suppressed it for decades. November’s electoral victory must be followed by Pecora-type investigations focused on the events--financial, moral, and within the entire corrupt intelligence community --which have afflicted our country since September 11, 2001. These investigations must center particularly on the actions of Wall Street, the City of London, and Brussels, and their controlled entity, the U.S. Federal Reserve. Their first goal must be abolishing the Fed and establishing a Third National Bank to create a modern American industrial, cultural, and scientific renaissance.

Across the land, in response to Mar-a-Lago, citizens lit the switchboards of Congress and anyone else with presumed authority. The reaction was cumulative, and it was outrage. It was also not the violence which the atrocity was intended to provoke. It is clear to most that Trump interrupted the succession of lickspittles the Establishment installed in the Presidency after September 11, 2001. For that he was targeted from the moment he came down the escalator in 2015 at Trump Tower and announced his run for the Presidency. On the Democratic side, Bernie Sanders remained a favorite in 2016. Not because he was a “socialist” but because the population saw him as someone who would take on this entire decadent “system.”  Sanders, unlike Trump, folded, betraying those who saw him as someone who would fight to the finish for them.

Given the reaction to Mar-a-Lago, the New York Times Editorial Board by Friday, August 26th had worked itself into yet another extraordinary full-throated froth. This time they demanded that Donald Trump be criminally prosecuted, either for the events of January 6th (hyperbolically equating what will prove to be a Deep State-provoked and controlled two-hour riot to the outbreak of the Civil War), or his “hoarding” of classified “secrets,” or whatever other crimes can be created. They declared that the “threat” posed by Donald Trump and his supporters to “American Democracy” has metastasized. The now clearly lunatic Gray Lady concludes her diatribe with this projection of their own perfidies: “Mr. Trump’s actions have brought shame on one of the world’s oldest democracies and destabilized its future. Even justice before the law will not erase that stain. Nor will prosecuting Mr. Trump fix the structural problems that led to the greatest crisis in American democracy since the Civil War. But it is a necessary first step toward doing so.”

The day before, the pretender President of the United States had previewed the Time’s screed with a demagogic and deeply hypocritical rave at a Midterm campaign rally in Maryland. Squinting at the teleprompter script in front of him and yelling out his lines, Joe Biden declared that Trump and the over half and growing segment of the American population which supports him were “semi-fascists.” Up in New York state, that nutcase Governor, Kathy Hochul, had been telling Republicans all week to leave New York and move to Florida because they do not represent “New York values.”

The Washington establishment Republican response has been all about timing. Knowing that millions of Americans of all political stripes were outraged by the raid on Mar-a-Lago, and would not forgive another “nothing to see here folks” response from Washington’s Republicans or their colleagues on Fox, they initially condemned the raid. Ron DeSantis, current Trump replacement in waiting (DeSantis is funded solely by Wall Street’s hedge funds and megadonors) issued the type of milquetoast condemnation of the raid which fits the current Washington GOP midterm strategy:  Create a false dichotomy between economic and social hot button issues and focus on the latter since establishment Republicans are fully complicit in the destruction of the economy.  Working off a grotesque polling profile which says that all Trump supporters fall for “big dick energy,” DeSantis also cut a national ad featuring DeSantis as Top Gun taking down the national news media.

Today, Monday, August 29th, reflecting Donald Trump’s realization that the frontiers of science are the only means to a genuine U.S. economic and cultural revival, the Artemis test rocket will start its daring journey to the Moon. If the mission works, the bold program envisioned by Donald Trump to once again capture the nation’s imagination and creativity can continue. If it fails, Biden, the pretender President, will undoubtedly declare this yet another Trump failure, and cancel or delay Artemis. If we allow that, the previous generation, among them John F. Kennedy and Lyndon LaRouche, so honored by all as the heroes of World War II, will continue to look down on us in horror. Like Donald Trump, they will mourn how much we seem to have allowed ourselves to shrink.