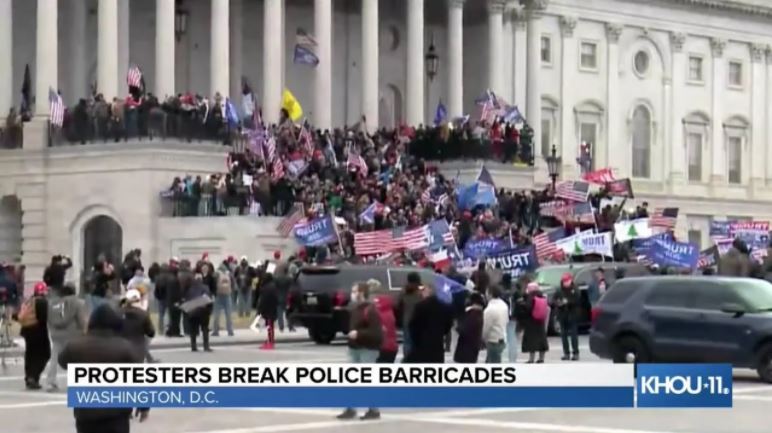 Yesterday’s events in Washington had one agenda item and one only: change the narrative from the obvious and complete theft of an American election to “Donald Trump tried to run an insurrection by defiling the Capitol. He needs to be removed immediately and denied any further political life.” As Obama’s former advisor David Plouffe said in a tweet, “His kind must not rise again.” The secondary theme employed by fascist Democrats in the House and the Senate over the past 24 hours is the description of all Trump supporters as “domestic terrorists” — a media/Democrat Party epithet which has been gaining steam ever since the November 3 election.

Like all Color Revolution insurrections conducted by the British and American establishments, the events themselves were orchestrated to create a narrative with which to pound the population. The President was not to be allowed to disrupt this narrative as Silicon Valley has completely shut down his access to social media indefinitely. Chuck Schumer, Nancy Pelosi, and traitors in the Republican Party are now floating a scenario to immediately remove President Trump through the 25th Amendment or to impeach him.

The next hours are critical and citizens must reach out to their Congressman and Senators in defense of the President. Tell them if they don’t defend the President now against attempts to illegally remove him from office and prosecute him or worse, they are done. Tell them to investigate and expose the fraud of yesterday’s staged violence in the House and Senate. Tell them if they don’t do this, they will never again hold elective office. Whatever the strange and poisonous odors emitted by the D.C. swamp, the majority of the American population which voted for Donald Trump isn’t going anywhere and will not stand down.

LaRouche PAC’s organizers on the ground January 6 in Washington, D.C. found the President’s supporters steadfastly committed to the movement Trump built and to expanding it to meet his promise to make America once again the manufacturing and industrial capital of the world and the center of profound discoveries on the frontiers of science. There was extraordinary and widespread recognition of the pioneering role of Lyndon LaRouche in creating the circumstance for overthrowing the occupation of our country by British, Wall Street, and Silicon Valley oligarchs.

Throughout the day on Thursday, January 7, Washington, D.C. and the mainstream media were pulsating with demands that the 25th Amendment be invoked or that the President be immediately removed and impeached.

Various swamp-connected cabinet officials, such as Mitch McConnell’s wife, Elaine Chao, and national security advisor Matt Pottinger, have resigned in protest against the President. The cowardly modern-day Hamlet, former Attorney General Bill Barr, condemned the President’s participation in the rally of his supporters on January 6 as a “betrayal of the presidency.”

As we remarked in our previous post on this topic, the Antifa-instigated violence erupted shortly after speakers at the President’s rally declared their intent to completely transform the moribund and corrupt GOP. Donald Trump warned that anyone who did not fight the vote fraud would be primaried in 2022 and singled out Dick Cheney and his daughter Liz for specific attack. Donald Trump, Jr. said that the Republican Party had to be remade as a fighting instrument of the forgotten men and women of the country, a party of common sense, reason, and values. Georgia State Representative Vernon Jones said it best, stating that the GOP would now become the party of Lincoln and Frederick Douglass.

That perspective and the more than 75 million people who voted for Donald Trump despite the ferocious and relentless hate and ridicule campaign conducted against him for four years and despite COVID—people who are now mobilized, focused, and angry, intent on overturning the vote fraud—has terrified the elite and they have responded with panicked and very reckless actions.

They staged a modern-day fake Reichstag Fire event on January 6, an attack on the Capitol, shortened for purposes of triumphing over it on television while legitimizing the election of the Avatar president, Joe Biden, amidst platitudes about saving “democracy.” It was so transparent that had an unarmed female Trump protester not been shot and killed in the process it would be comical. Three other Trump supporters died on the Capitol grounds due to medical events, according to the police.

This melodramatic and cheap imitation of the events in Germany on February 27, 1933, starred an Arizona Q supporter dressed as Conan the Barbarian, identifiable Antifa members from previous riots, and video of the Capitol Police virtually leading protesters into the Capitol.

Our Washington, D.C. police sources have confirmed that Antifa provocateurs and other known far-right extremists instigated the violence and that the total capitulation of the Capitol Police was incomprehensible. They have been able to match the pictures of the provocateurs to previous D.C. rioters. With respect to the Capitol Police, we believe that investigation will show the equivalent of a stand-down order was issued through Speaker Pelosi and Sen. Mitch McConnell who control the Capitol Police through various designated Congressmen and Senators. As of this writing, various officials in the Capitol security chain of command are being fired and it will be very interesting to see what they have to say about these events.

D.C. Mayor Bowser also played a key role in events at the Capitol by telling federal authorities to stay away, that security was under control between the Capitol Police, a small national guard contingent, and D.C. Metro police. Bowser, who was central in orchestrating last summer’s riots in D.C., in which the President had to be taken to a bunker by the Secret Service because of an attack on the White House, is now being hailed by the media as a modern-day savior of civic order. Her career has been extensively funded by Sir Michael Bloomberg, the Anglophilic servant of the City of London and Wall Street.

Senator McConnell’s orchestrated kabuki show certifying the fraudulent vote was preceded by almost every key funder of the Republican Party coming out of the shadows and informing their puppets what they had to do—namely, dump Trump now. In sync, the National Association of Manufacturers, the Business Roundtable, the Silicon Valley Leadership Council, the U.S. Chamber of Commerce, and, most significantly, the Partnership for New York City (Wall Street and City of London scions all) announced that there would be no more funding to Republicans who refused to desert Donald Trump en masse. Some called for the 25th Amendment to be invoked immediately. Their intention is clear—they want to prosecute Donald Trump and end the threat they believe he poses to their globalist plans.

A very good perspective piece about all of this was posted on Ron Paul’s site today by Daniel McAdams. He writes:

The mainstream media and whinging [sic] Republicans are having a panic attack over those evil people who don't like the feeling that their vote was stolen! The opportunities for “responsible” Republican virtue-signaling are endless and too intoxicating to resist.

So do we support the “occupation” of the Senate Chambers as an expression of righteous anger over the feeling that the election was stolen? Not really, because it will not achieve anything. As we said in today’s Liberty Report, the Republicans have lost both chambers of Congress mostly because they are devoid of ideas. They scream about socialism while voting for insane spending bills that only benefit the rich and well-connected. They decry the Democrat obsession with Russia as the enemy not because they know it’s bogus, but only because they want their own enemy: China! They dream of war with Iran and endless occupation of the Middle East. They drool over the prospect of more “American global leadership” without pausing for a moment to think that the rest of the world has had quite enough “leadership” from US neocons and “humanitarians.” [emphasis added]

Typically, in Georgia, the lamebrain GOP ran two candidates whose resumes had no resonance whatsoever with the MAGA movement or most human beings and now seek to blame Donald Trump for the loss of the Senate. They engaged in purely negative campaigns totally bereft of any idea content. Kelly Loeffler made millions by working with her husband in their company, the “Intercontinental Exchange. ” It owns the New York Stock Exchange and Loeffler herself engineered the setting up of an extremely lucrative credit default swap clearing house in the Cayman Islands allowing U.S. and London megabanks to avoid taxes on their purely speculative finances.

The very white and blond Loeffler was chosen by Georgia Governor Brian Kemp and Mitch McConnell over Congressman Doug Collins, who has fought for the President, to run against Raphael Warnock, the current, very personable pastor of Martin Luther King’s church. Dressing up repeatedly in denim in an awkward attempt to identify with normal people, Loeffler came across as an ice queen, repeatedly condemning Warnock as a socialist but offering absolutely no ideas for the future. Such relics of the Bushes as Karl Rove and Newt Gingrich declared Loeffler’s lifeless and mechanical debate performances “disciplined.” The other dinosaur Republican wunderkind was Senator David Perdue, the former head of Dollar General who proudly states that the key item in his resume is “outsourcing” American jobs.

Again, call your Congressmen or Senator. Tell them to fight for President Donald Trump now. The nation is at stake.