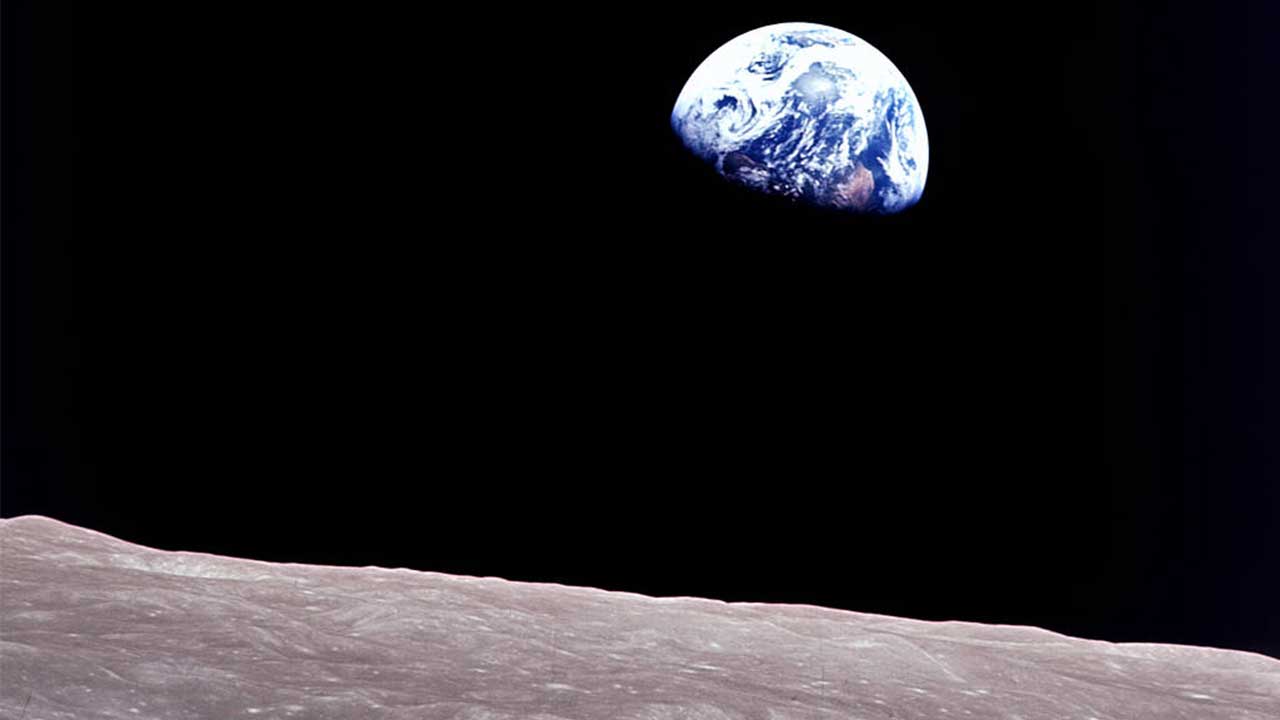 In 1968, the year Martin Luther King and Bobby Kennedy were assassinated, the Apollo 8 crew’s reading from the Book of Genesis provided a metaphor which overcame, if but briefly, that year’s awful tragedy and division.  The world watched in wonder as they viewed the earth rising above the Moon’s surface, after previously wondering whether the United States itself would survive.

Reflecting on the image of the Earth from the Moon, the poet Archibard MacLeish captured the moment in the New York Times.

“The medieval notion of the earth put man at the center of everything.  The nuclear notion of the earth put in nowhere–beyond the image of reason even–lost in absurdity and war.  This latest notion may have other consequences  Formed as it was in the minds of heroic voyagers who were also men, it may remake our image of mankind.  No longer that preposterous figure at the center, no longer that degraded and degrading victim off at the margins of reality and blind with blood, man may at last become himself. To see the earth as it truly is, small and blue and beautiful in that eternal silence where it floats, is to see ourselves as riders on the earth together, brothers in that bright loveliness in the eternal cold—brothers who know now they are truly brothers.”

So, MacLeish, with tremendous help from the National Aeronautics and Space Administration (NASA), captured the actual message of Dr. Martin Luther King and the actual promise of the space program, most recently revived by President Donald Trump in Project Artemis.

By contrast, Sen. Chuck Schumer and Rep. Nancy Pelosi, in a stunt which proves how small, evil, and incapable of vision or reason they actually are, gutted a NASA Enhanced Use Lease authorization bill in a parliamentary maneuver aimed at putting their federal takeover of elections bill before the House and the Senate. This move deprives NASA of at least another $14 million in necessary funding for a partisan fundraising ploy centered on a bill which is already doomed to fail.  Democratic Senators Manchin and Sinema are not going to change their minds. The House of Representatives passed the stunt, H.R. 5746, 220 to 203 on strict party lines with Democrats voting in favor of the bill and Republicans against. Democrats inserted 735 pages of two combined federal voting rights bills that attempt to seize control of elections, now named the so-called “Freedom To Vote: John Lewis Act”, of no relation to the original bill.

H.R.5746 was originally introduced in October by the Chair of the House Science Committee's space subcommittee, Rep. Don Beyer (D-VA). The language of that House bill dealt with extending NASA's authorization to enter into enhanced use leases, or EUL's of NASA property to companies, government agencies, or educational institutions, for 10 years. The original bill was passed with bipartisan support by a voice vote Dec. 8. The bill went back to the Senate. When the Senate sent its amended version back to the House for a vote on the extension of the  NASA  EUL Act, which lapsed on Dec.31st, that’s when Democrats acted on the demands of Democratic leadership who cooked up this bogus scheme to ram through their “making-it-easy-to-cheat” legislation.

“Democratic leadership not only withheld the text of this bill, but they deliberately kept even the subject a secret until the last possible moment. Good policy doesn’t require secrecy and schemes. This is no way to govern. What’s more, by stripping this NASA bill and replacing it with an attempt to impose federal control of elections, they have killed our only vehicle to extend NASA’s authority to lease out underutilized property and save taxpayer money."

The NASA EUL allows the agency to retain and use the proceeds derived from the lease of underutilized land and facilities. In 2022 NASA expected to collect $14 Million in net revenue from enhanced use leases. It is time to tell Biden and Democrats to stop destroying our future. Hands off our elections and hands off NASA.