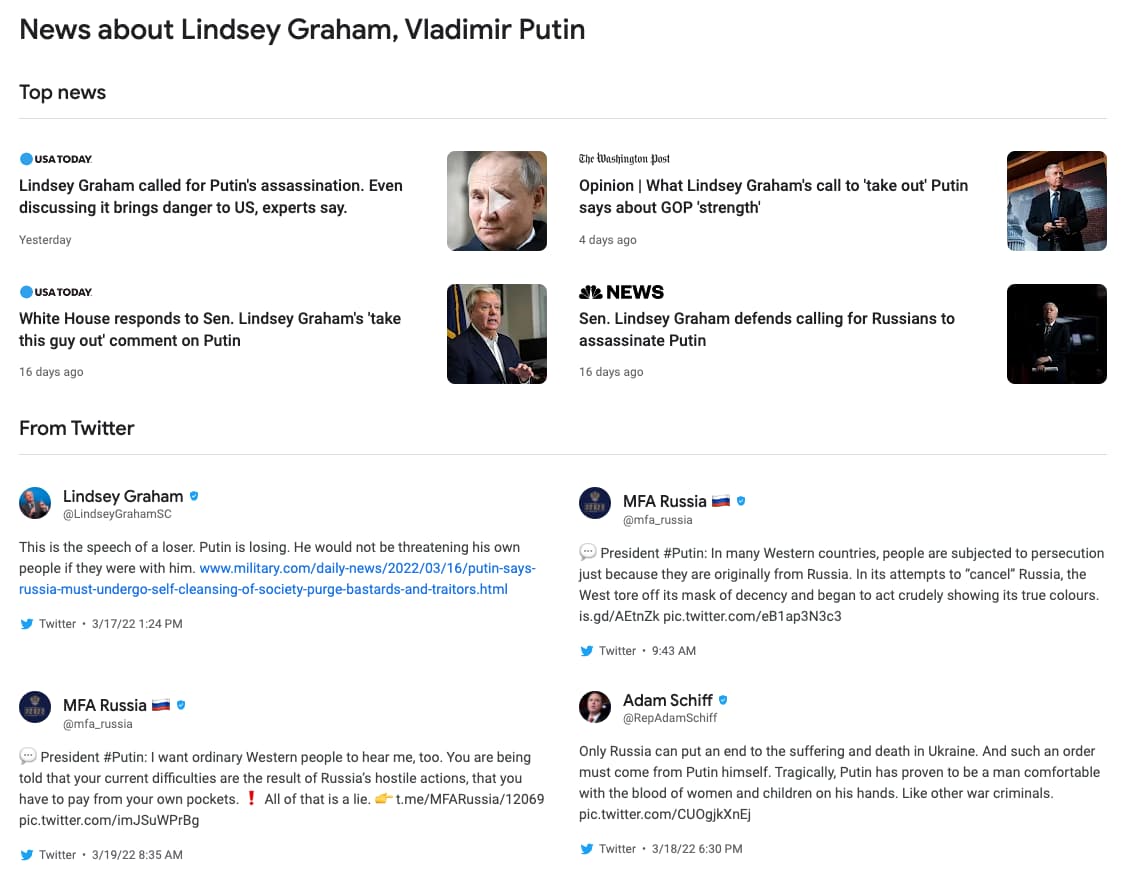 Despite the deafening roar of its propaganda, the media-Silicon Valley-deep state apparatus has so far been unable to put the American people on a psychological wartime footing against Russia.  That is what we find in talking to the American people.

Bombarding them twenty-four hours a day with an unprecedented propaganda assault, viscerally reminds them of Washington’s lies about the Iraq War, Russiagate, and censorship of Hunter Biden’s perfidies on the eve of the 2020 election--censorship totally backed by the same certified members of the National Security State who now push for war, even nuclear war, with Russia.

It’s an old and ugly fake production which can’t compete with the real financial anxiety presently encountered by Americans at the gas pump and the grocery store, or the tragedy of finding a loved one dead from the fentanyl-laced illicit drugs now flooding the country from Mexico.

Contrary to what you have heard, Ukraine has already lost the war militarily, as Col. Douglas Macgregor and other qualified specialists have shown.

Yet Lady Lindsey Graham and other brain-dead Uniparty members call for flooding arms into that country and the continued and drawn-out sacrifice of Ukrainians. It is all in pursuit of Washington’s fantasy, fed by the obsessed and deranged British, about overthrowing Putin. Lady Lindsey even thinks he is creating the pretext for assassinating Putin, which he advocates at every opportunity, further noting that “We’re not going to have a nuclear war over this. This is a bluff by Putin. . .  He may be a murderer but he is not suicidal.”  As The Federalist notes, Washington’s deluded and very imperial warmongers are mindlessly waltzing us toward a war which could extinguish the human race.

As opposed to the television’s continuous montage of atrocity propaganda featuring bombed-out buildings and hospitals, the UN reports that 816 civilian casualties have been counted in the Ukraine war to date, that is, over a period of one month.  No civilian death is less than tragic, in a war provoked by the Washington Uniparty’s use of Ukraine’s citizens as so many vassals to its lust for regime change in Russia. But, rather than stay and fight, millions of Ukrainians are fleeing their country for a better life, and they won’t be coming back. Even before the war, there was huge outmigration following the 2014 coup run by the United States and Britain, a coup which only continued the post-Soviet economic devastation of the country.

Comparatively, if you take the over 100,000 drug-overdose deaths reported last year in the U.S., we are losing 1,923 citizens per week. These deaths are now climbing at a rapid rate, particularly in the working-age population, but the Washington Uniparty tells us to focus on Ukraine--that is what is important--distracting us from their destruction of our country. Unlike Ukraine, there are no TV maps or hourly analyses showing the path of this carnage, although we know it is primarily in the area the Uniparty refers to as “the flyover states,” that is, all of the United States minus the coasts.

While Washington’s denizens imagine that their sanctions and rearming of NATO will cause the failure of the Russian state, they utterly fail to understand the people or culture they have dubbed their “enemy,” and only project the impact that the sanctions “hardships” they have imposed on Russia might have on themselves.  In 1941, Adolph Hitler launched history’s biggest-ever military operation against Russia with over four million troops. And by the time it failed, the operation had cost him four million dead. (While Russian losses, military and civilian, are estimated at 27 million.)  A fight for sovereignty in existential conditions means something quite different to a Russian than to a Brit or a denizen of Washington’s swamp.  That is why Putin’s popularity inside Russia now is over 80%.  Instead of toppling Putin, the sanctions and the current policy path are more likely to be a final step in the destruction of the United States if the people of this country do not act on what they already know and believe.

Seven trillions in Federal Reserve “quantitative easing” since 2009, were already mixing with Biden’s Green New Deal anti-energy policies and his other anti-industry and anti-agricultural policies, to lay the basis for a hyperinflationary explosion, with annual inflation now at 15%, not 7.9%, if we measure it the same way we did in the 1980s. But now the detonator appears: the insane effort to cut Russia off from the international trade and monetary system, through an unprecedented “sanctions” regime which the Biden collective began planning as early as last November.

Russia and Ukraine together have provided one-third of global wheat exports during recent years, while the fossil fuels which are being sanctioned are the feedstock for fertilizers. We recently reported, “Many [US] fertilizer retailers to farmers won’t even give prices and commitments to their farm customers, since they can’t get product secured. In Arkansas, the price of urea reportedly went from $400 per ton to as much as $1,000 per ton already in February.”

The Paris Accords, Klaus Schwab’s “Build Back Better” and the “Green New Deal” propose to deindustrialize society, to reverse the progress of civilization, through energy cutbacks based on the religion of “global warming.” Biden’s energy sanctions against Russia push in exactly the same direction, as have all his policies since his inauguration. Thus, in view of those sanctions, the International Energy Agency just released a “plan” to dramatically curtail fossil fuel use, precisely by reversing the upwards direction of historic progress in science, technology and industry, all of it justified by the War in Ukraine.   They suggest you work from home, propose measures to limit both airplane and motor vehicle transportation and, like Pete Buttigieg and Jennifer Granholm, suggest your patriotism will be judged by whether you buy an electric car.

But the most damaging boomerang effect of the Ukraine gambit may be the loss of the US dollar’s role as the premier reserve currency and the major medium of international trade. Recognizing the fact that the brain-dead Uniparty is now using the dollar’s reserve status as a weapon of war, countries all over the world are looking to settle transactions in a way which does not leave them vulnerable.

Russian Finance Minister Siluanov spoke for many when he said, “In the current situation, the move away from dollar settlements is an absolutely objective reality. More and more settlements are being made outside the dollar area.”  So far China, India, South Africa, the UAE, Saudi Arabia, and other Gulf States, and many nations in the developing sector have refused to join the deadly sanctions attack against Russia and are looking at dollar alternatives.  That is well over half of humanity in terms of population, wielding much of the world’s present manufacturing and productive capacity, while owning large chunks of U.S. treasuries.  On Friday, Biden was fully rebuked by China in his plea for China to join the effort to destroy Russia.  Xi told Biden, “He who tied the bell to the tiger must take it off,” clearly underlining that China holds the U.S. responsible for the war.

Tucker Carlson has said that many Americans would become desperately poor overnight if the world rejected the dollar, because the United States could no longer import manufactures while hardly exporting any, as we do now. China, Japan and others would no longer be willing to hold their huge trade surpluses in dollars.

The answer to this lies in U.S. citizens becoming self-conscious of the power they wield under the U.S. Constitution, something Washington’s elites contemplate in sweat-soaked fear.  The Neo-Cons and Rinos must be driven out of the Republican Party and out of any influence, as President Trump implied in his South Carolina address of Mar. 12, where he also said, “We also have to clean out the rot of our failed foreign policy establishment.... We have to continue to drain the swamp. We did a lot of it, but the swamp was deep, deeper than anybody believed."

The answer to this lies in demanding an immediate end to this war and a massive mobilization to rebuild our physical economy on a modern infrastructure and nuclear-based platform, starting with bankrupting the globalist Federal Reserve and creating a Third National Bank to fund our economic revival. Our armies should not be in Europe.  They should be sealing our border and wiping out the drug cartels now systemically killing our population.