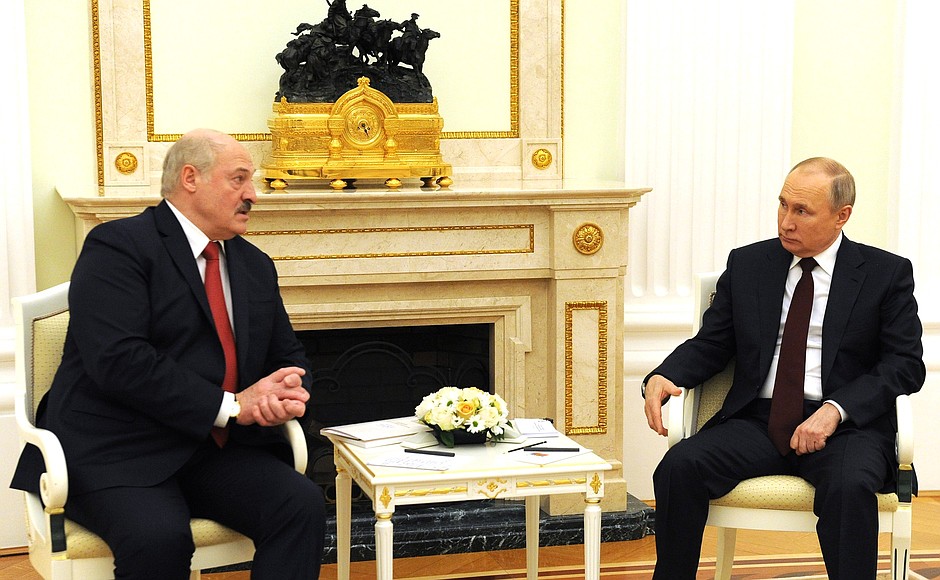 Russian President Vladimir Putin met with President of the Republic of Belarus Alexander Lukashenko who arrived in Russia on a working visit. April 22, 2021 en.kremlin.ru

Although there has been substantial coverage in the U.S. concerning President Vladimir Putin’s assertion of red lines not to be crossed, because of the information warfare being conducted by our government against its citizens, few in this country know the context for those statements.

On Saturday, April 17, the Russian Federal Security Bureau (FSB) announced that they had detained two citizens of Belarus in Moscow, accused of a planned violent coup d'etat against the government of neighboring Belarus. Their plot included the intended assassination of the President of Belarus, Alexander Lukashenko.

The two accused conspirators against Belarus detained by the Russian FSB were:

Yuri Leonidovich Zenkovich (Zyankovich), an attorney with dual citizenship in the USA and Belarus; and Alexander Losiovich Feduta, a Belarusian political scientist. According to the FSB, the two planned "a military coup in Belarus according to a worked-out scenario of 'color revolutions' with the involvement of local and Ukrainian nationalists [Neo-Nazis—ed.], as well as the physical elimination of President A. Lukashenko." The release also states that, "… the oppositionists chose the day of the Victory Parade in Minsk on May 9th this year as the date of the military coup.”

Reportedly, plotters Zenkovich and Feduta had conducted “private chats” over various platforms, and ultimately held a secret personal meeting in Moscow with opposition-minded “Belarusian generals.” Zenkovich's arrival in Moscow for the meeting took place after consultations in the USA and Poland, according to the FSB. During their Moscow meeting, the plotters said that for their plot to succeed, it was necessary to physically eliminate practically the entire top leadership of the [Belarusian] republic. The coup was to turn Belarus over to the “Committee of National Reconciliation,” headed by self-exiled former Belarusian Presidential candidate Svetlana Tikhanovskaya.

However, the plotters' Moscow meeting was not as “secret” as planned: It was filmed by Putin's FSB. The two were then detained by the Russians, and turned over to Belarus law enforcement. The videos of the plotters' “secret meeting” were released publicly and aired on nationwide Russian television, including the audio and transcripts of the plotters' comments.

An explicit response by the Putin government to the coup plot was not long in coming. When President Vladimir Putin delivered his annual “Federal Assembly” address on Wednesday, April 21, most of which focused on Russia's response to the COVID-19 pandemic and on the Russian economic situation, Putin also addressed the coup plot against Belarus, saying: “I am referring to the recently exposed direct interference in Belarus in an attempt to orchestrate a coup d'etat and assassinate the President of that country . . . ” He compared the coup plot against Lukashenko to [Biden’s] violent overthrow of President Yanukovich of Ukraine (in Feb 2014), and added, “but the practice of staging coups d'etat and planning political assassinations, including those of high-ranking officials—Well, this goes too far. This is beyond any limits.”

He continued: “Suffice it to mention the admission made by the detained participants in the conspiracy about a planned siege of Minsk, including plans to block the city infrastructure and communications, and a complete shutdown of the entire power system in the capital of Belarus! This actually means they were preparing a massive cyberattack.”

“We really do not want to burn bridges,” Russia’s president noted. “But if someone mistakes our good intentions for indifference or weakness and intends to burn or even blow up these bridges, they must know that Russia's response will be asymmetrical, swift and tough . . . Those behind provocations that threaten the core interests of our security will regret what they have done in a way they have not regretted anything for a long time . . . I hope that no one will think about crossing the 'red line' with regard to Russia. We ourselves will determine in each specific case where it will be drawn.”

Putin went on to discuss the readiness of the armed forces to defend Russia and her allies, and the qualitatively new strategic and other weapons systems now or soon to be available for this.