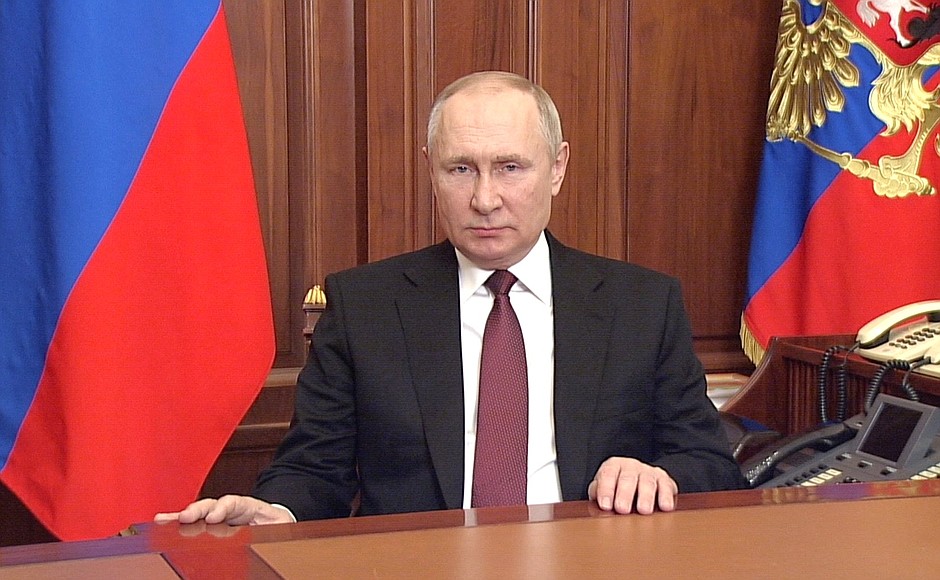 The following excerpt from Russian President Vladimir Putin’s February 24 address to his nation and the world contains an important analysis of the “post-Cold War” policies of the world’s global elites and should be read and contemplated by Americans who themselves have rejected the policies of that Western elite.  The only corrective we would add to it is that Putin makes a mistake in focusing on the United States as the primary player against Russia and the world.  In reality, since the death of Franklin Roosevelt, the United States has been an occupied country, largely serving as a pawn of the modern globalist British Empire.  It has served as a global gendarme enforcing the imperatives of that Empire, not its own security interests. The Russiagate coup against Donald Trump should have clarified the actual enemy.

“What I am saying now does not concern only Russia, and Russia is not the only country that is worried about this. This has to do with the entire system of international relations, and sometimes even US allies. The collapse of the Soviet Union led to a redivision of the world, and the norms of international law that developed by that time – and the most important of them, the fundamental norms that were adopted following WWII and largely formalized its outcome – came in the way of those who declared themselves the winners of the Cold War.

Of course, practice, international relations and the rules regulating them had to take into account the changes that took place in the world and in the balance of forces. However, this should have been done professionally, smoothly, patiently, and with due regard and respect for the interests of all states and one’s own responsibility. Instead, we saw a state of euphoria created by the feeling of absolute superiority, a kind of modern absolutism, coupled with the low cultural standards and arrogance of those who formulated and pushed through decisions that suited only themselves. The situation took a different turn.

There are many examples of this. First a bloody military operation was waged against Belgrade, without the UN Security Council’s sanction but with combat aircraft and missiles used in the heart of Europe. The bombing of peaceful cities and vital infrastructure went on for several weeks. I have to recall these facts, because some Western colleagues prefer to forget them, and when we mentioned the event, they prefer to avoid speaking about international law, instead emphasizing the circumstances which they interpret as they think necessary.

Then came the turn of Iraq, Libya and Syria. The illegal use of military power against Libya and the distortion of all the UN Security Council decisions on Libya ruined the state, created a huge seat of international terrorism, and pushed the country towards a humanitarian catastrophe, into the vortex of a civil war, which has continued there for years. The tragedy, which was created for hundreds of thousands and even millions of people not only in Libya but in the whole region, has led to a large-scale exodus from the Middle East and North Africa to Europe.

A similar fate was also prepared for Syria. The combat operations conducted by the Western coalition in that country without the Syrian government’s approval or UN Security Council’s sanction can only be defined as aggression and intervention.

But the example that stands apart from the above events is, of course, the invasion of Iraq without any legal grounds. They used the pretext of allegedly reliable information available in the United States about the presence of weapons of mass destruction in Iraq. To prove that allegation, the US Secretary of State held up a vial with white power, publicly, for the whole world to see, assuring the international community that it was a chemical warfare agent created in Iraq. It later turned out that all of that was a fake and a sham, and that Iraq did not have any chemical weapons. Incredible and shocking but true. We witnessed lies made at the highest state level and voiced from the high UN rostrum. As a result, we see a tremendous loss in human life, damage, destruction, and a colossal upsurge of terrorism.

Overall, it appears that nearly everywhere, in many regions of the world where the United States brought its law and order, this created bloody, non-healing wounds and the curse of international terrorism and extremism. I have only mentioned the most glaring but far from only examples of disregard for international law.

This array includes promises not to expand NATO eastwards even by an inch. To reiterate: they have deceived us, or, to put it simply, they have played us. Sure, one often hears that politics is a dirty business. It could be, but it shouldn’t be as dirty as it is now, not to such an extent. This type of con-artist behavior is contrary not only to the principles of international relations but also and above all to the generally accepted norms of morality and ethics. Where is justice and truth here? Just lies and hypocrisy all around.

Incidentally, US politicians, political scientists and journalists write and say that a veritable “empire of lies” has been created inside the United States in recent years. It is hard to disagree with this – it is really so. But one should not be modest about it: the United States is still a great country and a system-forming power. All its satellites not only humbly and obediently say yes to and parrot it at the slightest pretext but also imitate its behavior and enthusiastically accept the rules it is offering them. Therefore, one can say with good reason and confidence that the whole so-called Western bloc formed by the United States in its own image and likeness is, in its entirety, the very same “empire of lies.””