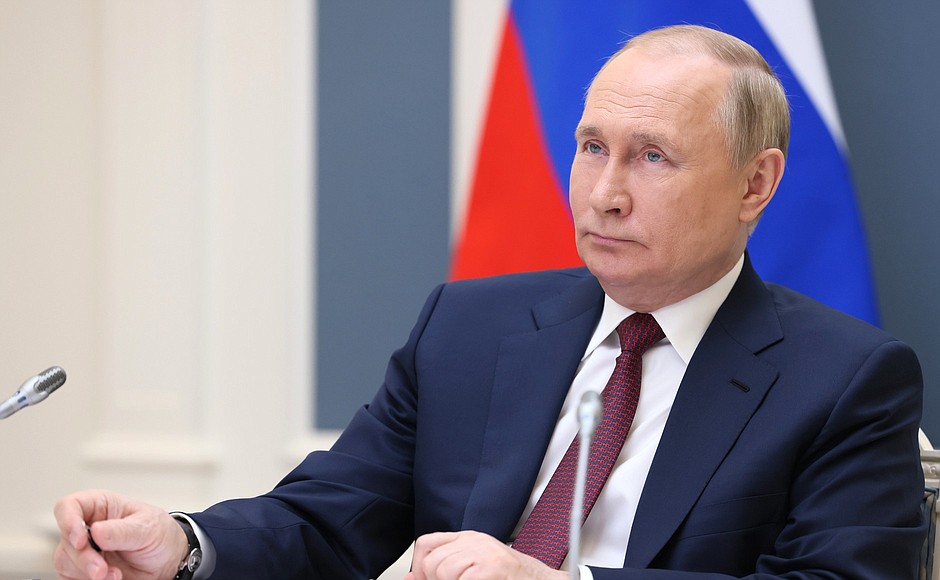 Russian President Putin during the First Eurasian Economic Forum (via videoconference). May 26, 2022 en.kremlin.ru

On September 24, 2019, speaking before the United Nations General Assembly in New York, U.S. President Donald Trump declared, “Wise leaders always put the good of their own people and their own country first.  The future does not belong to globalists.  The future belongs to patriots.”

President Trump’s words amounted to a declaration of war against the international financial elite who, since 2008, have embarked on a savage war against every nation in the world.  Beginning with the 2020 world-wide Covid lockdowns, that war has escalated in its brutality, and has now been unleashed in all its fury since the coup which brought the treasonous administration of the demented Joe Biden into power in Washington, D.C.  The global economy has been devastated, war is being pushed everywhere by the neo-imperialists, and the people are being destroyed.

As we move into June 2022, we now see an unhinged oligarchy desperately trying to impose their will on nations, but what they are finding is that many of their former underlings are no longer willing to obey orders.  Oligarchical frustration was on clear display at the recently concluded World Economic Forum Davos Conference at Davos.  Incredible outbursts, such as the President of the United States calling for “regime change” in Moscow, elected officials demanding the assassination of Putin, and British Prime Minister Boris Johnson proposing the creation of an anti-Russian “European Commonwealth,”—statements which once would have been labeled as psychotic—are now routinely reported in the legacy media.

For the average citizen, this is a world gone mad.

In contrast to the suicidal compulsions we see in London, Brussels, Washington D.C., Berlin and Paris, the speech by Vladimir Putin at the May 26 Eurasian Economic Forum comes as a “West Wind,” a refreshing reminder that there is a pathway out of this crisis.

In his remarks, President Putin made short shrift of the sanctions and other attacks on Russia which have been unleashed since the initiation of Russia’s Special Military Operation in the Ukraine.  After describing the current efforts to isolate, intimidate and destroy Russia, Putin bluntly stated, “Nobody will be able to isolate such a country as Russia.”

Putin’s speech was characterized by both iron determination and supreme confidence.  He stated, “These sanctions and bans are aimed at constraining and weakening the countries that are pursuing an independent policy, and they are not limited to Russia or even China.  I do not doubt for a second that there are many countries that want to and will pursue an independent policy and their number is growing. No world policeman will be able to stop this global process.”

In demonstrating why Russia has defeated the sanctions, Putin focused on two related topics:  first, Russia’s intensive efforts to develop what some might call a “full set” economy, i.e. to develop within her own borders the key productive industries critical to the nation’s future; and second, the fraternal cooperation with other nations, particularly in Eurasia, in a project of nation-building, centered on the development of manufacturing, agriculture, energy and frontier areas in the field of technology.

He added, “Import substitution was necessary to create not just assembly shops, but also engineering centers and research centers.  This is inevitable for any country that wants to increase its economic, financial, and ultimately political sovereignty.  It is inevitable.”

His conclusion: “Everything can be adjusted; everything can be built in a new way.  Not without losses at a certain stage, but it leads to the fact that we really become stronger in some ways.  In any case, we are definitely acquiring new skills and are starting to focus our economic, financial, and administrative resources on breakthrough areas.”

Putin pointed to the progress already accomplished: “The Eurasian Economic Union has developed a roadmap for industrialization, with over 180 projects with a total investment of over $300 billion. A program for agricultural development has been prepared, including more than 170 projects worth $16 billion.”

Putin stressed that these policies of economic development will be governed by agreements among sovereign nation-states and will not be subject the diktats of the World Trade Organization or any other supra-national agency.  He pointed to the agreements already accomplished by the member nations of the Eurasian Economic Union, but he stressed that this process will now spread to other nations in Asia, Africa, and Latin America.

The strategic implications of all of this are profound.  Despite the gnashing of teeth among the globalists and financial oligarchy, we are moving into an entirely new global reality.

The challenge posed to the American citizenry is that if we are to rebuild our own nation and get off the current drive toward war and destruction, we must free America from imperialist globalist domination.  This requires the complete removal of all of the uni-party traitors who dominated our institutions from 2001 to 2017 under Bush and Obama, and it means ending imperial financial rule by freeing America from the Central Banking System, abolishing the Federal Reserve and reestablishing Constitutional National Banking methods.  We desperately need our own nation-building policy.

This Saturday, I will join Brian Lantz in a three-part class series exploring the necessary steps.  I hope you will join us.