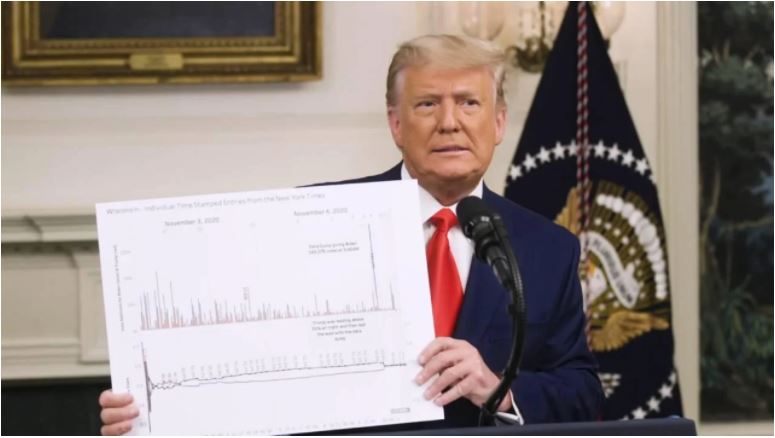 What is it about Donald Trump that his supporters love and which sends our arrogant, corrupt, and decadent elite into rug chewing fits? It’s simple. He fights for the forgotten men and women. And he does this on behalf of the Constitution of the United States—that which makes this nation exceptional. He does this regardless of the billion-dollar efforts coming from the City of London, Wall Street, and their media and Silicon Valley titans to paint him as a crude, hapless clown. In fighting, he keeps pulling the curtain down, exposing the would-be wizards of the transatlantic intelligence community rigging the game.

Last night, December 2, the President of the United States delivered a 45-minute address to the people exposing the most massive vote fraud in history, occurring in the Presidential election of November 3. You can and should watch that speech here if you haven’t already.

He put it, appropriately, in the context of the four-year coup which has been conducted against the Presidency, a coup whose key players include the putative president-elect, Joe Biden, and everyone Biden would appoint as his cabinet. President Trump’s message was simple. This election fraud cannot and will not stand. We will fight and never give up. This is the movement we are building to retake our country. But we will do so on behalf of saving the Constitution, not trashing it or suspending it as some would have it.

The response of the wizards has been to run psychological warfare operations using profiles of the President’s supporters. The most recent ones call for suspending the Constitution and imposing martial law, in order to conduct a re-vote overseen by the military. The same operation attributes the fraud actually conducted by the transatlantic intelligence community to China, Iran, and North Korea. It also seeks to deliberately suppress the Trump vote in Georgia, with control of the U.S. Senate at stake. The proponents include an apparently temporarily disoriented General Michael Flynn, attorney Sidney Powell, and attorney Lin Wood.

If you think about that, it is a classic call, in military terms, for a suicidal flight-forward. It is based on the idea that 75 million people who voted for the President somehow are underlings who can never win the actual battle against the few who have repeatedly demonstrated their corruption, decadence, and incompetence. The psyop rewards the elites with some sort of magical power while encouraging impotent rage in those who would oppose them. This battle will be won only when we replace the present governing class with patriots equipped to govern on the basis of the unique American System of economy and those philosophies regarding the nature of man in a creative universe associated with Ben Franklin and Alexander Hamilton and carried forward by Abraham Lincoln, Franklin Roosevelt, and Lyndon LaRouche. It is nascent now in the movement built by Trump. That task takes intelligence, patience, and the same steely determination our founders employed.

The fraudster wizards are using very old and well-known methods. This is how the British manipulated John Brown’s premature and suicidal assault on Harper’s Ferry. This is how the British subverted the attempt to bring the American Revolution to France, ending in the Jacobin bloodbath. Don’t fall for it. Brave patriots have come forward to support the President and are telling the story of the fraud, determined to win the battle no matter what the enemy throws at them. Stick with the President’s Constitutional approach and the sublime determination shown by our Founding Fathers and those fighting today.

We will win by educating the populace and causing them to act in ways which are extraordinary, not by exploiting their anger, anxiety, and justified outrage. As Fredrich Schiller said of the French Revolution: “A great moment found a little people.” That’s what the wizards and fraudsters are trying to repeat. We won’t let that happen.

LaRouche PAC will be providing further materials about this in the next days.