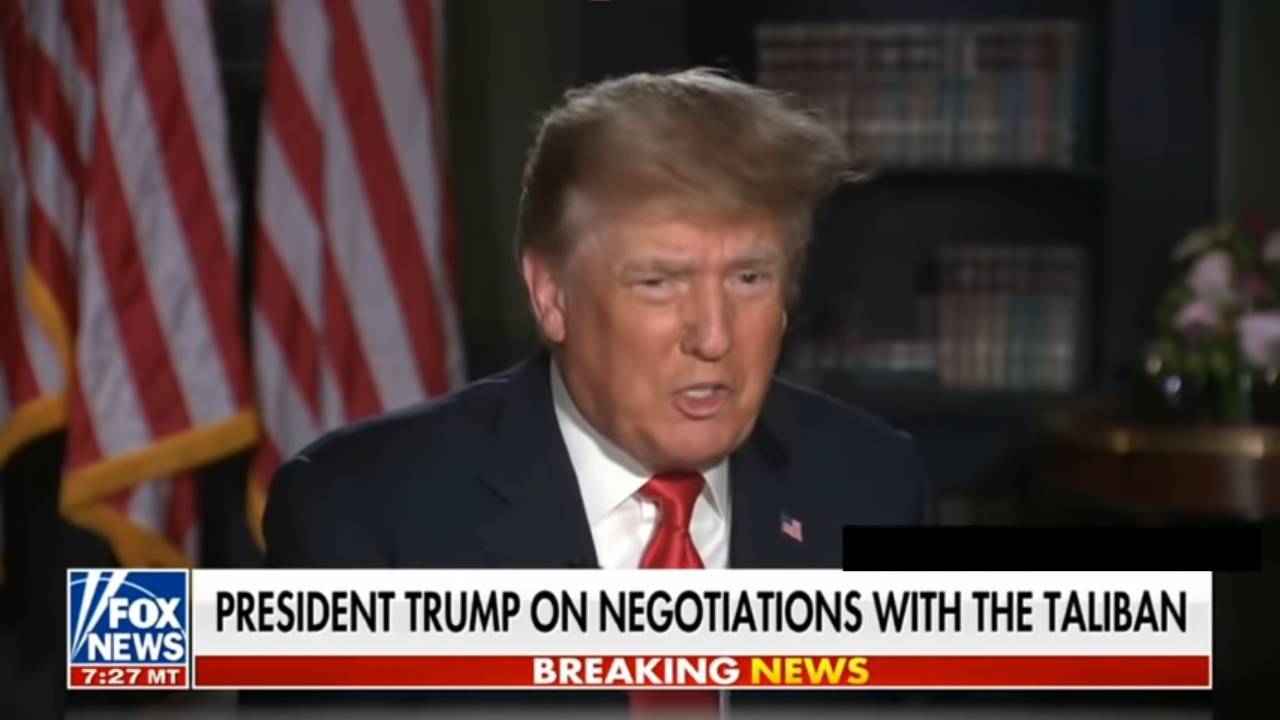 President Trump appeared on Sean Hannity’s show Tuesday night.  While billed as a defense against the ludicrous charge by the incompetent and listing Biden collective that the present debacle in Afghanistan was caused by Trump, President Trump went “off script” in the words of London’s Independent.

By “off script” the Independent refers to Trump’s attack on the Bush family in the interview.  Trump held the Bush family responsible for the entire American debacle in the Middle East of which Afghanistan is a part.  The entire post 9/11 debacle, Trump noted, had killed millions of people, and destroyed the Middle East for no good purpose.  He also pushed back on Sean Hannity’s efforts to script him against Russia and China in narratives presently being pushed by the war party.

A visibly angry Trump opened his remarks with the tragedy unfolding in Afghanistan: “It’s a terrible time for our country.  I don’t think, in all of the years, our country has been so humiliated.  I don’t know, would you call it a military defeat or a psychological defeat?  There’s never been anything like what’s happened here.”

He went on to describe the frantic scene at Kabul Airport with desperate people fleeing for their lives by grabbing onto a departing U.S. C17 and falling to their deaths from 2,000 feet.  President Trump then described his talks with the Taliban while dismissing the hysteria of the neocons about his negotiating with “terrorists.”  You negotiate with the people “who are the problem” Trump said.  He also took on those criticizing his decision to end the war, hysteria which he said occurred on Fox and on Hannity’s own show.

The U.S. was spending $43 billion a year on a war which was being conducted by bribing Afghans to support the government of Ashraf Ghani, who Trump, noted pointedly, was a crook.    Ghani, Trump said, spent his ample funds wining and dining various U.S. Senators who were “in his pocket,” creating problems for his White House.

Trump outlined what went on between himself and Mullah Baradar, who now appears to be in the driver’s seat in Afghanistan. Trump said he told Baradar that if during talks anything bad happened to an American, the U.S. would strike back with huge force, naming the village where Baradar and his family live.  He noted, correctly, that during the time of the Trump/Taliban negotiations not a single U.S. solider was killed.  He said that during this time an American would be safter in Afghanistan than on the streets of the nation’s cities controlled by Democrats where the dead now pile up every weekend.

Trump said, “I know the Bush family will not be happy, but I believe it was the worst decision in the history of our country when we decided to go into the Middle East.  It’s turned out to be quicksand.  We have destroyed the Middle East.  Do you think it’s better now than it was 20, 21 years ago? It’s much worse.  It was a horrible decision, cost us trillions of dollars and, if you look at both sides, because I like to look at both sides, millions, and millions of lives. . . It’s much worse because you have to rebuild it.  It has been blown to pieces.”

President Trump noted that his exit plan involved getting all the Americans and allies, including allied Afghans, out of the country, getting American military equipment out of the country, blowing up American bases, and, only then, exiting the country militarily, provided the Taliban had complied with all the conditions set for American withdrawal. Instead, Joe Biden has left more than 10,000 Americans stranded, receiving emails from the State Department to go to the Kabul airport while insisting that the United States government cannot guarantee their safety enroute.