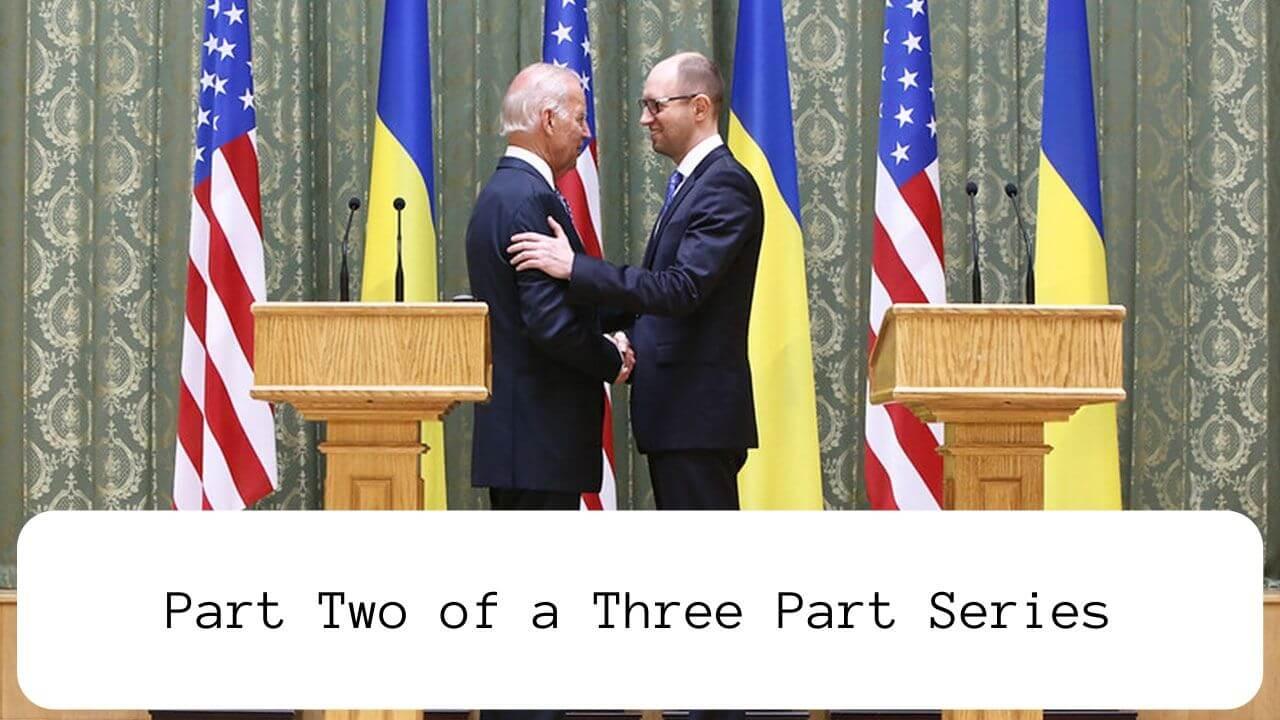 In 2013-2014, the Obama Administration, in conjunction with NATO and the UK government, conducted a coup d’etat in Ukraine, replacing its duly elected president, Viktor Yanukovych, with a U.S./British asset, Arseniy Yatsenyuk. Typical of the nature of the coup was the recorded call between the State Department’s Victoria Nuland and U.S. Ambassador Geoffrey Pyatt, in which Nuland dictated that “Yats” (Yatsenyuk) would be the prime minister, and noted that to make all of this work, she had received a call from Jake Sullivan, saying that “you need Joe Biden” and that the Vice-President was “ready to go.”

In 2013-2014, the Obama Administration, in conjunction with NATO and the UK government, conducted a coup d’etat in Ukraine, replacing its duly elected president, Viktor Yanukovych, with a U.S./British asset, Arseniy Yatsenyuk. Typical of the nature of the coup was the recorded call between the State Department’s Victoria Nuland and U.S. Ambassador Geoffrey Pyatt, in which Nuland dictated that “Yats” (Yatsenyuk) would be the prime minister, and noted that to make all of this work, she had received a call from Jake Sullivan, saying that “you need Joe Biden” and that the Vice-President was “ready to go.”

Sullivan had been one of Hillary Clinton’s main advisors and was now working for Biden. Biden became the Obama Administration’s point man on Ukraine, a modern viceroy, instructing then-President Poroshenko so frequently about the minutiae of whom to nominate and how to behave, that even Poroshenko himself finally turned on him.

The fascist nature of the coup was very well known at the time. Here is the Guardian from January 29, 2014:

You’d never know from most of the reporting that far right nationalists and fascists have been at the heart of the protests and attacks on government buildings. One of the three main opposition parties heading the campaign is the hard-right, antisemitic Svoboda, whose leader Oleh Tyahnybok claims that the “Moscow-Jewish mafia controls Ukraine.” The party, now running the city of Lviv, led a 15,000 march earlier this month in memory of the Ukrainian fascist leader Stepan Bandera, whose forces fought with the Nazis in the Second World War and took part in massacres of Jews. 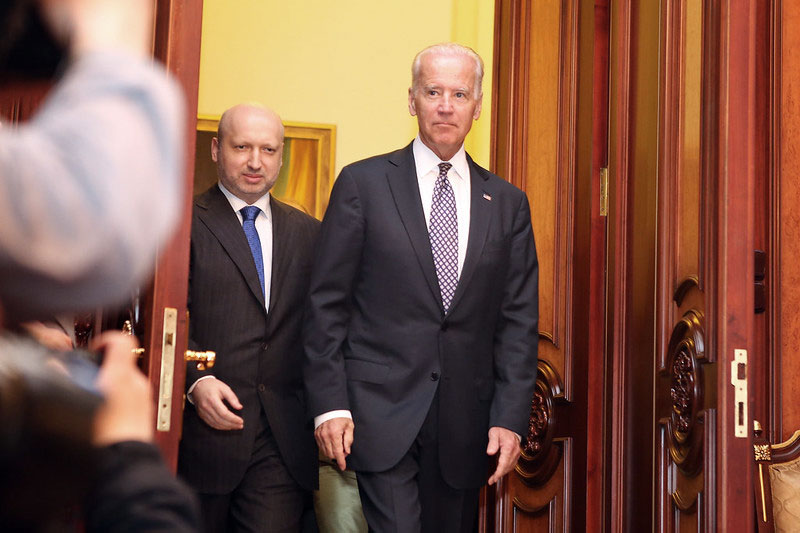 The coup occurred as a NATO doctrine called “Prompt First Strike” had been put on the table. Most importantly, Ukraine was taken over with the implicit idea that it was now a part of NATO, rather formerly or not. The Bush Administration, following the fall of the wall in Berlin, had promised the Russians that they would do nothing like this and would leave Russia with defensible borders. Now, doctrines about first strike nuclear warfare and nuclear war survivability were a persistent feature of U.S. and British defense strategies along with propaganda operations and dissident movements in Russia aimed at removing Putin. Now, Russia had a vassal state, Ukraine, sitting right on its border, under British and U.S. control. The implications were hardly lost on the Russians. It was a nuclear threat of existential portions, cut off most Russian naval access except through the Artic, and yielded control of the gas transit pipes from Russia to Europe to the Anglo-Americans, jeopardizing the Russian economy.

As the result of the coup, Ukraine’s finances were put in the hands of foreigners, most notably the Ukrainian-American Natalie Jaresko, then serving as Chief of the Economic Section at the U.S. Embassy in Ukraine, who became Finance Minister. The late Robert Parry wrote a devastating exposé in Consortium News, Feb. 18, 2015, of Jaresko’s prior activity parlaying USAID funding in Ukraine into various insider investment deals for herself and others, prior to her assumption of her new post. Other foreigners installed at the behest of the IMF and British and U.S. investors, had similar strange backgrounds and conflicts. They included, for example, the U.S./British asset Mikheil Saakashvili of Georgia, who became Odessa’s Governor after leading a similar color revolution for the U.S. and Britain in his own country.

Biden’s and Victoria Nuland’s midwifery resulted in a government which had the full participation of the neo-Nazis of the Svoboda Party and other Right Sector fanatics, who were rewarded for their role as provocateurs and shock troops in the Maidan coup. The oligarchs actually running the country were simply reshuffled under Joe Biden, with the sole requirement for success being an expressed hatred of Russia. Under Biden’s support of a ruthless IMF austerity and privatization program, Ukraine, once a vibrant manufacturing and agricultural center, has now descended to become the poorest country in all of Europe.

Biden Uses the Neo-Nazis Against Russia

Joe Biden’s association with neo-Nazis in Ukraine has been continuous. In 2018, his chief foreign policy advisor, Michael Carpenter, welcomed Andrey Parubiy, the speaker of the Parliament in Ukraine, to Washington, and escorted him around town. Parubiy personally founded two neo-Nazi formations. When Carpenter was confronted by journalist Max Blumenthal with this fact, he claimed, falsely, that Parubiy was simply a nationalist and patriot. See Blumenthal’s write-up posted in the Grayzone.

As 2014 progressed, elections were held, and the oligarch favored by the U.S. and the British, “chocolate king” Petro Poroshenko, was elected President, with Yats as Prime Minister. The neo-Nazis were absorbed into the government and into the war against the citizens of the Donbass who refused to accept the coup’s results. The Banderists became part of the Ukrainian National Guard and received further U.S. and British military training and weapons, under the regime of the brutal Interior Minister Arsen Avakov.

Thanks again to the excellent reporting of Max Blumenthal, we know that one of these groups, the Azov Battalion, has, in turn, trained neo-Nazis internationally, including the Christchurch, New Zealand shooter, the “Rise Above” white nationalists in Orange County, California, and participants in the Charlottesville, Virginia riot in the U.S. It is a token of Joe Biden’s unbounded hubris that he opened his campaign with an attack on President Trump for causing Charlottesville, when the very same Azov Battalion had trained the neo-Nazi provocateurs who precipitated that event.

Burisma, the gas company, whose board Hunter Biden and his partner Devon Archer joined in the spring of 2014, is nominally owed by Mykola Zlochevsky, an oligarch who, as former Minister of Natural Resources for Ukraine, issued major gas and oil licenses to companies he owned. Archer, a former bundler for John Kerry in his 2004 campaign, and Christopher Heinz, John Kerry’s stepson, together with Hunter Biden, were partners in the private equity company Rosemont Seneca Partners, which had been staked with major dough from the Heinz family fortune, courtesy of John Kerry’s wife, Teresa Heinz Kerry.

According to news reports, when Christopher Heinz heard about Archer and Biden joining Burisma’s Board, he immediately withdrew from association with the separate corporate vehicle set up for that deal. He recognized the obvious problem: The leaders of the coup and Joe Biden had pounded on the theme of ending Ukraine’s notorious corruption as a raison d'être of the coup; Burisma was notoriously corrupt.

Nonetheless, John Kerry’s former Chief of Staff in the Senate, David Leiter, now became Burisma’s chief lobbyist in Washington. Bell Pottinger had been its chief lobbyist in London. It’s unclear whether that notorious British firm, the author of numerous fake and horrific videos in the run-up to the Iraq War, retained its contract on the British side after Hunter Biden joined Burisma’s board.

At the time, Zlochevsky was under investigation for money laundering by Britain’s Serious Fraud Office, which froze $23 million in his City of London bank accounts. But the licenses owned by Burisma, then Ukraine’s largest gas and oil company, were critical to the Biden/State Department effort to end Ukraine’s gas imports and transit of Russian gas to Europe, and to open up the country for exploitation by Royal Dutch Shell, Chevron, and others. In April 2014, Joe Biden arrived in Ukraine with an offer of American experts to speed up Ukraine’s gas production, most specifically fracking in the eastern part of the country where Burisma held licenses. He came with a full package from USAID, and a Congressional agenda in Washington promising even more money to exploit Ukrainian fracking production.

Joe Biden’s advocacy for seizing Ukraine’s natural gas assets had been a driven obsession of his since at least 2011, when he declared in a speech at the Atlantic Council that the policy was key to unifying NATO and Europe against Russia. Biden was proposing war on Russia’s economy and, in 2014, he needed to control Burisma, with its land and resources, to pursue this mad obsession. Do you really think, now that you understand the context, that Joe Biden didn’t really know anything about Hunter Biden’s position on Burisma’s board and its meaning? But that is exactly what Joe Biden and his media PR lobby have said repeatedly, for weeks now.

Adding to the proof that Joe Biden is lying, is the fact that the entire New York Times editorial board, in the December 25, 2016 issue publicly called both Bidens out for conflicts of interest in their Ukraine activities, something which really would not go unnoticed in an Obama White House, preoccupied 24/7 with virtue signaling.

Further, at the time Hunter Biden joined Burisma’s board, he was also on the Chairman’s Advisory Committee of the National Democratic Institute, a division of the National Endowment for Democracy, and a big player in the Ukraine coup. He also served on the boards of other hardline Democratic foreign policy groups associated with Madeline Albright, the Chairman of the National Democratic Institute and Bill Clinton’s Secretary of State. Albright, of course, is most remembered for what she said when asked in 1996 if the deaths of half a million Iraqi children, as a result of her sanctions policy against Saddam Hussein, were worth it. She said, “This is a very hard choice, but we think the price is worth it.”

Complicating the picture even further, Burisma appears to be actually owned by the Ukrainian oligarch and Russia hater, Ihor Kolomoisky, who also owned Ukraine’s largest financial institution, Privat Bank, according to multiple investigators. Kolomoisky has also sponsored, until recently, the entire political career of the newly elected president, Volodymyr Zelensky. Kolomoisky is famous for violent attacks, using armed thugs and baseball bats, on companies he is taking over as a “raider,” and his criminal actions had warranted a travel ban to the United States as well as multiple investigations. His stomping ground was in Donetsk, in the Donbass, and Kolomoisky was a major funder and promoter of the Kiev-aligned troops deployed against the citizenry there. He was also the major funder of such neo-Nazi gangs as the Azov Battalion.

As documented by author Peter Schweizer in his book, Secret Empires, $1.8 billion in U.S. taxpayer loans—championed by Joe Biden and Secretary of State John Kerry to stabilize Ukraine’s post-coup economy—went into Kolomoisky’s Privat Bank and simply disappeared. By 2016, Ukraine nationalized Privat Bank after discovery of a variety of insider-lending schemes. This tale is typical of U.S. taxpayer funds directed to Ukraine, where corruption remains absolutely rampant.

Based on documents released in Ukraine and the United States over the last days, the Hunter Biden and Devon Archer haul for providing PR legitimacy to Burisma is now estimated to run at somewhere near $3 million. But by 2017—as the result of the PR efforts for which Biden and Archer were the Washington faces, and the firing of Ukrainian prosecutor and Burisma investigator, Victor Shokin, for which Joe Biden claims credit—Burisma had been cleared, at least temporarily, of all criminal charges, and Kolomoisky’s travel ban had been lifted. Remember, as opposed to President Trump, Joe Biden bragged openly that he held up loans to Ukraine until Shokin was fired. And, fittingly, as of 2017, Burisma had formed a partnership with the Atlantic Council, featuring Burisma’s $250,000-a-year grant to that entity, to promote, among other things, “anti-corruption” activities in Ukraine!