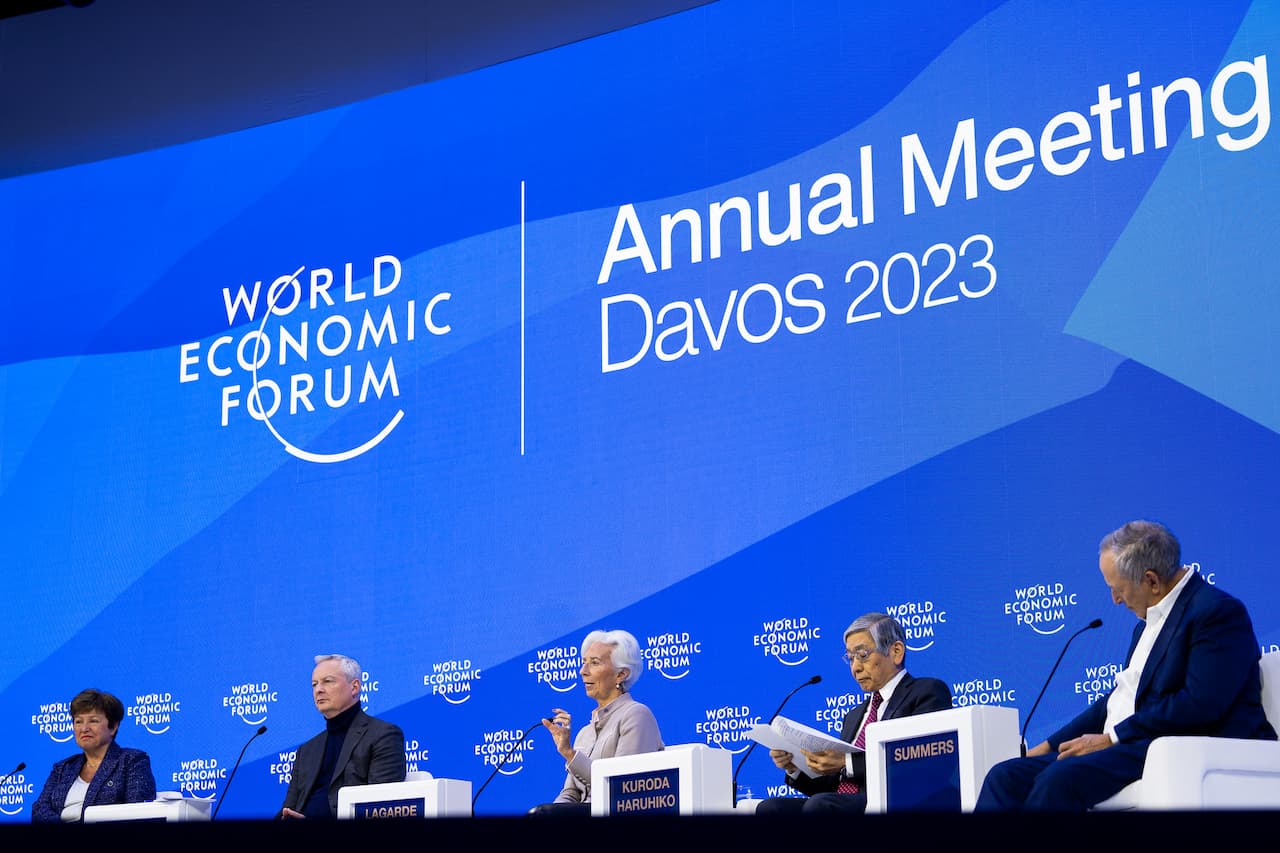 On the one level, the hundreds of speakers at last week’s Davos World Economic Forum (WEF) repeated the well-worn utopian schemes familiar from all their previous meetings, calling for their anti-human “Climate Change” agenda; for their anti-industrial “Environmental, Social and Governance” investment straitjacket; for “Central Bank Digital Currencies” (CBDC) to eliminate all national sovereignty; for universal digital surveillance and censorship; and for Klaus Schwab’s chimerical “Fourth Industrial Revolution.”

But in reality, nothing was the same and everything has changed. In reality, the lavish weeklong spectacular was all one long shriek of desperation, to wit: “We must win the Ukraine War against Russia! Nothing else counts! There is no alternative!” JPMorgan Chase CEO Jamie Dimon summed it up by saying Ukraine could be an “inflection point for the Western world”: “The only thing that matters for the future of the world is how this thing plays out.”

To this end, the whole guest-list had been skewed to the European Union and NATO, with special emphasis on those European Union (EU) and NATO countries from Central and Eastern Europe which were members of the former communist Warsaw Pact, and are often the most hostile to Russia. The Forum was opened with a ten-minute demand for help from Olena Zelenska, the wife of the Ukrainian dictator, who said, “We are facing a threat of the collapse of a world as we know it,…”

Then the unofficial Keynote Address was given by the EU’s chief harridan Ursula von der Leyen, President of the European Commission, who began:

“Ladies and Gentlemen. For one year now Ukraine has stunned the world. On that fatal February morning, many predicted that Kyiv would fall in a matter of days, but this did not account for the morale and physical courage of the Ukrainian people.

“Dearest Olena, you and your people, have resisted the Russian invasion and push back against the aggressor against all odds.

“Dearest Olena. Not even Russia's severest attacks on civilians that you have described or the brutal winter have shaken your resolve. In this last year, your country has moved the world and has inspired Europe and I can assure you that Europe will always stand with you.

“Many doubted whether European support would be so unwavering, but today Ukraine is a candidate country to access the European Union. European countries are providing more and more critical weapons to Ukraine. We are hosting around four million Ukrainians in our cities, our homes, and our schools. We have put in place the strongest sanctions ever, which leave the Russian economy facing a decade of regression and its industry starved of any modern and critical technologies. There will be no impunity for these Russian crimes.”

Europe is united; Europe is unwavering, “Europe will always stand with you,” she bleated, and the same message was repeated all week. They said it all the more fervently, precisely because they knew it was untrue.

The proof of this came out on Friday, Jan 20, at the huge Ramstein Air Base in Germany, our largest foreign military base, which hosted the eighth meeting of the 50-nation Ukraine Contact Group. (Effectively a charity bidding-auction for weapons and military aid for Ukraine.) Recent weeks had seen a hysteria to supply Main Battle Tanks (MBTs) to Ukraine, and Germany was supposed to offer about 100 of its Leopard MBTs at this meeting—but Germany refused. German Defense Minister Boris Pistorius said that the German government had not yet made a decision for or against—nor could he say when a decision will be reached. Now this defense minister had been the defense minister for exactly one day when he made this announcement—he had been appointed Thursday after his predecessor suddenly resigned. Why was Pistorius chosen? Well, he had opposed sanctions against Russia in 2018, and had been close to former German Chancellor Gerhard Schroeder who was friends with Putin. Probably more to the point, his associates described him as unusually independent, outspoken—and invulnerable to pressure.

Europe is indeed 100% onboard with the Ukraine adventure—if by “Europe” you mean the supranational imperial institutions of the European Union and NATO. But the populations are increasingly restive. The continent is being swept by strikes and demonstrations, as the EU boycott of Russian energy closes down industries and makes home heating less affordable this winter. Europe’s governments, even though stripped of their sovereignty, have wavered.

Nowhere is this truer than in Germany. Germany’s economy has depended on partnership with Russia for over a century, and the two twentieth-century wars which pitted them against each other, led to hecatombs of blood and death which will probably scar both nations forever. One member of the German Bundestag (parliament) noted recently, that the last time Germany sent tanks against Russia, the result was that Russian tanks came to the Bundestag—where two of them still remain today.

Not all german politicians have forgotten history. pic.twitter.com/BgaoTCma7g

Now most observers—whichever side they take, and whether they will admit it or not—privately agree that a major Russian offensive is imminent, which will forever bury the illusions about a Ukrainian victory. Indeed, this is behind the desperation to ship bigger and better weapons, as Col. Douglas Macgregor has noted: “Send everything now—before it’s too late!”

Will NATO survive that Russian offensive—and for how long? Will the Biden administration survive? Saner elements may have to restrain it from triggering World War III by sending US troops against Russia in a “coalition of the willing” with the Poles, as Gen. Petraeus threatened last year. What about the European Union? In any case, we doubt the World Economic Forum can survive. Last week’s meeting was likely its swan song.

As the Presidential candidate who said that this war could never have happened under his watch, who called for immediate negotiations to end it, and even offered to mediate such negotiations—President Trump’s superior morality and judgment will be vindicated. But don’t imagine that the collapse of these supranational institutions and utopian schemes amounts to an automatic victory for the MAGA movement—it doesn’t. It could mean chaos if our movement doesn’t seize the reins. But it will create an opportunity, the likes of which may never arise again.