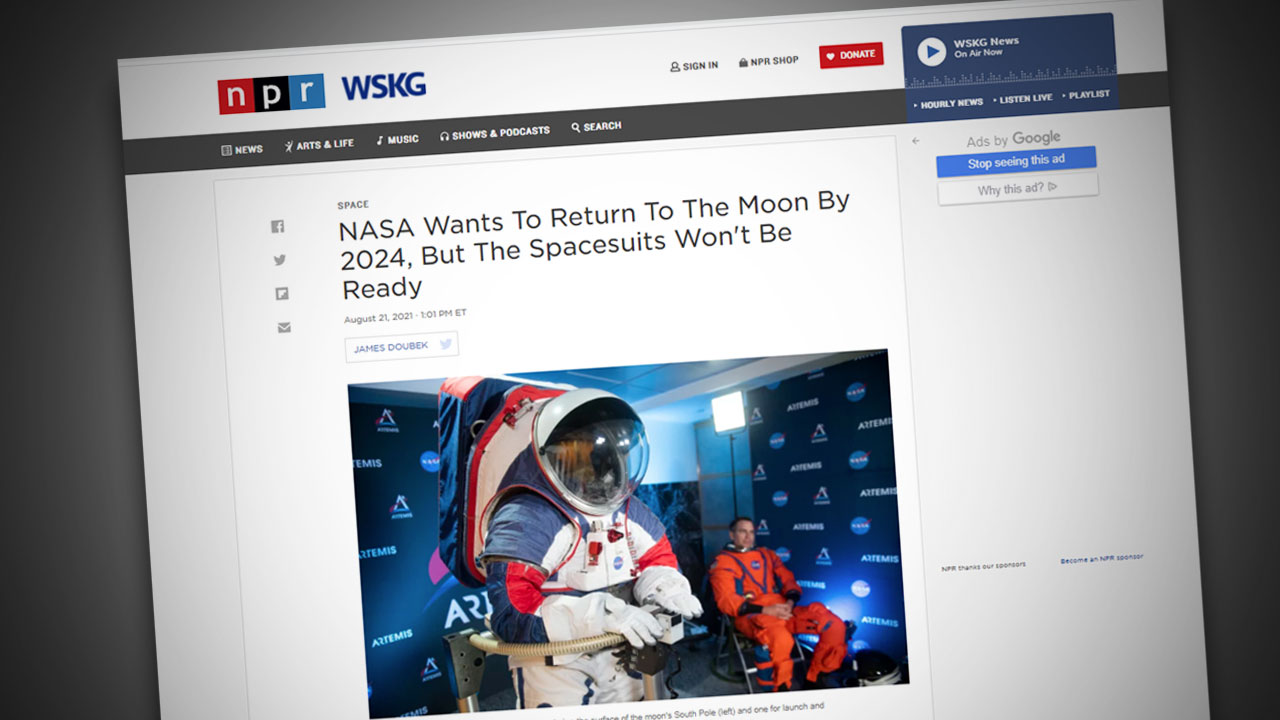 Let’s get this straight, NASA’s Office of Inspector General Office of Audits has determined that NASA will not be ready to meet the 2024 Artemis Moon Landing Mission target date due to delays in the development of... a spacesuit? Who the hell is buying that? According to the IG, these delays in perfecting Next Generation Spacesuits are a primary reason why NASA may not meet Artemis’s scheduled 2024 landing on the Moon, along with funding shortfalls, and a scheduling delay of approximately 20 months.

Now, there is also a delay until at least November 1st because one of the world’s most narcissistic billionaires, Amazon and Blue Origin’s Jeff Bezos sued NASA in the Court of Claims. At issue is NASA’s award of its human Moonlander contract to Space X, Elon Musk’s company, rather than Blue Origin, Bezos’ company. NASA had originally wanted to fund two Human Landing Systems, but Democrats in Congress did not provide the funding. Space X’s bid was the lowest and it plans to adapt vehicles it already has in the works. Blue Origin lost key technical staff following its failed bid.

Can you imagine what the outcome for the nation would have been, in the middle of the space race, after President John F. Kennedy announced his bold vision for America to “land a man on the Moon and return him safely to earth before the decade was out,” if we had been told that we would not meet that goal because of setbacks in producing a spacesuit or a dispute over the landing system due to funding? Now, NASA is just as much a hostage to the Biden Administration’s insane ideologies, as Americans or our allies stuck on the ground in Kabul.

In 2017, President Donald Trump outlined a new bold mission for NASA when he announced the return of the first woman and next man to the Moon by 2024 through the Artemis Program, the mission named for the twin sister of Apollo. The last time American astronauts were on the Moon was back in 1972. The plan this time was not to return to the Moon for a quick stop and return to earth. We are moving to develop a sustained presence on the Moon and to develop the resources of the Moon for long term exploration, and to use the Moon as a proving ground for future human missions to Mars. Like President Kennedy’s Moon challenge, Artemis represents a real mission which could unite this country, jumpstart our economy through new fundamental scientific discoveries and technological advances—in a word, ignite the talent, creative imagination, and thirst for discovery which once made America great.

President Trump brought NASA back from the scrapheap after the destructive policies against NASA under Barack Obama. At that time and continuing, based on his influence over the Biden Administration, Obama used NASA to pursue “evidence” to back up the utterly fabricated claim that we face imminent catastrophic climate disaster, requiring a societal reordering taking the economy back to feudal times, but in a way deemed “equitable” under Critical Race Theory’s edicts.

Manned space exploration and discovery were shelved. That's the primary reason why both Lyndon LaRouche and I devoted ourselves to a campaign for Obama’s impeachment. Now, rather than directly opposing the wildly popular Artemis program, the sabotage plan seems to be to slow roll it into oblivion. As opposed to President Trump’s mission-driven approach with fixed deadlines being actually met and exceeded, bureaucracy and waste will be allowed to corrode and ultimately completely undermine the mission. 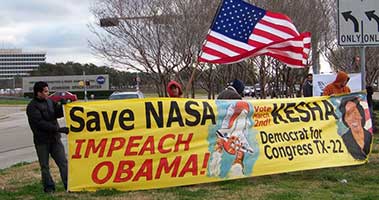 Kesha with campaign staff organizing ahead of the 2010 democratic primary in the 22nd district of Texas, here pictured outside the Johnson Space Center.

We are now told that it is basically impossible that the space suits will be ready for flight before April 2025 at the earliest. According to the IG’s report, “for the past 14 years, NASA has been developing next generation space suit technology, which 5 years ago led to the creation of the project known as the Exploration Extravehicular Mobility Unit (XEMU) that will be used to support astronauts' involvement in multiple programs.” Astronauts aboard the International Space Station, ISS have continued to use the space suits designed 45 years ago for the Space Shuttle program.

NASA started working with Hamilton Standard and ILC Dover back in 1974 for the EMU design. During the Apollo program NASA contracted hundreds of companies including International Latex Corporation ILC of Dover DE, which manufactured Playtex bras and girdles because of the engineers understanding of rubber garments. NASA has continued working with ILC Dover on spacesuit design. In 1990 ILC Dover produced the suit currently being used on the ISS for spacewalks.

Despite working on the development of its Next Generation space suit for well over a decade, according to the IG, and having spent nearly $200 million on Extravehicular Spacesuits developed over the 9 year period which ended in 2017, “the agency remained years away from a flight ready space suit.” Since 2017, NASA has also spent an additional $220 million for a total of $420 million on space suit development.

I won’t waste more of your time or mine with the phony bureaucratic nonsense they give as to why the suits will not be ready. According to the IG, by the time two flight-ready XEMUs are available, NASA will have spent over a billion dollars on the development and assembly of the next generation spacesuit.

In line with its devotion to fake ideologies about climate change and human identity, the Biden collective cut manned space exploration in its budget while prioritizing climate “science.” NASA’s employees have been subjected to the full load of destructive ideological programming, including critical race theory, racial equity, and gender fluidity. Maybe that is why they have a delay in the spacesuit designs: They have to fit the suits to changing identities and gender pronouns.

While SpaceX founder Elon Musk has offered to help with producing the next generation spacesuits, and Musk has demonstrated his competence by returning American astronauts to the ISS on American rockets, from American soil for the first time since 2011, NASA and the nation as a whole are facing much bigger problems.

What is missing is the dedication to a renewed national mission of scientific discovery, of conquering and changing “nature” for the better, as was intended under President Trump’s Artemis Program. Such a mission, as President Kennedy noted, mobilizes the best of all our nation’s skills and talents. During President Trump’s time in office we were already making tremendous gains in achieving the goals of the Artemis mission through much needed advancement in a pro-nuclear policy for powering ourselves on earth and eventually on missions to the Moon and Mars. This is the critical element in restoring the United States to a full set advanced manufacturing economy, and reviving America as an industrial and manufacturing superpower.

Lyndon LaRouche’s Moon-Mars Colonization program, like Alexander Hamilton’s Report on Manufactures, like Abraham Lincoln’s Civil War building of the transcontinental railroad, and Franklin Roosevelt’s war mobilization, teaches us that massive scientific and technological mobilizations, focused on discovery and invention, drive human development and are the keys to a new American renaissance. Those now slow rolling Artemis are the same budget cutters, radical environmentalists, and faceless bureaucrats who have annihilated the physical and productive economy of this country, destroying the nation’s fabric and substituting a post industrial, decadent cultural dystopia. It is imperative that Artemis stays on schedule and that those responsible for the delays be removed from any decision-making role in our government.