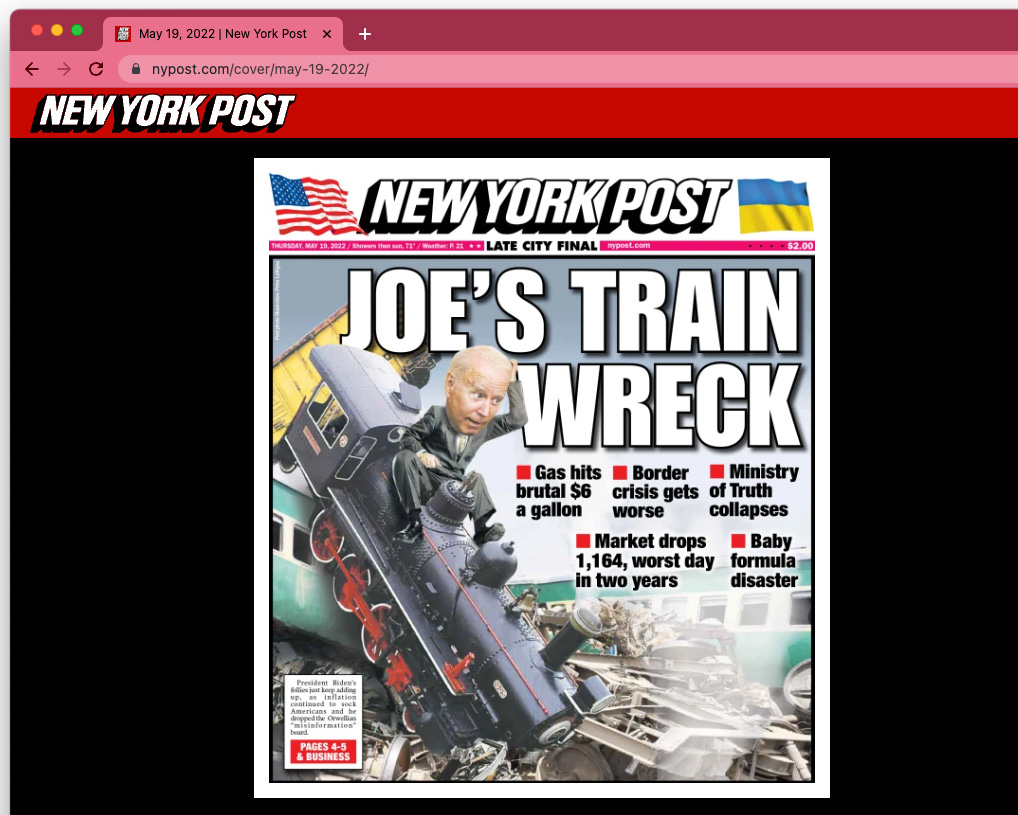 Tuesday’s elections showed that Donald Trump has more than a firm grip on the Republican Party; those out to destroy MAGA are failing.  The Pennsylvania and North Carolina results are obvious. But even in Idaho, where a Trump endorsee lost the governor’s race, the RINO contingent got wiped out in the state legislature, largely based on election integrity concerns and COVID restrictions.

The response has been a panicked attempt to double down on quashing dissent, with new and ever more fantasy-driven “rebrand the narrative” campaigns.  But the tag line “Ultra-Maga,” researched for six months by Anita Dunn and the Center for American Progress, and intended to be a killer piece of derogatory Biden political branding, has instead been embraced as a proud moniker by millions of Americans. Biden’s ‘ultra-MAGA’ attack is product of six-month study led by Anita Dunn – ConservativeNewsBriefing  The DHS Homeland Security Disinformation “Ministry of Truth” is paused after an enormous wave of protest throughout the county, as thousands reread George Orwell’s iconic “1984”  as an efficient summary of Washington’s present intent.

The “pausing” of the Ministry of Truth was immediately followed by a renewed attempt to sic the FBI on an illusory horde of “White Supremacists,” with a new and dangerous Domestic Terrorism bill which just passed the House.  The libelous “White Supremacist” label has replaced “the deplorables” in this Administration’s lexicon for the more than half of the American population who voted for Donald Trump.  According to the latest talking points, Trump voters all advocate the “Great Replacement Theory” in which diversifying demographic change is to be resisted with violence.   In reality, the Great Replacement is a corporativist policy long pushed by both parties, in order to procure cheap labor from immigrants under inhumane and desperate slave labor conditions, and has been a Democratic electoral strategy for years now.

All of this can and will spectacularly fail, so long as MAGA and its allies continue to wield their power to defeat them, using as a significant weapon, relentless ridicule. This is not really hard, since the actions of the White House and their Democratic Party are increasingly insane and ridiculous.  Recent polls demonstrate that Americans of every political stripe see this, particularly with respect to the economy.

Now, what we need is the economic perspective by which to rebuild the nation, tame inflation, and mitigate the recession looming immediately ahead.  We are campaigning to eliminate the Federal Reserve, which has played a large and criminal role, along with Biden’s globalist energy and war policies, in creating the current economic crisis.  Following the collapse of the post 1971 post-industrial system in 2008-2009, the Fed and its allies on Wall Street and the City of London have acted to create a new and even larger financial bubble –probably the largest financial bubble in the history of the world.  The frantic attempt to save that bubble in a “soft landing” for those invested in it, is the central driving force for the present inflation/stagflation crisis.

The way out is in a new National Bank, modeled on Hamilton’s National Bank, directing credit to rebuilding the physical economy of the United States and nothing else, and making us economically self-sufficient again.  There is no other way out, other than building our way out.

Right now, MAGA and its many allies of every political persuasion who understand our actual peril, should be demanding that Congress move to immediately reopen fossil fuel production--namely oil, clean coal, and natural gas.  Reopen the Keystone Pipeline and reopen the leases for new drilling.  Start building new and necessary refineries. (We haven’t built a new one since the 1970s).  Start financing nuclear power development in a major and massive way, while figuring out how to rapidly build a modern electrical grid.  While the entire Republican Party and some Democrats are on record favoring this, the war for it cannot wait until the November elections.  It is not an election demand to be ballyhooed about until November--it is a survival demand right now.

The MAGA movement and its allies should be unleashed on the Congress, and on every candidate for the House or the Senate, to demand this shift in energy policy now.  As of November, we are aiming to have built a veto-proof majority in Congress for this policy and similar dirigist American System economic recovery measures.  Otherwise, there is no protection against the poison which is the Washington swamp.  This shift, and a declared national intent for energy independence and self-sufficiency based on transitioning from full utilization of fossil fuels to a modern nuclear-powered economy--coupled with outright rejection of the climate catastrophe myth--will, itself, have a major impact on current inflationary trends.  It is the climate religion’s war against advanced fuels which is itself blocking new building and investment, and fueling the present rampaging inflation.

The British War in Ukraine

As noted above, public uproar has stopped, temporarily, Biden’s Truth Ministry, and Nina Jankowicz , its proposed minister--late of the Ukrainian secret service and British Intelligence’s Integrity Initiative--has also resigned.  Meanwhile, the $40 billion expenditure of U.S. funds to fund the war against Russia down to the last Ukrainian, passed out of the Senate, and was just signed into law by Biden.  Rather than seeking peace, Washington has signed on to Britain’s long war against Russia and its regime change operations there, risking nuclear obliteration here. As President Trump has implied, they are clearly committed to having everyone dead, rather than ending the war.

There have been significant exposures in the last weeks of how the British Empire does these things, entrapping our dumb and corrupt Washington clueless in the process.  This is a longstanding problem.  Did you know, for example, that we were similarly suckered into the Viet Nam War?  We will be writing about this in some depth over the weekend.  Meanwhile, Russia is biding its time and achieving its objectives in Ukraine, while on the larger strategic front, the U.S. and Europe are collapsing economically thanks to their adherence to the myth of climate change and the need to eliminate oil and natural gas.