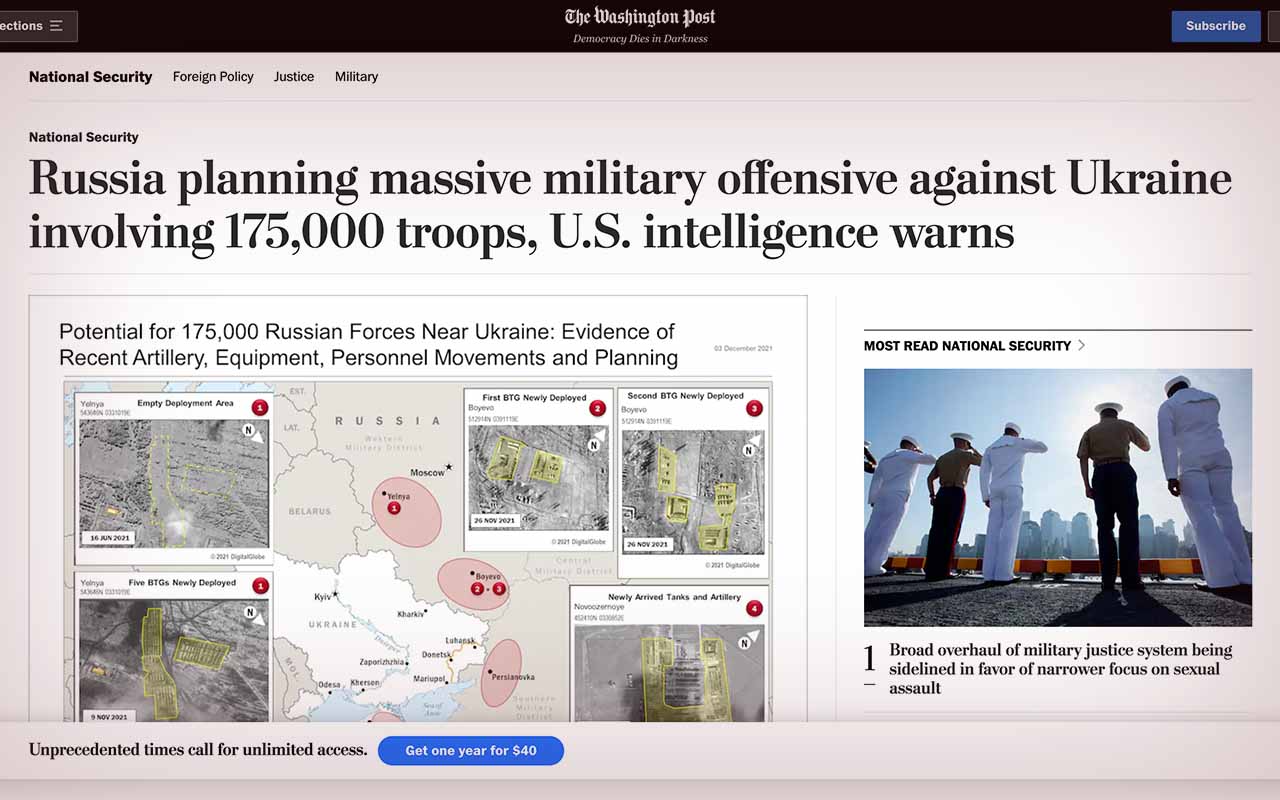 War Clouds Over Ukraine? They’re All British and U.S. Created, Not Russian

On Friday night, December 3, the Washington Post https://www.washingtonpost.com/national-security/russia-ukraine-invasion/2021/12/03/98a3760e-546b-11ec-8769-2f4ecdf7a2ad_story.html dropped what it claims is U.S. intelligence documentation of a Russian plan to invade Ukraine, using 175,000 troops. This comes ahead of Joe Biden’s call with Russian President Vladimir Putin concerning Ukraine and other issues, now scheduled for Tuesday. Obviously, aware of the propaganda U.S. intelligence (or, potentially, Biden’s lame National Security Council) was about to send to its scribes at the Post, Macho Mussolini Joe darkly promised his teleprompter Friday afternoon that he is putting together “what I believe to be, will be the most comprehensive and meaningful set of initiatives to make it very, very difficult for Mr. Putin to go ahead and do what people are worried he may do.”

Before going further, let us again state one thing clearly. The latest insanity from the people running Mussolini Joe is all about snookering the American people, once again, to support America’s post-war role as world gendarme for a satanic financial oligarchy bent on destroying this country. No Republican or Democrat advocating “iron clad” guarantees to Ukraine (a government that Biden and the Obama administration populated with actual Nazis) deserves support. Those such as U.S. Rep. Michael Waltz (R-FL), now yammering on Fox News about Biden’s weakness on Ukraine and Taiwan while advocating military adventures there, while also claiming to support Donald Trump, are exactly the snakes I’m talking about. They include most of the Republican Senate (with the exception of Rand Paul) and many in the House, and most of the “generals” given airtime by Fox. It’s not just the Nazis in Ukraine itself. There is an entire lobby in this country of Banderite Nazi cultists, assembled in the Ukrainian Congress Committee of America, which has repeatedly demonstrated its hold on Mussolini Joe Biden. Donald Trump distinguished himself by campaigning against the endless wars spawned from the U.S./UK “special relationship.” True 2022 Republican candidates and President Trump’s 2024 candidacy must be dedicated to John F. Kennedy’s dream, spoken in the wake of the Bay of Pigs, of smashing the CIA and similar Deep State agencies and “scattering them to the wind.”

The blogger Moon of Alabama https://www.moonofalabama.org/2021/12/us-intelligence-has-found-easy-to-disprove-claims-of-a-russian-attack-on-ukraine.html is correct when it says the Washington Post’s intel drop is “bullshit” and “cheap propaganda,” meant to prepare the U.S. domestic audience for what the British and the Tories who occupy the American National Security State may ultimately have in mind. As he notes, U.S. intelligence, via the Washington Post, says Russia has 100 tactical battalions preparing for this alleged adventure. But Russia has only 136 of these total. So, the claim here is that Russia would throw three-quarters of its tactical battalions to the Ukraine front, leaving vast segments of a country spanning 11 time zones unprotected. Hardly Russian military strategy.

Colonel Doug McGregor, who served President Trump ably, has issued two pieces in the past year about this. One of them paints a war over Ukraine as a war in which the United States would lose without resort to nuclear weapons—in which case all of us are toast. https://www.theamericanconservative.com/articles/facing-the-facts-of-war-with-russia/ The second, more recent piece, written on November 30, is an attempt to impose sanity on those who are running Biden by resort to the history of World War II. https://www.theamericanconservative.com/articles/remember-pearl-harbor-mr-president/  In both, he clearly points out that Russia is not seeking war. Putin has been very, very clear about all of this. He wants guarantees that the failing vassal state on his border, with defense forces composed of regenerate Nazis, will not become part of NATO. Rather, the danger of war lies in the fevered brains of our elites and the simple fact that the American population continues to tolerate them. President Trump, however, does not. He summarized the case succinctly in an address to a Turning Point convention at Mar-a-Lago on December 4, characterizing Joint Chiefs Chair Gen. Mark Milley as “a f***ing idiot.”

On November 24, South Africa reported to the World Health Organization (WHO) and related medical authorities that a new variant of the COVID-19 virus was circulating there. They reported that the variant was highly infectious but mild in its effects. That remains the status at this point despite the hype.

But the media, the WHO, and the entire discredited public health regimes internationally immediately went into their now practiced SPREAD PANIC overdrive mode. Federal Reserve Board Chair Jerome Powell immediately prognosticated a potential grave risk to the economy, putting it right alongside the message that the Fed might end its bond buying and flooding of money into the economy sooner—which, along with Biden’s effort to outlaw fossil fuels and implement his Build Back Better agenda, represents the actual grave risk to the economy. Moderna and Regeneron announced that vaccines and monoclonal antibodies “would struggle” against the new variant, before any studies to ascertain whether this was the case. New York State immediately went into a state of emergency, allowing the new wacko Governor Kathy Hochul to limit “non-essential medical surgeries” and procedures in the state’s hospitals. In hotspots now in the Upper Midwest, the Delta variant is peaking. But the strain is not from COVID. It is from the deadly impacts of the last round of lockdowns which destroyed much of the preventive and screening mechanisms in place for heart disease, cancer, and other diseases. As one friend, an ER nurse, told this writer, the people who are coming to emergency rooms are much, much sicker than before COVID.

The Biden Administration, along with most developed countries, imposed travel bans on eight African nations, even though the new variant had only been found in two, South Africa and Botswana, and as is now clear, the variant was already circulating in Europe before South Africa’s report. So much for the Biden collective’s alleged devotion to the Global South. Meanwhile, the southern border of the United States remains completely open, with thousands crossing every week into a haphazard COVID testing regime.

Europe has again resorted to lockdown measures with Germany announcing a lockdown of the unvaccinated and legislation to mandate vaccination. Angela Merkel promises this will be passed by February. Austria has imposed a lockdown targeting the unvaccinated. Jim Cramer, Wall Street’s PR man at CNBC, began screaming last week that the military should be used to impose vaccination. This has been accompanied by widespread calls to deny the unvaccinated medical care.

The definition of insanity is to do the same thing over and over again while expecting different results, a true statement misattributed to Albert Einstein. The same can be said of those who ignore the obvious precedents in history, particularly the history associated with coercive medical care in Nazi Germany. Lockdowns and mandates have nothing to do with taming COVID-19 and everything to do with conditioning the population to accept the regimes necessary to implement the Green New Deal and other population control and austerity regimes. The current mandates violate the Nuremberg Code, enacted after the coerced experiments of the Nazis came to light. The Nuremberg Code enshrined the universal principle of informed consent for medical treatment. While there is resistance throughout Europe (Austria saw 40,000 people take to the streets over the weekend and similar demonstrations occurred in Brussels, in the Netherlands and in several German cities) the primary battle is taking place in the United States. Three federal courts have now imposed injunctions on the Biden vaccine mandates issued through OSHA and there are reports that anticipated worker shortages are causing many companies not to enforce the Biden mandate. Thirteen states currently have executive orders or some form of legislation banning enforcement of the federal mandate or the refusal to acknowledge medical or religious exemptions, and this movement is growing. https://www.nashp.org/state-lawmakers-submit-bills-to-ban-employer-vaccine-mandates/

Anthony Fauci, Director of the National Institute of Allergy and Infectious Diseases (NIAID), is not “science” personified as he claims, or “President” as the addled Joe Biden said last week. He is a partisan bureaucrat pushing a destructive agenda while massively conflicted because of his role in “gain of function” research. Journalist Glenn Greenwald issued an extremely disturbing piece on December 5th which appears to document a wholesale reversal of positions on COVID origins by prominent scientists who were showered with millions in NIH grants. https://greenwald.substack.com/p/to-deny-the-lab-leak-covid-theory Greenwald’s understated piece is worthy of full Congressional investigation.

If the U.S. population is to have any faith in doctors or the medical establishment ever again, real American science must now be mobilized to invent new, safe vaccines and to bring to bear the therapeutics now under study or used throughout the world which will make the symptoms of COVID similar to those of the common cold that it is for most people. But this time, all the science and all the risks must be plainly laid out for people and the liability shield which protects Big Pharma must be revisited. Further, the shifts of wealth which have occurred during the pandemic—devastating the poor and working classes while further enriching the world’s oligarchs and their globalist multinationals—must be documented and published widely, along with the deep and urgent studies of the collateral damage done in the form of induced psychological crises, opioid deaths, and lost years of learning among the nation’s youth. This is what should be addressed and remedied as a national priority.