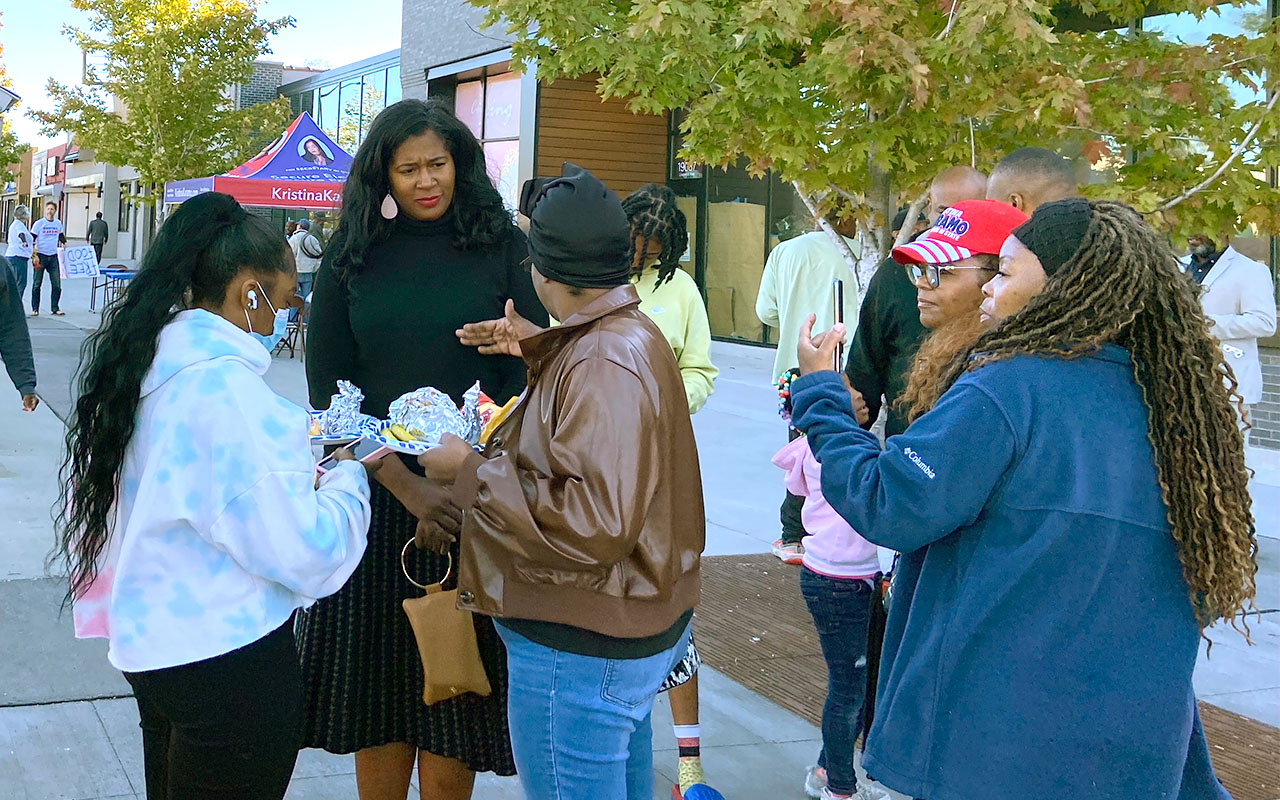 “These people are not liberals, they are authoritarians.”

“What Tim Ryan said about killing the MAGA movement, these people hate our guts. They are terrified of this political movement which will unite Americans across all different demographics and take back our country … and there is nothing they can do to stop this MAGA movement.”

Those were the words of Kristina Karamo, the black woman and Republican candidate for Michigan Secretary of State, who embodies the transformation taking place in the Michigan Republican Party. Karamo spoke at Donald Trump’s Save America rally in Warren, Michigan on October 1.

We were there, with a LaRouchePAC table featuring our still-most-popular sign, “Mussolini Joe Has to Go.” Our team circulated amongst the thousands lined up for the rally and distributed leaflets which addressed Donald Trump’s offer to mediate the Ukraine conflict, the economic crisis, and the need to restore our economic sovereignty by abolishing the Federal Reserve.

We’ve been to dozens and dozens of Trump rallies over the years, and, what stood out about this one, was the intensity and commitment of the attendees. As “Trump rally veteran” Ron Kokinda commented, “This was a political cadre,” numbering in the thousands. Whether they were candidates, precinct delegates, poll workers, or citizen activists, these were organizers, and this is why, as Karamo said, “ they are terrified of this political movement … there is nothing they can do to stop this MAGA movement.”

As the commitment of this movement intensifies, so does the potential to turn the Republican Party into something completely different than what it was prior to Donald Trump. That old Republican Party was merely a branch of the imperial “Uniparty,” devoted to Wall Street and war. With Trump’s 2016 victory, which margin of victory came from independent and blue collar workers—especially in the Midwest—something else began to emerge.

Karamo and others are organizing to take it further. At the rally on Saturday, she repeated her challenge “to push into blue areas.” And she is. In the many months she has been campaigning, she has been going into Democratic areas, with the same message she takes everywhere, and finding resonance. Last weekend, her campaign organized three street-corner events in Detroit, one in southwest Detroit which is heavily Hispanic, and two in black neighborhoods. At one of those two events, she was joined by Congressional candidate Martell Bivings, who, like Karamo, is a black Republican, and who decided to run when he discovered how much potential support there was in Detroit. In the face of the economic crisis and insane education/indoctrination policies, traditional party affiliations are beginning to crumble.

The old Republican Party almost ritually wrote off Detroit and the surrounding areas in Wayne County. But grassroots Trump candidates and activists are changing that. For many election cycles, most Democratic Wayne County Commissioners were unchallenged in their races. This year, there are Republicans running in 10 of 15 of those districts. One of them, Ann Clark, is campaigning in Dearborn, which has large Muslim, Chaldean, and other Mideastern communities, which have been staunchly Democratic for decades. Clark, and her volunteers from the community itself, are finding that, especially on questions of culture and education, many residents are discovering themselves to be aligned with today’s Republican Party, not the “drag queen in every school” Democratic Party.

As we have been campaigning in Wayne County for candidates like Karamo, Bivings, and Clark, my husband and I have been circulating our own statement, which seeks to make the nature of this historic shift conscious for voters:

"…The 2022 midterm elections give us the opportunity to further build the movement that will effect a 180-degree turnaround for our nation and our economy. This is possible, because we are in the middle of a transformation of the Republican Party back into the Party of Abraham Lincoln—a party of workers, producers, entrepreneurs, builders, and visionaries. That transformation is being driven by an ever-growing grassroots movement which is intent on turning the Republican branch of the “Uniparty” into a vehicle which, with the leadership of Donald Trump, can create an economy that will give us a future…

"Not every Republican candidate understands or is committed to this. But we believe that if we, the citizens, mobilize, we can lead the Republican Party into this transformation.… By asking you to vote Republican this election, we are asking you to, in truth, vote for the Republic and to join us in fighting for the policies and the quality of leadership which can secure it."

Delegates met at the rally and others around the state are using the statement in their organizing. The full statement is available here.