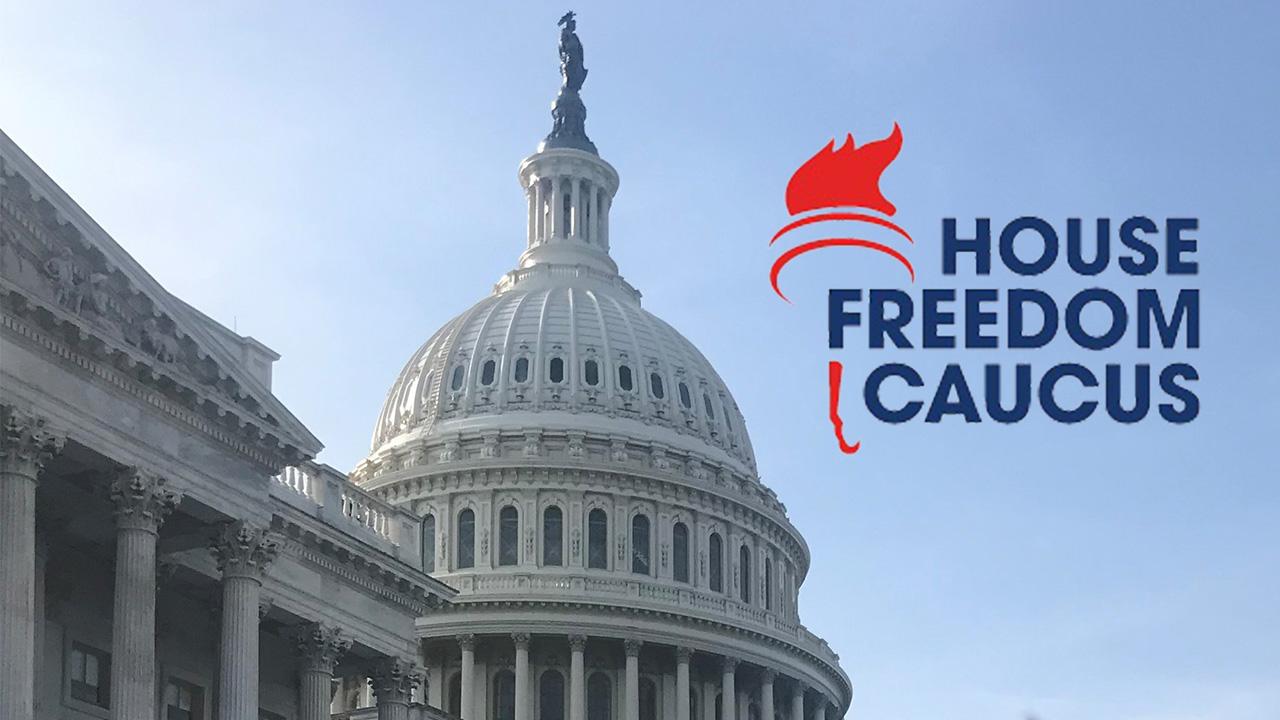 On February 24, 2022, the world changed.  When Russian troops advanced north from Crimea and west from the Donbas, an entire era of history ended.  Regardless of the ultimate outcome of the Ukraine War, there is no going back to the strategic axioms of the pre-war world.

We begin with a little history.  On December 26, 1991, the Soviet Union was abolished.  What should have happened, at that time, was an end to the “cold war,” the abolition of NATO, and the creation of an economic partnership between the United States and the newly democratic Russian Republic.  Instead, for 31 years, we have witnessed the opposite:  NATO expansion, the military encirclement of Russia, unprecedented peacetime economic sanctions, and growing agitation for “regime change” in Moscow.  On February 24, 2022, Russian President Vladimir Putin said, “Enough is enough!” and launched the Russian Special Military Operation.

But what does all of this have to do with the Freedom Caucus and U.S. economic policy?

First and foremost, it means that the romantic nostalgia which clouds the minds of far too many “conservatives” must be jettisoned.  Going back to the warm and cozy days of Ronald Reagan is not an option for us today.  One should not aspire to be the proverbial aging General who is always fighting the last war.

After the fall of the Soviet Union, the trans-Atlantic financial and corporate elites—with Russia prostrated during the Yeltsin years—set about to remake the world.  They created a new financial/corporate world-wide empire.  A globalist Colossus.  Very foolish leftists identify this as the American Empire, but what has transpired over the last three decades was certainly never in the interest of the American people.  In reality, the international financial/corporate oligarchy who created this empire operate with no allegiance to any sovereign nation, whatsoever.

Within ten years of the fall of the Berlin Wall, the entirety of the banking, financial, trade and monetary axioms of the American economy were ripped out and replaced by a monstrosity of financial speculation, free trade, and monopoly.  Much of this began under George H.W. Bush and Bill Clinton, including the repeal of Glass-Steagall, the enactment of the Commodity Futures Modernization Act (which legalized Over the Counter (OTC) derivatives trading), and the passage of the North American Free Trade Agreement (NAFTA).  Beginning, in the 1990s, at the behest of globalist financiers and corporations, the U.S. productive economy was further dismantled, the banking system was transformed into a vehicle for financial gambling, and the productive workforce (the American People) were ground down, step-by-step-by-step.

The real horror began following the financial meltdown of 2007-2008.  Both George W. Bush and Barack Obama signed off on the massive bailouts of the “too big to fail” financial institutions.  Then, beginning in 2008 and continuing to today, the Federal Reserve entirely abandoned its regulatory responsibility to oversee and manage a stable banking and monetary system and, instead, became the prime engine of financial speculation and looting.  The Fed became the chief criminal among a sea of criminals, and under their supervision a vast revolution was affected in U.S. banking and in all of the financial markets.

None of these developments, however, were simply the result of internal U.S. economic policy decisions.  What has emerged since 2008 is a world-wide global financial Leviathan, with a ravenous appetite for short-term financial profits and increasing dictatorial control over sovereign governments.  During the last 15 years, a financial and economic imperialism has been imposed on the United States from financial interests intent on destroying both the sovereignty and economy of the nation.  Only Donald Trump demonstrated any courage in opposing this.  In Congress—on the right as well as the left—no one has stepped forward to challenge this trajectory.

The British oligarchy has been obsessed with destroying the economic and philosophical underpinnings of the American Republic for more than two centuries.  Today’s oligarchical financial and corporate empire, which now transcends the mere City of London, have kept to that obsession, and they are now acting on it.  The intention is to destroy the United States and to make it subservient—as they tried to make Yeltsin’s Russia subservient—to the financial oligarchy.

This is the context—the dynamic—within which to comprehend what the War in Ukraine is really all about.  Putin has simply uttered “Nyet” to the demand of the financial empire that Russia submit to the diktats of the trans-Atlantic elite.  Instead, Russia is now pursuing foreign trade and production alliances with a multitude of nations, involving trade in energy supplies, food, manufactured goods, and other components of a productive physical economy.  Russia’s recent trade deals with India are paradigmatic of this approach.  An entirely new—revolutionary—approach to both foreign relations and economic policy has now been put on the table.  This is not a threat to America.  It is an opportunity.

Time for American Patriots to Wake Up

Although none of these changes began with Biden, consider what has been done in the two short years of his Presidency:   a violent assault on America’s energy sector;  an open border that has resulted in millions of illegal immigrants entering the country;  mass drug addiction, as Fentanyl and other deadly drugs flow freely into the country and Biden supporters lobby to legalize drug usage throughout the nation; the loss of literally millions of small businesses resulting from the Covid lock-downs, accompanied by the personal bankruptcies of millions of restaurant and other small business owners;  the escalating destruction of our cities, with now almost-universal homelessness and violent crime.

This is all unprecedented.  It has happened so fast, it is almost too much to grasp, to deal with.  It is overwhelming.

So, what do the Ronald Reagan-loving members of the Freedom Caucus propose as solutions to this deadly crisis?  Essentially, what is being put forward is a horribly disfigured version of Newt Gingrich’s 1994 “Contract with America”!  Often heard proposals include:  tax cuts; cuts to entitlements (Social Security and Medicare), or their elimination entirely; a Balanced Budget Amendment; and similar “fiscally conservative” measures.

Are they completely nuts?  Or only as insane as Paul Ryan?

America—and the American People—are dying before our eyes.  The productive American economy has been largely dismantled and the American people impoverished at the behest of globalist financial and corporate elites.  Now, some Republicans are proposing to cut or eliminate Social Security?!?  Besides the obvious political fact that this is the most certain way to ensure that the Republican Party never wins another national election, consider the unbelievable irony:  as globalist oligarchs demand a lethal assault on vulnerable American citizens, some Republicans—rather than fight against these schemes as one would fight an invading army—propose to aid in the destruction of elderly and poor Americans!

Stupidity may be rampant, even contagious, but it is no excuse.  The level of moral indifference is shameless.

Some of the “think tanks” and Foundations who advise the Freedom Caucus keep repeating the old tired mantra:  “the free market; the free market; the free market.”  But, to remind you again, this is not 1994.  Open your eyes.  Who actually runs the “free market” in 2023?  The Federal Reserve?  The globalists at the World Economic Forum?  The corporate elite who stripped America of its manufacturing by shipping it all overseas?  The Zombie corporations who exist only as a vehicle for gambling profits?  The U.S. Chamber of Commerce who welcome millions of illegal immigrants because it means cheap labor?

We must begin with recognizing the elephant in the room.  The Federal Reserve is dictatorially imposing a top-down financial/monetary regime which favors and rewards the most extreme forms of non-productive speculative wealth generation.  It has become a Central Bank for speculators, as witnessed in its ballooning balance sheet.  It is time to put an end to this destructive travesty.  No economic recovery is possible unless we first shoot the elephant.

Second, energy, water, transportation, and other major components of the physical economy are in desperate circumstances.  These are resources that sustain human life.  Take the money we gave away free to Ukraine, demand a refund, and put it into these cash-starved areas.  Then put more money in through public-private partnerships.

Third, America needs a Nuclear Renaissance together with a colony on the Moon.  Fission, Fusion, Project Artemis:—this is not “discretionary” spending.  It is the future.

Fourth, the “Forgotten Men and Women of America,”—whether in the cities or out in the countryside.  Young and Old.  They are your responsibility.  If you will not act on their behalf, you should resign your office.

The trans-Atlantic financial empire is dying.  We should not mourn its death.  Forget geopolitical “strategic partners,” like NATO or the “special relationship” with Britain.  These too are components of a world fast disappearing.  Think of the future.  Think of potential trading partners:—partners in grand projects (water, energy, and communications), manufacturing, technology and the space program.  We must stop operating under manipulated crisis management conditions.  We require stability—in trade, in banking, in productive investment.  And we need partners with whom we can strike deals that benefit both sides.

Only sovereign economic action will get us out of this mess.   Stop playing in the sandbox of the 1990s and think about what your Oath to the U.S. Constitution actually demands of you.