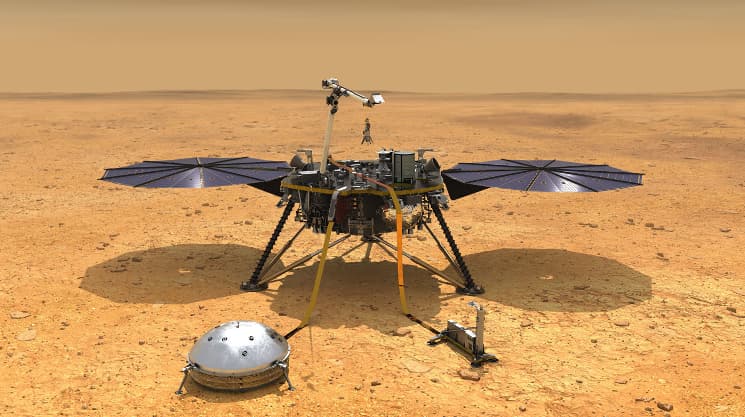 If sky high inflation on Earth has you looking to the stars for inspiration, you’ll be happy to know there is still good news in our solar system. While Biden’s economy may not hold water, the planet Mars does, just beneath its surface!

Nearly four years after landing on Mars in 2018, the Mars Insight lander recorded a magnitude 4 Marsquake on Christmas Eve of 2021.  The Mars Insight lander has a seismometer, SEIS, the Seismic Experiment for Interior Structure. It is a dome-shaped instrument that rests on the Martian surface and records Martian seismic vibrations. As Mars is one of the four rocky planets of the solar system (along with Earth, Venus, and Mercury), subject to interior quakes, SEIS adds another reference to our Earth-based observations.

Comparison of Mars and Earth has shown Mars to be about half the size of Earth. On Earth the lithosphere is thin and broken up into plates whose movements are responsible for earthquakes. Mars has a thicker lithosphere without plate tectonics. As a one-plate planet, Marsquakes are not as powerful or frequent as Earthquakes. So, the SEIS seismometer is very sensitive and capable of measuring motion down to the scale of a hydrogen atom.

On February 11th, two months after the shock measured by InSight, scientists learned that the cause of the Christmas Eve motion was not a Marsquake, but the massive impact of a meteor.

The resulting crater was detected by cameras aboard the Mars Reconnaissance Orbiter (MRO). The crater is the largest new impact crater detected in the 16 years that MRO has been flying around Mars. The High Resolution Imaging Science Experiment (HiRISE) camera on MRO was able to match the large seismic event detected by the Mars Insight Lander to the recent impact crater observed in the Amazonis Planitia Region of Mars, which measures 150 meters across and 21 meters deep. The meteor that hit Mars dug a crater that was almost 10 times larger than any new crater so far detected by MRO. What's more fascinating, is that the scientists working with the InSight and MRO missions made a great new discovery: water ice was exposed at the impact site. The cameras on the Mars Reconnaissance Orbiter spotted large chunks of ice  inside and surrounding the impact crater, dug out in the area around Mars’ Amazonis Planitia. The new crater is reported to be in one of the warmest spots on Mars; this is the closest to the equator that we have ever seen water ice. 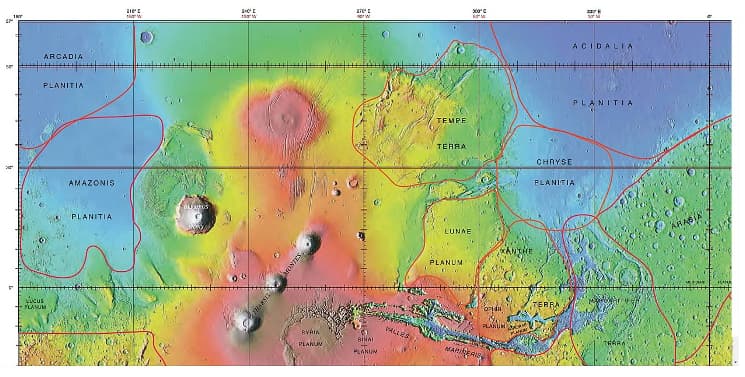 In the 16 years that the Mars Reconnaissance Orbiter has been orbiting the planet, 1,200 new impacts have been found. None of these prior impacts have measured up to the size or magnitude of the one felt by InSight. Scientists reported the distance between the 150 Meter wide impact crater detected by the MRO and the InSight Lander to be around 3,500 kilometers.

Unfortunately, following the announcement of the discoveries made by the InSight Lander and the Mars Reconnaissance Orbiter, it was revealed that due to a massive dust storm on Mars that has spread throughout Mars’ atmosphere, the solar powered InSight lander will soon be seeing its final days. A gradual accumulation of Martian dust on the lander’s solar panels has reduced its ability to generate power, and so it will soon be unable to continue seismology work gathering data about Mars’ interior, gathering data about Mars’ liquid core, and mostly extinct magnetic field. For this obvious reason, future land missions to Mars require nuclear power on all rovers, not solar panels.

The recent discovery of water ice on Mars will be a very important resource for future astronauts and colonists living and working on the Martian surface. Carrying water from Earth would be extremely costly due to its high mass per volume. In a report written during the Trump administration as part of the Artemis program, “ A New Era for Deep Space Exploration and Development,” it is asserted that, “Our immediate purpose should be two-fold: to develop the critical technologies and capabilities that will enable human missions to Mars, and to create the strategic national capability to operate on another planetary surface, starting with the Moon.”

To succeed in that mission, it will be critically important to overcome limitations such as the one being demonstrated by the ending of the InSight mission because of the inadequacies of solar power. We need advanced space power and propulsion systems. Under President Trump’s Space Policy Directive 6, a road map was laid out for the development of space nuclear power and propulsion (SNPP) systems. SP6 highlighted four major areas to be developed: nuclear fuels, fission reactors for surface power, nuclear thermal propulsion technology, and radioisotope power systems for space exploration.

As Lyndon LaRouche understood and developed in his 40 year Mars colonization program, such a mission, along with yet unknown future discoveries deriving from the exploration of space, will surely improve the standard of living of people here on Earth as well as allow for living and working on the Moon and Mars. Returning to Trump’s SP6, in light of the reality that water ice is basically everywhere on Mars, provides a direction and policy pathway to realize that goal. That’s a mission that holds water.