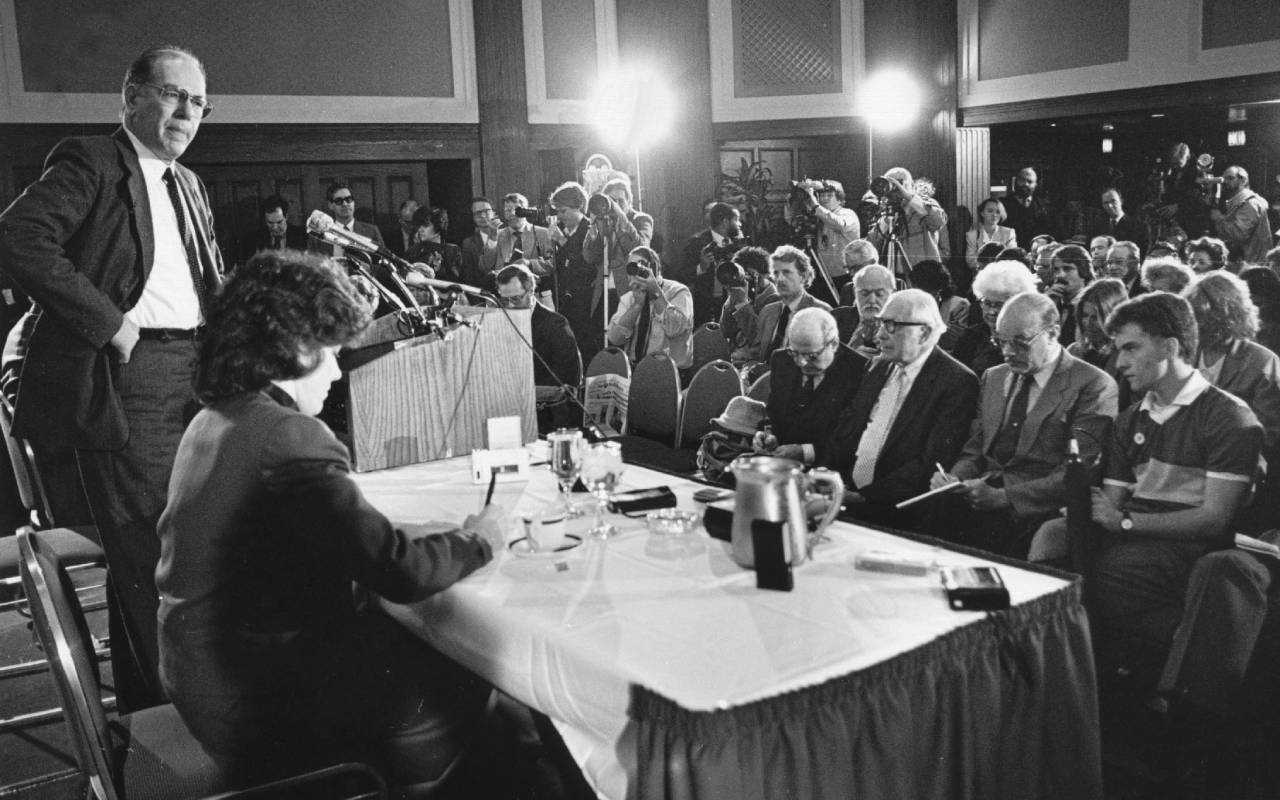 In 1989, Lyndon LaRouche campaigned for Congress from prison.  He had been put there by George H.W. Bush on behalf of the British oligarchy who demanded LaRouche's head. He wrote a pamphlet for his campaign entitled the Great Crisis of 1989-1992. In it, he explained his devotion to the American Revolution and its roots in the great golden European Renaissance. We found this excerpt from that pamphlet particularly resonant with the crisis this nation faces today and commend it to you.

People whose ideas of history are borrowed from Hollywood's trash TV and theater entertainments, think revolutions can be explained more or less adequately as upsurges of excessive romantic passions provoked by prolonged misery and oppression. In fact, history is filled by examples of prolonged, even fanatical popular democratic support for the most hideously cruel tyrannies.

Every true revolutionary upsurge in history, is distinguished by two general preconditions:

1) It must become widely sensed that the existing regime has lost "the mandate of Heaven." Visibly, the signs are that God has turned his face against that regime.

2) The new government, implicit in the revolutionary movement, must be seen as qualified to receive "the mandate of Heaven."

On the first of the two counts, the following.

As long as a government, the existing composition of a state, represents a society which has a sense of national purpose in the world outside itself and is dealing successfully with nature, that government, no matter how cruelly oppressive on other counts, appears to enjoy "the mandate of Heaven," God's implicit toleration, for a time, of its right to govern.

"Success" in this sense means "successful survival" as I define that in a recent scientific paper, In Defense of Common Sense, copies of which citizens may secure on request. In "shorthand," this means that the regime's policies appear to ensure the nation's successfully continued existence, and supply some widely believed sense of a national purpose for the existence of that state in the world at large.

To illustrate that point in the most relevant way, look at the development of pre-revolutionary conditions inside these United States.

Since our national beginnings in such places as the Massachusetts Bay Colony's mid-seventeenth-century development, until the close of the 1960s, "being an American” signified an exuberant commitment to fostering and enjoying the benefits of scientific and technological progress. Today, one dispatch in the New York Times reports, as many as 80 percent of our citizens are tolerant of the irrationalist, anti-science fictions of malthusian "environmentalism."

Obviously, although "80 percent" may be an exaggeration, over the past twenty-odd years the trend of change in popular opinion and governmental policy-shaping has been in that direction. In brief, during the recent twenty years, there has been a revolutionary change in our nation's prevailing values, opinions, and morals.

This transformation in morals has been called, more openly, the "radical (rock-drug-sex) counterculture"; among relevant insiders, it is also called "a cultural-paradigm shift."It is, in effect, a counterrevolution against the American Revolution of 1763-1789. It is also, in effect, an assault upon the essential values of our Western European civilization as a whole. It is an assault upon the classical, Ionian-Athenian Greek civilization of Homer, Aeschylos, Socrates, and Plato. It is an attack upon the First Chapter of the Book of Genesis. It is an assault upon the heritage of St. Augustine and the fifteenth-century rebirth of European culture, the Golden Renaissance.

The obvious question is whether the counterrevolution is fated to triumph over the betrayed American heritage. If not, then it must be the case, that sooner or later, the presently prevailing values in Washington, D.C., the counterrevolutionary values, will be cast out by a return to the premises of our republic's founding. ...

The essence of the matter, from the practical standpoint, is that our nation, even our civilization, could not survive under a continuation of the malthusian commitment to a "post-industrial utopia," the which has prevailed as a rising trend in policy-shaping over the course of the recent twenty-odd years.

Scientifically, this was as true in principle twenty-odd years ago, as today. The difference is, that today, twenty-odd years later, we have come to the edge of the precipice toward which we have been traveling the intervening time. Twenty years ago, I-like all among those of us who were capable of seeing beyond the end of our noses, recognized, and warned that the continued toleration of the cult-dogmas of the "post-industrial" utopians, if continued long enough, meant the death of civilization within a generation or so. ...

That typifies the case in which a powerful regime appears suddenly to lose the "mandate of Heaven."

Sometimes, the best new revolution is the rebirth of an old one.

This view of the eighteenth century's worldwide American Revolution is an accurate, and adequate one, on the condition that we locate the proximate roots of that revolutionary nationalist movement of the late eighteenth and early nineteenth centuries in the Golden Renaissance of the fifteenth century, with emphasis upon the A.D. 1439 Council of Florence.

So, through the figure of Benjamin Franklin - "Papist" Franklin - it entered a predominantly Protestant America, a Catholic Italy, France, Spain, Ireland, and Ibero-America, with Gottfried Leibniz's Germany, and joined to the American cause such successors of Johann Sebastian Bach as Wolfgang Mozart and Ludwig van Beethoven, as well as the poet, dramatist, and historian Friedrich Schiller. When we view the American Revolution rightly, as a fruit of the A.D. 1439 Council of Florence, we dig to our deeper natural roots, where we discover the secret of our revolution's universal appeal.

So, we Americans, in our majority, are now caught asleep, unprepared for the terrible crisis now assaulting the very existence of our nation. The policies which Mr. Bush represented during his first five months in office, would doom us all, if continued. To where do we tum, on very short notice, for a different political perspective, a different philosophy of policy-shaping? All we Americans have immediately at hand is the sleeping nationalist heritage embedded in our bones over more than twenty generations - the heritage of the eighteenth-century, worldwide American Revolution, and of the proximate predecessor, the Golden Renaissance. ...

It is an historical fact, that mechanisms exist by means of which the many individuals of a nation are aroused more or less simultaneously, almost spontaneously, to defend their nation from sharing the doom of a ruling regime past its time. Unfortunately, most of those students of history who, have addressed such a special class of phenomena, have lacked the means to understand the agency by which this connection between the power of the one (the multi-generational existence, the nation) and the will of the many (the ephemerally brief individual existence), is established; hence, they have mystified the connection in even the worst way.

I understand this connection, but the exposition of that is more a course of study than statement of a foreword to a congressional candidate's platform declaration. For our immediate purposes, it is sufficient, pragmatically, that we recognize simply that such an efficient connection exists.

It is sufficient to say, that this renewed American Revolution now erupting again worldwide, is my American Revolution, is the standpoint in economics, politics, and general philosophy which I represent in this campaign. Being thus a man from that part of our past, I am the voice of that future toward which all our patriots will now yearn.

I am the voice of the Golden Renaissance, in my role as a defender of our American Revolution. It is time for all true patriots to awaken and to join me.