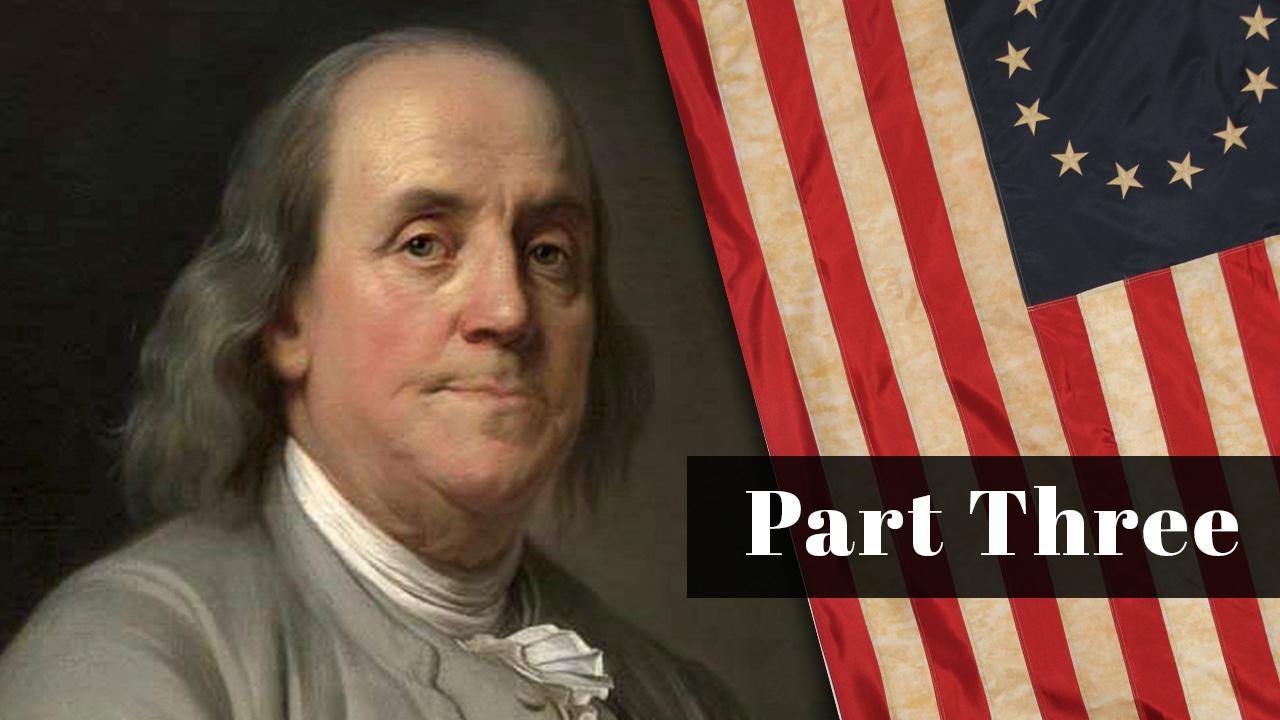 As of this writing, the official outcome of the U.S. Presidential election, under the provisions of the U.S. Constitution, is still not decided. Millions of Americans are in the streets demanding that the vote fraud which occurred on Nov. 3 be overturned. The President’s legal team is fighting tenaciously in the courts to achieve that aim, and President Trump himself, despite the almost unanimous opposition of a treasonous news media, continues to defend Constitutional law.

In this crisis, each of us, as citizens of the Republic, is now feeling the full weight of a responsibility to defend our nation. We are being called upon to do things we have never done before and to speak out, regardless of the consequences, in support of this President and in defense of Constitutional Government. Moral courage is required.

In that light, I offer here a short report on how Benjamin Franklin acted in 1775 to provide leadership and rally others to a desperate cause.

On May 5, 1775 Benjamin Franklin arrived in Philadelphia after spending the previous ten years in England. The city was in turmoil. The second Continental Congress was about to convene. George Washington had arrived in the city, prepared to lead an army to the relief of Boston. It was now just 16 days since the battles at Lexington and Concord, and residents throughout the 13 colonies were preparing to fight for their freedom against the British Empire.

Yet, many of the delegates to the Congress were gripped by fear and indecision. The majority favored reconciliation with Britain, and proposals were put forward for yet another round of petitions to King George, expressing fealty to the crown and begging for fair treatment. The Congress was split, and Franklin himself came under attack, through a whispering campaign led by Richard Henry Lee and James Madison, alleging that he was a British agent sent to spy on the Congress.

Through the first weeks of May, Franklin not only silenced his critics, he quickly stepped into the leadership of the Congress, forcing others to take action to defend the freedom of the colonies. He acted with such daring and courage, that he pulled others along with him. As John Adams reported at the time,

“He does not hesitate at our boldest measures, but rather seems to think us too irresolute and backward.”

Another witness to those events reported,

“Dr. Franklin says we have no favors to expect from the [british] Ministry; nothing but submission will satisfy them…. He is highly pleased to find us arming and preparing for the worst events. He thinks nothing else can save us from the most abject slavery and destruction.”

“As Britain has begun to use force, it seems absolutely necessary that we should be prepared to repel force by force, which I think, united, we are well able to do.”

Franklin knew that there was no alternative to fighting, other than surrender and submission to de facto slavery. One day after his arrival Franklin was elected unanimously to the Second Continental Congress. On May 10, Congress met, and George Washington, with Franklin’s backing, was chosen as the Commander-in-Chief of the new Continental Army. Franklin drafted a declaration to be issued by General Washington, but what he wrote was so strong that Congress was afraid to pass or publish it.

Franklin assumed a paramount role in the revolutionary Congress. In a letter to Joseph Priestley, he reported,

“My time was never more fully employed. In the morning at 6, I am at the Committee of Safety, appointed by the assembly to put the province in a state of defense; which committee holds till near 9, when I am at the Congress, and that sits till after 4 in the afternoon…”

Franklin was put in charge of establishing a system of paper currency; he headed up the effort to collect lead for munitions and devising ways to manufacture gunpowder; he oversaw construction of a secret system of underwater obstructions to prevent enemy warships from navigating the Delaware River.

In July he read to the Congress a proposal for a new national government, not in the form of legislation, but as a discussion paper. He stated that this was offered in the spirit of his 1754 Albany Plan of Union. Later, Franklin’s proposal would lead into the adoption of the Articles of Confederation, although, in Franklin’s original proposal the central government was very powerful, far more so than what was adopted with the Articles.

In September, Franklin was appointed to head a committee with the responsibility for obtaining guns, ammunition and supplies to wage the war. To put it another way, he was put in charge of the war mobilization. That month he traveled to Massachusetts and spent seven days with George Washington at his camp at Cambridge. While in the camp, news came of the burning of Portland and other cities by British troops. The towns were entirely defenseless, and Franklin described the atrocities as “deeds which would have disgraced American savages.”

On October 3, Franklin wrote a letter to a friend in which he stated, “We are on the high road to mutual enmity, hatred, and detestation. A separation will of course be inevitable.”

In November, Congress appointed Franklin to head the new Committee of Secret Correspondence. In that role he would work closely with John Jay and Silas Deane. The work
of the Committee, which was carried out in utmost secrecy, was to approach sympathetic individuals in Europe for the purpose of obtaining guns, supplies and money for the Revolution. Franklin himself wrote a letter to the son of the Spanish King, as well as letters to other of his contacts on the Continent. Deane, with several letters of introduction from Franklin, was dispatched to France, under the guise of being a private merchant.

In September of 1775, Gen. Richard Montgomery, leading a Continental army, invaded Quebec. Initially successful, after a disastrous assault on Quebec City on December 31 the army became completely bogged down, as a frigid winter set in. In March 1776, Congress appointed a commission, with Franklin at its head, to travel to Canada to investigate.

Franklin, now 70 years old, along with the other commissioners were forced to travel 500 miles (each way), much of it through unexplored wilderness, to reach their destination. For one month they traveled through snow covered hills and valleys. They had to navigate through heavy ice on both Lake George and Lake Champlain. At night they slept in makeshift shelters, with only campfires for cooking and heat.

By the time he reached Saratoga, Franklin realized that he was unlikely to survive. “I begin to apprehend that I have undertaken a fatigue that at my time of life may prove too much for me,” he wrote Josiah Quincy. “So I sit down to write to a few friends by way of farewell.”

Later, Franklin would report that, “I suffered much from a number of large boils... in Canada, my legs swelled and I apprehended a dropsy [a sign of likely heart failure].” Upon his return to Philadelphia in late May, Franklin’s health was so bad that he could not leave his house for days. He reported, “I find I grow daily more feeble.”

Yet Franklin’s greatest accomplishments were still to come.


Read Part II: 1774: Franklin in the Cockpit—Face to Face Against Empire