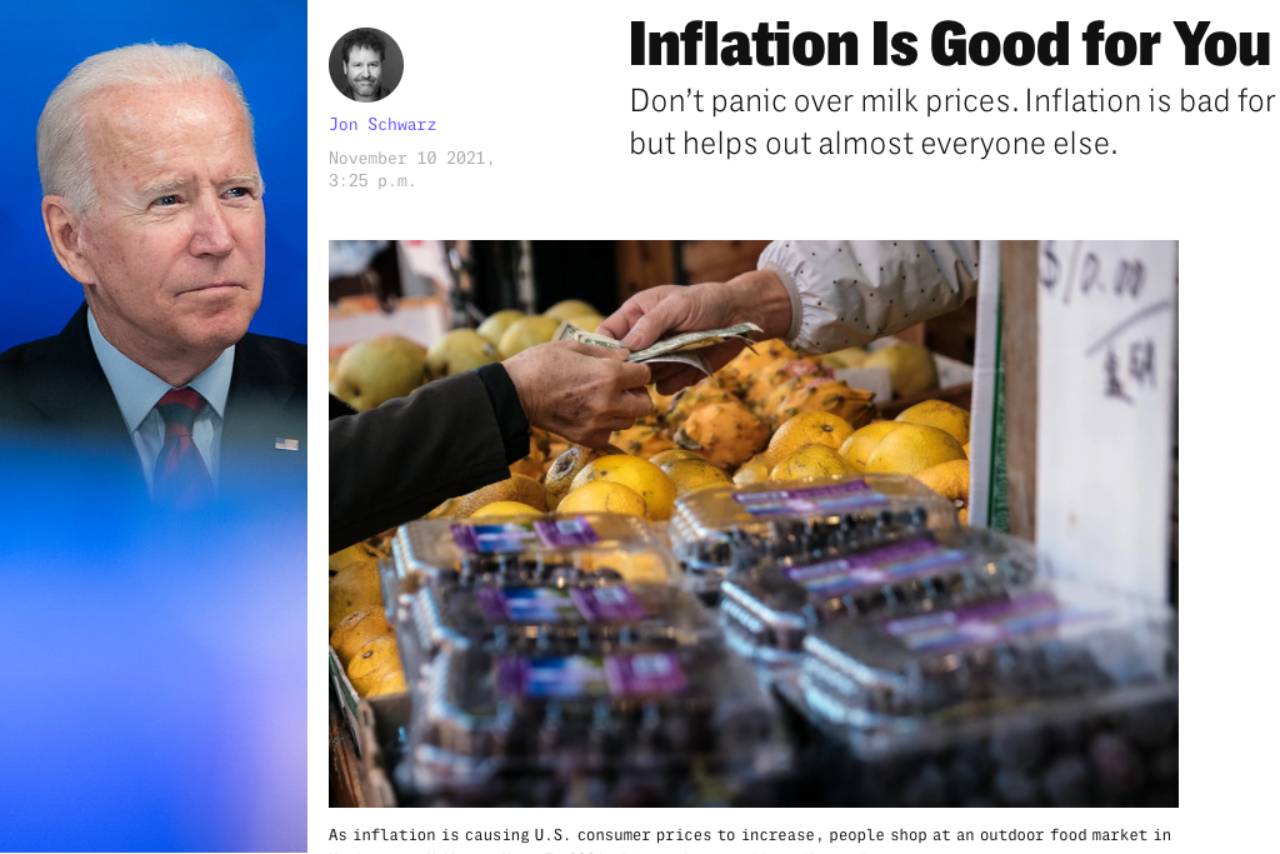 Biden's apologists have an odd view of what is good for the American people.

Democrats Flail to Explain the Inflation They Are Deliberately Feeding

The floundering Biden Administration continued in early November to add to the perception that no one is really in charge in Washington, while otherwise acting deliberately to further destroy the U.S. economy. On the “Joe Is All Used Up Front,” Biden declared the American people too stupid to understand supply chains, after coming back from the Glasgow Climate Summit, where his fart in front of Prince Charles and Camilla was the central discussion in the British press.

In Baltimore on November 10, Biden tried a new tack, attempting to empathize with Americans about out-of-control gas prices while lying that his Build Back Better plan would solve the problem. That bill along with the entire Great Reset Green agenda has set off massive price speculation on fossil fuels world-wide. The Great Reset’s credit starvation for new fossil fuel exploration and distribution and the economic shutdowns of COVID, along with the speculators on the spot markets and the Federal Reserve’s flood of money into the economy, are responsible for the price spikes in energy. But the inflation we now face is the product of much longer-term economic incompetence.

On that topic, President Barack Obama’s economist, Austan Goolsbee, appeared on Fox News America’s Newsroom on November 11 to explain that the inflation now hitting the U.S. economy is a problem caused by the pandemic and a surge of “demand” for actual physical goods. His solution? Shift spending back to “services,” which, he claims, is what the just-in-time supply chains are built for and how the U.S. economy functions. This is a remarkably transparent statement of the philosophy which has destroyed the U.S. economy. We no longer build our own physical goods. Instead, we pay for services of Wall Street bankers in huge megabanks who pay themselves rather than lend for physical production, of insurance companies that have turned our healthcare system into a chargemaster for such items as gauze while utterly failing patients (U.S. healthcare now ranks 11th in the world among high-income countries), and of toll road and similar operators who impose “use taxes” on such infrastructure as we still manage to build. The entire Green New Deal is based on the World Economic Forum’s premise that we should all become renters and not “own things,” while all capital flows are controlled by them.

Right now, large swaths of prime U.S. agricultural land are being bought up by foreign oligarchs and Bill Gates and rented out to farmers. Concentration of ownership allows the new plantation owners to set soaring prices while driving producers out of business. Housing and rent prices, not included in the Federal Reserve’s inflation indexes, are galloping upward with no apparent limit. Raw materials prices world-wide are similarly galloping out of control.

By shifting almost all physical manufacturing offshore, while gifting Wall Street, City of London, and Silicon Valley predators with huge speculative gains, we created the nightmare we now face. The answer is not to repeat this suicidal mistake but to build our way out of this inflation and into a full-set productive economy again. We need a cross-political-party alliance of makers and producers against the predators now.

Brits and Biden Itching for Bloodshed in Ukraine?

The Biden collective has updated its security arrangements with the “government” of Ukraine, provoking massive new tensions on Russia’s border. https://turcopolier.com/joe-biden-more-keen-on-protecting-ukraine-than-the-united-states/ On November 10, Tucker Carlson took on Rep. Mike Turner (R-Ohio), a chicken-hawk who ranted on about the Russia “threat.” Biden’s continuing devotion to Ukraine is based on the British and Biden involvement in the 2014 Ukraine regime-change operation which installed neo-Nazis in the government and mobilized the massive Banderite Ukraine lobby in the United States for the 2016 elections. As is well known, Hunter Biden made a lot of money on this, while his father, as Vice President, served as a kind of colonial viceroy for Ukraine. This dangerous strategy of tension has continued, based on the significant U.S. defense industry contracts to destabilize Russia coupled with British historical obsessions regarding same. Why aren’t we supporting Russia in this conflict rather than Ukraine? Tucker asked. Turner, reflecting the thinking of the current elite occupying the nation’s capital, said we must entertain the possibility of war because Russian President Vladimir Putin is “an authoritarian.”

Tucker could have discussed the ethnic cleansing of historically Russian ethnic groups in Ukraine by the neo-Nazis, or the fact that Crimea has been a Russian possession for centuries, or why we are allied with Ukraine, a country considered one of the world’s most corrupt. While hitting Turner hard, he defaulted to the position that we should be concentrating our strategic ire on China. Rather than bellowing about how China is outpacing us, Tucker might have asked the obvious: Why don’t we focus on a crash program to redevelop our economy? Strategic defense comes from economic strength. Much of what the corrupt defense industry produces for the military is antiquated junk. That is why hypersonic weapons produced by Russia and China have caught our woke Pentagon surprised and gasping to respond.

On November 10, investigative journalist Glenn Greenwald published another extremely useful article concerning the desecration of our system of justice in the United States. In his article, Greenwald highlights the Democrat fascists who salute to necessary criminal justice reform, so long as their opponents are punished in ways that mimic the worst injustices in human history. He cites as examples the Democrat Party’s switch to demanding persecution of Julian Assange; the January 6th fabrications and resulting wholesale transformation of misdemeanors into felonies using the Sarbanes-Oxley Act by an unhinged Justice Department and D.C. judiciary; and finally, the ongoing trial of Kyle Rittenhouse in Kenosha, Wisconsin. In the Rittenhouse case, the entire Democrat Party has engaged in something close to bloodlust in demanding that this young man be jailed, even though his trial has demonstrated overwhelmingly that Rittenhouse acted in self-defense. You can read it here. https://greenwald.substack.com/p/democrats-are-profoundly-committed