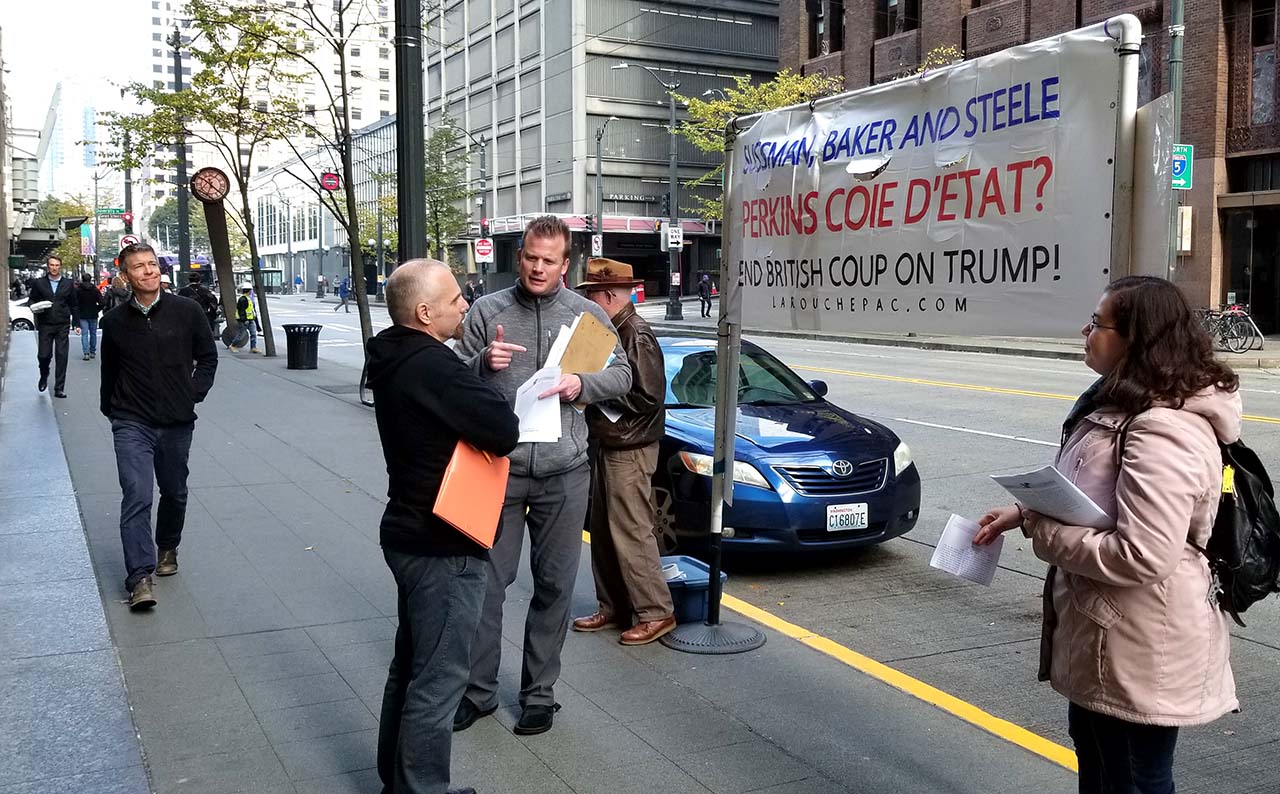 During questions from John Durham’s prosecution team on Friday, James Baker, the former General Counsel of the FBI, reviewed his email communications with Michael Sussman, the defendant, and former lawyer at the white shoe Perkins Coie law firm. One email featured a LaRouche PAC demonstration outside the Perkins Coie offices in Bellevue Washington in 2018, which effectively pinned the origins of the Russiagate hoax on the British, acting in conjunction with Hillary Clinton’s lawyers and the FBI.

Sussman is on trial for lying to the FBI about the circumstances under which he brought fabricated claims of a connection between servers for the Trump organization and Russia’s Alfa Bank to the Bureau. He brought those claims to the FBI on behalf of the Clinton campaign and on behalf of Ronald Joffe, a computer expert and FBI informant, who worked with Sussman to fabricate the claims. Sussman claimed, however, to be acting as a boy scout concerned about national security, and not on behalf of any client when he brought the bogus claims to then FBI General Counsel Baker. Baker was a former colleague of Sussman at the Justice Department and a friend. Sussman’s aim was to trigger an FBI investigation which would serve to legitimate the bogus claims to skeptical reporters. He was successful in generating both the investigation and the media coverage.

The bogus Trump/Alfa Bank claims were part of a Clinton/DNC and British intelligence disinformation and active measures campaign aimed at creating an October Surprise ahead of the November 2016 election. That surprise was to be constructed around major media coverage, triggered by Justice Department investigations of bogus Russiagate claims painting Donald Trump as a Manchurian candidate, a pawn of Vladimir Putin. In addition to the Alfa Bank claims, Sussman and Marc Elias, who directed the campaign from Perkins Coie, effectively laundered the completely bogus British intelligence Christopher Steele dossier on Donald Trump to the FBI, the Congress, and the media at the same time. Elias was counsel to Hillary Clinton’s campaign and is a renowned Democratic Party dirty trickster. Both Sussman and Elias are no longer with Perkins Coie.

According to the transcript of Baker’s testimony, on October 8, 2018, Michael Sussman sent James Baker an email showing a demonstration outside the Perkins Coie offices in Bellevue, Washington. The prosecutor highlighted a sign in that demonstration which read: “Sussman, Baker, and Steele, Perkins Coie D’Etat? End British Coup on Trump!”  That demonstration was by LaRouche PAC, and the sign was one of ours.

The prosecutor asked Baker whether he knew what the sign meant. Before he could answer, a bench conference was called and after it, this line of testimony ended. It seems from the transcript that the reason the line of questioning was terminated involves the reference in the LaRouche PAC sign to British intelligence agent Christopher Steele. Sussman’s defense lawyers have succeeded, so far, in precluding references to Christopher Steele and the overarching conspiracy which was the coup against Donald Trump in Sussman’s trial.