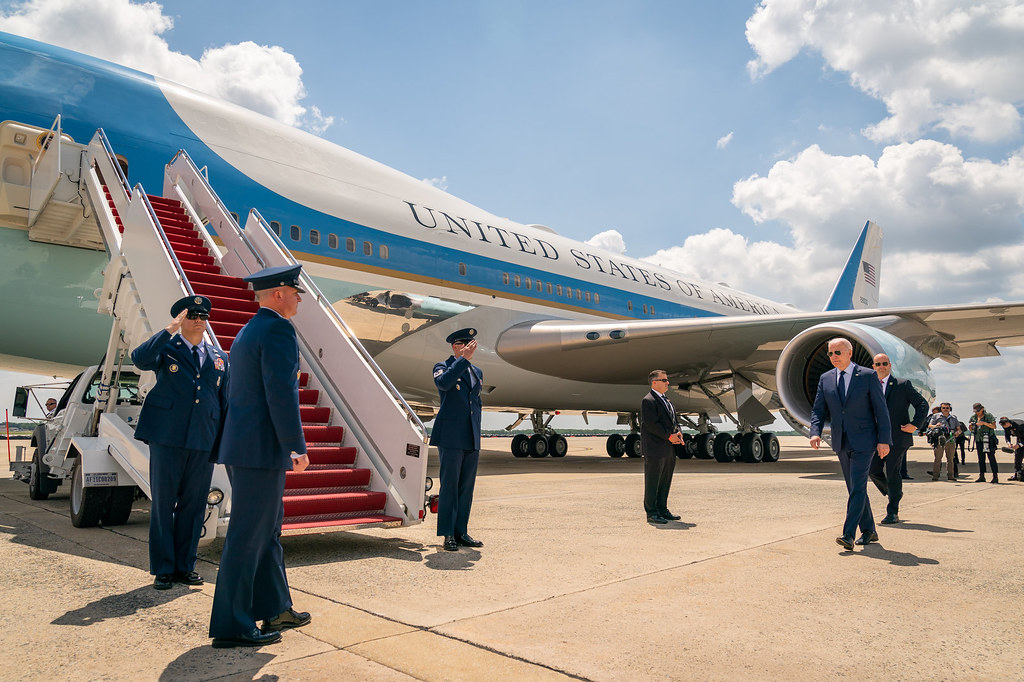 Joe Biden’s trip back to his mind’s home, in London, to dance like some court jester before his City of London guardians and European overlords, should horrify patriotic Americans. We report here on the trip’s first days involving his meetings with British Prime Minister Boris Johnson. This weekend the G7, representing Britain, France, Germany, Italy, Japan, and Canada, meets in Cornwall, England. Biden will then fly to Brussels to meet with the EU and NATO to be followed by his Wednesday, June 16th summit with Russian President Vladimir Putin in Geneva. We will report on these events as they occur.

So far, Biden has pontificated at every opportunity that “America is back,” meaning: “We’re back in this ugly oligarchical globalist club which seeks to control the world. We’ll cede every ounce of the sovereignty Donald Trump fought so hard to win back because we are, primarily and simply, the globalist anti-Trump. And, yes, we’re going to be the world’s cop yet again, ready to fight to the death for whatever elite geopolitical necessity we’re told.” To seal this point, Biden said in his very first speech that NATO’s Article 5, requiring that all NATO allies go to war if one is attacked, was a truly sacred obligation of the United States. In the new Atlantic Charter which Johnson and Biden signed, it is made clear that this includes a pledge to use nuclear weapons.

The Biden entourage also has repeatedly made it known in this trip’s runup that he is seeking a world-wide alliance of “democracies” against the “autocrats” (i.e., Russia, China, Iran, and, based on the actions of his administration domestically, Donald Trump’s supporters in the United States). All of Biden’s activities leading up to the summit are directed to this end. According to a Biden Administration leak to Time Magazine, the goal is to have Putin come away from the summit concluding, “The Americans are onto us, they have us encircled.”

This bluster, of course, is absolutely divorced from the realities currently facing the world. China holds most of the world’s productive capacity and potential at this point, while the deindustrialized advanced sector drowns in a debt trap and the galloping inflation its continuing bailouts of the speculative economy have created. Putin holds supersonic and other advanced weapons systems, the development of which the United States is only now starting. Putin has already given a full pre-summit interview to NBC Television in which he called Donald Trump a very talented and extraordinary individual as well as a maverick outsider. He said that Biden was a career politician and therefore different from Trump although he is sure he can work with him. He does not believe that Biden will be driven by momentary impulses. Putin said, accurately, that that Biden’s reference to him as a killer was simply, “Hollywood macho.”

While Biden snarled, on script, in his first speech upon landing that he was going to “let Putin know what I want him to know” when they meet, he is obviously no match for the Russian leader, who conducts four-hour press conferences without missing a beat. British Prime Minister Johnson’s off-script mutterings on June 10 about Building Back Better (the World Economic Forum’s brand, endlessly and mindlessly chanted by Biden and Johnson), to result in a “gender neutral,” “more feminine” world, is laughable in the context of “confronting” Russia’s battle-tested history and culture. But it is just such fools in history, and their delusions, who have accounted for the world’s deadliest wars.

When he touched down at RAF Mildenhall, England, on June 9, Biden gave over much of the initial show to his wife and handler, Dr. Jill Biden. She pronounced that the senile sock puppet president had been “studying up” for months for this trip. The White House issued numerous pictures of Dr. Jill on Air Force One surrounded by stacks of papers and briefing books, seeming to indicate exactly what that meant. When Biden started to wander off in the ceremony, she caught him up short, instructing him to “pay attention.” He saluted her.

When he spoke, Biden told a story about being briefed in 2008 at The Tank in the Pentagon with “Barack, no joke,” in which the Joint Chiefs said that “climate change” rather than terrorism represented the “greatest national security threat to the United States.... Because there’ll be significant population movements, fights over land, millions of people leaving places because they’re literally sinking below the sea in Indonesia; because of the fights over what is arable land anymore.” (Parenthetically, it should be noted that everything Biden’s tale attributes to climate change is happening now—not because of climate but because of the ongoing economic collapse which started in 2008, and has been complemented by Obama’s forever wars, and the destruction of entire states by the drug cartels and global finance, all of it exacerbated by COVID.)

What Biden said happened in 2008 in the Pentagon’s Tank probably refers to something that began in 2003. In 2003, Andy Marshall, the British-inspired Yoda of the Pentagon’s Office of Net Assessments, the man who did more to destroy the U.S. military than any other, commissioned a paper which argued that catastrophic climate change would result in the next World War. Marshall counted the satanic Dick Cheney, Donald Rumsfeld, and Paul Wolfowitz as his proteges, Friedrich Von Hayek as his favorite philosopher, and the Rand Corporation’s Strangeloves as his intimates.

The paper was authored by Peter Schwartz, formerly of Royal Dutch Shell and the New Age Global Business Network, and Doug Randall of GBN. GBN, at the time, also included Silicon Valley’s Stewart Brand. The paper was leaked to the British Observer which claimed that Pentagon chiefs were trying to cover it up. It predicted exactly the type of fantastic cataclysmic climate caused events that Biden referenced in his Mildenhall speech. Marshall used it to flood the Oval Office of George W. Bush with all sorts of British climate fanatics in order to secure a change of policy. A full account of this is provided by the London Guardian. https://www.theguardian.com/environment/2004/feb/22/usnews.theobserver

The catastrophic climate events forecast in 2003, of course, never happened, and it is unlikely that they ever will. While Bush was not immediately won over to the British utopian strategy, by 2008 his administration was toeing the British line. Of course, in scenarios involving numerous simultaneous climate apocalypses, the military must be given a blank check to surveil everyone, base everywhere, and ensure that everyone will follow orders and do as they are told. The Obama Administration embraced this, while starting new wars throughout the world killing thousands remotely by drone and otherwise.

Former Joint Chiefs Chairman General Martin Dempsey succeeded in finally eliminating climate from his defense strategy and Donald Trump reversed all of this, but now we have come full circle again. In its June 1 issue, Foreign Policy Magazine headlined that the U.S. Defense Department was looking to Britain to model its adopted green military agenda. https://foreignpolicy.com/2021/06/01/pentagon-biden-climate-change-uk/military

The “deliverable,” as they say in Washington, for the Biden/Boris Johnson meetup was a new “Atlantic Charter.” It is meant to reinvigorate and cement the so-called Special Relationship between the United States and Britain, which has always involved “British brains” directing American military brawn. It was just this “special” apparatus which fomented the coup against the American president, Donald Trump, beginning the attack against the maverick outsider well prior to his election.

The PR blitz about the new Charter compares it to the first Atlantic Charter signed by FDR and Winston Churchill. But neither of these clowns, BOJO or Biden, wanted to portray themselves as the new Churchill, one of history’s greatest war criminals. Both attempt to compare themselves endlessly to FDR. In reality, they are closer to Laurel and Hardy, the famous slapstick comedy team (although it is difficult to figure out who is playing Laurel and who is playing Hardy).

The first Atlantic Charter was insisted upon by Roosevelt as a condition for America entering World War II. It specified that the end of the War must be the end of the British Empire, couching this demand in fine diplomatic language. The new Atlantic Charter, signed by BOJO and Biden, recommits the United States to a new form of Empire, the so-called “rules based” international order in which the modern British Empire cloaks itself. https://www.whitehouse.gov/briefing-room/statements-releases/2021/06/10/the-new-atlantic-charter/

In the context of Biden’s putative new conflict between democracies and autocrats, the New Atlantic Charter appears to be a founding document despite its vacuous platitudes. There is a reference to defending democracies and “open societies” in the document itself and one panel of the G7 is dedicated to the same “open society” theme. This is clearly a reference to the ideas of Sir Karl Popper, the British mentor to George Soros. Soros, who was largely responsible for Obama and helped elect Biden, has led the fight for an “open society” in the United States involving extreme libertarianism, drug legalization, decriminalization of most crimes, and extreme identity politics—the polices which are destroying the social fabric of the country. Popper hated Plato, republics, and the nation state, as well as the idea of universal scientific principles, or truth, or the idea that men and women are endowed with any kind of divinity or relationship to God.

The seventh paragraph of the New Atlantic Charter proclaims that the alliance will place a major emphasis on tackling the climate crisis, protecting biodiversity, and sustaining nature, phrased exactly as Prince Philip had framed humanity’s role in the world and directly contrary to the injunction of Genesis 1:10 to “Go forth, multiply and subdue the earth.”

The eighth paragraph recognizes the “catastrophic impact of health crises,” and commits the two nations to fighting such crises by strengthening health systems throughout the world. This is a direct challenge to China and Russia’s vaccine and health diplomacy. We will cover this in more depth in the context of our coverage of the G7 meeting.