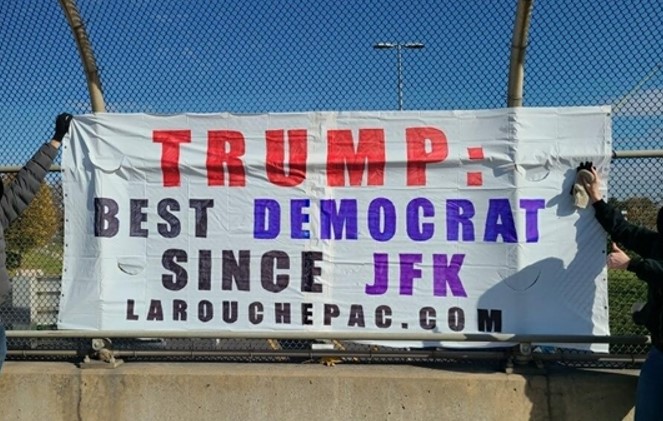 November 22 marked the 59th anniversary of the 1963 assassination of John F. Kennedy, an occasion which serves to remind us that the enemies of mankind will stop at nothing to try to crush any national leader who seeks to advance the spirit of our great Republic. Witness the subsequent assassinations of Martin Luther King and Robert Kennedy, the attempted assassination of Ronald Reagan, and the incarceration of our founder, Lyndon LaRouche. For the past 6 years, Donald Trump has been the target of those same forces. We now stand at an inflection point, one in which our actions will determine whether we can resume our march to the future, cut short on November 22, 1963.

That is an appropriate setting in which to look at the discussion and reevaluation which is underway in the wake of the midterm elections. That reevaluation is especially intense in states where America First candidates and their grassroots armies waged an uphill and underfunded fight against the Uniparty. In key rust-belt states, such as Wisconsin, Pennsylvania, and Michigan, we lost important battles. As anyone who is sentient knows, the propaganda arm of the elites is now regurgitating the narrative that Donald Trump lost the election, that independents and youth are turned off by the toxic character of Donald Trump, and that now we must turn to a neutered version of Donald Trump.

In my lifetime, I’ve twice watched the American people crumble in the face of such enemy-spawned narratives. Despite the overwhelming belief (and evidence) that John Kennedy was the victim of a broad conspiracy, most Americans (after a few years) tucked away those beliefs and got on with their lives. And, when Lyndon LaRouche was subjected to the first “Trump treatment” in the 1980s and was thrown in jail by a Robert Mueller-originated witch-hunt, legions of our supporters decided to no longer associate with such a “political extremist.”

Donald Trump sparked something different—a movement of citizens capable of fighting in the face of unbelievable political, legal, and propaganda warfare. The Trump movement has stood up to such psychological warfare for 6 years, and most of them still are. But, battle fatigue and failure of nerve are having the desired attritional effect on some.

The Real Lessons of the Midterms

First, the midterm election was not Democrats versus Republicans. In reality, it was Trump and his grassroots MAGA movement against EVERYBODY. From that standpoint, we did damn well—taking the House, winning the popular vote by 9 percentage points, making gains in key demographics, and getting out significant vote totals in battle-ground and blue-collar states. In many cases, the enemy was forced to carry out very visible outrages, as they did with election day chaos in Maricopa County, in order to “win.”

Second, outside of the youth being cultivated in the petri-dishes known as college campuses, a recent poll shows that the younger generation is trending toward more Trump-like values: on the economy and rejection of forever wars, in particular.

Third, stop calling them independents and start calling them by their real name—workers and producers. In his November 18 Op-Ed in the Washington Post, Sen. Josh Hawley hit the nail on the head when he wrote, ”The GOP is Dead, the New GOP Must Listen to Working People.”

Fourth, what the MAGA movement was missing in the midterms was a grand, aggressive, top-down economic policy which fulfills what Hawley calls for: “A reborn Republican Party (which) must … offer good jobs and good lives, not just higher stock prices for Wall Street. And it must place working Americans at its heart … rather than treating them as resources to be exploited or engineered away.”

LaRouchePAC has launched “Project Prometheus” to revive that spirit and to fight for those policies. We will not win over or mobilize blue-collar workers and young people on the battlefield of social issues.

We will win them over to a fight which sweeps aside the collapsing economic policies of Wall Street and its green agenda. We will win them over to the mission of creating an industrial renaissance, driven by a crash program to produce hundreds of nuclear power plants which will, in turn, provide the quality and quantity of energy needed to carry us into a fusion-based economy and into the solar system. We will re-create that American identity of producers, builders, and explorers.

There are two groups of people who are abandoning Donald Trump: (1)  those who have always opposed the principles of the American Republic and have now been forced out of their stealth-mode into the open, like the Murdochs and Citadel's Ken Griffin; and (2)  those who feel battered and bruised by defeats recently suffered and are capitulating to the psychological assault of the media, the money, and the intelligence community.

What today’s oligarchs fear is the same thing the Olympian gods feared, as recorded in Aeschylus’ drama, Prometheus Bound—that mankind equipped with fire and scientific knowledge would not submit to being slaves. They fear what Kennedy was in the process of creating, a technologically-proud and optimistic American population which would lead the world in throwing off their imperial reign. Today, they fear the combination of three things: Donald Trump, the grassroots movement which has emerged around Trump, and the policies which can defeat today’s oligarchs. Trump will continue to fight and LaRouchePAC will provide the Promethean policies to free mankind from today's would-be Olympian gods. It would be a tragedy if too many among us abandoned the movement and walked off the battlefield now.