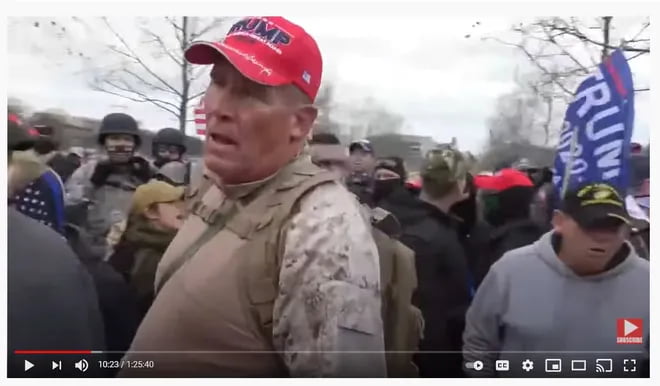 Ray Epps in the red hat during the January 6th controlled Capitol riots.

All you had to know about the latest episode of the January 6 Committee afternoon Soaps, which occupied network TV on Tuesday, July 12th, is contained in a New York Times article of July 13th. Other than the significance of the Times piece in underlining the government’s role in the two-hour controlled riot itself, the primary purpose of these Soap Operas is distraction. As the country reels from hyperinflation and an economic collapse, this is Washington’s current and failing attempt to distract the population from the simple fact that it has no answers.

In its piece, the New York Times goes hog wild in exonerating one Ray Epps. Epps, a member of the Oath Keepers, was caught on video on January 5th and 6th in a fervent mission—directing Trump supporters to go into the Capitol building. On January 5th, the crowd around him chanted that he was a Fed. His actions led the FBI to put him on the initial 20-person Most Wanted List for activities on January 6th. (He was later removed from the list completely and never charged, without explanation). The New York Times, in its own previous incendiary video concerning the January 6th “insurrection,” put Epps in a starring role.

Darren Beattie, who has produced compelling reports demonstrating that the January 6th riot was a controlled riot and not an “insurrection,” puts Epps at the center of what he calls the “Fedsurrection.”  You can read Mr. Beattie’s report here, and you should do so, as it shows why the New York Times felt it had to go so far out on the limb in its Wednesday piece.  Tucker Carlson and Beattie also effectively covered this subject on July 14th.

Beattie speculates that both the Oath Keepers and the Proud Boys were set up to take the fall in a government-run riot. Both groups are heavily infiltrated by the FBI. The Times piece ends with the threat by Epps (and, obviously, his current sponsors) of legal action against anyone exploring this topic further.

Despite the evidence Beattie amply sets forth, the January 6th Committee, the Department of Justice, and their propagandists in the corporate media have declared exploration of an intelligence community role in provoking and steering the January 6 riot off-limits -- a “conspiracy theory” without legs. The recent Whitmer kidnap plot trial in Michigan fully displayed the FBI’s entrapment capabilities. The Whitmer plot employed more FBI agents than alleged militia participants, and the FBI dictated the actions, resulting in two acquittals and a hung jury concerning two other defendants in the initial trial.

Both the January 6th Committee and the New York Times say that Epps swears he never worked for any federal law enforcement agency. But federal law enforcement agencies have proven themselves fully capable of lying over the years to cover for their operatives and informants. Executive Order 12333 allows them to do so in terrorism, counterintelligence, and other national security operations. E.O. 12333 is part of the reason this event is described as an “insurrection” and not the two-hour controlled riot that it was.

Further, there are plenty of other National Security State capabilities which are not covered by this denial. In the case of Lyndon LaRouche, for example, Roy Frankhouser and other cutouts steered to LaRouche worked for the CIA. Other operatives worked for the ADL or other organizations serving both the CIA and FBI. A vast array of such operations can be run out of the military, despite the ban on domestic operations. Crowd-control and the psychological dynamics of crowds are, of course, necessary tiers in the mastering of running coups and similar special operations, both in the CIA and the military.

The Times’ attempt at exoneration itself contains a tantalizing “tell.”  Here it is: “Mr. Epps also said he regretted sending a text to his nephew, well after the violence had erupted, in which he discussed how he helped to orchestrate the movements of people who were leaving Mr. Trump’s speech near the White House by pointing them in the direction of the Capitol.”  What else is on Epps’s phone? Was the Times piece occasioned because other inculpatory Epps texts are about to be disclosed? Positively framing materials which might otherwise demonstrate criminal culpability is a favorite mode of PR and New York Times damage control. Just look at the infamous Hunter Biden rollout in the New Yorker of 2019 or the New York Times puff piece about the Biden family’s lucrative dealings in China following the arrest of CEFC China Energy’s Patrick Ho.

Tuesday’s Congressional January 6 Soap Episode? Yet another rehash of stuff that has already been reported: the dramatic meeting at the White House where White House lawyers and lawyers associated with Patrick Byrne’s pro-Trump operations squared off and almost came to blows. A sophomoric lecture by the excitable and overstimulated Jamie Raskin concerning alleged extremist plots against the United States. The lead for the next day’s sewage dump was dictated by Liz Cheney, who stated, drum roll please, that President Trump allegedly tried to call a former White House staffer who is a secret witness to the Committee. Conclusion:  The walls are closing in, again.

Matt Taibbi, no fan of Donald Trump, notes that the Democratic Party has destroyed itself in its endless inquisition of Trump. All its episodes end in failure with the public seeing Trump as a victim and a martyr as his popularity grows. Here’s how Taibbi describes the state of mind of his numerous friends in DC:

“A friend who worked on the Hill for years insists the city was ruined by Game of Thrones. Everybody with a political job in the capital thinks of his or herself as a soldier in a thrilling bloodsport, instead of a pawn chipping away for incremental improvements somewhere. The Trump show is six years of thirtysomething Dems in gingham and power dresses gunning to be Arya killing the Night King. They think 80 million Trump supporters will collapse into ice cubes if they get him. It doesn’t work that way. You have to win in 50 real states, not Twitter.”