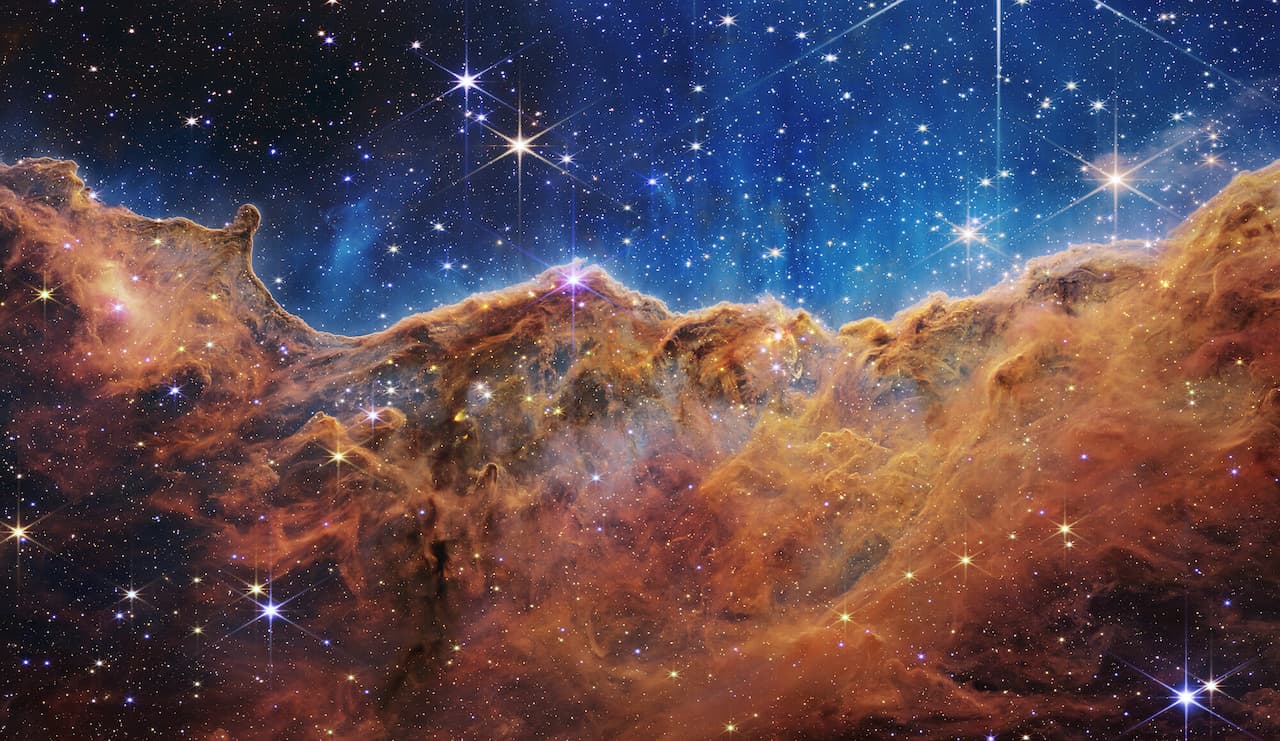 Behind the curtain of dust and gas in these “Cosmic Cliffs” are previously hidden baby stars, now uncovered by Webb. We know — this is a show-stopper. Just take a second to admire the Carina Nebula in all its glory. July 12, 2022 NASA

With the first beautiful images now coming from the James Webb Space Telescope, we are being told that it allows us to see back to the time when the first galaxies and stars were created right after the “Big Bang.” The “Big Bang” and its associated “Second Law of Thermodynamics” assert that our universe began at a specific point in time, some 13.8 billion years ago, with a massive burst, that sent all matter from one initial ball, expanding to all corners of space.  According to this theory, we, and everything we can see, exist in this continuing expansion from that initial explosion. There are variations on the theme—some have the universe continuing to expand forever, others have it slow down, then contract into a universal Big Implosion somewhere billions of years down the line.

The trouble with all these theories is that their fundamental premises are merely assumed, but have never been demonstrated to be true. They are based on axiomatic quicksand!  Three centuries ago, Isaac Newton and the Enlightenment promoted a mechanistic explanation of physical processes, which was politically imposed by the circles around the Bank of England.  Prior to Newton, scientists like Johannes Kepler and Nicolas of Cusa had viewed man's investigations of nature as part of coming to understand God's creation.  To them there was no hermetic division between religion and science.  While Newton envisioned a world of hard-ball particles moving within empty space, his philosophical adversary (and an intellectual mentor of Benjamin Franklin), Gottfried Leibniz, insisted that Newton's universe would periodically run down and have to be wound up again like a clock, and that God would never have created such a universe. He posed a universe in which there is no empty space. Rather, space is shaped by the matter it contains, an idea later developed by Einstein. For Leibniz, matter was not inert hard balls, but was, at every level, in motion and in a process of development—the opposite of the idea of universal decay!

In the eighteenth and nineteenth centuries, the mechanists pushed their agenda, but reality kept presenting anomalies that didn't obey their laws.  Life was especially problematic!  How do you explain the development of extremely complex life forms and ecosystems on the basis of billiard balls?  How do you explain human intelligence?

As we get to the twentieth century, there was a big push to codify the reductionist outlook in physics.  Bertrand Russell took the lead in his attempt to put all of science into the straightjacket of a logical-mathematical system.  Science throughout the twentieth century suffered as a result, despite attempts by those like Einstein, Max Planck, and Vladimir Vernadsky to hold back the tide.

So, what is the fight all about, and why would the banking elite care about such things?  Ah!  They care a lot about how people think, and how they think about man in the universe.  Are you just a worm pursuing your pleasures, who will someday soon disintegrate into nothingness?  Or are you a human with God-like capabilities to figure out how the universe works and consciously participate in the process of creation?  A society with the former worm-like view is much easier to control, say the oligarchs.

This was the battle of the twentieth century and on through today.  What is called the Second Law of Thermodynamics originates from work by Sadi Carnot in the early nineteenth century, who showed that not all the heat energy of an engine could be transferred into the motion of a piston; some would be lost to the surroundings, no matter how well you designed your engine.  The term entropy was coined to identify this lost energy.  But this useful discovery was later extended illegitimately to the idea that the entire universe is winding down into a kind of heat death.

In the 1890's, Ludwig Boltzmann gave a further boost to the entropy theory of the universe with his theory of statistical mechanics.  This gave an explanation of how gases behave in the large (pressure, temperature, etc.), based on the idea that the gas in a container is composed of minute particles moving around at random, bumping into other particles and into the sides of the container, at rates dependent on the energy or temperature of the gas.  The idea was that you didn't need to know the motion of each particle; you could simplify the whole matter with a statistical average of quadrillions of particles.  While this did have some usefulness, it opened the door to a real perversion of physics called quantum mechanics. Niels Bohr and other wizards of this field claimed that at a sub-atomic level, action is random. For them, statistics wasn't just a useful tool--it was the law; causality was out the window, and we can't really know how the world works on a fundamental level.

In 1926, Einstein famously said, “God does not play dice with the universe,” but, unfortunately, he became more and more the outlier, as the students of Bertrand Russell came to dominate physics.  Over the succeeding decades, the view that the world is unknowable to the human mind, and that the universe is in a long-term decay into entropic heat-death, came to penetrate the outlook of most of our society—even of those who never studied physics and never heard of the Second Law of Thermodynamics.

In the 1940's there was still a healthy resistance in the population. Biologist Pierre Lecomte du Noüy's Human Destiny, which included a rigorous refutation of a purely mechanical explanation of evolution, was a best-seller.  The young Lyndon LaRouche was provoked to refute the mechanistic theories of the brain in Norbert Wiener's Cybernetics, leading to his subsequent breakthroughs in economic science.  At that time there was still a commitment to the future in American culture, to having families, and churches still functioned as a way for people to connect their day-to-day lives to the eternal.

How that has changed!  Now children are taught to hate the human race as a plague upon the planet: creating the menace of plastic, and poisonous CO2!  Many churches are part of this anti-life regime.  Churches that don't go along, tend to ring a bit hollow, victims of the Enlightenment's division of religion and science 300 years ago.

What are we to do?  It's a challenge with many facets.  The James Webb Telescope offers us some hope. Science (true science) has a way of challenging the flawed axioms of a society's customary ways of thinking.  Einstein and Planck created a revolution in the way we think about energy, space, and time, at the turn of the twentieth century.  Reliving their discoveries, even in abbreviated fashion, takes your breath away!  Looking into the cosmos and struggling to comprehend the magnitudes of space and time stretches your imagination.  As we reflect on our own mental process in doing so, we go a step further: here's a tiny being that can think about and understand, even if imperfectly, processes billions of light years away.

This is what now awaits us with the James Webb Telescope.  Astrophysics right now is tied in knots by its mechanistic axioms, so that we have a composition of galaxies of 95% unseen “dark energy” and “dark matter;” objects accelerating “faster than they are supposed to;” and extremely high amounts of energy emerging from black holes, from which nothing is supposed to emerge.  We need our Einstein or Planck of today to open the door to a whole new way of looking at the universe.

For this we can be optimistic. Even amidst the cultural wasteland of the last fifty years, since the last Apollo mission and the spread of the Malthusian green ideology, there was still widespread enthusiasm for the successes of the landings of Curiosity and Perseverance on Mars, and the huge 2019 Capitol Mall celebration in commemoration of the Moon landing.  The human spirit is hard to crush!  With images now coming from the James Webb Telescope, we are going to get more paradoxes, more problems we can't solve with the old theories.

Let's encourage young minds to take up this challenge.  Perhaps we can even restore respect for the Creator's greatest creation.