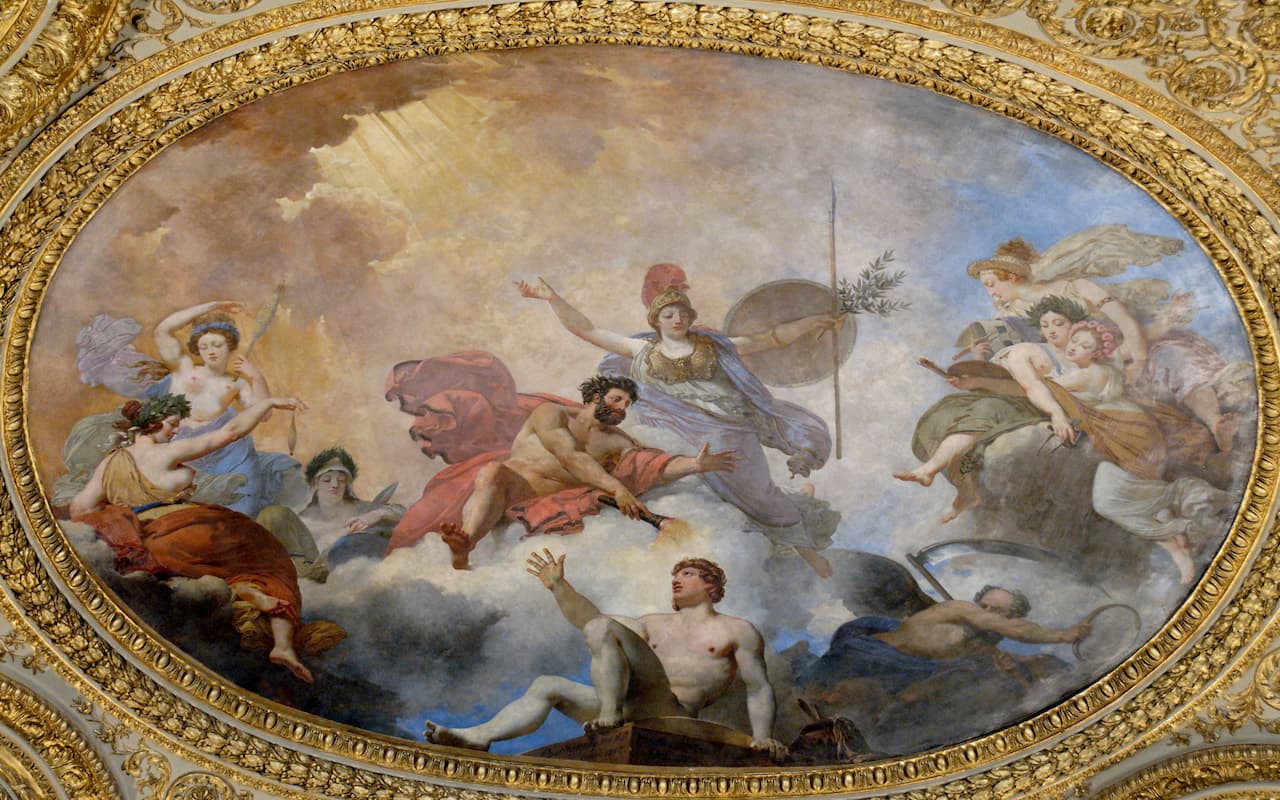 Man formed by Prometheus and animated by Athena. Painted in 1802 by Jean-Simon Berthélemy, painted again by Jean-Baptiste Mauzaisse in 1826.

Joe Biden and the Democrats are bragging that the Midterms resurrected the “Blue Wall,” which, B.T. (before Trump), cemented Democratic presidential and congressional victories. They think this is the path to defeating a Trump candidacy in 2024, if they fail to put him in prison as the result of the police-state measures now deployed against him and his supporters—measures worthy of Tomas de Torquemada or the Stasi of the former East Germany.

We have another idea.  Beginning today, we are dedicating ourselves to building a “MAGA 2024 Shock Wave” in these states. It will be based on creating a nuclear power renaissance and a modern industrial and infrastructure platform rivaling any country in the world. This task requires an accompanying shift in education and culture, a revolution in which science, engineering, and American creativity and “thinking big” become the dominant cultural values once again. It is a shift akin to John F. Kennedy’s challenge to go to the Moon, “not because it is easy but because it is hard.”  Kennedy’s challenge nationally produced much of the technological and scientific infrastructure upon which our economy rests still today. That is our major problem. We have not advanced beyond that, and, in fact, the Green New Deal’s intent is to drive us backwards into the type of primitive economy which its oligarchical overlords can readily control.

We are calling this Project Prometheus, a revolution on a par with Prometheus’ bestowing fire on mankind and freeing us from the arbitrary power of Zeus, the god of the oligarchy. We think it will appeal to President Trump, whose primary identity, when it comes down to it, is that of a producer and a builder, in complete solidarity with others like him or aspiring to be so. Our idea presents a mission which will inspire many others to take up this human identity.

We are going to refuse to play by the rules of the set piece warfare in which our present elections and politics are conducted.  Our enemy has shown itself and all its games.  It is incapable of thinking or creating and can only rule if a docile population is forever simply reacting or complaining within a rigged game.  It is time to kick over the entire chessboard.

By doing this, we intend to completely overthrow the sick economic nostrums of the dominant parties in Washington, DC. Their support of the Fed and their idolatry for Wall Street created the economic collapse which is now bearing down upon us, and which they intend to solve by looting the working- and middle-class population yet again. Our mantra for these two years is, “People and Producers First,” not the banks, not Wall Street, not the mega multinational corporations behind Joe Biden and the Green New Deal, not the war-monger defense industrial complex which profits from the forever wars—including those underway and planned against Russia and China which just might end up extinguishing humanity.

Like Donald Trump, we believe that the future belongs to the patriots, not the globalists representing the modern British financial empire. But that is true only if we create that future.

Already, the Republicans betrayed by Washington’s Republicans are awake and ready to fight. As Michigan’s candidate for Governor, Tudor Dixon, put it, her loss was caused by the Michigan Republican Party run by the same establishment types who have run the party since George H.W. Bush. The Michigan slate, endorsed by Trump, was denied any significant funding or backing from Washington and the state GOP.

After a week in which the hyenas of the Washington Republican donor class and their media surrogates (led by the Murdoch Wall Street Journal, Fox, and the New York Post among others) went gaga over Ron DeSantis and demanded that Trump not run, a MAGA revolt and backlash is brewing nationally. This backlash has resulted, as of November 11th, in significant calls to delay and reconsider what was to be the scheduled November 16th coronation of Mitch McConnell to lead the Senate. Senators Marco Rubio, Josh Hawley, Mike Lee, Ron Johnson, and Rick Scott are leading the charge on this. There are also calls for Kevin McCarthy’s House leadership vote, also scheduled for next week, to be delayed, led by the Freedom Caucus. Otherwise, there are calls to fire all the generals and consultants running the RNC and its associated Congressional campaign committees. We support this; failure should not be rewarded.

It is the “Stop Trump” traitors who are responsible for Republicans prevailing by more than six million votes in the popular vote for Congress but failing to win an overwhelming House majority or to establish control of the Senate. The “Red Tsunami” was largely a propaganda invention of Newt Gingrich, Frank Luntz, Karl Rove, and Fox News. In reality, the battleground states where key elections occurred are called battlegrounds for a reason. Due to reapportionment, whoever wins in states like Michigan, Pennsylvania, Georgia, Nevada, Arizona, and Wisconsin will do so with razor-thin margins.

The first factor in winning involves candidate character, but not the PR description of it offered by the present culture. To win in the present environment, the candidate must be a focused, honest, and ruthless fighter wedded to the forgotten men and women of this country, like Donald Trump, Kari Lake, and Ron Johnson. Whether DeSantis is, as Trump says, only mediocre in this regard while terrific with his PR, remains to be seen. What can be said with certainty is that he is no Trump; he will bend under the types of pressure imperial Washington—as opposed to Disney—applies. His disappearance and silence about the raid on Mar-a-Lago, and total financial support from Republican Wall Street megadonors and never-Trumpers like Ken Griffin and Paul Singer, supports Trump’s analysis. It should be remembered that Singer sponsored the Russiagate dossier and work of Fusion GPS before the DNC and Hillary picked them up.

The Democrats effectively played the margins in the battlegrounds with a targeted mobilization of the youth vote through TikTok and issues like student debt-forgiveness and abortion, and a sophisticated and effective get-out-the-vote operation utilizing mail-in ballots to harvest their vote, along with billions in campaign cash. There is nothing like cash bribes in an environment of economic desperation, to sway labile or indifferent targeted voters. At the same time, the police-state and Gestapo attacks on Donald Trump and the MAGA movement created a climate of fear which suppressed the Republican and independent vote.

In 2016, Donald Trump won as the result of successfully identifying and mobilizing discontented voters who did not regularly vote, and Reagan/JFK Democrats. The central message was make America Great by making America First in growing the economy and ending the deadly reign of the globalists.  This time those voters stayed home.

In contrast, the McConnell-led Washington Republicans sabotaged the potential Republican vote at every turn by overtly and covertly attacking MAGA and Trump. They offered no compelling reason for anyone to vote Republican, other than the accurate perception that the nation itself is on the verge of collapse, as demonstrated by rampant crime, drug-addicted homelessness and mental illness, an open southern border, and raging inflation. “Bringing balance to Washington” will somehow cure this, they claimed.

But the policy vision embodied in their “balanced” thinking is blind to the future. If you read the Republican Study Committee (RSC) report concerning their vision of the 2023 budget, it is a horrendous hodgepodge concocted in pure reaction to the noxious measures imposed by the Biden Administration. It exposed Republican candidates to Biden’s canards about privatizing Medicare and Social Security.

Overall, it suffers from the assumption that the economy is a fixed mix of people and resources which need to be “balanced.”  It utterly fails to focus on measures which will actually grow and transform the economy. The issue is not so much “spending money,” but how you spend it. The Tennessee Valley Authority, for example, was a great project which paid for itself and anchored the development of the entire southeast.

To cite but one example of the blindness suffered by the Republican House intellectuals, the section on energy in their budget is entirely about natural gas and oil production and fails to even reference nuclear power, or eliminating the regulations that have stymied its development. Yet nuclear power and fusion power are transformative and revolutionary energy sources which will actually grow the economy in leaps.

The RSC budget is also larded with assumptions supporting a “new Cold War” with Russia and China and requiring vast increases in the defense budget.  Most Americans, however, stand with Trump and are adamantly against Washington’s wars.  The present war with Russia has shown that the defense industry is producing junk weapons which do not work, and that the nation is completely lacking in any focus on transformative measures, such as beam weapons defense. Creating a definitive defense against nuclear weapons eliminates MAD, creates precious space for negotiating new relations among sovereign nation states, while offering huge ancillary technological advances for civilian economies.

Washington’s Republicans, with precious few exceptions, either joined or failed to effectively oppose the four-year coup against the elected President, failed to challenge the November 2020 presidential election, and have acquiesced in the police state measures embodied in the January 6th roundups and prosecutions and the continuing quest to throw Donald Trump into prison. They now portray these atrocities against the Constitution as personal “grudges” held by Trump, and as “litigating the past” from which the nation must now rapidly move on. “Nothing to see here, folks.” The result is that many MAGA voters did not show up for the midterms, either as the result of fear or of disgust.

The lack of will and leadership evinced by many, even for the minimalist reactionary program they campaigned on, left voters pessimistic about change and weary of generals who, unlike Trump, will not fight. Look at the difference with Senator Ron Johnson in Wisconsin, who won his race despite the flood of millions of dollars directed against him, a soft Republican party in his state, and a dedicated Democratic vote fraud apparatus. Johnson has fought relentlessly for Donald Trump, against the Deep State, and against popular opinion concerning COVID mandates and junk science.

We intend to bring that will and single-minded focus to building the new MAGA wall by creating a future, one in which one income can support a family, and in which new discoveries and inventions, exploring the wonders of the universe, uproot the cultural pessimism and cynicism constituting the very dark heart of the now overtly Satanic Democratic Party.

LaRouchePAC needs your financial support. Donate now -- help us keep up the fight!