We’re hearing a lot of talk about infrastructure these days. Sure, everyone’s for building and repairing roads, bridges, ports, and modern rail transport. But that is not a solution to the problems we face as a nation. The US has been destroyed as a productive economy over the past 50 years, through deregulation, environmentalism, outsourcing, Wall Street bail outs, etc. The concoction being cooked up by the globalist controllers of the current occupant of the White House has nothing to do with improving our economy, and will actually make it worse. Powering the nation through wind and solar power, as proposed in the Great Reset and the Green New Deal, represents a huge step backward into a far more primitive mode of human existence. The phony debate between pouring resources into make work projects, diversity training programs, the Green New Deal, and other nonsense vs. anti “big government” fiscal conservativism is just that --phony. All their plans will lead to the further destruction of the economy and the living conditions of the people, unless we undertake a real infrastructure building program now.

As LaRouche PAC has continually outlined, the goal of building infrastructure, is to leapfrog society to a higher platform of productivity and prosperity than the one at present. Lyndon LaRouche noted, money only performs its proper function through promoting increasingly productive, capital-intensive investment, per capita and per square kilometer, in both basic economic infrastructure, and in methods of production for the long-term development of the more highly productive, more advanced technologies. This means developments which must offset the effects of technological attrition, and which represent, in effect, a method of discovery expressed as a physical net increase in the human species' expanded power to continue to exist into an unbounded future, as per capita and per square kilometer of relevant territory.

Thus, any sane infrastructure program presently would be pursuing advanced nuclear power and fusion energy as the power source for its infrastructure platform. The last such U.S. great project fulfilling LaRouche’s definition of infrastructure was the Apollo program of the 1960s. The earliest such project in American history, the building of the Erie Canal, also perfectly illustrates this point.

The Erie Canal was not just a transport route. It was a great project that changed history for everyone, and it played a significant role in creating a productive future for the nation. Completed in 1825 and celebrated internationally, it was hailed as the Eighth Wonder of the World. Its conception, planning, and construction was an American manifestation of Renaissance thinking, combining the human imagination in the ability to make grand discoveries, and solve problems. When the canal was completed, and the Lockport Locks were opened and fully operational, it was as wondrous then as the Space Program which led to man’s first Landing on the Moon in 1969 was to the generation which came to adulthood in the 1960s and 1970s. 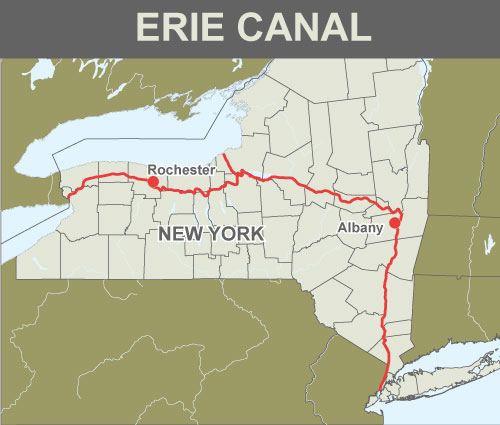 The idea of canals in America goes back to the 1700s. George Washington and other American patriots saw the potential of the immense wealth of land to the West, and envisioned the connection of the eastern cities to that wealth through a system of canals. The canal’s main proponents were DeWitt Clinton and Gouverneur Morris. Clinton, a true Renaissance Man, was a politician, naturalist, educator, and author and did more to shape the future of NY than anyone else in its history. From 1798 to 1802, he was an elected member of the NY Assembly and Senate. He served as Mayor of New York City from 1803 to 1815, and helped modernize the Island of Manhattan. He also helped establish a Public School Society, the New York City Hospital System, the Orphan Society, and the NY historical Society. He was Governor of NY from 1817 to 1822, and again from 1825 to 1828. Gouverneur Morris wrote the preamble of the US Constitution, and otherwise played an essential role in the forming of the new union. He served as a Senator from NY from 1800 – 1803, and as Chairman of the Erie Canal Commission from 1810 – 1813.

The Erie Canal Commission conducted a survey, and then went to Washington, D.C. with its plan. The canal would be built from Buffalo to Albany, NY, and connecting on the Hudson River down to NY City, a total of 353 miles. The idea was rejected by Presidents Jefferson and Madison. Jefferson said, “It’s a splendid project, and may be executed a century hence. Here at the Potomac is a canal of a few miles, projected by George Washington which has languished for many years because the small sum could not be obtained. And you talk of making a canal 353 miles long through wilderness. It is little short of madness to think about it!” Madison said it would bankrupt the federal government.

British dupes and environmentalists were against it, including the Van Buren machine in New York. Nathaniel Hawthorne called it an “environmental disaster.” Others said it would make life too speedy, stressful, and complicated! It was derided as “Clinton’s Ditch.” But that didn’t deter its proponents. Clinton organized mass rallies in support of the canal, and circulated a petition signed by more than 100,000 New Yorkers. It was financed by the State of NY, through public funds and private investors. Other proponents were John Quincy Adams, James Fenimore Cooper, Robert Fulton, William North, and aide de camp von Steuben, Stephan Van Rensselaer, and surveyors Elkanah Watson, Simeon DeWitt, and Joseph Ellicott.

There were no civil engineering schools at the time so the project itself became a laboratory of craftsmanship, including carpenters, masons, and blacksmiths. New inventions were required to overcome the obstacles, including swamps, mountains, valleys, gorges, streams, limestone deposits, as well as the elevation traversed from sea level to 571 feet at the highest point. Surveyors and lawyers became on the job engineers, informally known as the “Erie School of Engineering.” In the process, they were creating a skilled labor force, including the first longshoremen. 30 thousand men were employed to work on the canal. Many new patents were submitted, including new technologies for locks, stump pullers, hydraulic cement, and other materials for the gates, valves, railings, and bridges. 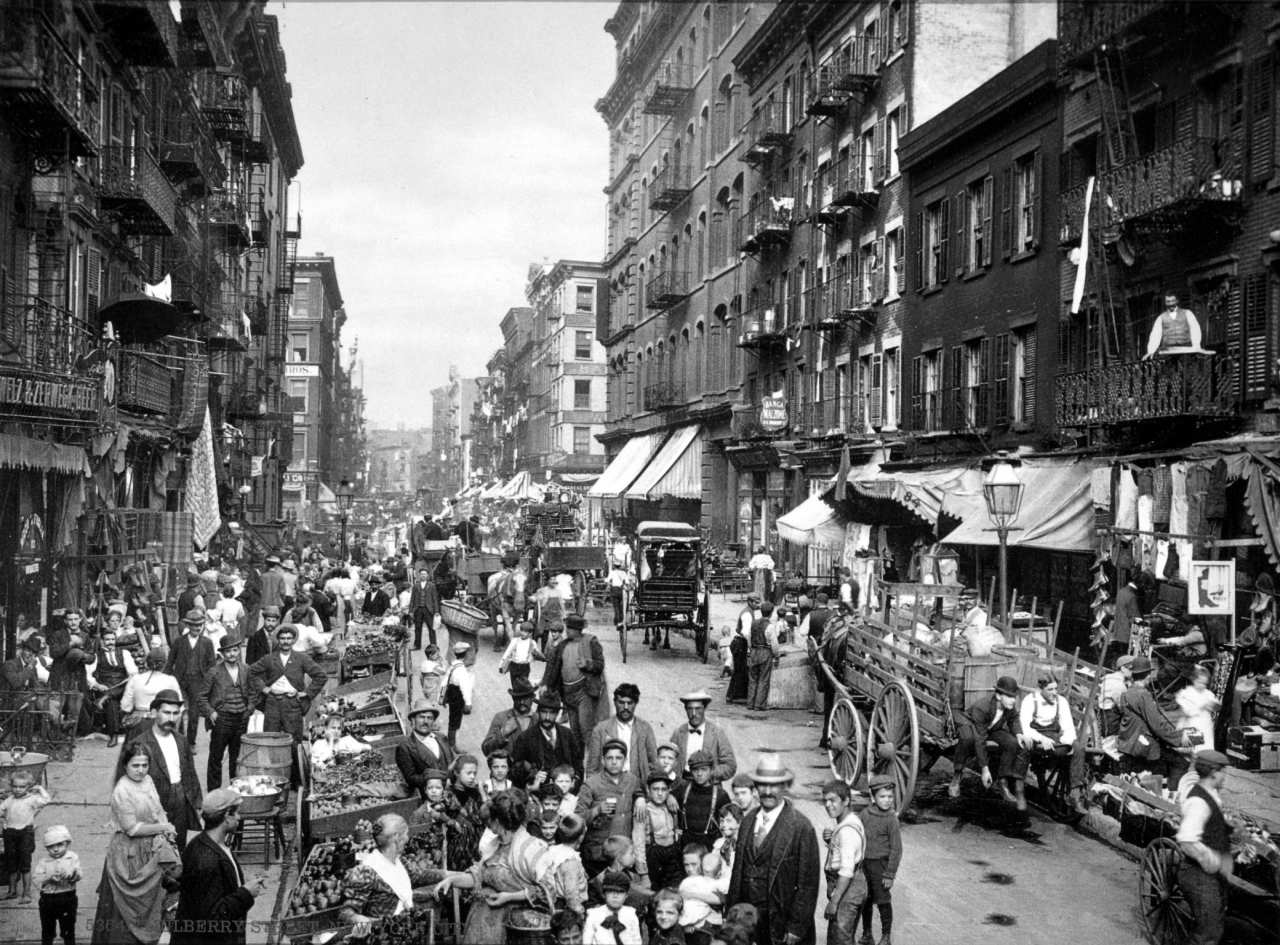 New cities, manufacturing, and milling industries were built along the canal route. New Engineering Schools were built, including Rensselaer Polytechnic in Troy, and the Engineering School at Union College in Schenectady with new studies in hydrology and geology. The cost of freight from Buffalo to NY decreased from $100/ton to $10/ton. Financially, it recouped initial investments within nine years. New York City became the nation's most populous city and foremost center of commerce and finance. It also spurred a flurry of canal building in America. Adopted as part of the Whig Party platform, the build-out of the canal system, including cities and towns and industries, provided a platform which laid the basis for the industrialization of the Northern United States. In future years, the system would serve as a critical supply line in the Union’s Civil War victory.

When the Erie Canal opened, there was a huge celebration which began on October 26 in Buffalo, and ended in New York City on November 9, 1825. Governor Clinton and other dignitaries rode a flotilla of boats along the canal route. There were toasts, speeches, poems, and musical tributes in every town along the way. Cannon were placed along the whole route from Buffalo to Albany, and down the Hudson to New York, 10 miles apart. Each cannon fired in succession, and it took 80 minutes each way, the fastest communication ever up to that time!

Thus, America had built the longest canal, in the least time, with the least expense, to the greatest public benefit, opening the gateway for the Western Expansion of the United States and inspiring entire generations. Similarly, the space program, its Artemis missions, and Mars exploration missions today, represent a similar platform building program toward prosperity here on earth.