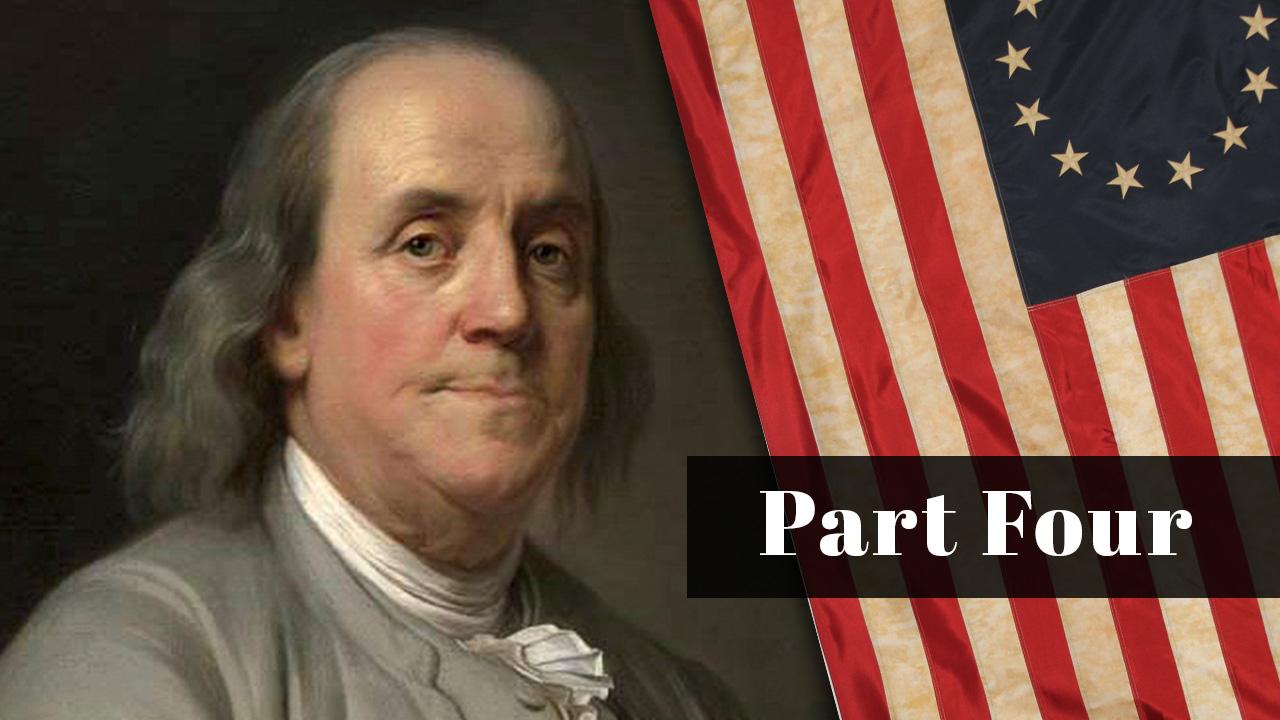 As the month of December unfolds, we American patriots must steel ourselves for the fight required in the days ahead—and the actions that must be taken to secure victory. Here, as a lesson to guide us, we present Benjamin Franklin’s leadership in the days leading up to American Independence. What is written below is not just history. Consider our situation today. Are we to be ground into the dust by a modern-day British Empire? To live under the diktats of a near-hereditary global oligarchy, who actually govern from Davos, the City of London, Silicon Valley and various agencies of the United Nations,—who then dictate policy to national governments? Are we destined to be the slaves and serfs of a self-appointed global elite?

By late 1775, although events were propelling the colonies into open warfare, many—both within the population and the Continental Congress itself—were gripped by indecision, almost paralyzed by fear. British troops tramped across American soil; British warships patrolled the coast; and the Crown demanded that the colonies submit to royal authority.

The schizophrenia in the Congress was so acute that on July 6 the Congress issued a “Declaration of the Causes and Necessity of Taking Up Arms,” a resolution explaining why the 13 Colonies had resorted to armed defense; but this was followed two days later by the issuance of the “Olive Branch Petition,” affirming American loyalty to Great Britain, blaming the crisis on Parliament and government ministers, and beseeching—almost begging—King George III to come to the colonies’ rescue.

Into this crisis, Franklin stepped forward. He would be the lightning rod, through which others would be led to act upon the future.

Earlier, in September, 1774, while still in London, Franklin had been introduced to Tom Paine by a fellow member of the Royal Society. Franklin took a liking to Paine, urged him to emigrate to America and supplied him with a letter of introduction to his son-in-law, the printer Richard Bache. On Nov. 30, 1774, Paine arrived in Philadelphia. Through Bache, Paine met Robert Aitken, who enlisted his help in producing a new magazine, to which Paine began contributing articles.

In December, 1775 Paine began work on a piece that eventually would be named Common Sense. During the writing of the work he was in constant consultation with Ben Franklin, and before publishing the finished work, Paine submitted the manuscript to Franklin who made several revisions and strongly endorsed the finished work.

Common Sense was published in Philadelphia on January 10, 1776. It created a sensation. Paine’s message was uncompromising: “Every thing that is right or natural pleads for separation. The blood of the slain, the weeping voice of nature cries, ‘Tis time to part’.”

Within 3 months an astonishing 120,000 copies were sold, and by the end of the war 500,000 copies had been sold, this at a time when there were only two million residents of the 13 colonies. Since the work was published anonymously, many thought that Franklin was the author, for it was written in his “plain” style, and reflected his public sentiments about Britain and the monarchy.

Common Sense galvanized the forces favoring complete independence. It was read in homes, in taverns, in coffee houses, in political and church chambers. It was discussed everywhere. It transformed the political dynamic throughout the colonies virtually overnight. Colonial legislatures, which had prohibited their delegates to Congress to support independence, now withdrew those prohibitions, and in some cases authorized the delegates to support independence.

“The sun never shined on a cause of greater worth. ’Tis not the affair of a city, a country, a province, or a kingdom, but of a continent... ’Tis not the concern of a day, a year, or an age; posterity are virtually involved in the contest, and will be more or less affected, even to the end of time, by the proceedings now. Now is the seed time of continental union, faith and honor...

“Though I would carefully avoid giving unnecessary offence, yet I am inclined to believe, that all those who espouse the doctrine of reconciliation, may be included within the following descriptions. Interested men, who are not to be trusted; weak men, who cannot see; prejudiced men, who will not see; and a certain set of moderate men, who think better of the European world than it deserves...

“The present winter is worth an age if rightly employed, but if lost or neglected, the whole continent will partake of the misfortune; and there is no punishment which that man will not deserve, be he who, or what, or where he will, that may be the means of sacrificing a season so precious and useful...

“The time hath found us. The general concurrence, the glorious union of all things prove the fact. It is not in numbers, but in unity, that our great strength lies.”

In addition to his argument for full independence, Paine’s other major theme of Common Sense is that America can not be ruled by monarchical government. To be free, to create a productive future required that America must become a republic. Paine eviscerates monarchies and hereditary rule as an abomination. He says, “there is no natural or religious reason for the distinction of men into kings and subjects. Of more worth is one honest man to society and in the sight of God, than all the crowned ruffians that ever lived.”

By the spring of 1776 the situation within the Congress was explosive. On June 11, Congress appointed a “Committee of Five” to draft a declaration justifying the decision for independence. Appointed to the committee were Benjamin Franklin, Thomas Jefferson, John Adams, Roger Sherman and Robert Livingston.

Jefferson was chosen to write the first rough draft. Franklin was happy to leave the task to another. He was still bedridden, suffering the after-effects of his journey to Quebec. Months earlier, Franklin had produced his own draft of a Declaration of Independence, which he had circulated to a number of friends. One section read,

“Whereas, whenever kings, instead of protecting the lives and properties of their subjects, as is their bounden duty, do endeavor to perpetrate the destruction of either, they thereby cease to be kings, become tyrants, and dissolve all ties of allegiance between themselves and their people; we hereby further solemnly declare, that whenever it shall appear clearly to us, that the King’s troops and ships now in America, or hereafter to be brought there, do, by his Majesty’s orders, destroy any town or the inhabitants of any town or place in America... we will from that time renounce all allegiance to Great Britain, so long as that kingdom shall submit to him, or any of his descendants, as its sovereign.”

Jefferson spent days working on his draft, during which time he consulted Franklin’s earlier work. As he completed sections, he sent them to Franklin’s home, with a note reading, “Will Doctor Franklin be so good as to peruse it and suggest such alterations as his more enlarged view of the subject will dictate?” The full extent of Franklin’s changes to the document will never be known, but some markings on it show that minimally he strengthened the language, e.g. replacing “reduce them to arbitrary power” with “reduce them under absolute despotism.” He also made one change which altered fundamentally the intention of the Declaration. Where Jefferson had written “We hold these truths to be sacred and undeniable,” Franklin crossed this out with heavy slashes and wrote, “We hold these truths to be self-evident.”

When the final version of the Declaration was presented to the Congress on June 28, nine colonies voted to approve it. Pennsylvania and South Carolina voted against it, New York abstained (because its delegates had not yet been authorized by the New York legislature to vote for independence), and the Delaware delegation was split. In Pennsylvania, the legislature had instructed its delegates to “utterly reject” any actions “that may cause or lead to a separation from our Mother Country.” In response, Franklin organized a rump state legislature, which then endorsed independence. After four days of furious discussion in the Congress,—with Franklin in attendance and pressing the case—on July 2, all but New York had declared for independence. Shortly afterward news reached Philadelphia that the New York legislature had given its go-ahead, and the decision was made unanimous. The final wording of the Declaration of Independence was approved on July 4, 1776 and sent to the printer for publication.

At the official signing of the Declaration, John Hancock stated, “There must be no pulling different ways. We must all hang together.” Franklin replied: “Yes, we must, indeed, all hang together, or most assuredly we shall all hang separately.”

Into the Breach Once More

In early September, 1776 Franklin received a private communication from Admiral Richard Howe, the commander of the British fleet in America, inviting him and other delegates of the Continental Congress to a “peace parley” on Staten Island. At that meeting Howe delivered a personal message from King George. If the colonists would lay down arms and accept the sovereignty of the King, the British would agree to all of the colonists' demands. All taxes on the colonies would be eliminated; all British troops would be removed; and the colonial governments would be given basic autonomy. Essentially, what was offered was a return to the status quo of 1763.

Franklin's reply was short and final: ‘It's too late’. Despite the string of American military defeats since the Battle of Brooklyn and the dire straits of the revolutionary effort, Franklin replied that America was now a free and independent nation. There was no going back.

At about this time, Franklin received a letter from one of his friends in France. The letter hinted that the French government was in sympathy with the Americans, and that, if it could be done secretly, they might be willing to send the Americans money, powder, cannon and muskets.

Within two weeks of receiving this letter, Franklin was chosen unanimously by a Congressional Committee to head a delegation to France. John Adams and Thomas Jefferson both declined nomination to Franklin’s commission, but Franklin had made his irrevocable decision that America must be free. He wrote to Benjamin Rush, “I have only a few years to live, and I am resolved to devote them to the work that my fellow citizens deem proper for me... You shall have me for what you please.”

On the 26th of October, 1776, he left Philadelphia, but before doing so he collected all the money he could command, about twelve thousand dollars, and loaned it to the government. He had been in America only 17 months.

Upon Franklin’s arrival in Paris, Silas Deane proclaimed, “Here is the hero and philosopher, and patriot, all united in this celebrated American, who, at the age of seventy four, risks all dangers for his country.”