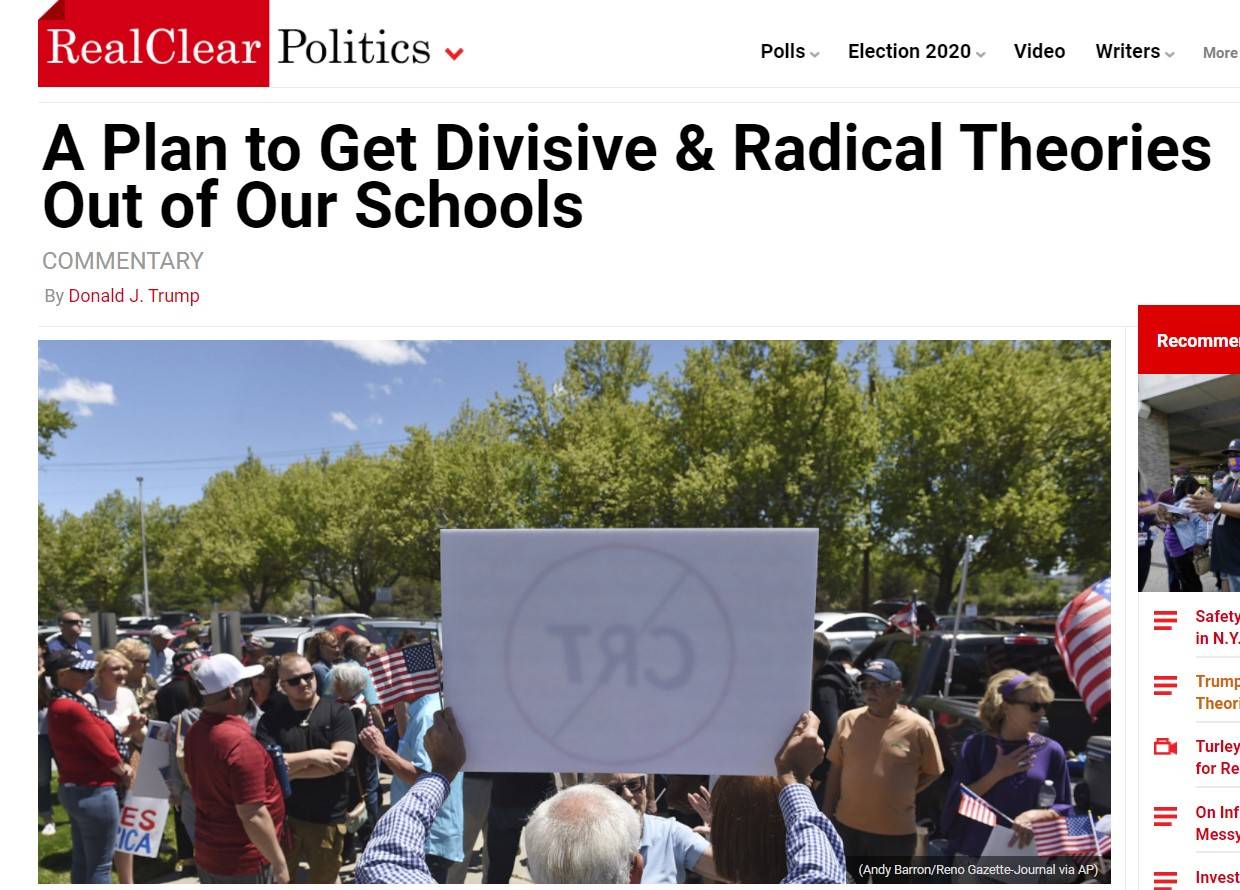 President Trump issued a highly significant broadside and call to action against Critical Race Theory (CRT) on Real Clear Politics June 18. It is must reading for any patriot fighting to save the country.

He entitled the commentary, “A Plan to Get Divisive and Radical Theories Out of Our Schools.” Already, the President’s opponents are fulminating, rug chewing, and engaged in various forms of fits. For example, Forbes Magazine seeks to paint Trump’s commentary as a direct attack on Juneteenth, rightly declared a new national holiday by Joe Biden on June 17 as the result of a bi-partisan bill which overwhelmingly passed the Congress.

The wacko pundits, as usual, get it wrong. President Trump had initiated making Juneteenth a national holiday under his Platinum Plan for Black America. Now, eliminating the destructive teaching of CRT in the nation’s schools has become the cause of a generation for thousands of parents mobilized throughout the United Sates. As President Trump re-emerges on the national scene this month with a visit to the border and rallies in Cleveland and Tampa, this commentary and its placement make it clear that he is intent on presenting a vision for the future diametrically opposed to the destruction of this nation undertaken by Joe Biden and his collective at the behest of the modern British Empire.

The President’s commentary opens strong: “Instead of helping young people discover that America is the greatest, most tolerant, and most generous nation in history, it teaches them that America is systemically evil and that the hearts of our people are full of hatred and malice. Far from advancing the beautiful dream of the Rev. Martin Luther King, Jr.—that our children should ‘not be judged by the color of their skin, but by the content of their character’—the left’s vile new theory preaches that judging people by the color of their skin is actually a good idea. Teaching even one child these divisive messages would verge on psychological abuse. Indoctrinating generations of children with these extreme ideas is not just immoral—it is a program for national suicide.”

At the center of Trump’s critique is a rule proposed by Biden’s Department of Education regarding “proposed priorities in American history and civics education.” https://www.federalregister.gov/documents/2021/04/19/2021-08068/proposed-priorities-american-history-and-civics-education Related “civics” and “history” legislative proposals in Congress, such as the Civics Secures Democracy Act, would allocate $1 billon to teaching this poison nationally. https://www.city-journal.org/critical-race-theory-in-civics-education On his first day as the hologram President, Biden had rescinded Trump executive orders barring the teaching of CRT and setting up the 1776 Commission to ensure that Americans received a competent understanding of their own history.

In his call to action, President Trump continues: “The [Department of Education] rule explicitly cites the New York Times discredited ‘1619 Project ‘ as a motivation. The Times has described the goal of its endeavor as the ‘re-education’ of the American people, and the project even includes a lesson plan that encourages students to practice ‘erasing’ parts of the Declaration of Independence. The Biden rule also directly cites a left-wing activist and leading proponent of critical race theory whose textbook states, ‘The only remedy to past discrimination is present discrimination. The only remedy to present discrimination is future discrimination.’”

The left-wing activist described by President Trump is Ibram X Kendi, author of the book “How to Be an Antiracist.” Kendi’s book is not only in the Department of Education’s rule, it is required reading for the entire Navy. The chilling June 16 exchange between the current Chief of Naval Operations, Admiral Mike Gilday, and Representative Jim Banks (R-IN) concerning Kendi’s book indicates just what President Trump is referring to when he calls CRT a program for national suicide. You can watch it here. https://www.youtube.com/watch?v=MMfDlNX2_VM&t=35s

President Trump’s commentary presents a five-point action plan. First, all states and the Congress should ban CRT. Five states—Idaho, Oklahoma, Texas, Iowa, and Tennessee—have passed legislation to date and legislation is pending in 22 other states. Most significantly, he proposes that each state create its own 1776 Commission to ensure that students are grounded in actual American history.

President Trump also proposes that parents must have total access to what their children are being taught, with all teaching materials made available and with students granted the right to record what teachers are saying. He calls on parents to organize locally—“in every school district in America”—to eliminate “Action Civics” and similar efforts to turn traditional civics into a program for “left-wing indoctrination.” He attacks Congress’ $1 billion Civics Secures Democracy Act by name. Finally, he calls for automatic vouchers to be given to any parent who objects to the curriculum in a public school, allowing them to place their child in a school of their choosing.

The missing element which LaRouche PAC would add to this plan—a vital and absolutely critical element—is teaching children about America’s war with the British Empire. It was the Empire which imposed slavery on America, a practice prominent in all imperial regimes. https://www.larouchepac.com/_we_hold_these_truths_to_be_self_evident The Empire never accepted the American Revolution. It has fought a continuous war to reimpose its ideologies on this country and to erase the actual principles of our history. The very same Empire conducted the coup against the Trump presidency. It is the same Empire, now marching under the flag of the Great Reset, the Green New Deal, and Equity, to whom Joe Biden owes allegiance and which seeks the final destruction of the United States.

Currently, LaRouche PAC’s Robert Ingraham is presenting critical lessons from Abraham Lincoln for winning the nation back. Lincoln, acting on thousands of years of republican history, founded the Republican Party, basing its program explicitly and solely on the principles of the Declaration of Independence. We are hopeful that this crucial material will be incorporated into the States’ 1776 Commissions’ recommendations concerning curriculum. You can find it here. Civics Secures Democracy Act https://www.larouchepac.com/american_patriot