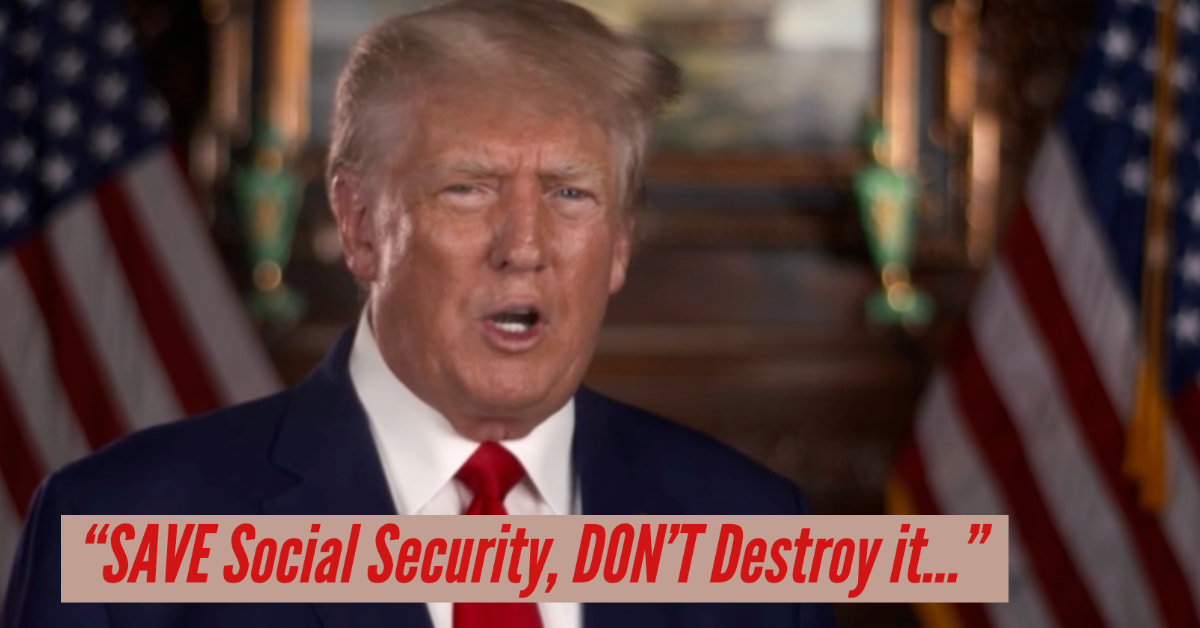 On Friday President Trump issued a strong warning to all Republicans not to cut Social Security or Medicare in the context of the ongoing fight over the debt ceiling. In doing so, Trump escalated the fight against the Bush Republicans (Bushies[1]) who have made common cause with Biden-Obama Democrats to continue the bailouts of Wall Street and the City of London at the expense of America’s sovereignty, economy, and the living standards of the American people.

Though Biden and his allies have falsely portrayed the fight over the debt ceiling as a choice between avoiding default or Republican efforts to cut Social Security, Medicare, and other mislabeled “entitlements,” nothing could be further from the truth. First, it is only the Bushies in the Republican party who want to join with the Democrats to loot Social Security and Medicare. (Remember George W. Bush’s failed efforts to privatize social security in 2005 as a scheme to give Wall Street and London a huge shot of liquidity). President Trump spoke for most of the MAGA Republicans in his denunciation of these Bush-family plans.

Second, the debt ceiling crisis is not a government budget crisis. President Trump made this clear in his message.  Other MAGA supporters, such as his former OMB director Russ Vought, have provided the details. There are many ways to avoid any crisis and trigger economic growth, starting with ending the funding for the war in Ukraine and reversing many of the anti-growth regulatory and spending measures put in by Biden and the Democratic controlled Congress with the help of Bushies. FY2023 Budget | Issue Topics | The Center for Renewing America (americarenewing.com)

In reality, the debt ceiling crisis is a showdown with Wall Street and London, who must continue looting the U.S. economy to survive. That pillage is facilitated by the Federal Reserve, the Bushies, and the Wall Street Democrats. Since at least the 2000 dot-com bubble, and especially after the 2008 financial crisis, the Federal Reserve has provided unlimited amounts of free money to Wall Street and London to inflate financial assets—leading to what is now called the “everything bubble.” The resulting current outbreak of inflation in the real economy has the American people paying this bill.  The sharks who created the crisis intend to emerge with their proceeds intact. Most important, the green/woke policies of the Davos elite, being implemented by the Biden/Obama Democrats with the help of their Bushie allies, have crippled the productive capacity of the U.S. economy.  Yet, restoring physical productivity in the real economy is the only way to escape the economic vise which is now suffocating us.

We have to go back to and expand the policies started under the Trump administration to build up the economy’s productive sector. That means, for example, expansion of energy production, including fossil fuels, nuclear and fusion power, and streamlining regulations to favor rapid increases in physical production and other traditional American System measures. Most importantly, it means getting rid of the Federal Reserve in its current form, and replacing it with a National Bank solely dedicated to investment in modern infrastructure, frontier research and development led by fusion energy and space exploration, and generalized technological progress –the original concept for national banking pioneered by Alexander Hamilton.

LaRouche PAC will continue to report on the truth of this situation and provide clear measures that the MAGA/Trump Americans can rally behind.

[1] Bushies is the more correct term than the meaningless term “RINO,” as all the pro-globalist opponents of the MAGA movement in the Republican party, like Ron DeSantis, et al are really epigones of the treasonous Bush family.