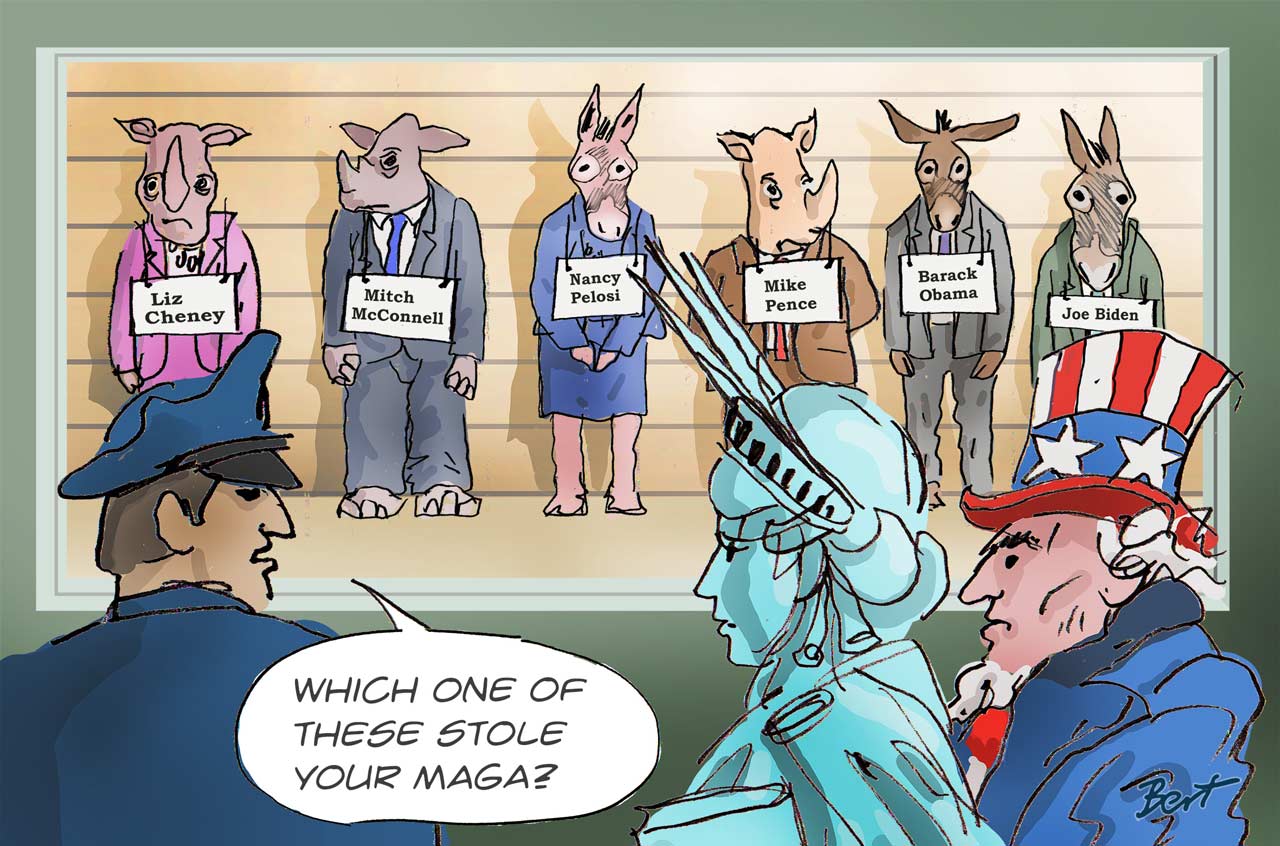 No Republican will receive our support in the 2022 midterms unless they declare their support for the policies stated in this petition and for Donald J. Trump.

Update #1: Petition is published by LaRouchePAC on July 11, 2022. LaRouchePAC respects your privacy, and your signature will not be shared with any 3rd parties. We'll keep you updated on the status of the petition on this page.

In July of 2022, the Midterms approach, and Washington’s Uniparty is even more desperate to destroy Donald Trump and remove him from the political landscape. They are also trying to brainwash the public into believing that the 2020 election was fair and legitimate. As the economy collapses all around us, Washington’s Republicans shout and rage against the catastrophe which is the Biden Administration, while proposing absolutely nothing which will stem the collapse and put the nation on the road to recovery and sustained economic prosperity.

We now need to create and empower a Republican Party in the mode of Alexander Hamilton and Abraham Lincoln, making our nation sovereign and economically self-sufficient again.  This can only be accomplished if we reclaim our place as the world’s foremost industrial and scientific power, defeating the globalists in the process. This is what Donald Trump forcefully advocated in 2016 and thereafter.

This petition will be delivered to the Republican Senatorial Committee, the Republican Congressional Committee, and Republican state committees, as an expression of where the voters, rather than the megabucks contributors, stand with respect to the 2022 Midterm Elections. Signing and supporting it in massive numbers is meant to deliver a body-blow to Washington’s Uniparty establishment.

Now, we the undersigned hereby state and declare as follows:

(1). The January 6 investigation by a Committee of Congress, led by Liz Cheney and the United States Department of Justice—both operating completely outside established norms and laws—have just one central objective: the indictment of Donald J. Trump, his removal from U.S. political life, and the demoralization and neutralization of those who support him.  They also seek popular acquiescence in the lie that the 2020 Presidential election was fair and legitimate.  A similar rogue inquisition, with the same objectives, is being conducted by Fran T. Willis, the District Attorney of Fulton County, Georgia.

(2). These investigations are a continuation of the criminal conspiracy and coup run against the 45th President and his supporters by the National Security State, in conjunction with the Democratic Party and the Republican Party establishment—from the moment he announced his candidacy.

No Republican will receive our support in the 2022 Midterms, unless they dedicate themselves to investigating and fully prosecuting this coup and its participants in its entirety, (inclusive of the conduct of the 2020 presidential election and the provoked riot which occurred on January 6, 2021).

(3). In their pursuit of absolute power, the conspirators and their foreign supporters in the globalist elite imperium have delegitimized our Constitution and destroyed its central concepts of equal justice, due process under the law, and freedom of thought and speech, among other unalienable rights.

(4). The same forces are destroying our nation through social and economic policies of deliberate chaos and destruction. These include unbridled open borders; unimpeded distribution of killer drugs such as Fentanyl; rampant crime and unchecked violence in our major cities; the destruction of fossil fuel and other modern energy sources for the economy; and a wholesale commitment to war against Russia, using the nation of Ukraine as a proxy—a war which could readily destroy the entire human race. While the Republican establishment rages about some of these issues to procure votes, they fail to propose solutions and are fully on board with the Ukraine war.

No Republican will receive our support in the 2022 Midterms unless they present concrete and viable proposals to reverse each of these policies, centered in a singular focus on developing the economy of the United States on a modern infrastructure platform, and developing and educating its labor force.

(5). During his 2016 campaign and thereafter, Donald Trump sought to reclaim America’s sovereignty by withdrawing from the Paris Climate Accord and similar globalist mandates, and rebuilding the nation as the world’s premier self-sufficient industrial and scientific power. He invoked the American System of political economy of Hamilton, Lincoln, and Clay by name, and the 2016 Republican platform called for the reimplementation of Glass-Steagall to end financier looting of the physical economy and the nation’s working and middle classes.

(6). These ideas and Donald Trump’s commitment to them (bitterly opposed by official Washington and its globalist masters), rather than “Trump’s personality,” are the only reason he is hated and violently resisted by our radical elites. To think otherwise is a self-consoling delusion meant to justify moral cowardice. These ideas and this mission are the keys to this nation’s survival and future prosperity. They require ending the Federal Reserve and returning to the national banking policies of Hamilton and Lincoln, to support continuous progress in developing our economy for ourselves and our posterity.

No Republican will receive our support in the 2022 midterms unless they declare their support for these policies and for Donald J. Trump.