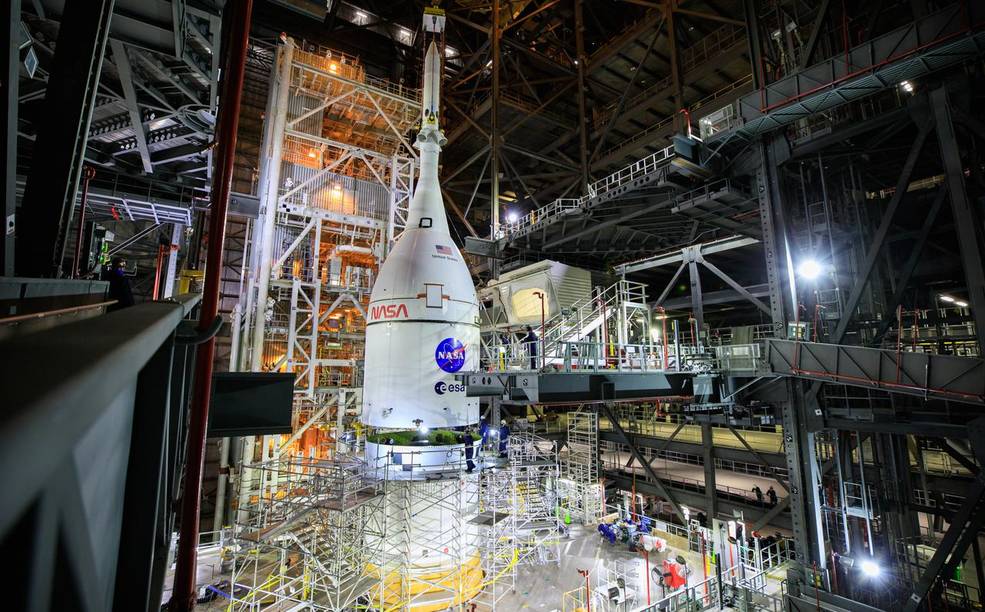 The Orion spacecraft for NASA’s Artemis I mission, fully assembled with its launch abort system, is lifted above the Space Launch System (SLS) rocket in High Bay 3 of the Vehicle Assembly Building at Kennedy Space Center in Florida. 11/16/22

Or, Is This More Kamala Harris and Climate Crazy Sabotage?

In October 2021, I reported on the successful stacking of the Orion Spacecraft atop the 322 foot tall Space Launch System (SLS) rocket in the Vehicle Assembly Building (VAB) at the Kennedy Space Center. The completed vehicle was scheduled to undergo testing in the VAB before it was rolled out to Launch Complex 39B for the late February 2022 Artemis 1 mission around the Moon. The launch had already been pushed back from the previously scheduled late 2021 launch date.

NASA announced that the Artemis 1 flight has been once again delayed and may not be rolled out onto the launch pad until, at earliest, sometime in March. On Wednesday, February 2, NASA held a press conference on addressing the delays. Mike Bolger, program manager of exploration ground systems at NASA's Kennedy Space Center, told Space.com, "Ultimately, we're going to launch this flight hardware when the flight hardware is ready and when the team's ready."

It was announced that the team is not working on any major issues, and that NASA had added additional time to complete closeout activities. It was reported that there was no significant reason that caused the delay, but Tom Whitmeyer, deputy assistant administrator for exploration systems development at NASA Headquarters said, "logistically it's a very difficult thing."

As I have previously reported, Artemis is suffering from slow sabotage based on the re-definition of NASA’s mission to climate “science,” shorting manned space exploration and colonization, and the assignment of the portfolio to the failing Vice-President and stoner, Kamala Harris.  She thinks she is thrilling children when she tells them that the mission of Artemis is to “see the moon with your own eyes.”

President Kennedy gave his now famously known "Moon Speech" at Rice stadium on September 12, 1962, where he declared, " We choose to go to the moon. We choose to go to the moon in this decade and do the other things, not because they are easy, but because they are hard, because that goal will serve to organize and measure the best of our energies and skills, because that challenge is one we are willing to accept, one we are unwilling to postpone, and one which we intend to win, and the others too."

What we are discussing here is not just another delay, these delays have enormous impact. The Artemis Program initiated under President Donald Trump in 2017, outlined a bold vision to return American Astronauts, with the help of international and commercial partners, to the Moon, for the first time since 1972—the last time Americans set foot on the Moon. Artemis is critically important to advancing a science driver program to increase the productivity of our nation's economy and cooperation among nations to promote human progress in space.

Once rolled out onto Launch pad 39B, the next step will be a wet dress rehearsal that will simulate every step of the launch, except the launch itself. It has not been fully determined yet when the Artemis1 mission will be launched, possibly sometime in April or May. Once Artemis1 is launched, it will be the first uncrewed test flight of NASA's deep space exploration missions. The plan was for Artemis1 to travel 280,000 miles from earth over the course of a three week mission. The fully assembled vehicle also consists of a structure housing 10 cubesat rideshare payloads.  The Artemis1 mission will be followed by Artemis 2, which will consist of a crewed mission around the moon. Four astronauts are scheduled to be announced sometime later this year. It has been revealed that one of the four astronauts to fly on the crew will be a Canadian. The third mission will land a crew at the Lunar South Pole originally scheduled for 2024 under President Trump. In 2022, the United States is one of several nations with plans to set a course to the South Pole of the Moon, to build out lunar settlements, and pave the way for future missions for eventually settling  Mars.  This is the beacon of hope both for this fractured nation and all of humanity.

Was this a decision by the engineers? We must be meticulous in ensuring that the mission works and does not fail, particularly in an environment where Washington’s saboteurs are rooting for failure.  Similarly with protecting human lives.  If the engineers made the decision on this basis I have no problem with it.  If it was otherwise, then the saboteurs have to be publicly exposed.