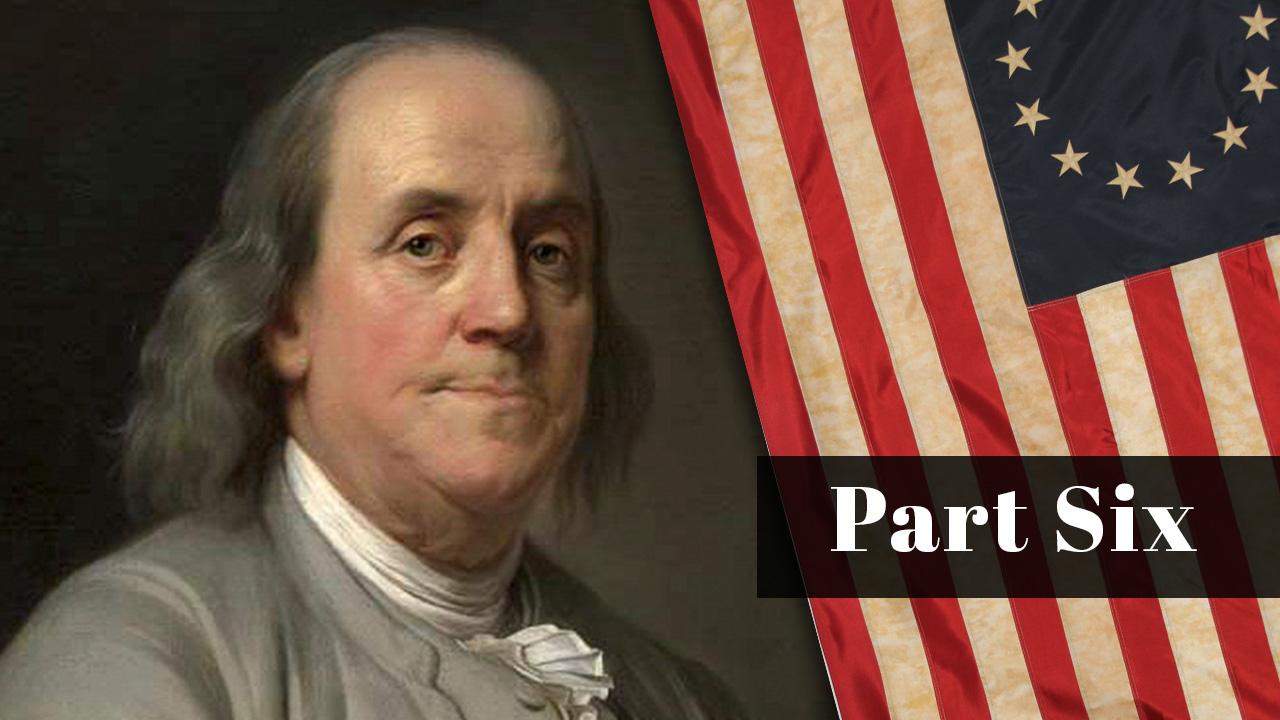 “Call it the idea of freedom achieved through the creation and defense of government of the people, by the people, and for the people. Call it the determination that such political creations shall prosper, and be defended at any price necessary, that such 'democracy' not perish from the earth.”
– Lyndon LaRouche, “The Impact of the American Ideology upon the Failures of U.S. Strategy,” 1988

But what is the highest conception of patriotism? What is it that will bring about revolutionary change through courageous action? It is not simple loyalty to a geographical entity known as a “nation,” nor even to the existing government of that nation. Rather, as with the case of the Declaration of Independence and the U.S. Constitution, it is the willingness to sacrifice all in defense of universal and truthful principles.

That is the character of our battle today,—a principled fight to rescue the American Republic, a republic—as Lyndon LaRouche asserts—“to be defended at any price necessary.”

In this installment on the life of Benjamin Franklin we examine Franklin’s activities in Paris from 1777 to 1785. Almost single-handedly Franklin battled for the sovereignty of America—the moral purpose and mission of America—against the most powerful empires on the planet. His achievement is staggering, and it provides a lesson for all of us today.

The Alliance with France

In the winter of 1776-1777 the situation in America was beyond desperate, and it was recognized by many in the Continental Congress that the Revolution was doomed without French military and economic assistance. Benjamin Franklin was chosen to go to Paris to secure French aid. Arriving in Paris on December 21, 1776, he would remain in France for 8 ½ years, during which time he organized and brought to successful conclusion the three most important treaties of the Revolutionary War: the Treaty of Amity and Commerce between America and France, the Treaty of Alliance with France (both 1778), and the Treaty of Paris (1783), which ended the Revolutionary War.

Franklin arrived in Paris as a world-renowned figure. One French observer reported,

“The celebrated Franklin arrived at Paris the 21st of December and has fixed the eyes of every one upon his slightest proceeding... He was not given the title Monsieur; he was addressed simply as Doctor Franklin, as one would have addressed Plato or Socrates. If it is true that Prometheus was only a man, may one not believe that he was a natural philosopher like Franklin?”

Franklin’s arrival led to an outpouring of enthusiastic young men, who were drawn to the cause of republican liberty. The Marquis de Lafayette was the most famous example of this. This ardent pro-American sentiment, which Franklin personified, is explicit in his 1777 letter to the Committee of Secret Correspondence in Philadelphia:

“Tyranny is so generally established in the rest of the world that the prospect of an asylum in America for those who love liberty gives general joy, and our cause is esteemed the cause of all mankind. Slaves naturally become base as well as wretched. We are fighting for the dignity and happiness of human nature. Glorious it is for the Americans to be called by Providence to this post of honour. Cursed and detested will everyone be that deserts or betrays it.”

Yet, despite Franklin’s personal prestige, none of the oligarchical and aristocratic rulers of Europe were sympathetic to the American cause. The blood-thirsty British would use whatever cruel and inhuman means necessary to crush the rebellion. The French monarchy, as well as the governments of other nations such as Spain and the Netherlands,—nations whose help America desperately required—cynically viewed America as a mere pawn, to be used in a geopolitical chess game against the British. Not one of the European powers desired to see America emerge from the war as a strong independent sovereign nation.

From the beginning, the French throne made it explicit, particularly prior to the American victory at Saratoga, that they were willing to provide a trickle of aid,—to “irritate” the British—but that no serious commitment would be made unless the Americans proved themselves to be a serious military threat to the British army. For 18 months Franklin worked tirelessly to secure loans, supplies and arms, often under very difficult conditions.

The British surrender at Saratoga, on October 17, 1777, changed everything. French Foreign Minister Vergennes let it be known that the French were now willing to discuss an official alliance. The Treaty of Amity and Commerce was signed on February 6, 1778 and the Treaty of Alliance the very next day.

With French military and economic backing secured, Franklin then turned his attention toward securing the eventual peace. His actions, still today, present a master class in grand strategy. For four years he played the French and British off against one another. He understood that the American cause was based on principle, but that the European oligarchies were driven by bestial appetites and geopolitical intentions, absent all morality. He would use his insights into the mind of the enemy to mislead both and achieve victory.

Immediately following the Battle of Saratoga, the British sent their premier spymaster Paul Wentworth to Paris to offer terms to Franklin for reconciliation between Britain and America, based on the promise of autonomous self-rule. Franklin leaked the proposal to members of the French government, with hints that America might reach a pact with Britain if the French delayed in signing a treaty of alliance. Within days Vergennes’s secretary personally visited Franklin and asked, “What is necessary to be done to give such satisfaction to the American commissioners as to engage them not to listen to any proposition from England for a new connection with that country?”

Following the surrender of Gen. Cornwallis at Yorktown on October 19, 1781, the end of the war was in sight, and with the resignation of Lord North’s government in March, 1782, negotiations for peace began in earnest.

Once again, Franklin knew that France’s war aims were not the same as America’s. In fact, although the bitterest of enemies, France and Britain were in agreement that an independent America should be kept weak, geographically limited and dependent on Europe. As late as September 6, 1782, Vergennes had issued a memo stating that in any peace agreement Britain should retain Canada, as well as all the territory north of the Ohio River, while Spain was given Florida and all the territory south of the Ohio River, thus restricting an “independent” America to the original 13 colonies, with the Adirondack Mountains as their western boundary. What France wanted from a peace treaty was access to the British fisheries off Newfoundland (which they proposed to deny to America) as well as the cession of several British possessions in the West Indies to France.

In navigating this minefield between competing oligarchies, Franklin’s intention is best expressed in a private letter he sent on June 28, 1782:

“We have no safety but in our independence; with that we shall be respected, and soon become great and happy. Without it, we shall be despised, lose our friends, and then either be cruelly oppressed by the king, who hates, and is incapable of forgiving us, or, having all that nation’s enemies for ours, shall sink with it.”

In the spring of 1782, the British sent two separate envoys to meet with Franklin—Richard Oswald and George Grenville. Then began a series of feints, subterfuges and thrusts on Franklin’s part, playing the two envoys against each other, as well as against Vergennes. With the French, Franklin kept them mostly in the dark, only dropping the occasional remark that unless France backed the Americans, he might negotiate a rapprochement with London. With the British he took a confrontational stance, demanding recognition of Independence, war reparations, the cession of Canada, fishing rights and the Mississippi River as the western boundary. In the back and forth which followed, the implicit—and sometimes explicit—threat was that America would form permanent agreements with France if Britain did not acquiesce to Franklin’s demands.

In the end, with the sole exception of obtaining Canada, the British agreed to all of Franklin’s demands—what he called his non-negotiable “necessary” conditions for peace. This was all Franklin’s doing. He had been aided by Silas Deane in 1777-78 and later by John Jay in the second half of 1782, but the truth is that for eight years Franklin had been organizing and conspiring to secure a peace which would recognize the independence and security of America. During the eight months following Yorktown it was Franklin alone who seduced the two most powerful empires in the world to compete for America’s affections. By the time John Jay arrived in Paris in June, 1782, most of Franklin’s work was complete. When Franklin was confined to bed by illness in July and August, Jay took over as lead negotiator, but this was done with day-to-day close consultation with Franklin. When John Adams arrived in October, his role was to merely sign the final treaty.

As Franklin had demanded, the opening line of the treaty declared the United States “to be free, sovereign and independent.”

When Vergennes read the peace treaty, he was amazed, stating, “Britain’s concessions, in fact, as much as to the boundaries as to the fisheries as to the loyalists, exceed all that I should have thought possible.”

Franklin understood that he was not simply negotiating a treaty between nations. What was at stake was the survival of the intention of the Revolution itself, of the new principles which defined a culture free from oligarchical rule. What needed to be secured was the continued sovereign existence of that mission for future generations.

In a 1777 letter from Paris to Samuel Cooper, Franklin wrote:

“All Europe is on our side of the question, as far as applause and good wishes can carry them. Those who live under arbitrary power do nevertheless approve of liberty, and wish for it; they almost despair of recovering it in Europe...”

So today, we have been called by Providence to defend the continuation of that Revolution and the divine intention which steered it.