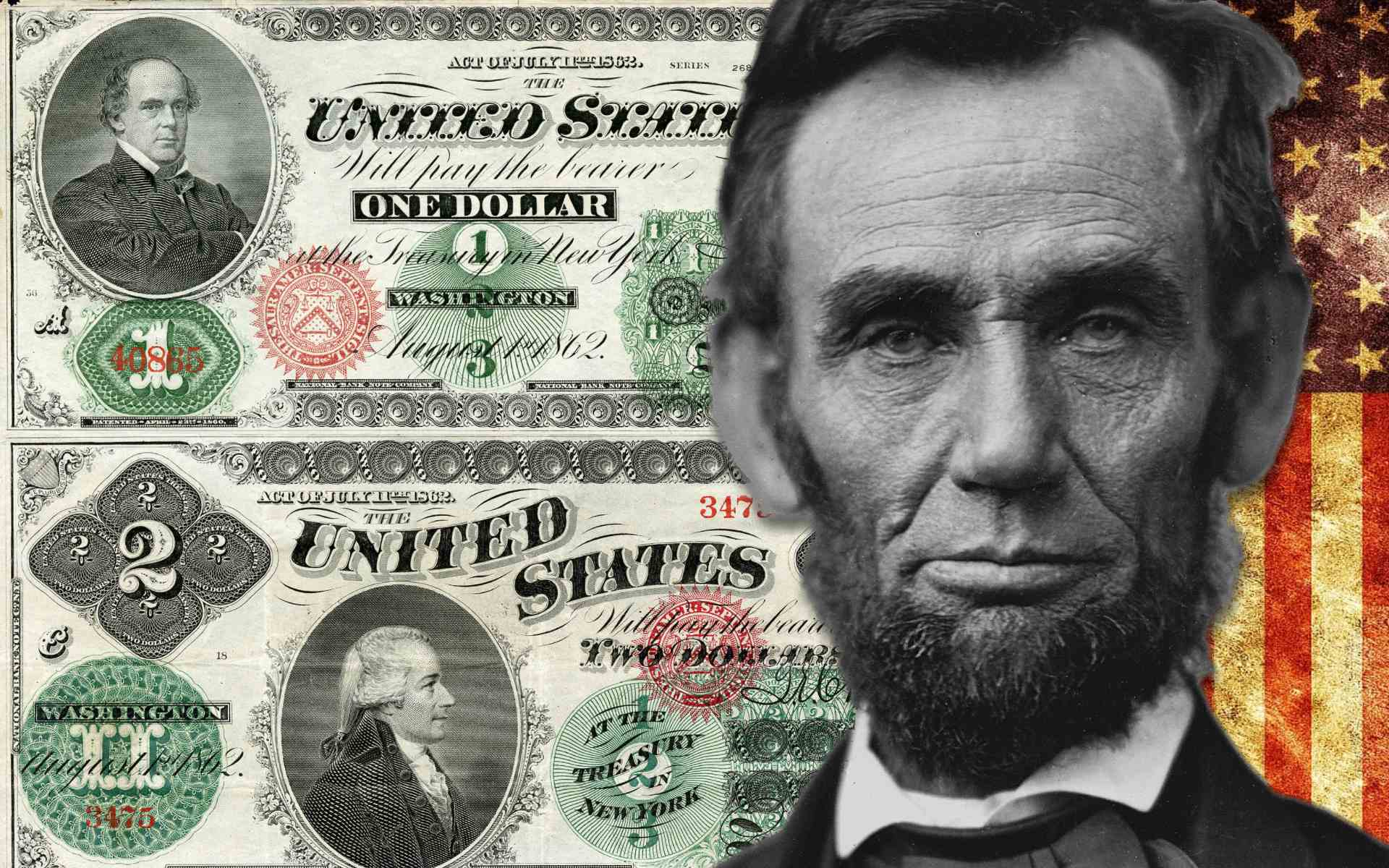 It was a perfect trap.  At the time, gold and silver coins (also known as specie), whose values derived from the value of their metallic contents rather than markings of denomination, were money.  As lightweight substitutes, and for convenience of circulation, local banks issued paper notes which were redeemable at the bank in gold or silver coins.  On December 28, 1861, despite the emergency caused by the Confederate rebellion, the Associated Banks of New York cut off specie transfers to the United States Government.  President Lincoln would not be allowed to secure the resources necessary to build economic and military forces powerful enough to preserve the Union.  It was just another example of the usual Imperial game in action:  governments are supposed to be subservient to the Imperial banking/monetary system.  Even back then, the British Empire (including its Wall Street arm) was primarily a financial racket.  President Lincoln and the American republic needed to learn their subservient place in the global British Imperial order.

But President Lincoln did not submit.  Lincoln’s dream of a better United States would not permit submission.  So, with access to money cut off, Lincoln and his team at the Treasury and in the Congress bypassed the Empire’s banks, and created a national paper currency, the “Greenbacks,” via the Legal Tender Act.  Thereby, Lincoln broke the Imperial stranglehold over scarce specie, not only to finance building the winning Union military and its revolutionary new equipment, but simultaneously to invest in the future productive power of the nation.  So, despite the losses of lives and property during the most destructive war in our history, Lincoln and his nationalist Congress created the National Banking system, set protective tariffs, began the transcontinental railroad, created the Department of Agriculture to spread scientific advances to farmers, and created the Land Grant college system, among other advances.

Over the following decades, Lincoln’s American model became the center of the international fight between those who would seek to uplift their people and develop strong national economies, against the British Empire's desire to wipe out all memory of such methods and maintain a “steady-state” world based upon enforced backwardness.  Even today, if you name any relatively developed nation, you can be sure that at some time in its history, its leadership applied measures which reflected in some way the ideas of Henry Carey and the Lincoln administration, in order to achieve some level of development—China, Russia, France, Germany and Japan are just the most outstanding examples.

Today as in 1861, the empire has set a trap.  Former Bank of England Governor and current United Nations special envoy for climate action and finance, Mark Carney, has created the Glasgow Financial Alliance for Net Zero--an alliance of all major private “Western” banks and financial institutions which pledge to cut off all credit to fossil fuel energy projects, in order to begin the restoration of the full British Imperial system worldwide.

However, we live in exciting times!  When the American people refused to submit to Imperial domination and elected Donald Trump President in 2016, President Trump moved to remove the United States from all of the Imperial agreements tied to the Empire’s fake news of “Anthropogenic” Climate Change.  He overturned the chessboard and ridiculed the globalist plot behind the attacks upon fossil fuels and economic growth.

President Trump’s actions opened a pathway for other nations to back away from the Great Trainwreck planned for the world economy.  However, even great powers like Russia and China still give lip-service to the Imperial goal of “carbon neutrality,” even as they shift their economies back into a growth mode tied to fossil fuel usage.

Among all world leaders in recent years, only President Trump had the courage to directly challenge the British Empire—as did President Lincoln.

Of course the Empire does not give up easily.  We saw the coup run to overturn President Trump’s reelection.  However, though the resultant clown-world Administration may employ the world’s most professional ballot stuffers, in all other endeavors the Administration is failing massively and is rapidly unifying the American people against it.  We saw that in the November 2021 elections.

In this conflict, the Empire has exposed itself as never before.  It has little left but the private “Western” banks, discredited lackey-politicians, and the psychological warfare capabilities of the mass media and “intelligence” services--all of which have been repeatedly exposed, discredited and mocked to general merriment.

What You Can Do

This situation offers us the opportunity to push through the measures outlined in the LaRouchePAC Resolution to Re-Americanize the Economy and finally crush the power of the Empire.  Unlike the situations during the administrations of Presidents Lincoln or Franklin Roosevelt, who each succeeded in outflanking the City of London/Wall Street arms of the Empire, today we have strong allies and potential allies who would be very happy to see a new Trump Administration take the next steps in finally freeing the world of the predatory Imperial speculative-financial system.  What are those next steps?

Let’s look at measure four in the LaRouchePAC Resolution to Re-Americanize the Economy: Taxation, financial and monetary regulation, and credit policies to accomplish these ends. What does that mean?  It means that we stop accepting the British Empire’s rules which have plundered this country and the world for centuries.  We will apply the lessons from the past to the changing circumstances of the future.

Today when you hear the word “credit,” you probably first think of credit cards issued by a private institution, which target usage for small and medium consumer purchases.  When we speak of a national credit policy we are speaking of something much bigger.  For example, look at measure two in our LaRouchePAC Resolution: Developing advanced infrastructure systems, starting with new energy, water, and transportation systems to increase the potential for productive private enterprise.  Here we are speaking about trillions of dollars in credit to be issued over time by a Congressionally established National Bank, to finance the building of thousands of viable giant projects over decades—as well as capital for development of industries, farms and local infrastructure.  Such credit is backed up by the value which will be created by both the process of building and the productive power of the final products—whether power systems, water systems, transportation systems, or factories and farms.  The amount of credit issued will only be bounded by the availability of people and capital equipment to carry out the projects.  We will not issue more credit than can be successfully put to work, and therefore repaid.

Without a National Bank to issue long-term low-interest loans, enterprises, entrepreneurs, farmers, states and cities have been forced to get capital on the Empire-controlled “markets.”  In a 2010 Bloomberg Opinion piece entitled “How to Make an American Job” [https://www.citizenstrade.org/ctc/wp-content/uploads/2011/05/20100701_howtomakeanamericanjob_bloombergopinion.pdf], Andy Grove, cofounder and former CEO of Intel, spoke of the fear he and other company officials had in confronting their board of directors and “investors” with the need for more capital investment.  According to the Imperial view, short term shareholder value is primary; meanwhile, the mission of the company, product improvement, and the future of the workers—such questions are secondary.  He notes that in 2010 there were fewer American jobs in computer-related manufacturing than in 1975.  Then he tells this shocking story:

Five years ago, a friend joined a large VC [Venture Capital] firm as a partner.  His responsibility was to make sure that all the startups they funded had a “China strategy,” meaning a plan to move what jobs they could to China.

The City of London/Wall Street financier-imposed destruction was not an inevitable accident.  It was deliberate!  While some involved with such anti-American financial operations are probably just predatory low-lifes, Lyndon LaRouche repeatedly pointed out that the entire purpose of what passes for economics or “business” administration theory and practice, is to wipe out the United States and American methods globally, and thereby allow for the complete restoration of the permanent steady-state British Empire.

Like Lincoln, we will overrule anti-American private and imperial interests.  (See LaRouche’s Four Laws) The Congress will authorize the Treasury to issue currency notes (or credit) in amounts over time commensurate with the requirements created by items two (mentioned above) and three in the LaRouchePAC Resolution to Re-Americanize the Economy. The third is: Pushing the frontiers of science and technology, led by fusion and space technologies.

We will again regulate the private banking system under a restored Glass-Steagall Act, so that speculative investment banking is separated from commercial banking and the various forms of Federal Deposit Insurance.  Speculation will be dried out, and there will be no more bailouts for speculators.

At the same time that we again get control of the dollar and tie it to the future productive potential of the country, we must get at least the minimum of Russia, China and India, plus other interested parties to agree to formation of a New Bretton Woods international fixed exchange rate credit system to allow for long-term loans on international trade in expensive capital goods, and to dry out the remaining speculative activities in currency trading.  In other words, as was the case before 1971, governments agree to maintain policies which keep their currencies in a constant long-term stable relationship with the dollar.  So if an airline from country x decides to buy four Boeing aircraft and gets a 20-year loan for a billion dollars, both the debtor and the creditor know that the debtor will be able to pay, and that the creditor will receive, more or less the value agreed to at the time of purchase--despite the fact that the airline from country x will pay in its own currency rather than dollars.

It is an old imperial racket to loan a country some money for whatever purpose, and then destroy the value of the country’s currency to the point of making repayment impossible--and finally demand payment in the actual physical assets of the nation—mines, canals, etc.  That is also how the empire wipes out markets for American capital goods by impoverishing our customers.

As you speak with people about the Resolution to Re-Americanize the Economy, bear this history in mind, but don’t worry too much about the details at first.  The underlying principles are simple:  We will promote measures which unleash the creative powers of our citizenry and protect the vulnerable.  In historical terms it is the “pursuit of happiness” and the “promotion of the General Welfare.”  Secondly, we will tax, penalize or criminalize actions which loot the citizenry or undermine or degrade their mental and productive powers.  As we successfully apply this approach at home, we will find that more and more nations will happily move in this direction too.

President Trump is right:  the future does belong to the patriots, not the globalists!