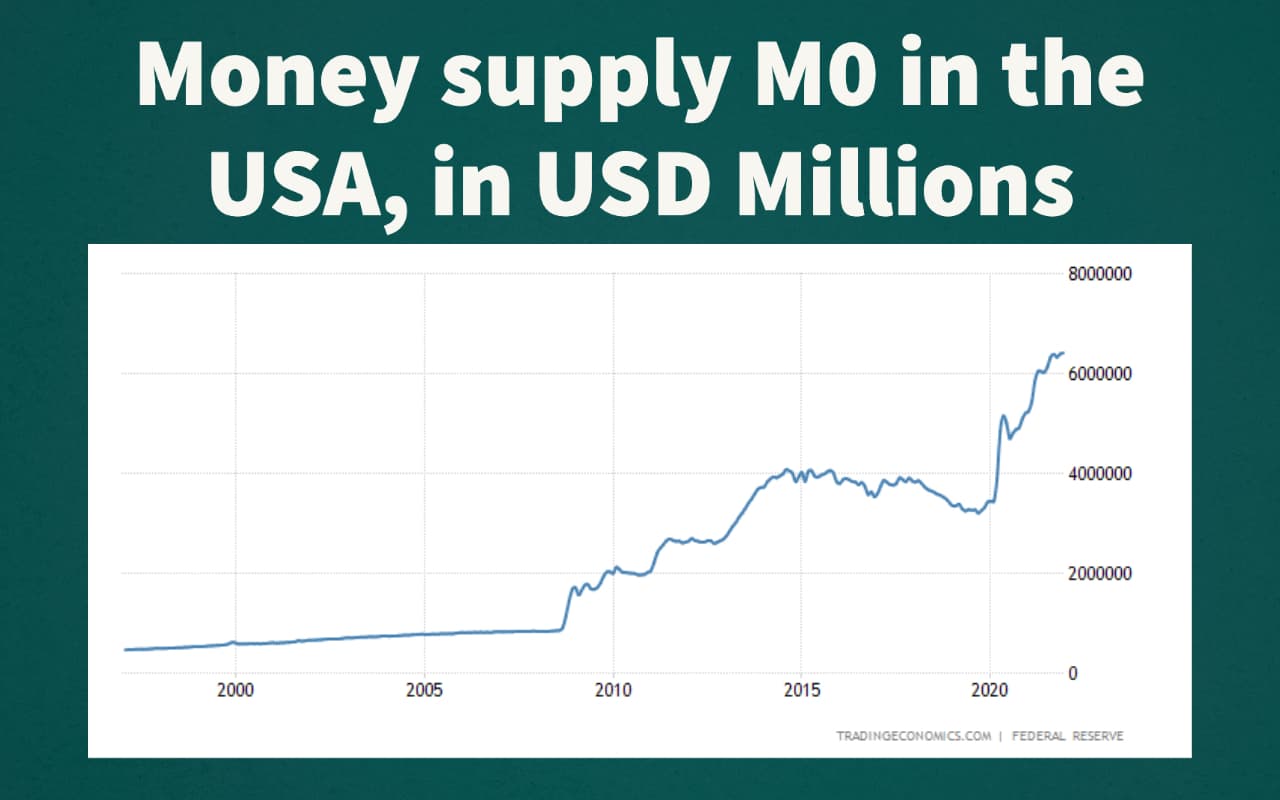 The United States Money Supply M0 is the most liquid measure of the money supply including coins and notes in circulation and other assets that are easily convertible into cash.

This article is the fifth in our new campaign, "The Decisive Battle in the War for the Republic, Put the Fed Into Bankruptcy; Create the Third National Bank."

Jay Powell is a man in a pickle. For the last fourteen years, Powell, his predecessors, and his colleagues at central banks worldwide have pumped trillions of dollars, euros, yen and other currencies into the financial system, supposedly to stave off financial collapse, a process that accelerated dramatically with the onset of the pandemic in February-March 2020.

Most of that money went into inflating financial assets, bank balance sheets and new and exotic instruments, from digital so-called currencies, to complex debt instruments and investments into digital based service-companies. In other words, it went into pumping up the unearned gambling wealth of the predators who profited from the economic blowout which they caused in 2007-2008.  Relative crumbs were invested in manufacturing, modern infrastructure, advanced energy, research and development and technological expansion, the drivers of actual economic growth.

Yet the money printing kept coming.

The only partial exception was the increased investment into productive enterprises during the Trump administration, primarily due to Trump’s science-based rejection of the climate change hoax, his commitment to energy independence, the rollback of anti-growth environmental regulations, and other anti-bureaucratic measures. Trump’s commitment to increased military spending promoted some investment in advanced technology, but the corrupt defense industry siphoned off much of what could otherwise have been directed to advanced R&D.

The outstanding exception here was Trump’s commitment to the Artemis program and U.S. development in space, which the corrupt military-industrial-financial complex did their upmost to disrupt. Though Trump may have intended his tax-cuts to prompt reinvestment in capital goods and R&D, which they partially did, Wall Street Republicans in Congress, with the full support of central bankers, made sure that Wall Street financial instruments reaped the major benefit.

Even this came to a screeching halt with the Covid-19 lockdowns and the Biden collective’s imposition of Davos’ Build-Back-Better/green race back to global feudalism.

The result: raging inflation, production shortages of basic commodities and manufactured goods, and a financial bubble that is teetering on the verge of a blowout.

For months, Powell, with a shit-eating grin, tried to assure the credulous that this situation was “transitory.” No longer able to maintain this illusion, he “retired” that term after being renominated to his post by Biden. On January 26, after the Fed’s first meeting of 2022, Powell went before the world and, with his best “aw shucks” demeanor, told the world that the Fed will take care of everything by raising interest rates, ending asset purchases, and reducing the Fed’s balance sheet, in an effort to drain some of the massive quantity of printed money out of the financial system.

It won’t work. Powell and his colleagues probably know this, but won’t say it. Raising interest rates will only profit the Wall Street and London megabanks which dictate Fed policy and add to the cost of investment, i.e., it will fuel inflation, as well as deflate some of the asset-bubbles such as real estate. Though that might seem good for prospective home buyers, it will do nothing to bring down the cost of paying a mortgage or paying rent.

Without a rollback of Biden’s green agenda, energy production won’t increase, and oil and gas prices will continue to climb. Biden’s preference for low density “green” energy, such as solar and wind, instead of nuclear, further exacerbates the problem. Without de-finacializing the agricultural sector, food prices for the consumer will continue to rise, and prices paid to farmers and ranchers will continue to fall, further constricting the availability of affordable food.

In sum, the majority of American citizens will get screwed.

As a loyal subject of the central banking system through which he became rich and powerful, Powell cannot think in any other way. In that sense, he is a tragic figure. But, as Lyndon LaRouche frequently pointed out, the real tragedy in such situations is not the actions and thoughts of the tragic figure, but the system that compels that figure to pursue his, and his society’s doom.

That doom can only be avoided by a break with that system. Central banking, as it is constituted, is designed by, and intended for the sole benefit of the financial and imperial institutions it serves. Thus, it does not, and will not, concern itself with the physical economy. Only a return to the American System of national banking, which is committed to creating and channeling investment into production, research, and technological progress, will enable the American citizenry to apply their creative potential to rescue the economy from the mess that central banks have created.