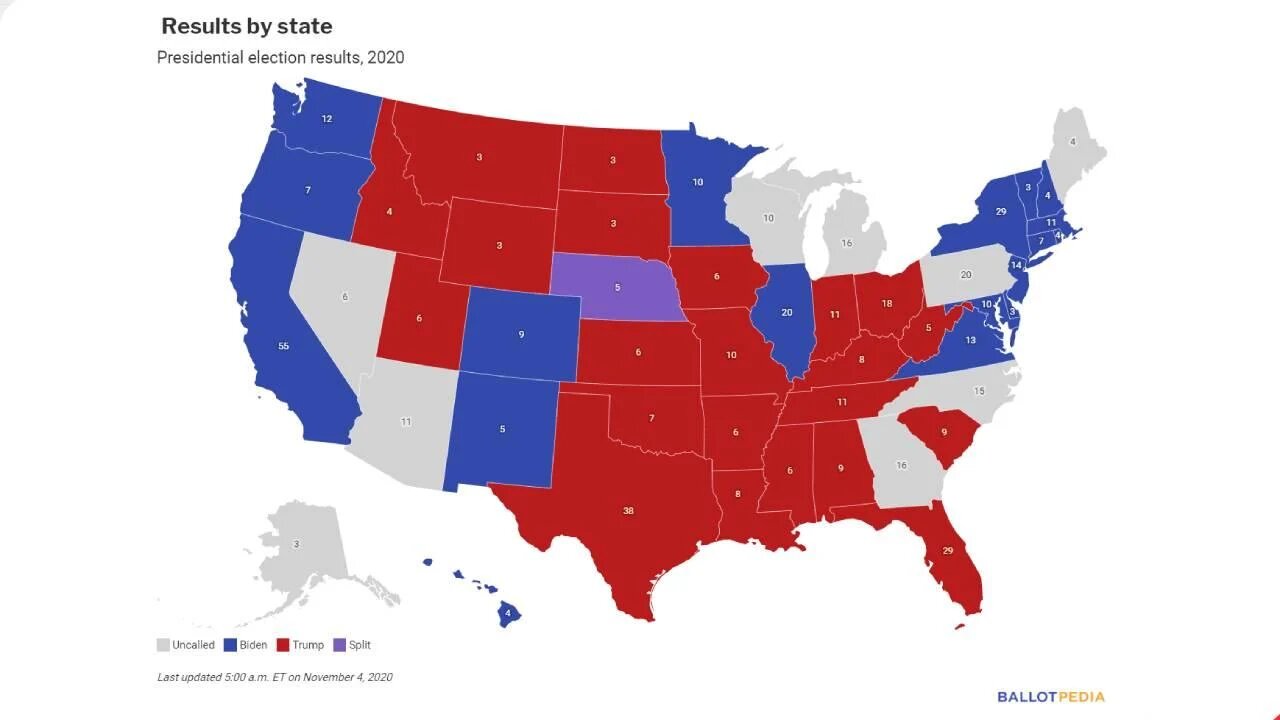 As President Donald Trump’s path to the White House began to be accomplished last night, the counting in Michigan, Wisconsin, and Pennsylvania halted. In all of these states the President was leading. Georgia, where the President was also leading, became delayed by a “water main break.” North Carolina was undeclared despite the President’s lead there. Arizona was called, by Fox, with thousands of votes from election day not even counted. The vote fraud pattern is classic: “Stop everything, slow it down to a snail’s pace, while we figure out how to concoct more votes in the Democrat city–centered precincts we control”—namely, Detroit, Milwaukee, Philadelphia, and Atlanta.

Joe Biden went on TV early, at 12:30 a.m., to declare that he was on track to win the Presidency. This followed statements by the Pennsylvania Attorney General, Josh Shapiro, the man charged by state law with guaranteeing the sanctity of the vote, that Biden would win Pennsylvania based on counting “every vote.” The only problem is that this statement was issued the day before any in- person voting had occurred. It followed Biden himself in a video statement telling voters that he did not “need their votes to win,” he needed their support after he was declared the winner.

President Trump countered with the obvious, that Americans were witnessing a fraud, an embarrassment to the country, before their very eyes. Before the vote was stopped, the President had won the election. Trump was instantaneously condemned by Facebook, Twitter, and Chris Wallace, the apoplectic snake on Fox, along with the entire elite media complex and the insipid RINOs like Chris Christie. The President has vowed to fight and LaRouche PAC will support that fight. As we post this, the fraud is continuing and bending the election toward Biden.

There is a war occurring in the United States. On the one side are our nation’s decadent British-steered elites who have decimated and outsourced this nation’s once-proud industrial base, pacified the population through a drug plague, sent the youth of the working and poor out to fight endless wars for British geopolitical interests, destroying our national honor, while they got filthy rich in the process. On the other are the middle and working classes, and many of the poor who turned out for Donald Trump in 2016 and continue to turn out for him in ever greater numbers. They declare that they love the Constitution and this country and that they love Donald Trump because he fights for them and stands up to the thoroughly rotten would-be rulers of the nation.

Trump’s supporters are in a historic mass strike based on principle, not party. The key to ultimately winning this war depends on their continued commitment to this battle and a deepening of their understanding of the actual roots of the American Revolution and that Revolution’s identity as the realization of the ideas of the European Renaissance. That is the specific role LaRouche PAC will play as we fight this ongoing battle which will not end with the ultimate result of the presidential vote, which now, fraudulently, tilts in Biden’s favor.

Donald Trump has mobilized a movement, and that movement is now engaged in a mass strike. Trump’s supporters have learned that this battle requires a steely determination never to give up, always to fight, and a vision of where the future lies. President Trump’s invocation of the space program to revive the economy and his recognition of optimism as an actual physical force in the universe are the most important elements of what he has energized.

So far, the elites have used the corrupt intelligence agencies of the nation to spy on Trump’s 2016 presidential campaign, and to engage in sedition throughout his presidency, including multiple bogus criminal investigations and frame-ups using the court system. When that failed, they moved to impeach him based on the fact that he was asking the incoming President of Ukraine about Joe Biden’s obvious corruption in Ukraine, corruption so well known in Washington gossip circles that Hillary Clinton threatened Biden with exposing it to prevent him from running against her in 2016. When that failed, they totally politicized the response to COVID-19, costing thousands of lives and the public trust. They produced fake poll after fake poll showing an insurmountable lead by the senile hollow man, Joe Biden, to suppress and depress the Trump vote.

The media and Silicon Valley have been in this game from the moment Trump announced his run for the Presidency, pumping out an endless stream of hatred against Trump and anyone supporting him and turning this nation, if they prevail, into a soft totalitarian fascist state. They have produced a would-be President who is senile, and a would-be Vice-President who is a walking example of what happens to the brain when exposed to too much dope. The elites hope to control the United States through them. But it is a weak strategy, and as Lyndon LaRouche would say, a doomed one, because it is not at all consistent with the laws of the universe.

For the election itself, they spent billions of dollars to defeat this President and to win the House and the Senate in their attempt to establish a one-party state. So intense was this drive that millions were spent on trying to take the Texas State House. Mike Bloomberg, personally, dropped $100 million on Florida alone. They mobilized riots throughout the country after George Floyd was killed in support of the fake idea that the President was a racist. Should the election move in the President’s favor, this apparatus is poised to move to burn the nation’s cities down and to shut down the government. Should the presidential election be stolen by Biden, they will steer infiltrated organizations to violence in the hopes of completely discrediting and destroying the nascent Trump movement.

So far, Republicans have maintained their control of the Senate and have gained four House seats, but with the House still in Democratic hands. However, without the continued political fight of Donald Trump and the movement he leads, this is weak sauce indeed, despite the fact that Donald Trump largely carried all the key Republican Senators at risk over the finish line. LaRouche PAC will have further updates as we analyze this election further.