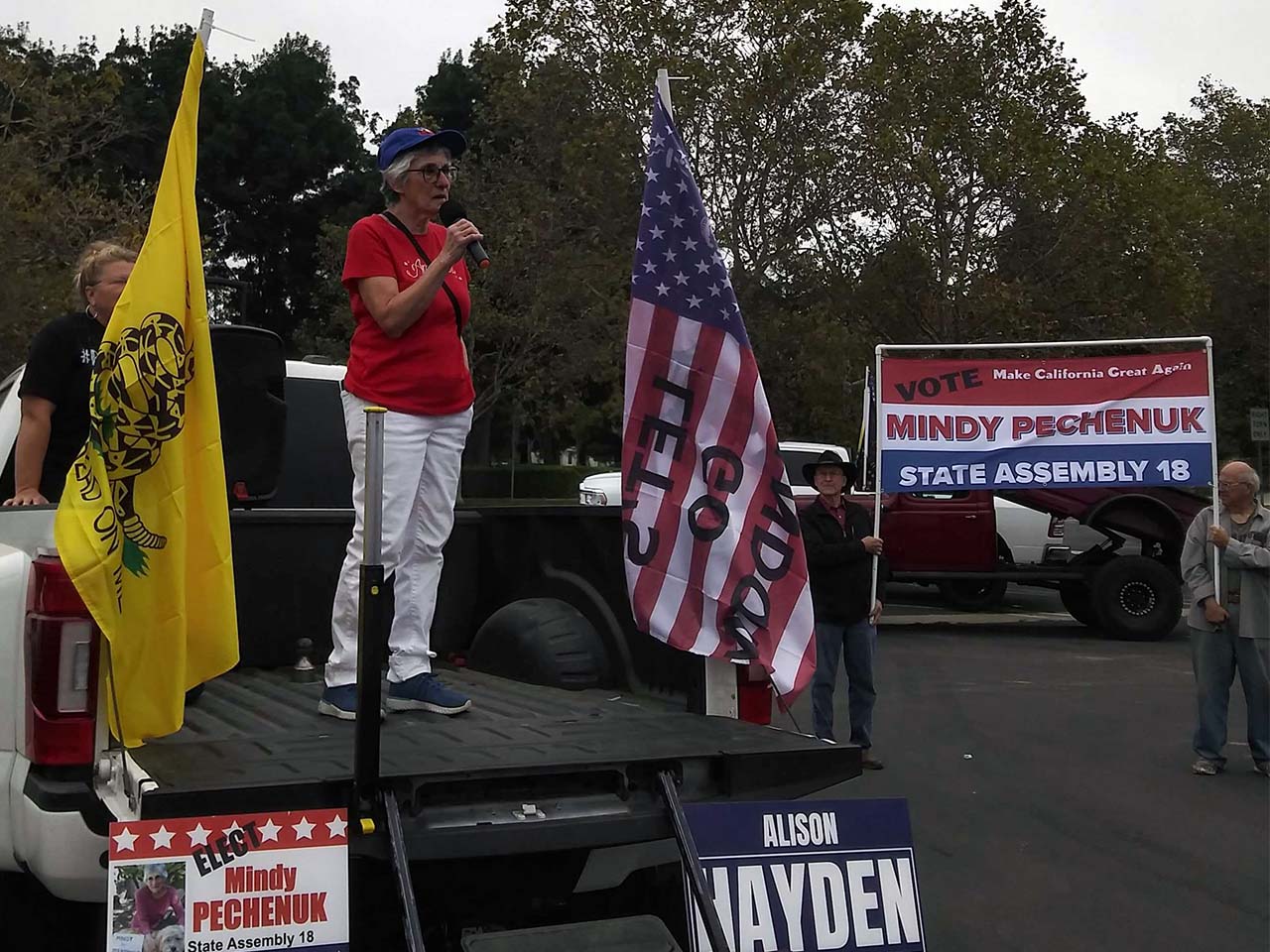 The Battle for California AD 18—LaRouche PAC Bulletin No. 3

The week of October 10-16 found Mindy Pechenuk and her volunteers staging rallies throughout the District, holding a campaign meet and greet, and ending the week at the Save America Truck Rally in Pleasanton, California.

Friday’s campaign meet and greet brought together citizens assembled for the in-person event and others on Zoom.  The candidate opened her presentation with a challenging subjective question to the audience: “How did we get to where we are today. Is it because the oligarchical modern British Empire is so strong or all-knowing? Think about what you were doing in the 1970s, the 1980s, the 1990s and 2000s when the key foundations of our present ruin were being laid. Think through what happened at each critical point and how an individual leader could have changed the course of history right then, had they found the passion which we are now finding throughout this aroused population. Now, we face a turning point on November 8th in which the fate of our Republic will be determined.” This led to a very lively discussion about taking up the commitment to fight now with the power of truth and principle, while accepting no excuses, be they noble or bad.

Faiz Alsam, a LaRouche PAC activist from Michigan joined the meeting to report on the school board meeting in Dearborn, Michigan which has featured prominently in the national news. Attended by 1,500 parents—including Muslims, Christians, and African-Americans—a new alliance was born in a raucous meeting protesting the distribution of overt pornography to school children. Faiz’s report reminded meeting participants that they are part of a national fight which is breaking out of all previous political categories and controls and even breaking out “behind enemy lines” in the Golden State.

Andrea Ingraham discussed her work on the history of California and the growth of the Lincoln Republican Party in the state. Pat Ruckert provided a presentation on the current and deliberately created water and power crisis in the state and throughout the Southwest. He noted that “solving this crisis” is not possible through crisis management, the present political leadership, or their failed political ideologies. Instead, we need to take power, employ advanced desalinization, nuclear power, and build large scale water management systems, like the North American Water and Power Alliance. (NAWPA). Lots of discussion ensued regarding the founding of the Republican Party, the nature of a Republic as opposed to a “democracy,” election integrity, and the impact of water cycles and evaporation on the weather.

The Pleasanton Save America Truck Rally had about 100 citizens with their American and Trump flags. Mindy was there with her campaign—in force. The candidates attending addressed the crowd. before the rally’s trucks and cars paraded through Pleasanton and Livermore, California,  In addition to Mindy, Alison Hayden running for Congress in the 15th C.D. against Eric Swalwell, Joe Rubay running for State Assembly against Rebecca Baurer-Kahan, and Alex Izarraraz running for Livermore School Board attended the rally. Self-described State Assembly “member” Mia Bonta is the incumbent in A.D. 18 and has adopted the strategy of Democrats throughout the country—hide in your basement, refuse to debate, and hope that the “fix” is not overwhelmed by the rising and angered populace.

In her address, Mindy made it clear at the outset that she stands with Donald Trump and the need to stop WWIII. She emphasized that we have to address the causes of problems, not the symptoms. She focused first on the crisis in education. “What is the most precious wealth of our nation,” she asked. “It is the minds of our children, the future of humanity. We need classical education,” Pechenuk continued. She advocated setting up choirs from kindergarten onward, teaching Shakespeare, as well as real science—not the green agenda. This was very well received as many in the audience nodded their heads in agreement.

Mindy gave the same treatment—identifying the real causes and solutions—to the ongoing financial collapse.  The Federal Reserve must be abolished and sovereignty over credit returned to the people where it can be directed to building productive capacity, like nuclear power and desalinization plants, rather than supporting the speculative casino economy which is now collapsing. If the Federal Reserve is not abolished and the country not returned to the national banking policies of Hamilton and Lincoln, you will never fix any of the problems facing mankind. She challenged her fellow patriots to be 24/7 in the fight to build a movement.  We need a new Republican party, she concluded, that is not a corrupt UniParty.

There was great support and discussion throughout the rally and the Truck Rally’s parade through Pleasanton-Livermore. The campaign ended up at a local Mexican Restaurant where discussions went on for many more hours.