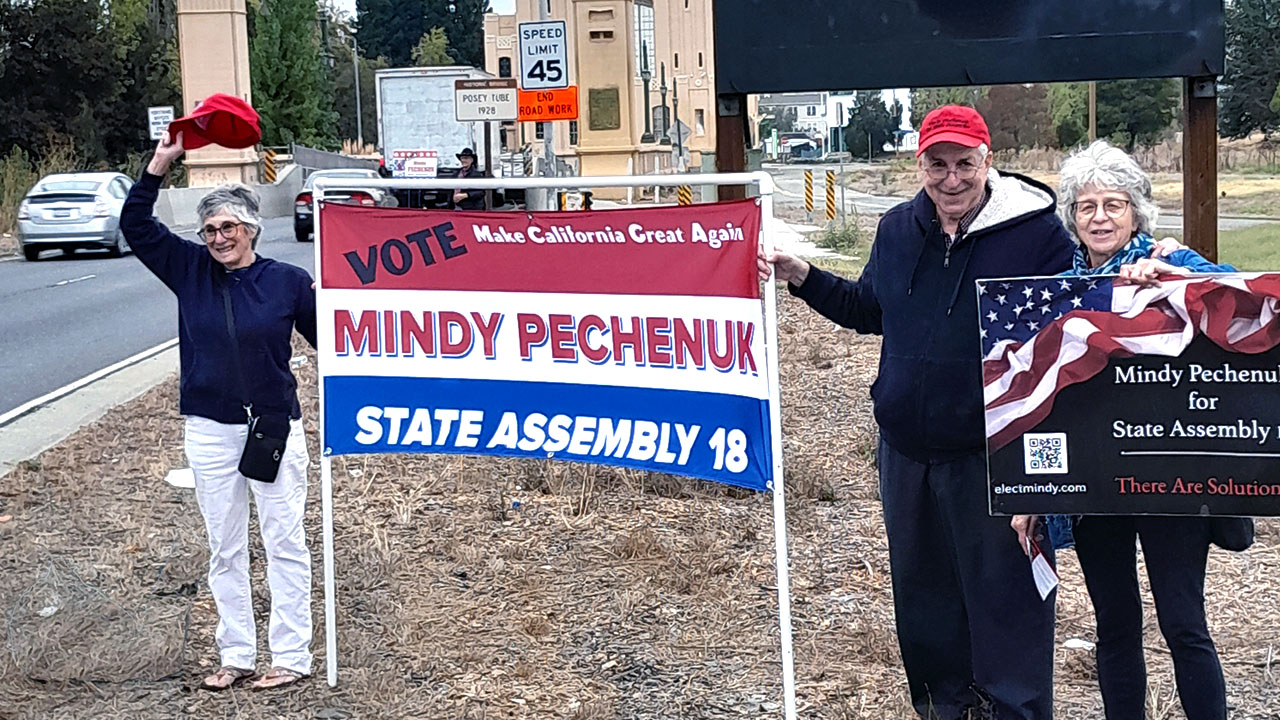 With the results still being counted, as of this writing, Mindy Pechenuk is running at 13.1 %, the highest result ever achieved by a Republican running against either Rob or Mia Bonta in the 18th Assembly District. This is particularly striking since Mindy only campaigned from July 15, 2022 forward and had no significant financial resources or backing.

In a statement posted to her website, Pechenuk said, “I want to thank all those who voted and worked for my campaign to deliver the necessary change in policy to make California a great productive state contributing to the growth of our nation and all humanity. . . I am counting on all the readers of this message to continue to work with me to ensure that those in charge carry out the policies that I stand for. I will not concede this election, nor will I stop running for office. I need you in the fight with me to build the movement that we need, which is why I will never concede. We are created in the image of God, to create the future through the beautiful creative mind that we are given. Only mankind can consciously create its own future; no animal can do this. Our journey has just begun.”

In her campaign, Pechenuk proposed concrete solutions to the major problems driving people from the Golden State: economic distress and dislocation, the drought and water crisis, homelessness, and crime. She proposed abolishing the Federal Reserve and going back to a national banking system, removing the monetarist monster stifling economic growth while creating the basis for credit to flow to the transformative productive projects necessary to sustain and grow a modern agro-industrial economy. By shutting down the drug cartel and its financier enablers, the twin crises of homelessness and crime would be on the way to solution while the state could again produce all the food, water, and energy its citizens need.

The last week of the campaign started in the Fruitvale area of Oakland where the campaign participated in events sponsored by the Oakland Latino Chamber of Commerce, the Alameda County Latino Chamber of Commerce, and the campaign of Ignacio De LaFuente who was running to be Oakland’s Mayor. On Friday, the campaign held a rally at the Fruitvale BART Station and also attended an event commemorating former Alameda County Supervisor Wilma Chan in Oakland. Chan was the first Asian-American elected to the Alameda Board of Supervisors and was killed when hit by a car while walking her dog about a year ago. She is revered in the Asian-American community, and the event was the renaming of Madison Park in Chinatown after her.

On Sunday, Mindy's friends and teams walked the district, covering Alameda, Oakland, and Emeryville. Once again people came up and proudly noted that they had already voted for Mindy. Others said that, “We need to end the Bonta dynasty.” Mia Bonta hid from her constituents throughout the campaign repeating Joe Biden’s “hide in your basement and count on the media and social media to brainwash, and wealthy donors to bribe” strategy. As she noted on her website; “This is why Mindy is building a movement of the citizens, we need to take leadership. Those in office have shown their intention to destroy the future of our children and generations to come with their green zero carbon agenda, drugs, and no rebuilding of our industry, agriculture, and small and medium businesses. Through the campaign I have received support to lead the fight to make California become productive by building nuclear power and desalination plants, creating skilled jobs, and the training necessary to work them. The citizens of my district want to have a mission for greatness, and are with me in understanding that aspiring to greatness is the key to stopping crime, homelessness, and the destruction of the minds of our children.”

Throughout the week Pechenuk, many members of the Alameda Republican Central Committee Election Integrity team, and Jason Bezos, the lawyer for the Alameda County Taxpayers Association (ACTA,) spent hours at the Alameda Register of Voters observing the processing of the mail-in ballots. The Alameda ROV (Register of Voters) has violated the election codes 15104 and 15204 of California and has not given "sufficient access" to the observers in almost all cases. The Alameda ROV has also violated the California Voters Bill of Rights, code 2300. This team testified last week at the meeting of the Board of Supervisors. Pechenuk has called for the appointed head of the Alameda ROV, Tim Dupuis, to be removed from his duties and re-assigned immediately. As of this writing, Mr. Dupuis is still the appointed head of the Alameda ROV. Pechenuk and others sent letters documenting these violations to the Civil Grand Jury of Alameda California. On election night and throughout the week as the ballots continue to be counted, the campaign had teams stationed at the Alameda ROV. They are still denied "sufficient access" to fully observe the counting process of the ballots and have observed questionable violations of election practices.