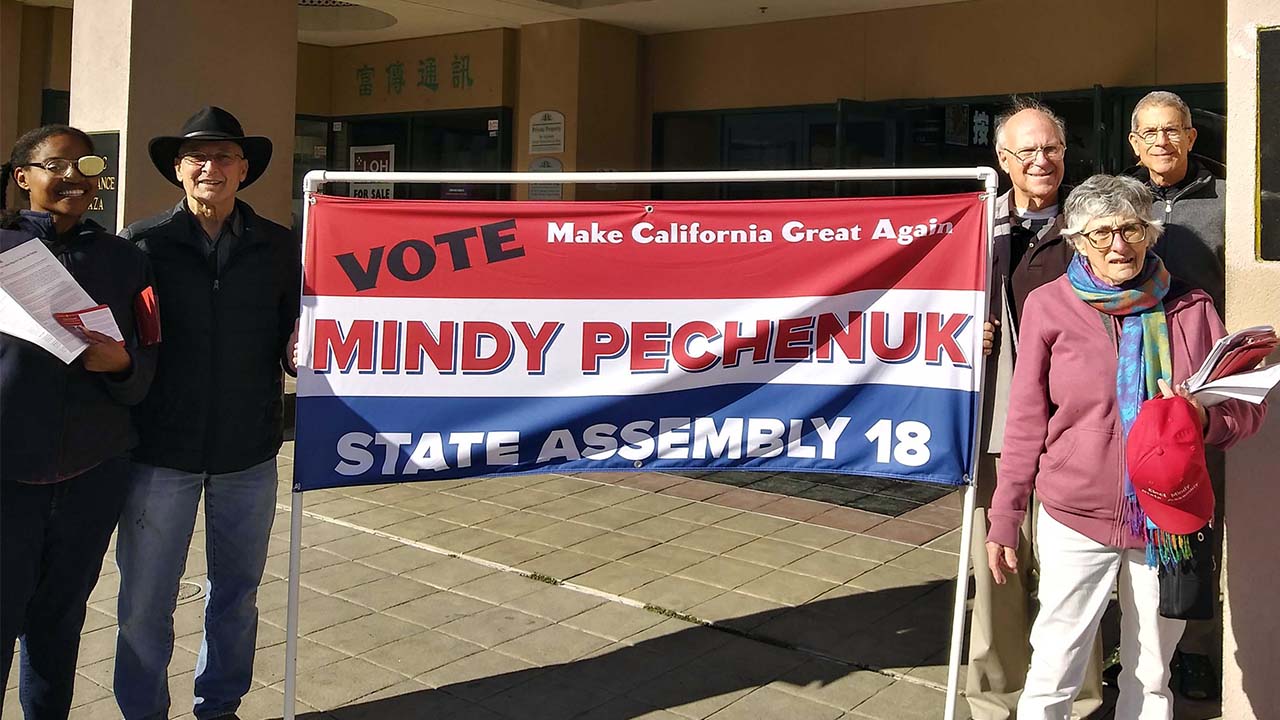 “One thing can be said for my opponent Mia Bonta, Mia is Missing In Action!”

With her opponent literally nowhere to be found, Mindy and her volunteers took to the streets aggressively last week, visiting a wide variety of areas in the district and finding an excited response from citizens. They could actually see and speak with the candidate herself on traffic islands, in rallies, on walking tours, and at events. By contrast, Mia Bonta, early in the campaign, rejected the League of Women Voters’ offer to sponsor a debate with Mindy, and has since adopted the “hide in the basement” strategy adopted by Joe Biden and his fellow fraudsters. This, despite the fact that as a sitting assembly “member” she owes it to her constituents to show herself and talk with them about their very deep concerns about the economic breakdown, drugs, and the overwhelming homelessness in the district.

Many rallies were held by the campaign, including in Alameda and Oakland’s China Town. A mosque was visited in Alameda, and teams of friends walked throughout the district on Sunday. People said that they had already voted for Mindy or would vote for her. Community organizers met from the churches and homeless organizations are enthusiastic about getting active beyond this election. The need to have a productive country and state with a mission was universally recognized, along with the obvious fact that the current leadership is deliberately refusing to discuss real solutions.

In Alameda, the rallies featured tables festive with “Elect Mindy,” “Trump Won,” and campaign material where Mindy’s volunteers reported an excellent and, in many ways, unanticipated deep and positive response.

Three volunteers went to the Alameda Mosque and once again encountered a mobilized Muslim community ready to fight for their children and high educational and classical values against the indoctrination in degenerate culture now featured in public schools. The devotion to this cause is similar to that reported in Dearborn, Michigan and elsewhere in Oakland’s 18th.

On Saturday there was a lively rally as the campaign walked throughout Oakland’s historic Chinatown. This area has been collapsed as the result of the BLM rioting here and the COVID lockdowns. Early in the campaign, Mindy had spoken to the Chinese Chamber of Commerce and addressed the needed rebuilding of Oakland’s Chinatown. Her address centered on making the state and nation productive again by abolishing the Federal Reserve and replacing it with national banking dedicated solely to productive enterprise. That includes shutting down the drug cartels and prosecuting those in power who support them.

On Sunday, the campaign conducted three walking tours in Emeryville, Alameda, and Oakland. In depth conversations were held with many and recognition of the campaign was remarkable.

On Tuesday, November 1st, Mindy issued a dramatic call  for the reassignment of the Alameda Registrar of Voters, Tim Dupuis. She testified before the Alameda County Board of Supervisors Regular Meeting on November 2nd, concerning this demand. She was accompanied by Alison Hayden, Republican Candidate for Congress against Eric Swalwell in C.D. 14 and six other members of the Alameda Republican Central Committee Election Integrity team.

Dupuis has become notorious in the Bay Area, including recent front page stories in the San Jose Mercury News and East Bay Times as well as feature coverage on CBS San Francisco for massive failures to disqualify illegal ballots postmarked after election day. This violates state law. According to the Alameda County Taxpayers Association and their attorney, as far back as the November 2020 vote concerning Proposition W, Dupuis “padded the vote totals” after all ballots had presumably been tallied and the proposition to increase the sales tax had been defeated. But, “voilà,” Dupuis found enough “yes” ballots in overtime to push the tax increase proposition through.

Scores of activists throughout the Bay Area have taken notice and been emboldened by Mindy's Campaign to get active.  Many of them are contrasting Mindy's drive for integrity of the vote to the California Republican Party's failures to take legal and other actions to prevent fraud.

This week Mindy and members of the Alameda Republican Central Committee Election Integrity team, went to the Alameda County Registrar of Voters to observe the mail-in-ballot signature verification and the opening of the mail in ballots. We were not able to adequately observe everything we needed to see. This follows on an earlier attempt to observe by Jason Bezis, a lawyer for the Alameda County Taxpayers Association. When Bezis questioned Tim Dupuis about observers’ rights, Dupuis called the Sheriff’s office on the lawyer. This underlines the urgency of replacing Dupuis with someone who will enforce California’s laws about mail-in-vote counting and the rights of observers. In addition, legal action must be taken if this election is to be secure.