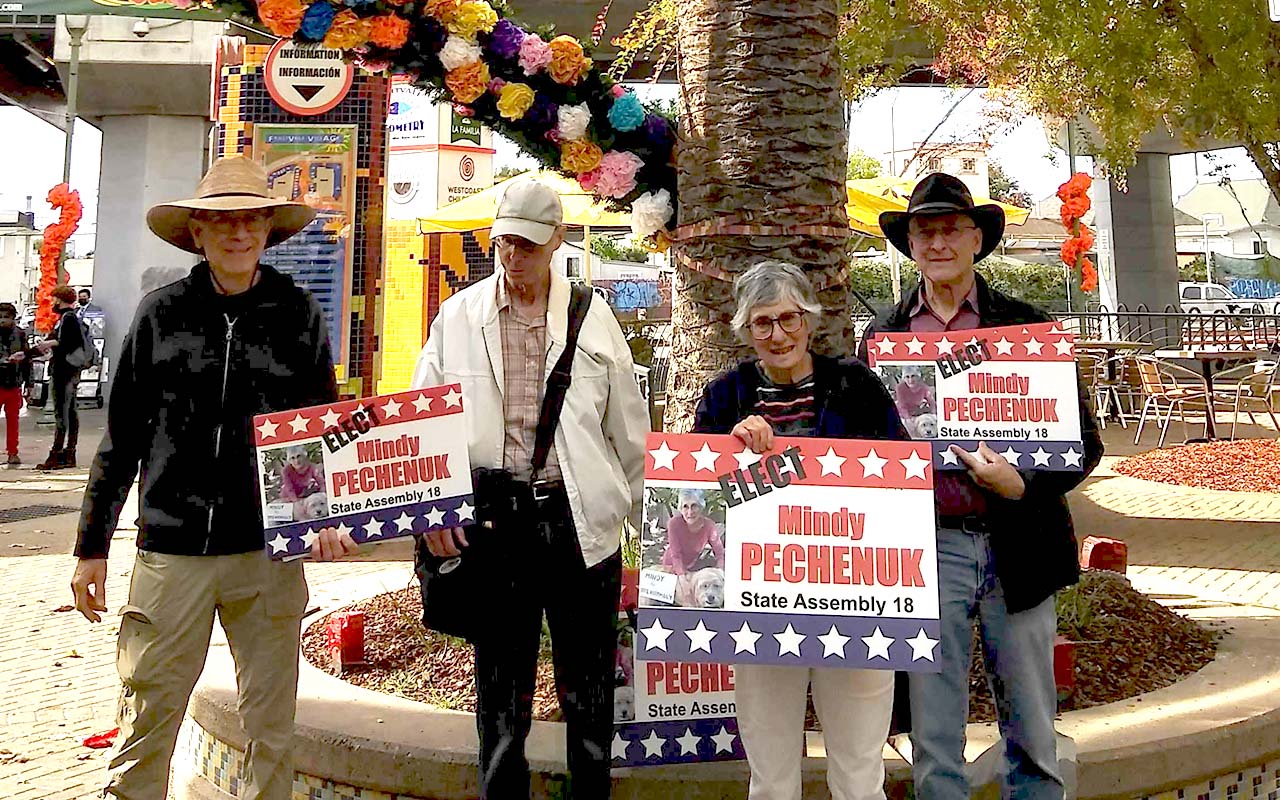 In My District Everyone is a Forgotten Man or Woman

This week Mindy campaigned across the 18th Assembly District, going everywhere from Bay Farm Island in Alameda, to an Oakland mosque, to the historically Hispanic Fruitvale District in Oakland. Across every demographic the issues were the same, the collapsing economy, crime and cultural decadence, homelessness, and their mounting corrosive and destructive impact not only on the present but on the future. What kind of future are we creating for our children? was a question seemingly at the front of everyone’s mind.

In addition, Mindy led a fight within the Alameda Republican Central Committee which succeeded in passing a resolution endorsing Donald Trump’s offer to negotiate a settlement to the Ukraine War.  Immediately ending this catastrophic and increasingly dangerous war is also a primary campaign plank for Pechenuk.

The week began with a morning rush hour rally in Bay Farm Island. There was good recognition of the campaign with some people volunteering that they are voting for Mindy.

On Wednesday, Mindy attended the Alameda Republican Central Committee meeting. Despite initial opposition from the Central Committee leadership, who are allergic to the name, “Trump,” the resolution introduced by Mindy and Hunter Cobb passed by a 2/3 vote. This reflects national sentiment in the Republican Party where support for the war is tanking and Tulsi Gabbard, having left the “warmonger” Democratic Party, is leading a full Red State and potential Red State mobilization against the War. This, as the war looms ever more dangerous for the human race and retired General David Petraeus now leads a Washington mobilization for direct U.S. involvement in the war.

On Friday, the campaign visited one of Oakland’s mosques. Congregants there were fully aware of the Dearborn, Michigan School Board meeting which had made the national news. In Dearborn, Muslim fathers led a coalition of parents across all religious groups fighting against the public schools’ delivery of pornographic books to their children. Here, the teaching of transgenderism and other sexual practices in the schools has proved just as abhorrent to parents.  Many echoed the sentiment of one man who told Mindy, “God created man and woman, not to be changed, and school is to develop our children's minds.”

On Saturday Mindy’s campaign went to the Fruitvale district in Oakland. This is a historically Hispanic area, totally neglected by Mindy’s opponent, Mia "Missing In Action" Bonta. Mindy walked through the shopping district with her campaign team of Andrea Ingraham, Ned Nuerge, Richard Iaria, and Hunter Cobb, engaging many in their native Spanish language. The message here was also totally clear: end the crime, the drugs, and the filth that now lines the streets. We want productive lives.

Sunday, found Mindy and her team at a campaign event for Ignacio De La Fuente, sponsored by Californians For Safer Streets. De La Fuente, a former Oakland City Council president, who used to represent the Fruitvale District on the Oakland City Council, is now running for mayor on a platform of ending crime and homelessness. He has come out of retirement to do so, citing the desperation of the forgotten men and women of this city and their demands for an end to the present chaos. This is the same sentiment encountered by Mindy’s campaign.

In a recent CBS interview, De La Fuente, who describes himself as a “moderate Democrat,” said “We are in deep, deep trouble . . . . I believe the city has gone into a hole that I think we're going to have a hard time digging out of. . . . I came to this city 51 years ago with not a penny in my pocket, and not even speaking the language. And Oakland embraced me, from a dishwasher, to a machinist, to a labor leader, to a city councilman. . . . I told people that I’m ready to be a very unpopular mayor because the next mayor is going to be an unpopular mayor if he or she does her job.” The event provided a very good opportunity to compare notes and to speak directly with the forgotten men and women whom both candidates seek to represent.